My own take on "Rock the Casbah" by the Clash.  And the song that kept going through my head as we were discussing installing the crash bars on the Versys.

Sometime before Christmas we ordered a T-Rex Racing skid plate and SW Motech Crash Bars for my Versys 300x.  While the skid plate arrived right away, the crash bars didn't arrive until a week or so ago.  Last Saturday after coffee, we finally got around to installing them.

Please note before you continue reading that the skid plate and crash bars are the cleanest part of the bike.  It hasn't had a bath since.......ever.  No spa days in sight either since it is still winter.

It was fairly easy to install - 3 brackets and a few bolts all provided.  The brackets weren't labelled and there were no paper instructions, but there was a video online that we referenced. The lower plastic cover on one side was removed for the oil change, so there wasn't as much prep work.  The skid plate also uses existing mounting points and they provide new bolts.

Next up were the crash bars.  Two pieces and a little bag of install necessities.  I must say that I was impressed with how well packaged these were when they arrived.  Inside the box everything was double wrapped in bubble wrap and taped closed.  No way were they even going to get a scratch before arriving.


Luckily the bars came with paper instructions.  The hardest part was breaking loose the main engine bolt.  Even the impact driver didn't want to loosen it.  Luckily Troubadour finally muscled it loose and from there it wasn't hard at all.  Unscrew this, take out old bolt, add a spacer and new bolt/washer..... rinse, repeat.....

And, I couldn't forget to thank my mechanic and handyman extraordinaire.......he prefers scones. This time it was cardamon with crystallized ginger and dates.  Yumm. 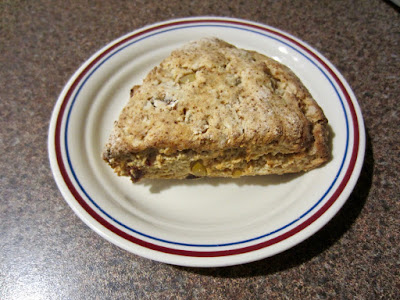 Now I just need another nice day to get out and ride.  Alas, it is still winter.

" Winter is the season in which people try to keep the house as warm as it was in the summer, when they complained about the heat." - Author Unknown
.
Posted by Trobairitz at 4:18 PM 27 comments:

So far we have lucked out with the recent weather in Oregon.  While it is winter, we haven't had any snow in Corvallis and the days of rain have definitely been less frequent than last year.  We'd been eyeing the weather forecast for this weekend and following three days of pretty good rain were a few days of sunshine.

We made a plan to ride to coffee and then tootle around some gravel roads after and see where the day would take us.

We left the house just after 9 am.  The temperature was 44˚F (6.6˚C) and the fog was thick.  The 5 mile ride to coffee wasn't that pleasant.  I had my yellow lensed glasses on to see better but the condensation on the visor (and my glasses) by the time we got to coffee was not fun.

We took the back roads to Philomath and then headed west to Woods Creek Road.  It is a road we know well and enjoy its gravel and elevation changes. We meander up then down.  I usually worry about the downhill side as it doesn't see a lot of sun and can be quite muddy.  This time it was the uphill climb that was rather muddy, but the downhill side was fine. There were a few large puddles, probably the largest I've ever ridden through.  Nice to know my Sidi Livia Rain boots are still waterproof after all these years.  Jeff found out the hard way that his boots weren't quite sealed.

We made a few turns and stopped at a clearing where we've stopped a few times before.  It gave the guys a chance to water the tree stumps and take a break.  We were on a ridge so we could see the other hills around us.

While we were here a gentleman rode up on his Triumph Scrambler Street.  Nice looking bike. We chatted for a bit and before he left Lefty asks him to take a group photo of us.


From the clearing we rode into Burnt Woods where we could stop for fuel. Well, Lefty and I needed fuel, Troubadour has a Clark tank on his DRZ and Polar Bear's Tiger is a fuel tanker so they were good.

At Burt Woods we turned East onto Highway 20 for two miles and then turned North on Clem Road. I was last out this way in May 2016.  In fact it was just after Clem Road when I hit reserve on the TW and was almost out of gas. (Notice I fuelled up at Burnt Woods this time).  I wrote about that ride HERE.

It was a mile or so up Clem Road when the ride went a little pear shaped.  We were headed uphill after a left hand corner when I heard a loud "bang" and then nothing.  The bike was running but I had no forward momentum.  I called to Troubadour and Lefty on the Sena radios that I was stopped.  Polar Bear rode up behind me and said my chain had come off.  I said "my chain came off?"  Which the other guys heard in their helmets and turned around.  Polar Bear's battery had died on his Sena so they couldn't hear him talking to me.

I was sitting there with my hand on the front break not wanting to lift my foot off the muddy road to use the back brake. Troubadour had to steady the bike while I put the kickstand down and could get off the bike.  Nothing like being stuck uphill on a muddy road between two blind corners and the road doesn't have a shoulder.  I can't think of a safer spot, can you?

While I was unlucky that the chain came off, I was lucky in two things:  1) the chain didn't come off at highway speeds a few short miles before; and 2) it didn't come completely off and kill the bike.  Troubadour has a nice little tool kit on his DRZ so the guys went to work.

The guys got my bike race ready - thank you gentlemen and we motored forward.  I couldn't believe in the time we were there not one vehicle came down that road.  Last time we were on it there was quite a bit of traffic.  Luck was on our side.

We linked up more gravel roads and took the back way into Fort Hoskins, where we used the restroom facilities and had a snack.  It was about 2:30 by this time.  Our destination was the Yeasty Beasty pizza place in Monmouth.  You may remember that name from our Polar Bear ride two years ago.  You can read that post HERE. Because of the time of day we decided not to take the longer gravel route, but to take some tarmac into Monmouth.

We arrived and found parking out front.  It was now 3:30 so Polar Bear said his goodbyes. He had a longer ride home and was chasing daylight.  Troubadour, Lefty, and I went in for a bite of pizza. The food was not great, but we were hungry.


While eating we discussed the best way to head home.  We were heading south to Corvallis, but Lefty was heading back to Albany, which is about 11 miles east of Corvallis. We decided to head back the way we came on Helmick Road until it intersected again with Highway 99.  Our goal was to do as little of the highway as possible and in that we succeeded.  After linking with Highway 99 we went about a block south and Lefty turned left onto Suver Road and we turned right onto Airlie Road.  About a mile in we stopped at De Armond Rd (a gravel road of course). We have passed that road a lot of times before, but we weren't sure where it went.

When stopped Troubadour checked the map on his phone, while I took a few pictures.

I am pretty good remembering directions so Troubadour read them off to me - right on Rifle Range Road, right on Coffin Butte Road and left on Tampico Road, which would take us back to Highway 99 just a lot further south and mostly gravel.  Got it.  It was a nice little route that we will take in the future.  We popped out on Hwy 99 and continued to leapfrog side roads all the way into Corvallis.  It was just getting dark when we got to town.

No one got hurt and everyone made it home safe.  I think everyone might be checking their chain tension today though.

Update:  As linked on Troubadour's blog - Lefty put together a short video montage of part of our ride.  It gives you an idea of some of the terrain.  A link to YouTube HERE.

" People take different roads seeking fulfillment and happiness.  Just because they're not on your road doesn't mean they've gotten lost." - H. Jackson Brown
.
Posted by Trobairitz at 9:58 AM 36 comments: