As some of you may know from facebook, on Sunday a few of us went out for a wee ride in the dirt.

On Saturday afternoon Troubadour and PolarBear went for a mountain bike ride and plans were hatched for a dirt ride on Sunday.  I decided to forego housework and grocery shopping and chose to go ride some dirt instead.  We managed to convince Melissa, fearless instigator leader of our Dam Ride, to join us.  Mel had never ridden off road before so we were curious to know if she would like it.


The guys chose the Santiam Pass Motorized Vehicle Area as the venue of the day.  Here is a link to the trail MAP.  From Corvallis the area is east on Highway 20 and up Tombstone Pass to Santiam Pass.

If you make a right turn (south) at the Hoodoo Ski Area on Big Lake Road it will take you around the ski hill and into the OHV area. 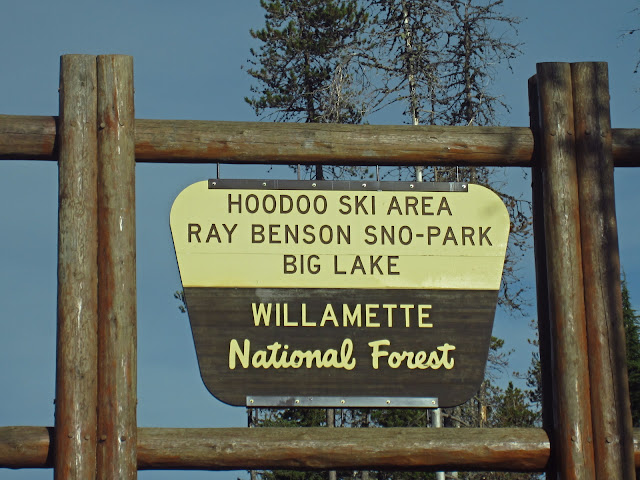 The alarm was set for 6:30 Sunday morning.  We got ourselves ready, had breakfast, and then I packed us a lunch while Troubadour hitched the trailer to the Subaru and loaded the bikes and gear.  We arrived at PolarBear's in Lebanon promptly at 9:30 on schedule.  PolarBear had already loaded three bikes on his trailer and soon we set out to Waterloo to pick up Mel.

We arrived at the staging area just shy of noon.  Traffic wasn't heavy heading up the pass, which was nice and the sun was shining brightly.  I believe it was 50˚F (10˚C) when we left the house. Luckily, as we climbed higher in elevation the sun warmed a little and hovered around 60˚F (15.5˚C) most of the day.

We set off down one road and while looking for the 'green' rated newbie warm up loop PolarBear accidentally led us down the rabbit hole.  Not that it was a bad trail but there were banked corners with loose soil in the bottom and Mel and I weren't quite up for the task at that point. Did we still ride it?  Yes!  Did we fall over and hit the dirt?  Oh yes!  Did we have fun?  I believe we did since we were smiling most of the time and laughing as we picked up bikes.


We eventually found the warm up loop and had quite a bit of fun going around and around through the twist and turns learning to keep our speed up around the banked corners.


The picture above was taken at the entrance to the green learner's loop.  The post over Mel's shoulder is the exit.  When you make the left hand corner to re-ride the loop there was quite a bit of loose soil in the turn.  On one occasion I was stopped at the intersection and went to turn left. I revved the throttle a little too hard and rode up onto the grassy area.  No big deal other than I went to put my foot down on the low side onto the trail.  Not a good plan and over I went ending up flat on my back.  Luckily, not only was the soil really soft, but I was wearing my inflatable chest/back protector so I didn't feel a thing.  Sure wish I had that on camera.

By this time it was 2 pm so we rode back the staging area for lunch.  Peanut butter sandwiches, lunch of champions.


I had one more fall for a total of 3 that day. The guys decided we were good to ride the blue (intermediate) learner's loop.  Same type of banked corner's, some tighter turns and more of an elevation gain/loss.  On my second run through the loop I got a little too much speed in a left hand corner and instead of pressing the bars more I target fixated and rode up the right side of the bank.  The bike slid out from under me.  Again, not hurt.  I think there is an art in falling off a dirt bike so the bike lands away from you and not on you.  On Sunday I seemed to have mastered that. I think Mel must have too as we both had a few get-offs usually in about the same spots.

We rode a little further down the dirt forestry road intending to make it to a viewpoint.  There were trucks out on the road (mostly hunters in their camouflage and orange vests - although why they are allowed to hunt near an OHV area is beyond me).  They were polite and moved over but we still had to squeeze the bikes past them.  At the turn off for the viewpoint the road went up and turned at the top.  PolarBear and Troubadour decided to ride up and scope it out.  I hear a rumor Troubadour tried to ride up a sand pile up there some where, but that might just be an urban legend.

They came back down and decided we'd save it for another day.  We headed back to staging to load up the bikes and strip off all the extra gear.  As we were leaving the park we turned to check out Big Lake campground.  We stopped along the way and took a picture of the Subaru/trailer combination.

The campground looked like a nice spot.  There were a few trailers parked there and a few people milling about.  While we didn't see any bikes or quads, we did see gas cans sitting by trailers which would indicate they were off playing.  Some campsites had kayaks as well so people were there for the water.

We left the campsite and headed back towards the highway.  The photo below is Three Fingered Jack to the north of the ski/riding area.  You can actually see where it is on the map at the beginning of this post.  Three Fingered Jack is a Pleistocene volcano.  Click the name in the caption below for more information.


We arrived home around 6:30 pm and the temperature was a balmy 75˚F (23.8˚C) in the valley.  I went inside to start dinner and Troubadour grabbed a beer bottle of motivation to get the bikes unloaded and trailer put away.


I think we all had a good day and we look forward to doing it again.

" It is the blessing of old friends that you can afford to be stupid with them." - Ralph Waldo Emerson
.
Posted by Trobairitz at 6:00 AM