Long Weekend Quandary - What to do....

Last weekend was a three day holiday weekend.  Friday was the 4th of July, Independence Day, and Troubadour finally had a free weekend with no Team Oregon classes scheduled.

The hardest part was deciding on what to do. Because his free time is limited due to his teaching schedule, I asked Troubadour to pick the weekend activities.  He indicated he wanted to be able to stay in shorts and comfy summer gear all weekend without having to put on hot riding gear.   Considering the long weekend is usually a party weekend with way too many drunk drivers on the roads, we typically stay off the motorcycles anyway.

It is all about minimizing risk.  We minimize risk in our choice of helmet, gear, extra training, and to us one more way to minimize risk is to assess when to stay off the roads.

So, with motorcycles off the agenda that left hiking and bicycling.  How to get both into the weekend.....

Friday we woke entirely too early - before 5 am and decided after a pot of coffee and a light breakfast to go for a walk/hike in Bald Hill Park; just a short walk from the house.  The sun was up, there was a light breeze, the birds were singing, and it wasn't too busy yet.

We returned home from our 4.5 mile walk, had an early lunch and decided to try out the new Hollywood bike rack for the car by taking the bikes to the McDonald/Dunn Forest areas and ride one of the multi-use trails.  The McDonald and Dunn Forests encompass 11,250 acres and are managed by the Oregon State University Forestry program.  There are quite a few service roads and multi-use paths and trails.  Some are fairly wide and smooth for vehicles.  This part of their research forest stretches from the Lewisburg Saddle on Sulphur Springs Road over to Peavy Arboretum off Highway 99W to the east.

It is a short drive into north Corvallis/Lewisburg and we were actually surprised at how many other cars were at the gate.  We ended up parking on the side of the road, but at least it was in the shade.

We chose the Vineyard Mountain Traverse, a "7.5 mile loop through old growth stands of evergreens; physically and technically easy."

It started with a long downhill grade and wound through the forest and up along a ridge. 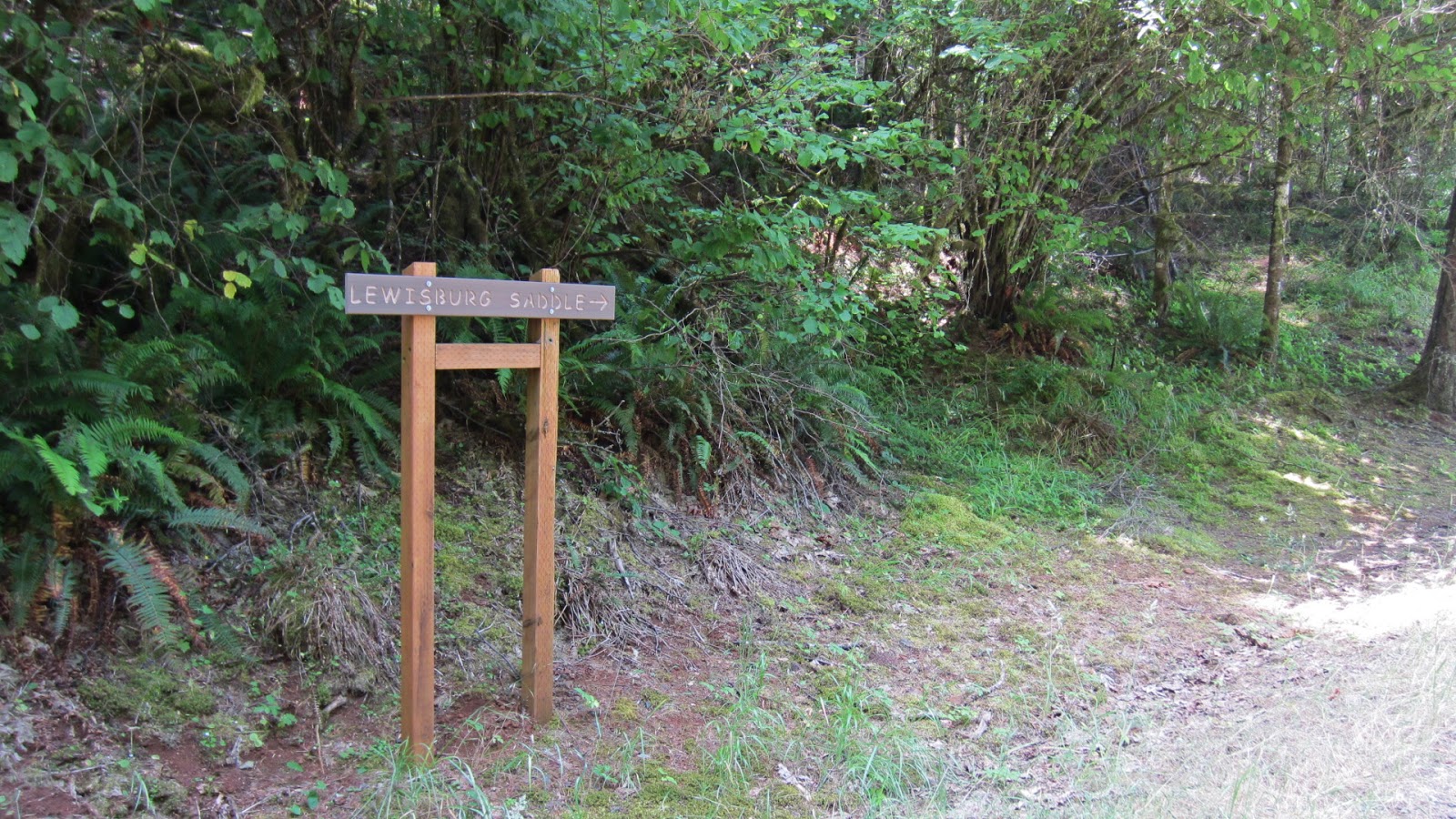 We passed a little lake and watched the salamanders come up for air.  It looked to be an old quarry with it's high bluffs. 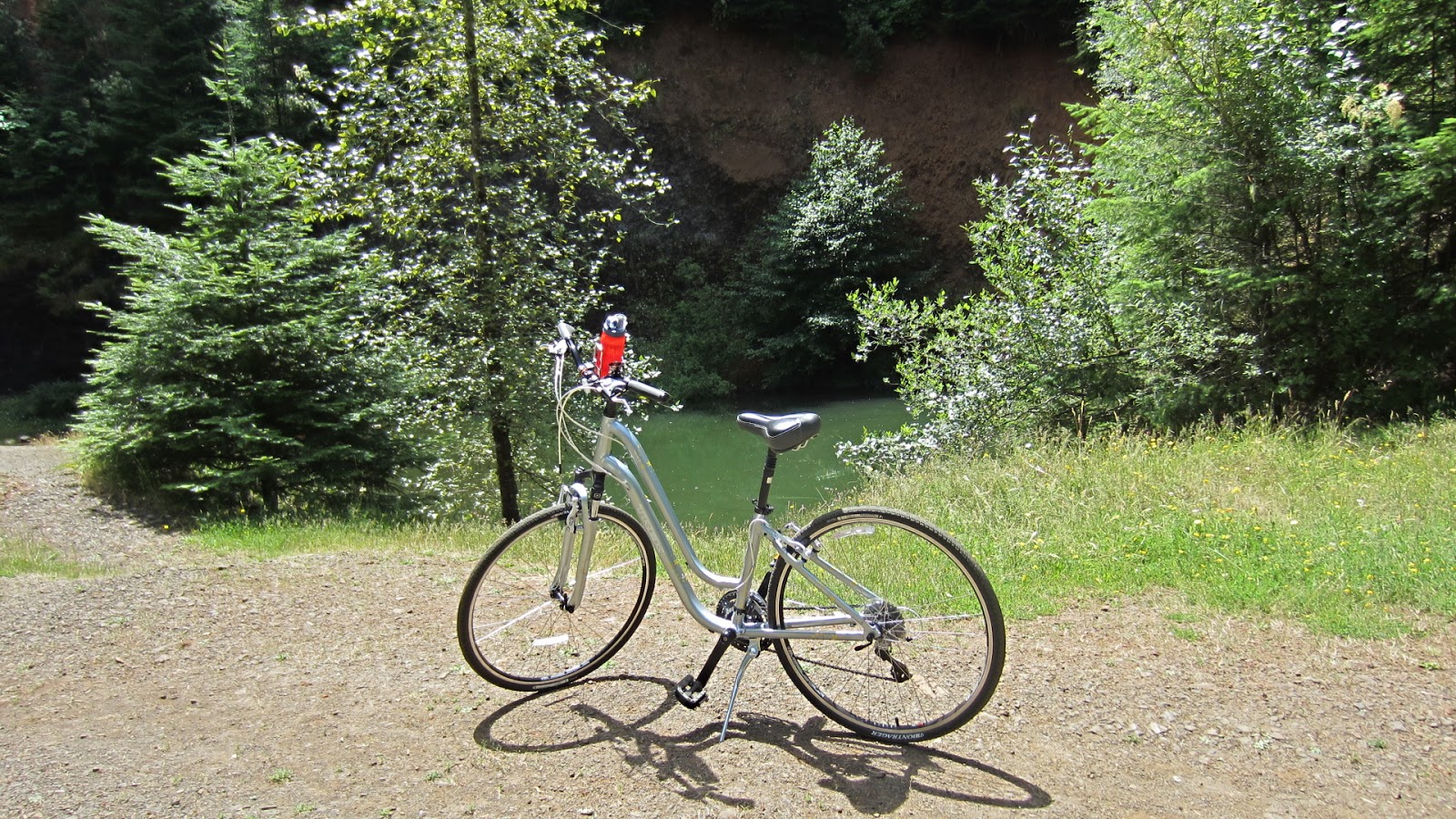 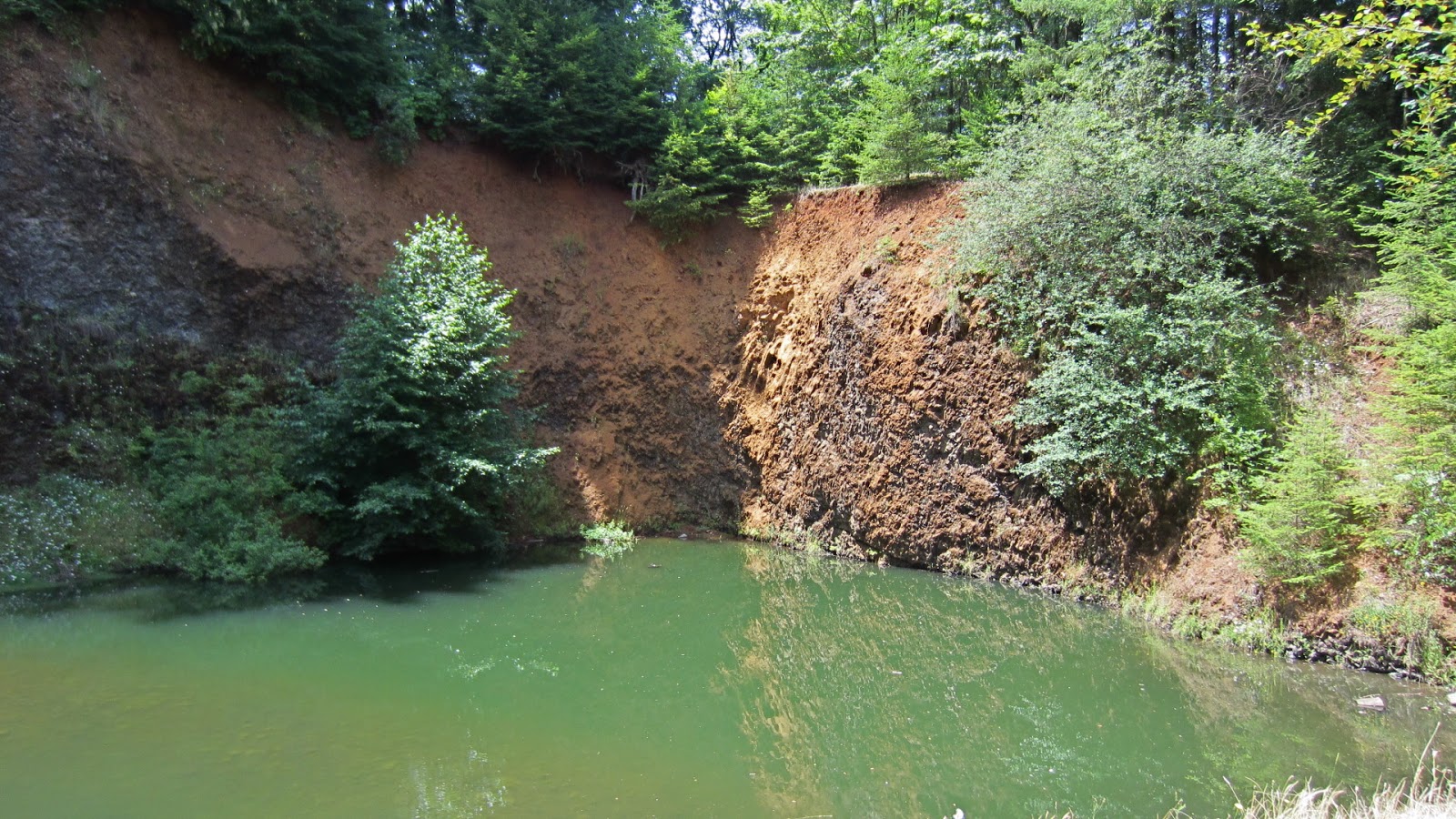 There were some interpretive signs along the way explaining some of the forestry practices. 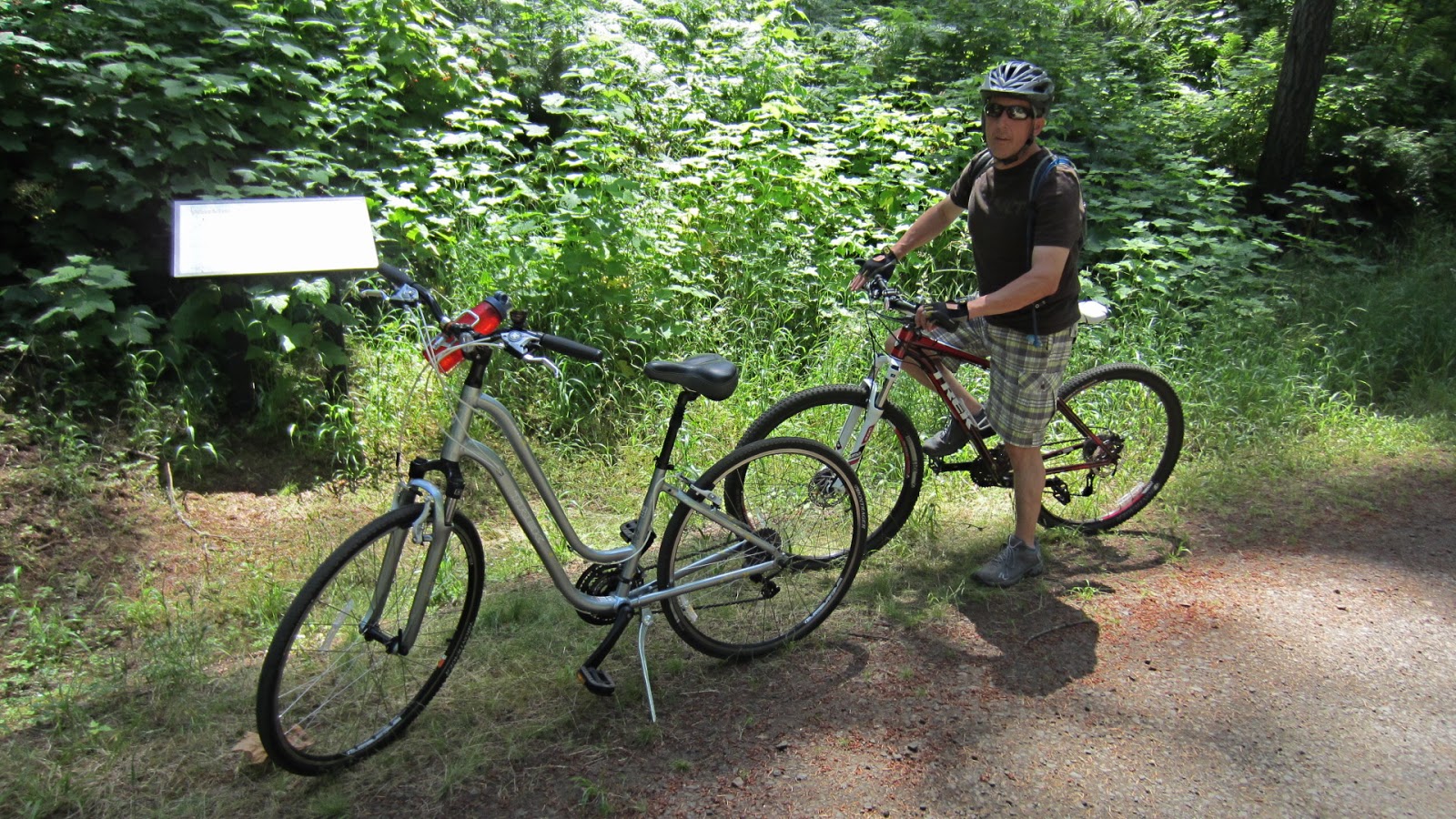 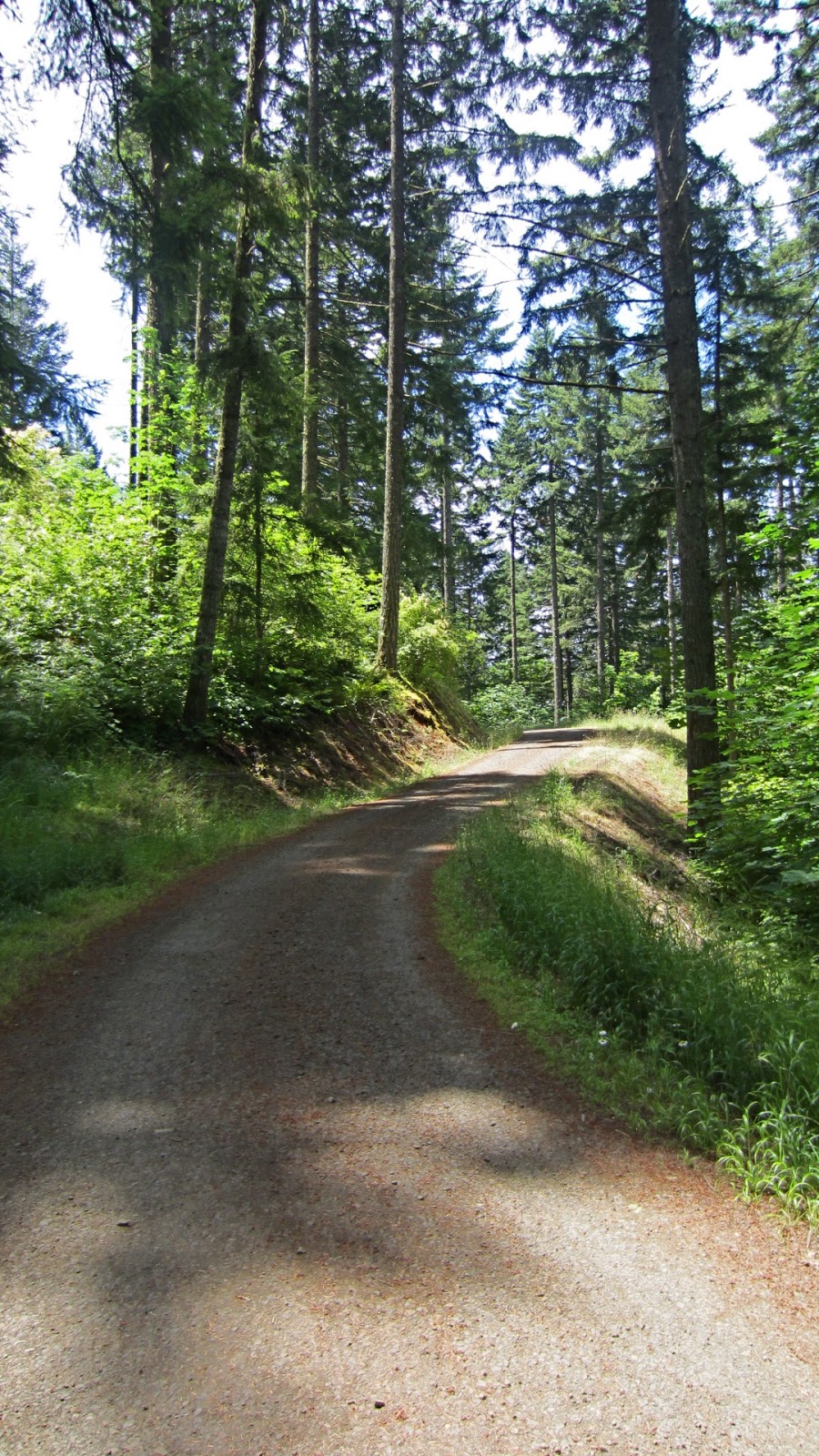 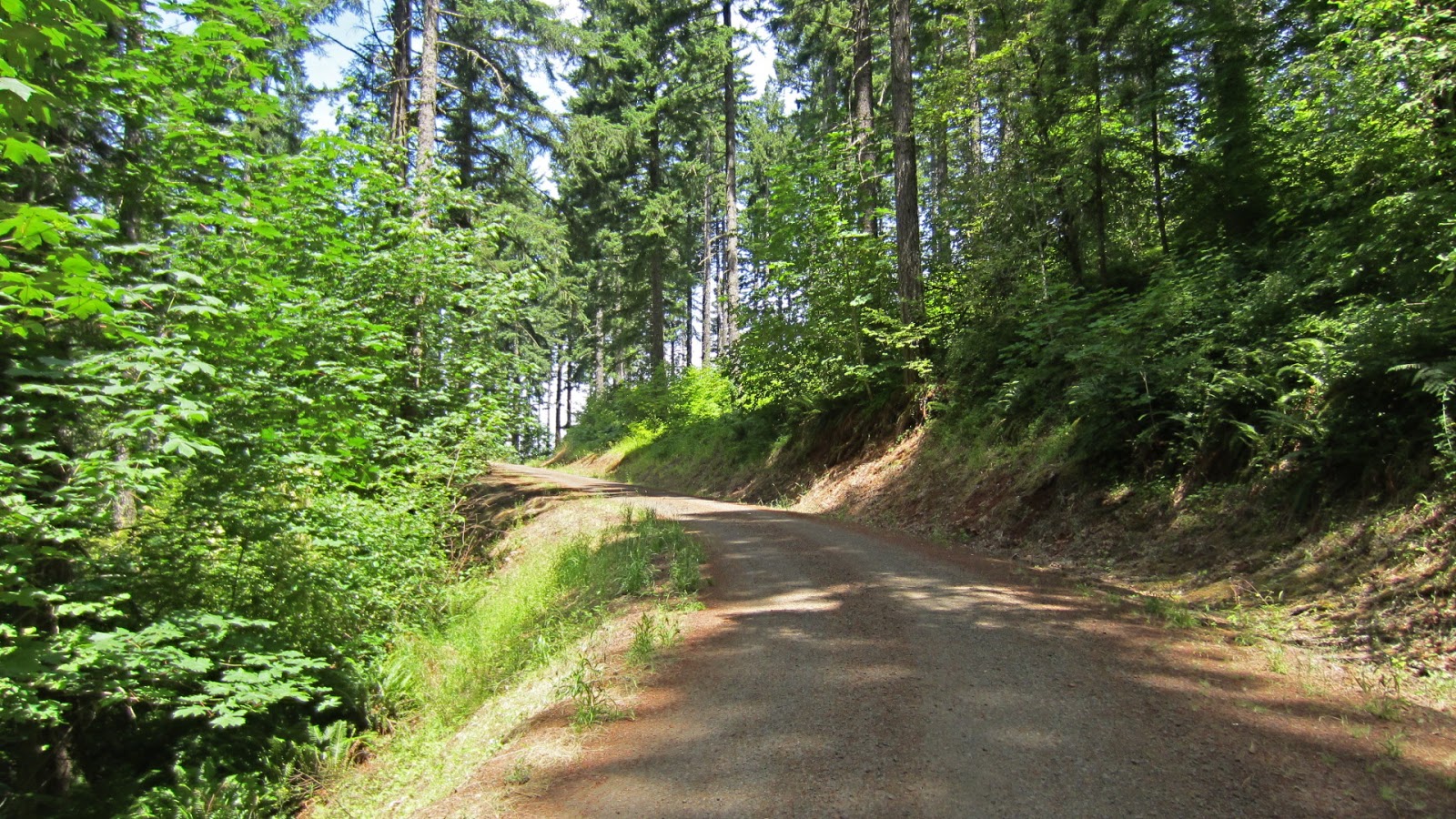 We did have some great views of the other ridge lines while up top. 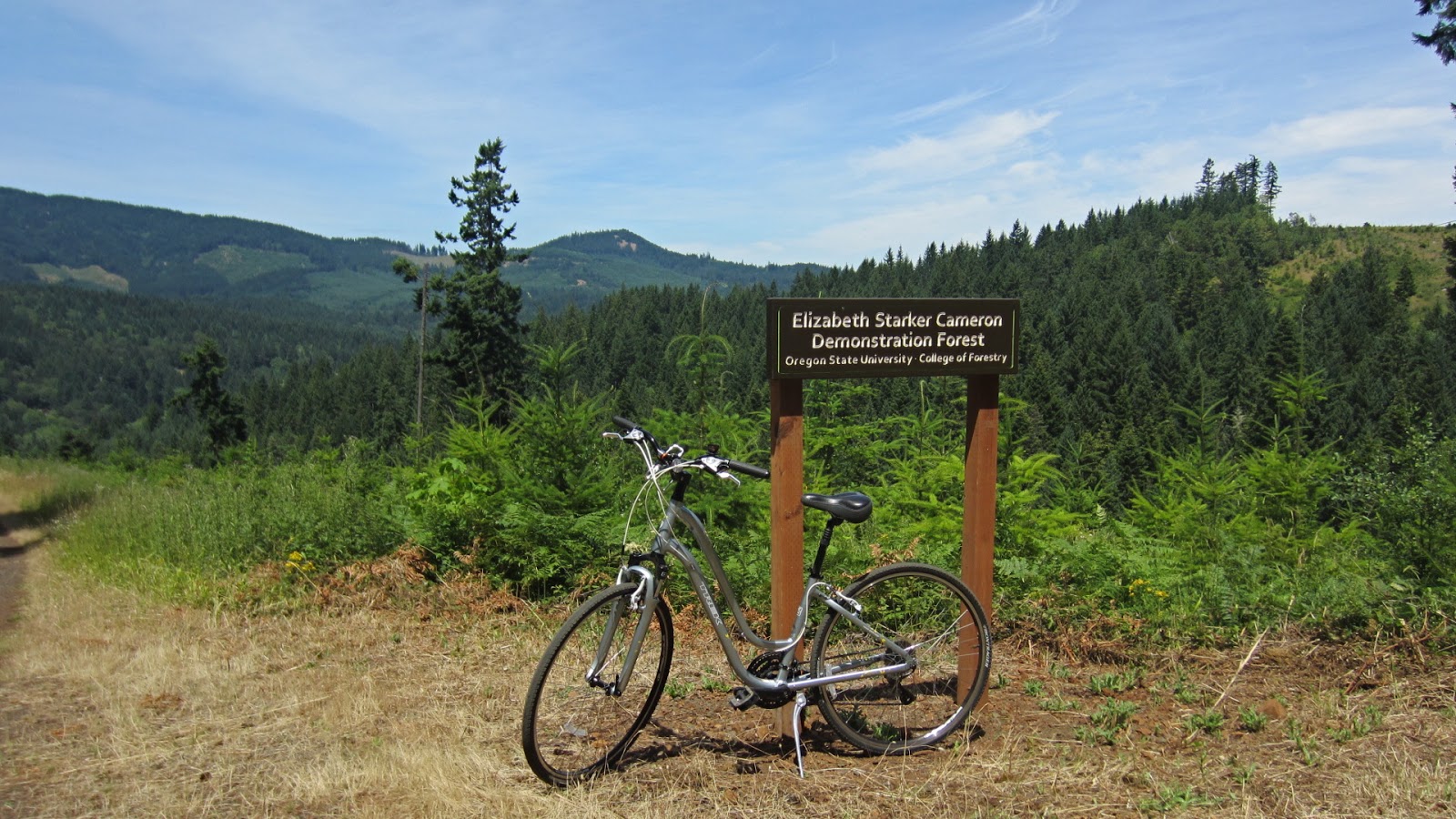 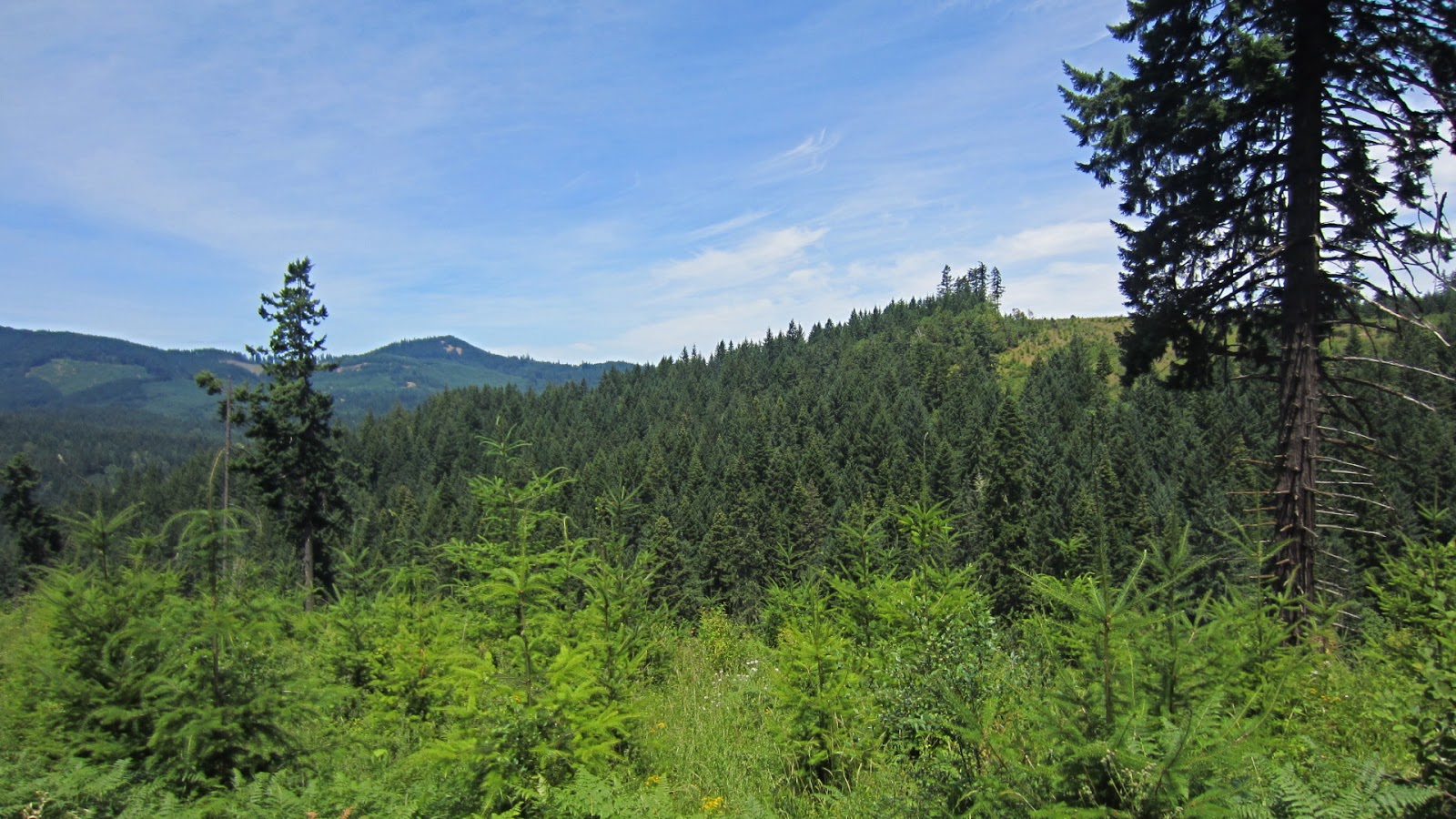 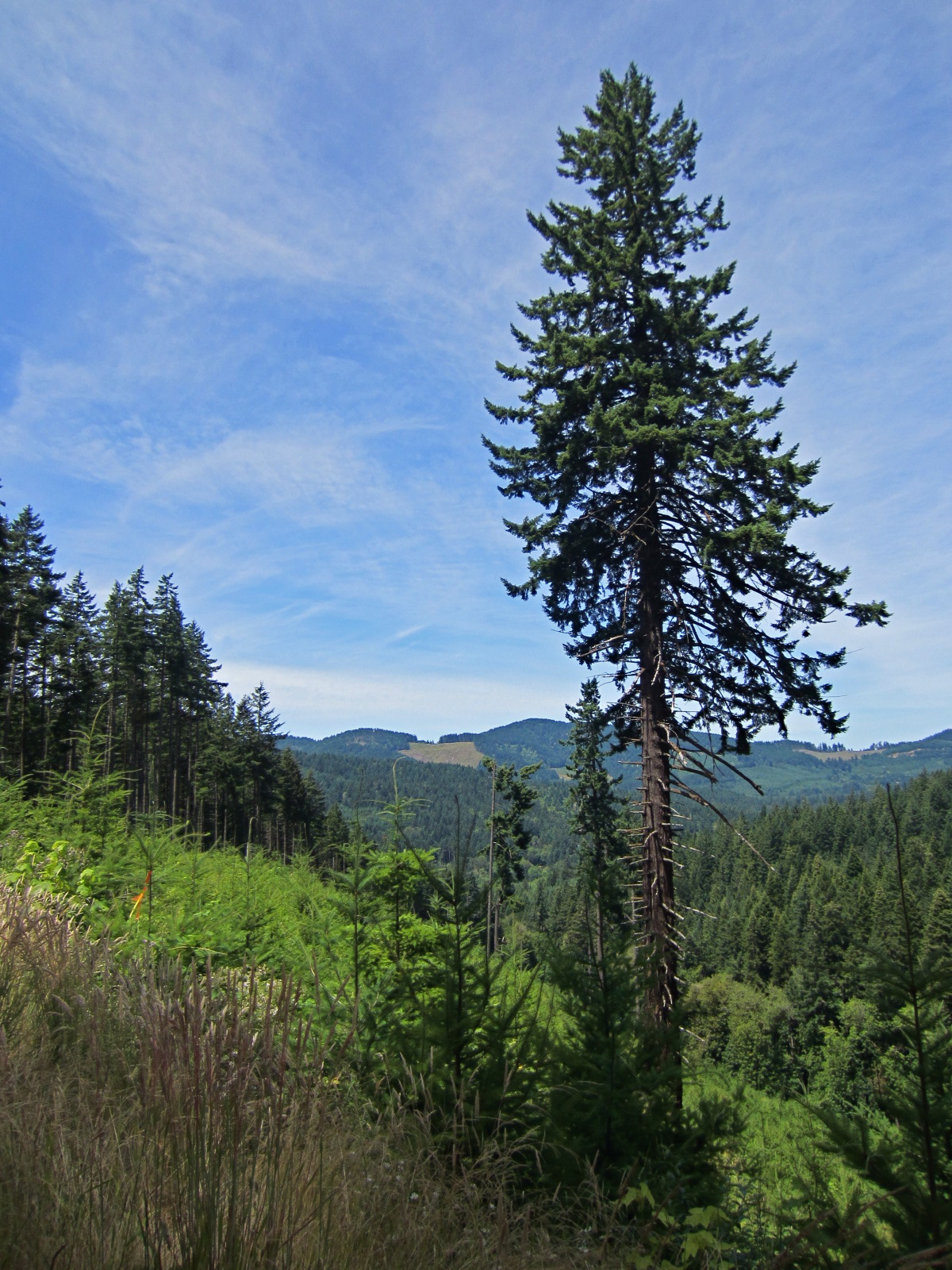 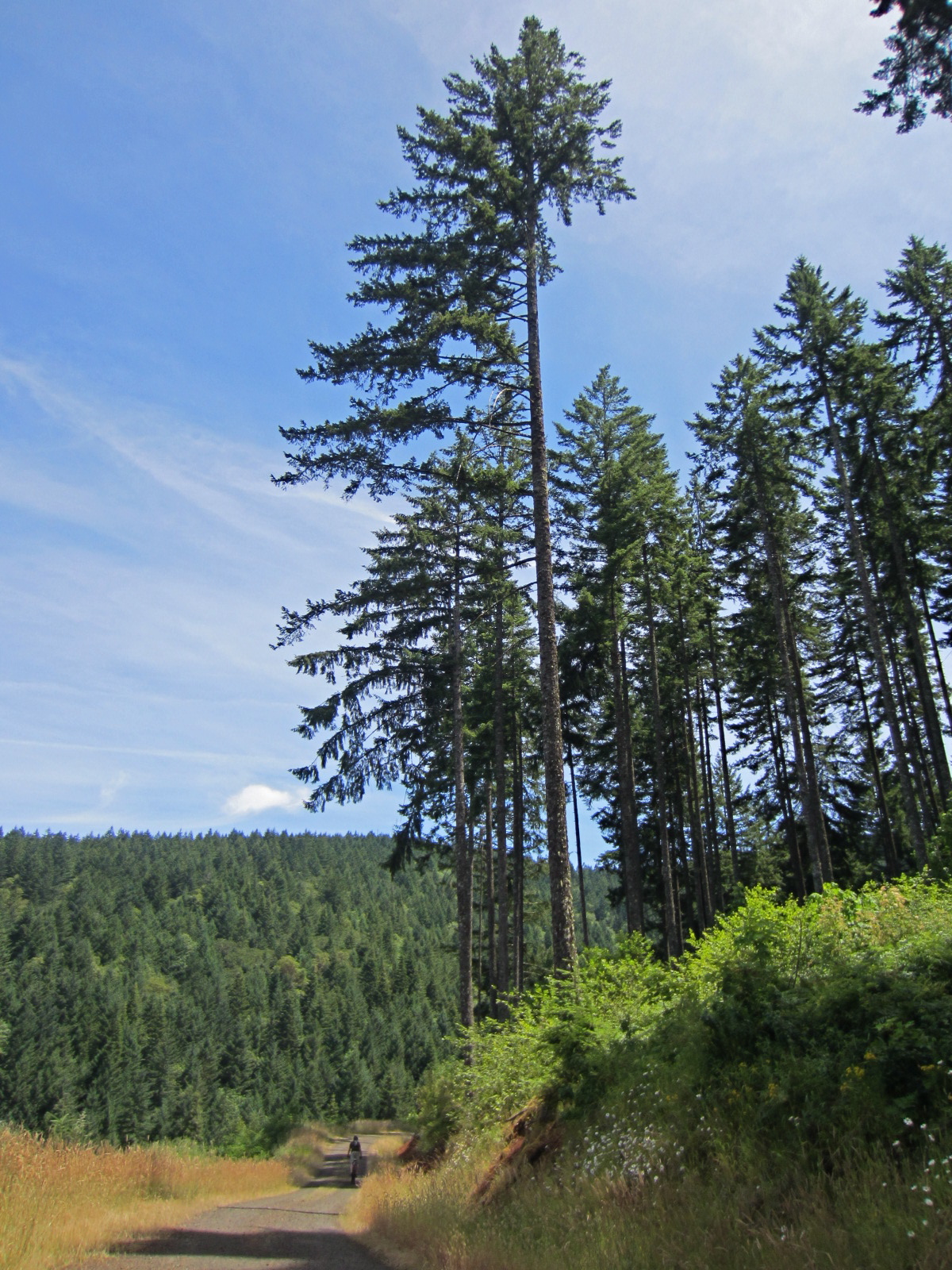 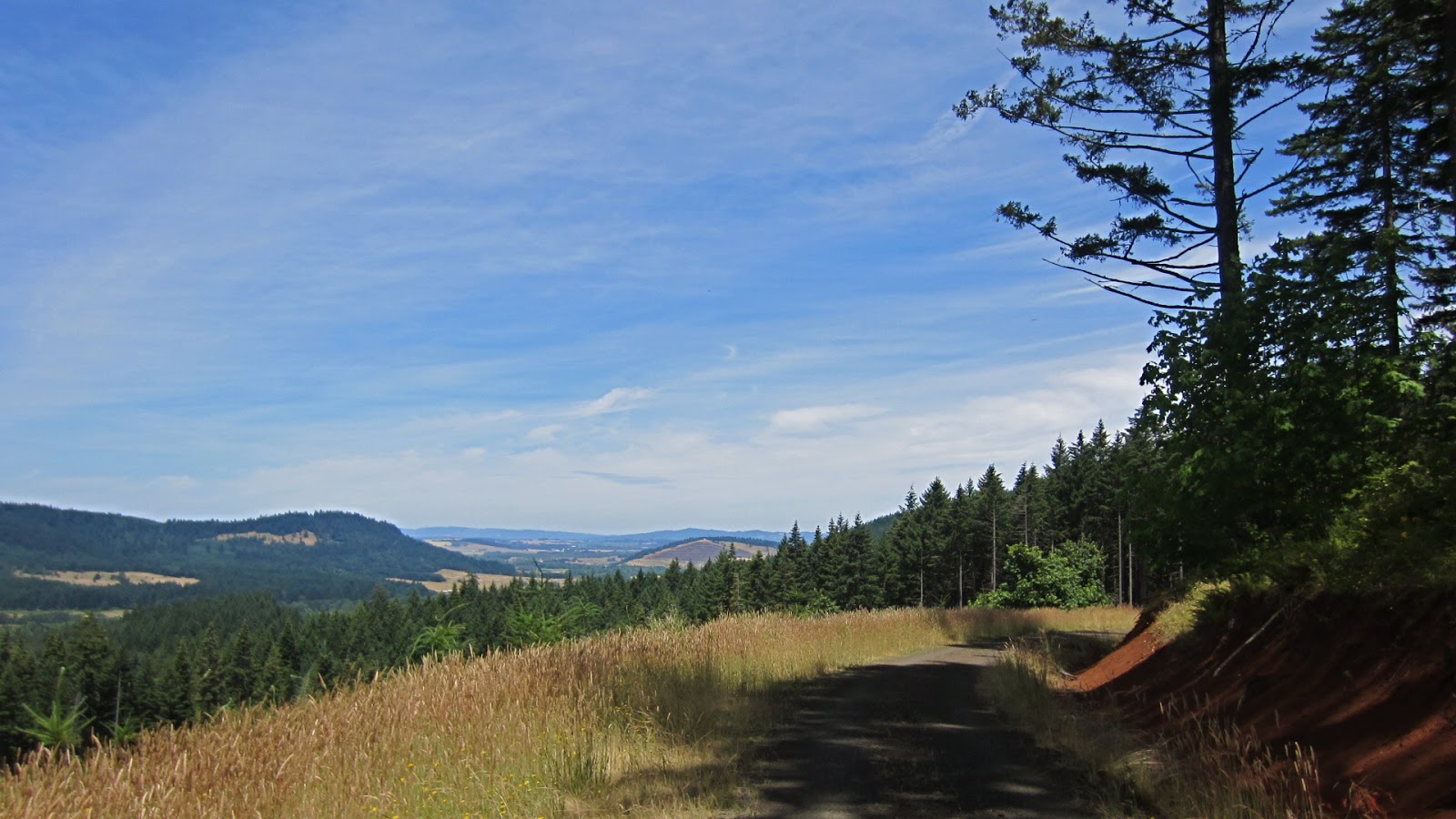 Soon we came to the half way point.  An intersection of 3 access roads. We headed up this one, west  towards the car..... 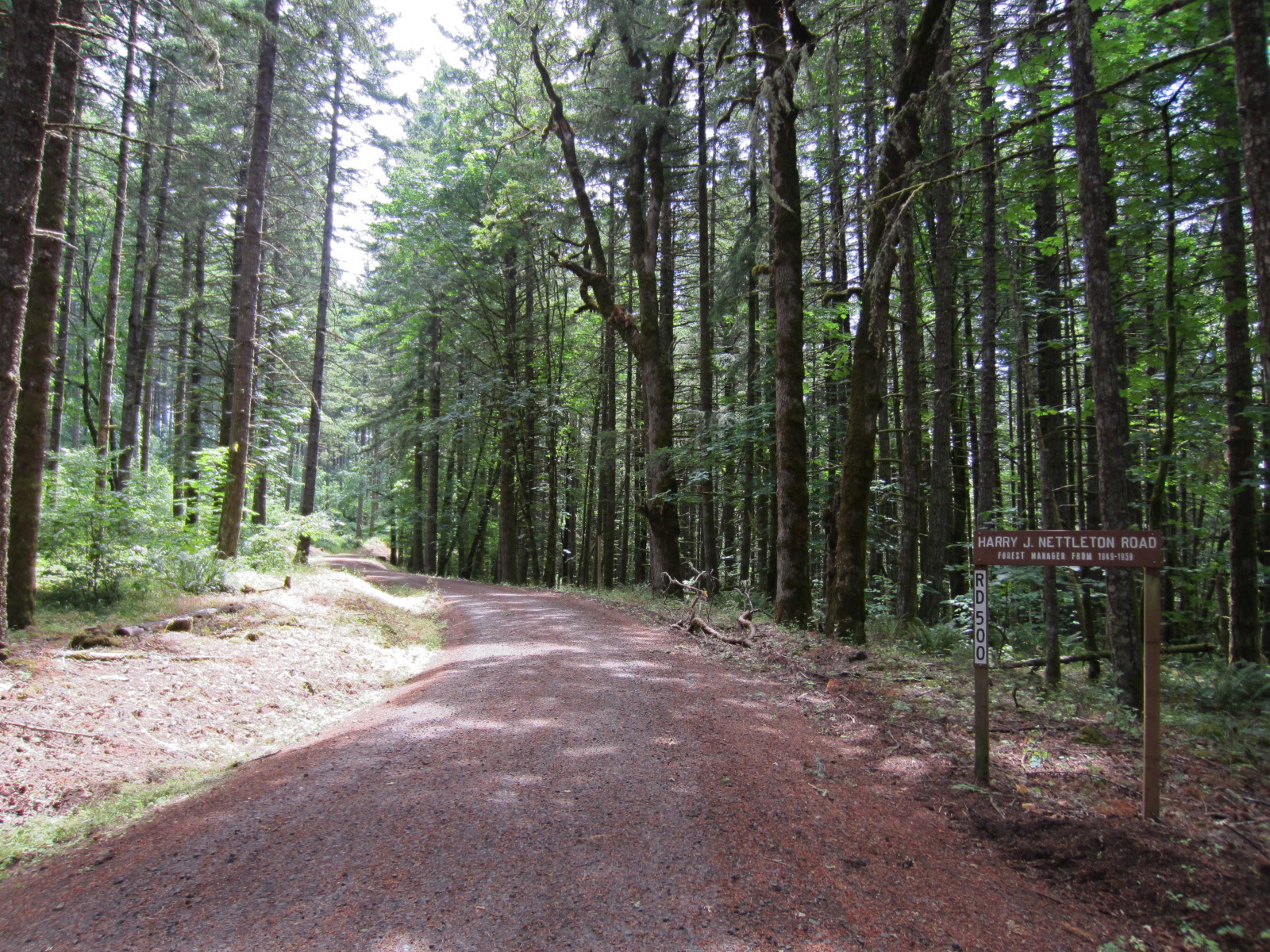 We survived and made it back to the parking lot.  Loaded up the bikes and went home to make homemade potato salad and veggie dogs for dinner.  That evening was spent trying to calm Basil because of the fireworks and trying not to fall asleep on the sofa by 8 pm, we finally went to bed about 10ish.

We were up by 6 am Saturday to relax and enjoy the morning.  Before we headed to coffee Troubadour noticed his rear bicycle tire had gone flat.  That explains why it fell off its perch in the middle of the night and crashed to the floor taking my bike with it.  A rude awakening it was.

We drove to coffee and headed downtown afterwards in search of a patch kit, bike pump, and spare tube. Our local bicycle shop was closed for the holiday weekend so we ended up driving to REI in Salem.


We arrived home about 6 pm and had leftovers for dinner.  Not an exciting day, but definitely relaxing. We also made plans for Sunday.

The weather forecast for Sunday was a high of 93˚F (33.8˚C) in the valley. For us that meant - what can we do at the coast where we'd be guaranteed at least a 20 degree drop in temperature.

We consulted the Kissing the Trail book Saturday night and discovered the Siltcoos Trailhead, where there is a 4 mile single track intermediate mountain bike trail just south of Florence (95 miles southwest of home).  Intermediate is one rank above beginner in the book.  It sounded good, but I'd never done any kind of single track before so I was a little apprehensive.

We had breakfast, puttered a bit, loaded the bikes, packed some snacks and set off.

It took a bit to find where to pay our $5 parking fee.  The Siltcoos National Forest has a few parks and trailheads in and around Siltcoos Lake as does Lane County and the State Park system and each one is different.  They cost different amounts and you pay different entities.

We parked at the trailhead and there was only one other vehicle.  We unloaded the bikes, strapped on the helmets and gloves and looked at the uphill climb.  At least that meant it was downhill to the car on the return trip.  Rather than take the book with us I took a photograph of the trail map in case we needed to consult it on the fly. 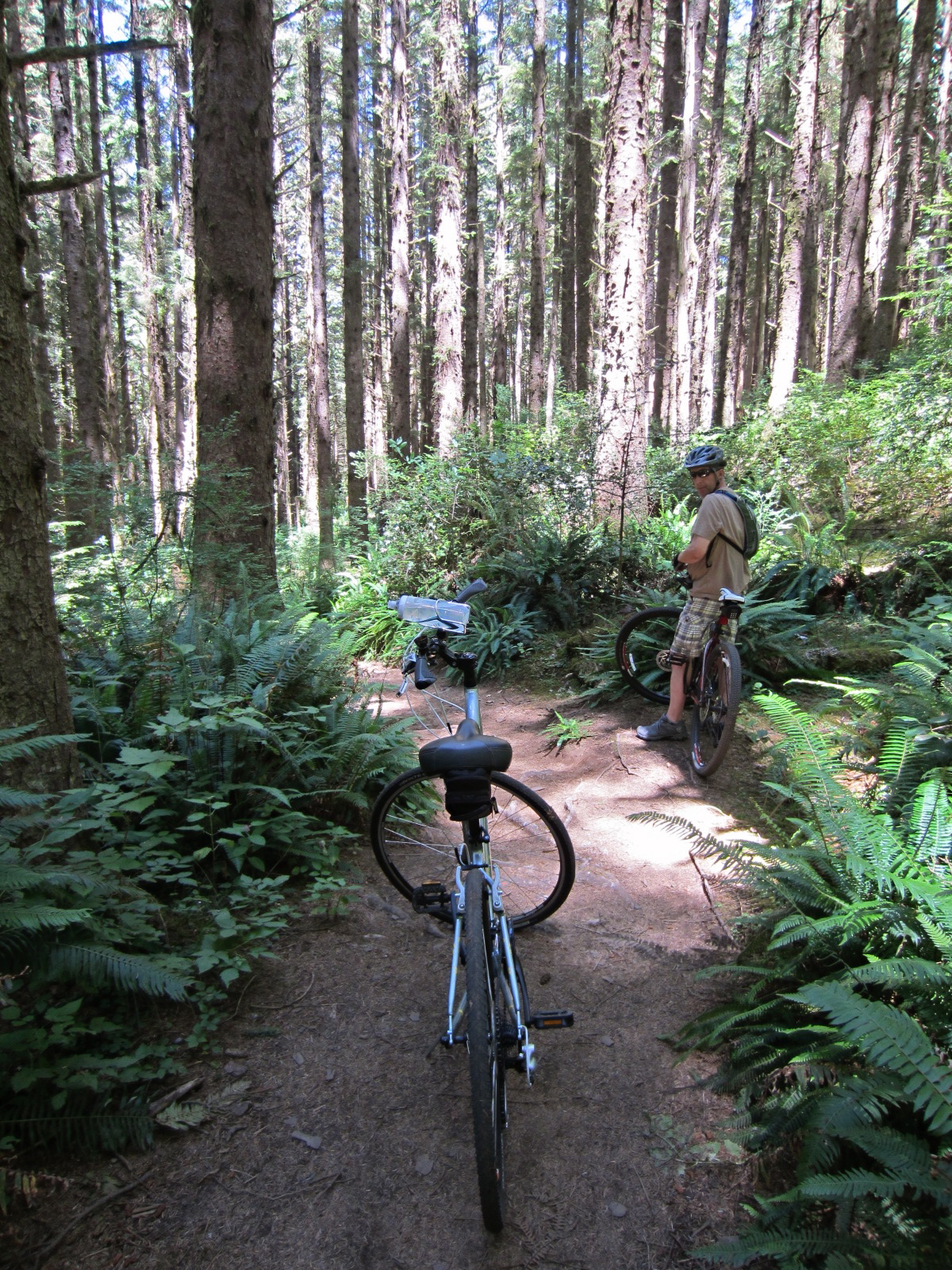 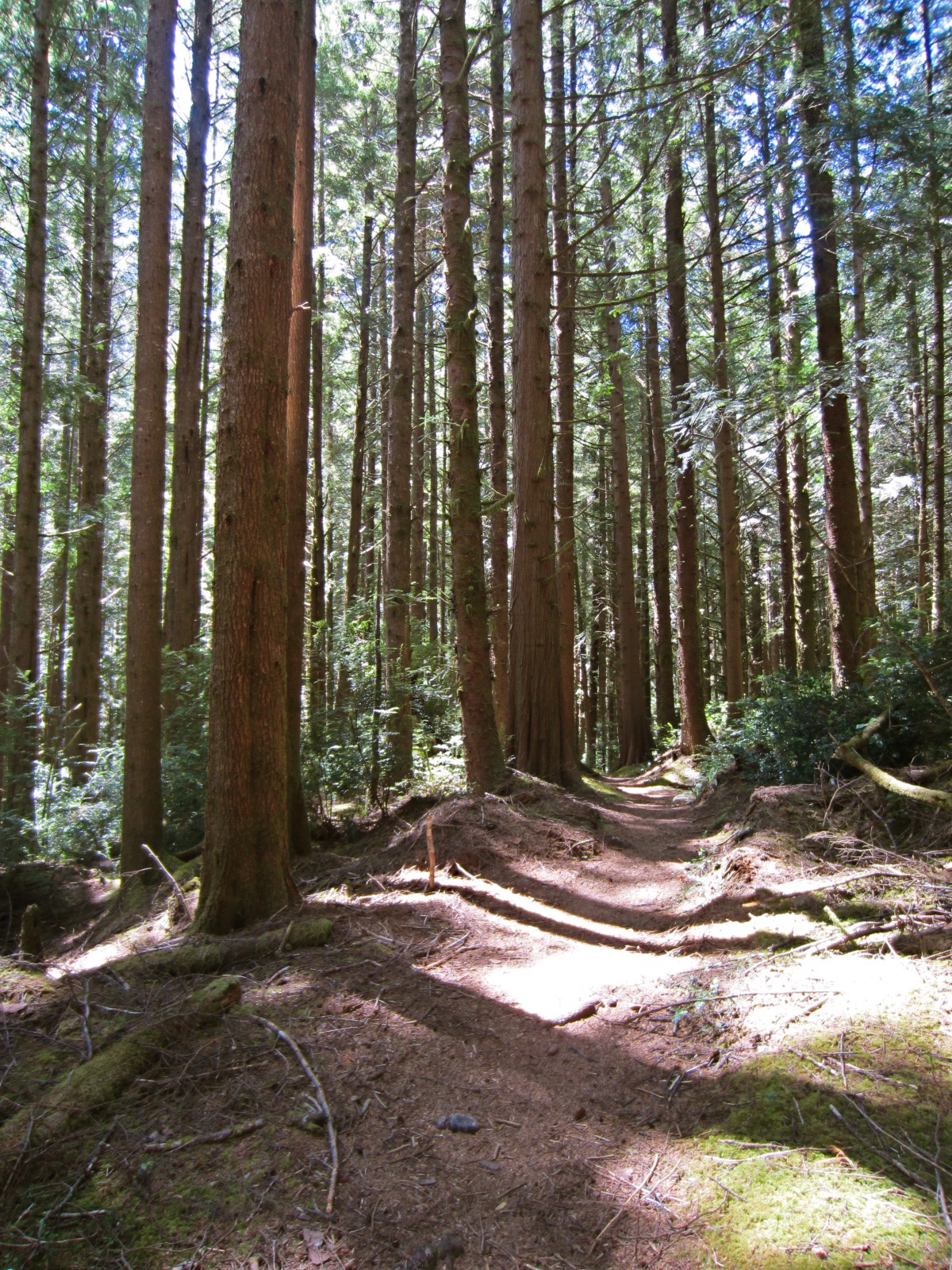 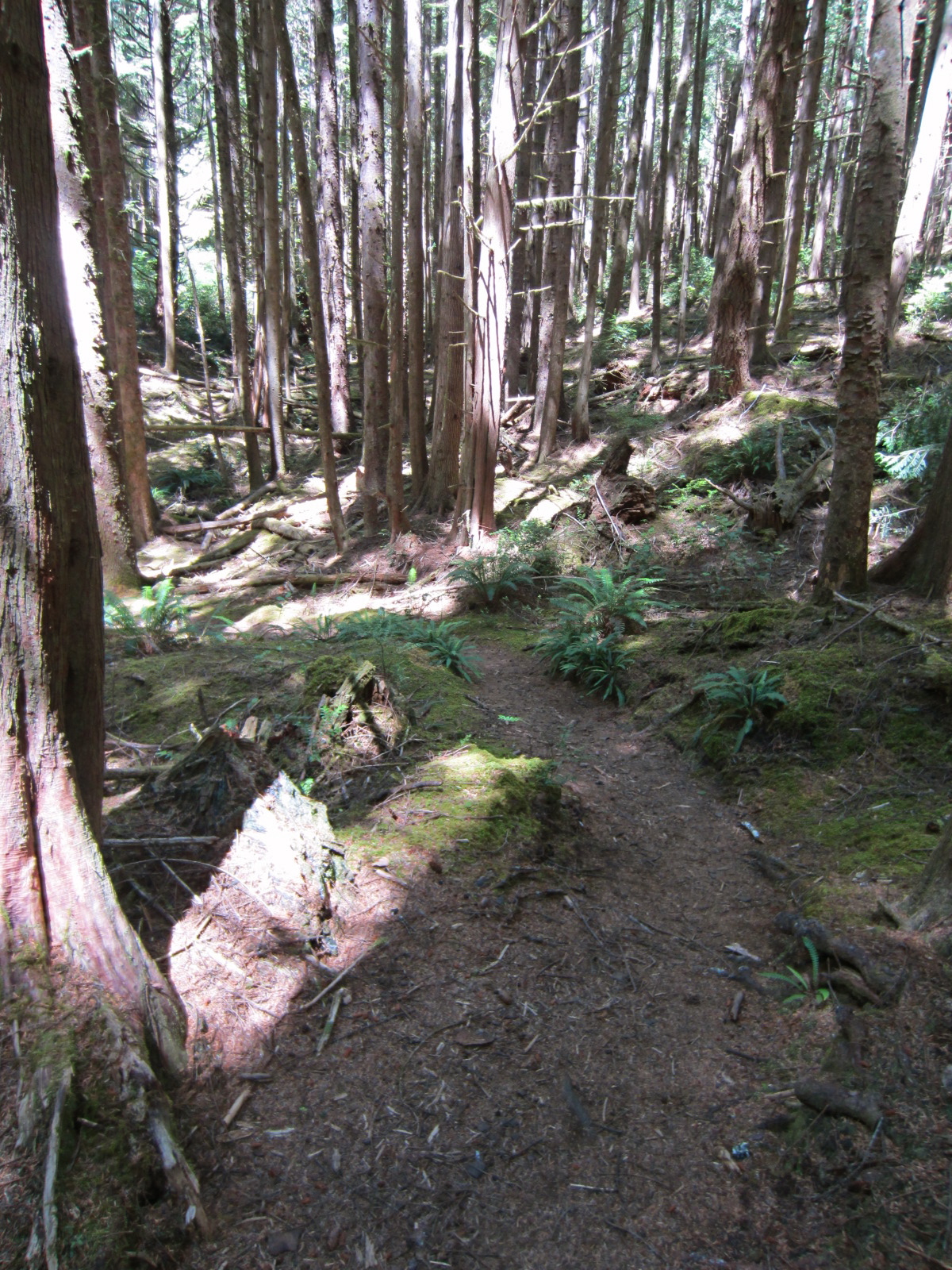 Some areas of the trail were against a bank on one side and steep drop off on the other, and in other areas we seemed to zoom through a rolling valley floor.

We eventually came to the primitive camping spots at the half way point.  These campsites can either be accessed by boat or by hiking/bicycling.  They even have a "vault" toilet.  An outhouse by any other name ....... Some of the campsites had picnic tables. 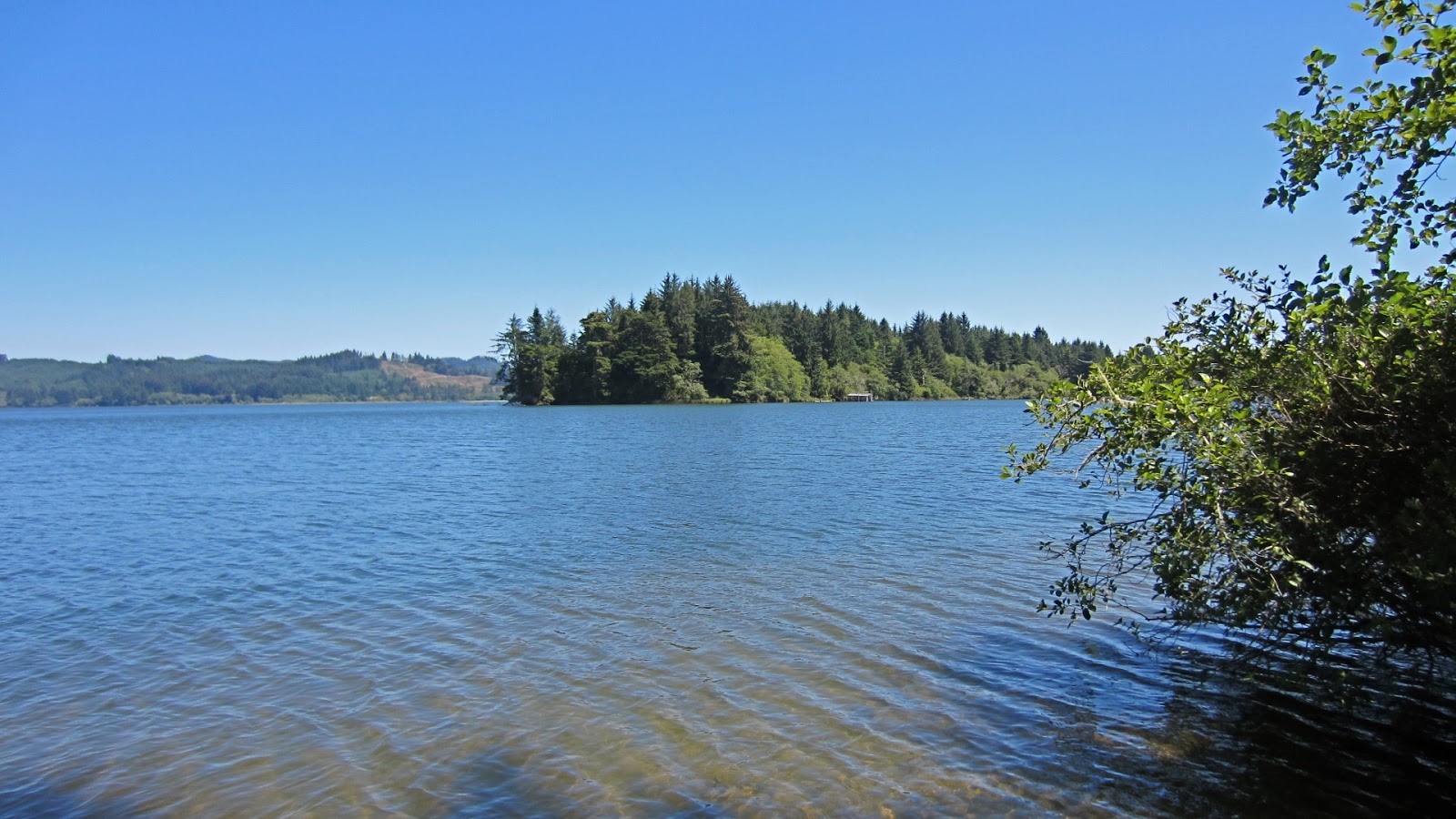 From the campsites we kept following the trail.  We took a 0.4 mile detour down over fallen logs and through a blackberry thicket to another group of campsites.  Then it was a 0.4 ascent to get back to the main trail.  The trail wound up then down and after a fairly rapid descent we rode across a boardwalk only to be stopped by stairs.

I believe it was while pushing my bike up the path around the stairs huffing and puffing that I said: "Buy a mountain bike they said, it'll be fun they said." After the stairs it was a fairly long climb before we hit a rapid descent to the trailhead.  No more picture stops.  I was certainly glad to be back to the trailhead and off the bike.  Sure I could have ridden more..... downhill.

It was a great ride and I am sure we will do it again.  It sure was different from the ride on Friday.

And just in case you are interested.  I found a video on YouTube where someone recorded part of their ride on this trail.  Here it is:

At the trailhead, we had a snack of trail-mix (what else) then loaded up the car and headed north to Florence.  We stopped for petrol at Fred Meyer and I went inside for some bananas and cherries.  We feasted on fruit on the way home.  You know you're vegan when fruit for dinner hits the spot.

1 - Flat tires
2 - Bikes fallen over in the house
4.5 - Miles hiked/walked
7.5 - Miles of forestry roads ridden in Corvallis
4 - Miles of single track ridden in Florence
2-3 - Bruises and Scratches:  a few on the shins and damn those blackberry vines
0 - Sore bodies:  surprisingly neither of us were sore after all that riding
Amount of fun:  Can't be measured

I was surprised at how much my motorcycle skills came into play on the single track.  Not just picking my lines along the trail and avoiding obstacles, but looking through a turn too.  Troubadour said that this track was actually tighter than the single track dual sporting they do at Huckleberry so now I am really looking forward to my first off-road adventure there.

I work Friday morning this week and hubby teaches on Saturday.  That leaves Sunday as our only day to play.  So far the forecast is for 96˚F (35.5˚C) temps in the valley.  Not sure what we'll do to duck the heat.  It does make us long for a return of the temperatures in the 80's, and just where did the rain go?

Don't get me wrong, we are not complaining about the heat.  After the cold winter we had, our friends joke that the first one to complain about the heat gets a punch in the throat.  Not it!

" Courage is doing what you're afraid to do.  There can be no courage unless you're scared." - Edward Vernon Rickenbacker
.
Posted by Trobairitz at 8:07 AM