Last Sunday, Polar Bear stopped by our house promptly at 7:30 am while the valley was slumbering under a blanket of thick fog.  It was a balmy 44˚F (6.66˚C), but it wasn't raining. We were off to Browns Camp Off Highway Vehicle Area.  For a trail map click ---> LINK.


We, and by we I mean Troubadour and Polar Bear, loaded up the bikes onto the trailer and we were on the road by 8 am.

Two hours later we arrived at Browns Camp to clear skies and a drop in temperature to 38˚F (3.33˚C).  The gate to the main staging area was closed so people were parking where they could. As Polar Bear was backing into a spot he started laughing almost maniacally.  Apparently he caught sight of my TW in his side view mirror.

Did I mention the roads were muddy once we left the highway?

This is my bike before I'd even had a chance to sling a leg over, just as it was when it rolled off the trailer. 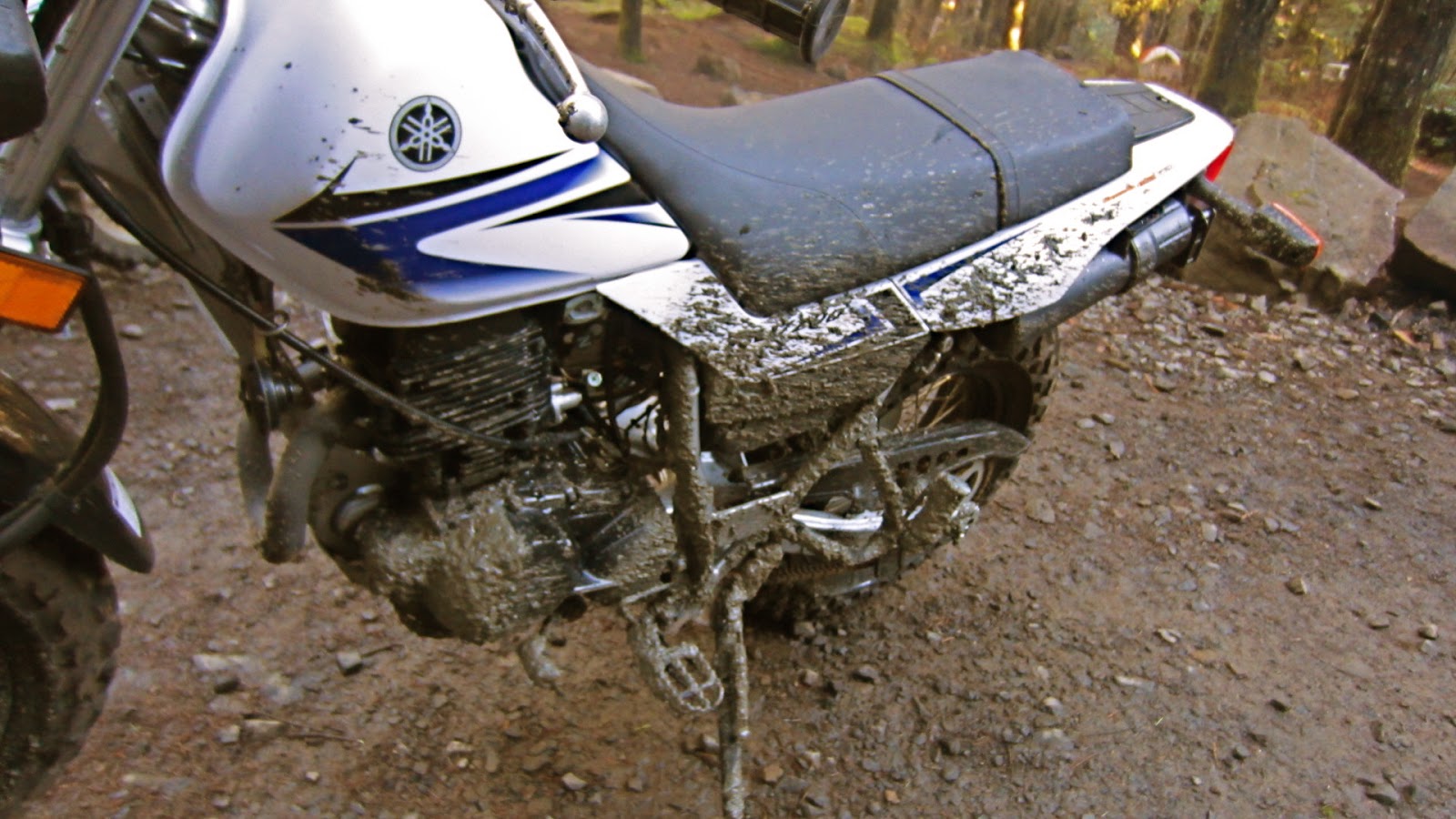 As we all put our gear on and checked the trail maps we decided it would be best to stay on some gravel roads and a power line road for a while since I hadn't been on the TW since we were at Huckleberry Flats last year.  This was also my first ride with the new Fox mx boots.  Luckily Troubadour had adjusted the shifter so I could get my toe under it.

We tootled around on gravel roads, up this way and down that way.  Over a little loose gravel, packed mud, and rock strewn roads.  I was having fun, but was quite nervous on the steeper downhill rocky areas.  On the way up I could just roll on the throttle and the TW would climb up like a goat scenting blackberry bushes at the top.  But what goes up must come back down.

After about 2 hours we headed back towards the truck to take a break for lunch.  Polar Bear took off on one of the trails to give his Fantic trials bike a little work out.  We managed to beat him back to the truck and trailer by 10-15 minutes.  Note to self - don't get separated from the guy with the keys to the rig.

It was 1 pm and there was still a chill in the air.  There was never a time when we couldn't see our breath.  How does one dress for riding in those temps?  Well for someone who doesn't like to layer clothes I had a surprising amount of layers on.  For the bottom:  32˚Heat long underwear, yoga pants, knee high motocross socks, knee pads, mx pants, and mx boots.  For the top:  32˚Heat long sleeved thermal shirt, short sleeved active shirt, heavy cotton sweat shirt, RXR inflated chest/back protector, elbow pads, and my mx jersey.  I also had a buff around the neck and my winter riding gloves.  Luckily Troubadour has installed heated grips on the TW, but I only used them for the first 20 minutes or so.  I can't say I was ever cold until we stopped for lunch.

I felt bad that the guys hadn't really been out on any trails yet, but figured with all the mud they might be a little above my skill level.  I volunteered to stay back at the trailer and drink hot tea while the guys headed out to play.  Polar Bear's Fantic was giving him some electrical issued so he took off on the TW to really give it a work out.

About an hour later they returned with big smiles on their faces.  It was after 3 pm and time to think of loading the trailer once again.  I was stuffing gear into the gear bag in the truck when I looked out and saw Polar Bear contemplating how he wanted to load the bikes for the drive home. I couldn't resist one last picture. (Since I didn't have a pocket to take it with me on the actual ride)


We arrived home at 6:30 pm. Knackered but spirits were high.

I haven't had a chance to take the bikes out into the sunshine this last week for pictures. Damn job gets in the way.  But, I did manage a few pictures in the garage this morning just to show how the bikes looked after riding in the mud.


It has taken me a week to finally write-up this post.  Work has been super busy and the last thing I've wanted to do in the evening was stare at another computer.

Troubadour is teaching his first Team Oregon class of the year this weekend so I have a bit of time on my hands.  He had a dry day yesterday, but of course it is raining today.

And before I forget, thank you for driving Andy!!