Bobskoot has slowly been gaining gear for his travels this summer.  We too have added a bit of kit to our gear bags.

Saturday after coffee we went to Portland and did a little shopping.  We hit up a few motorcycle shops and also REI.

On Saturday we purchased the following goodies:

Tour Master Airflow gloves - because with the hand guards on Max my Fieldsheer Aquasport gloves are too darn warm in 90˚F weather.  Of course I bought the blue color.


I also bought a Triumph t-shirt since moto-centric shirts have been missing from my meager wardrobe.

I also happened to be by the Croc store in Bridgeport Village.  With the 2012 IMBC upcoming I was in need of a new pair of Crocs.  My last ones tasted the bite of a bungee cord on the way home in 2010 and are too gnarled to fit properly.  Traditional Crocs do not seem to fit me. They are too short in length and when going up in size become too wide.  I opted for a more non-traditional Croc shoe.  I chose the Springi Flat in the color Espresso with pink elastic. They are extremely comfortable as the elastic/shoe flexes with each step.

Troubadour picked up a pair of Sidi Way Rain Boots.  He has been needing new boots for a while and I think he will be happy with the Sidis.  I am happy with mine so far, and it is a bonus that they are made with Lorica instead of leather and therefor vegan.

At the Triumph shop he also found the Triumph Lancer Mesh Jacket in a red color that shall compliment Lucy's color nicely.  What a striking pair they shall make.  The grey is a darker color than the photo indicates.  Not sure I can talk Troubadour into modeling his though.

After gear for ourselves came some camping gear.

We were in REI as they were having an anniversary sale. A lot of goodies were up to 30% off and we also were able to get one regular priced item at 20% off.  Last year while camping we used the Sea to Summit  collapsible X-Bowl a lot and often wished we had a second.


Also, when using the Jetboil to make tea by the side of the road we thought it would be nice to have X-Mugs too. They were 25% off so we purchased one more bowl and two mugs.  We now have one of each in orange and blue. Not only do they collapse, but they also nest into each other as well.  The mug holds 480 ml (2 Cups) and is marked and calibrated in milliliters for measuring.

The bottom of the bowl also doubles as a cutting board.  They only weigh about 2 ounces (60 grams) each.  So, not only are they light, but take up little room in the saddlebags as well.  Check out the links above for pictures of them open and collapsed.

I think that is most of the goodies we purchased on Saturday.  The highlight of the day was the bird dive bombing me in the REI parking lot when I apparently got too close to a nest.  I got the claws right in the back of my head.  He/she waited until we passed by before coming in for a sneak attack from behind.  No blood was drawn, but I can tell you it stung and bad words were said.


We had a great day and didn't get home until almost 10 pm.  We had so much fun I think we had a shopping hangover yesterday, as it was really hard to get motivated to do much of anything.

Eventually we did muster enough energy to attend the Oregon Vintage Motorcyclists (OVM) Show and Swap Meet at noon.  It is about 3 blocks from our house, so how could we not go.  This years marque was Royal Enfield.  The weather was drizzling, but I managed to take over 90 pictures so those will come in a future post or two.

Here is a sample just to tease you. 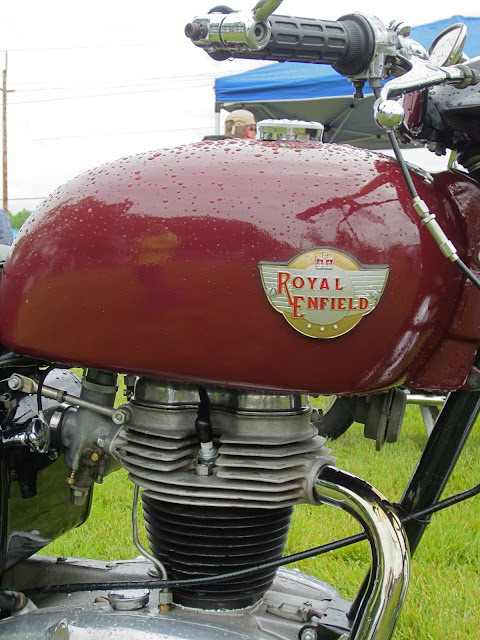 - Au Revoir
.
" I went to a general store, but they wouldn't let me buy anything specific." - Steven Wright

Posted by Trobairitz at 7:42 PM