I must admit, we slept in a little on Thursday, May 29th.  I don't think we got out of bed before 8 am.  Again, Troubadour headed to the lobby for coffee while I put the coffee maker on to brew.

We thought of what to do and decided while it wasn't as windy in the morning, to stroll around the Harbour Walkway in a counter clockwise direction and loop around by Fisherman's Wharf, Ogden Point and possibly to the Mile '0' marker of the Trans Canada Highway.  Then if we had enough time we'd go to the Royal Museum in the afternoon. (spoiler alert - we didn't have enough time)

After breakfast of toasted bagels with peanut butter and bananas we set off about 10:30 am.  It was slightly overcast with a little breeze.  It was nice to just take a stroll without being on a timeline at all.

We walked by the floating homes of Fisherman's Wharf. 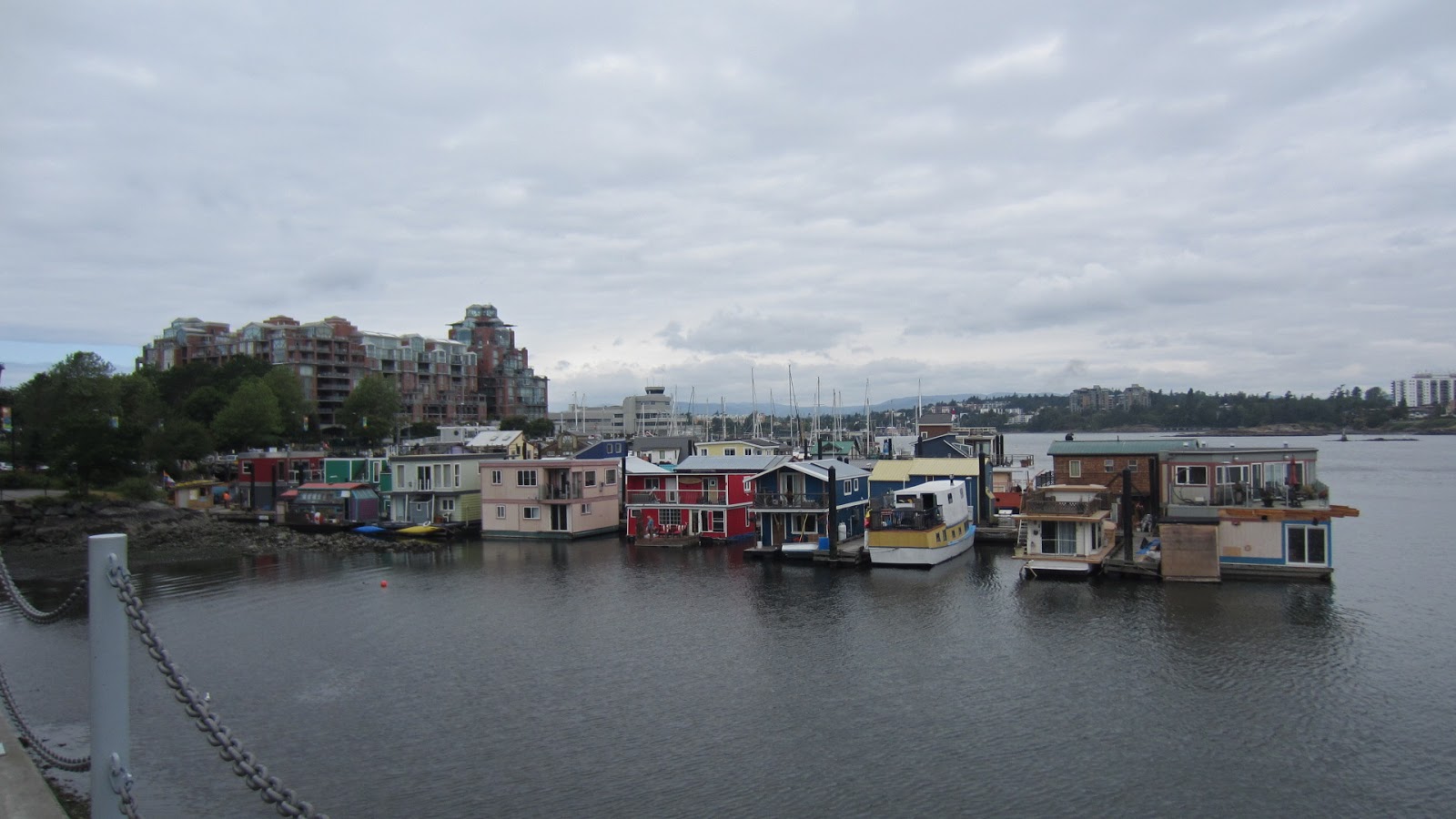 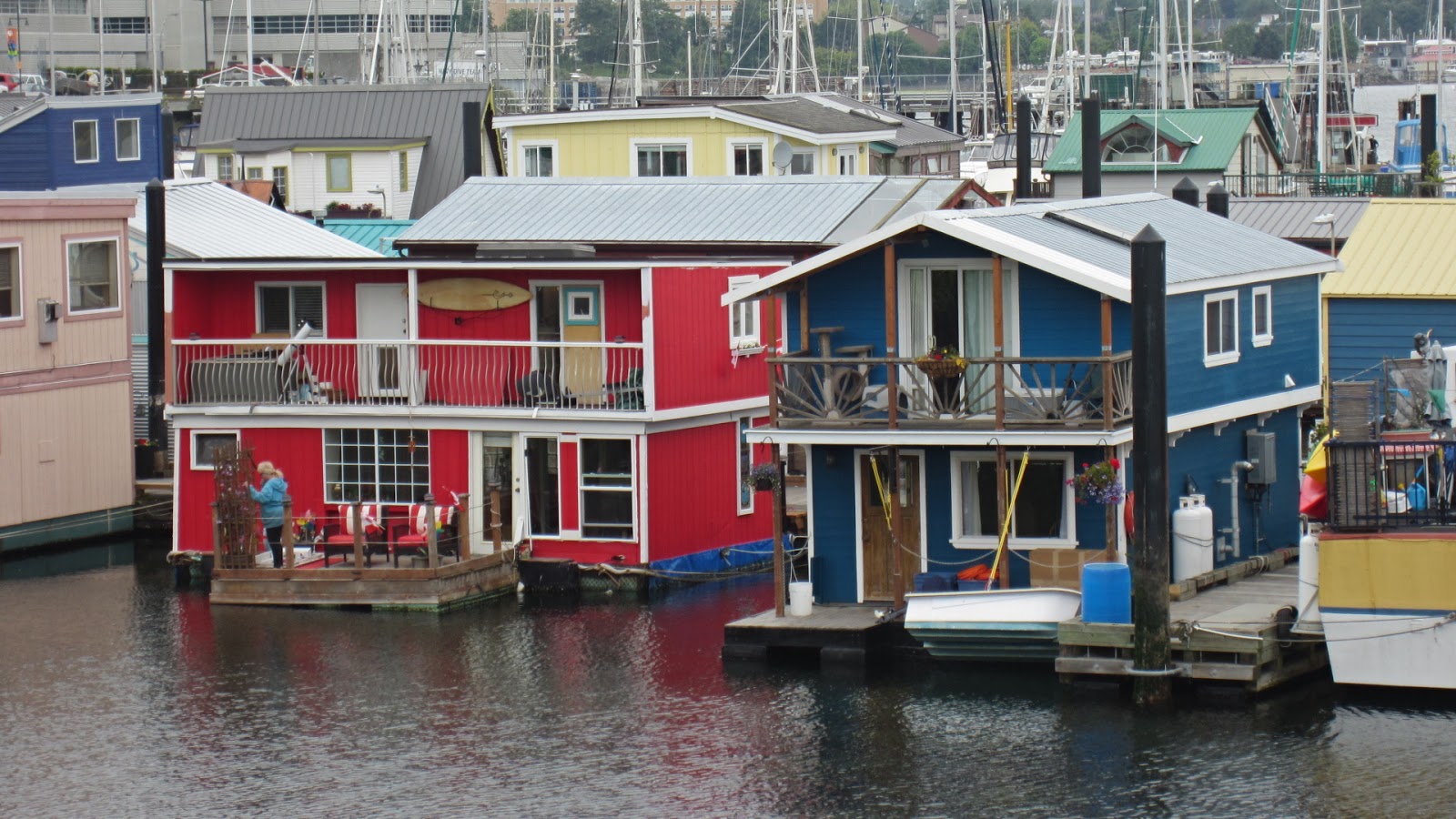 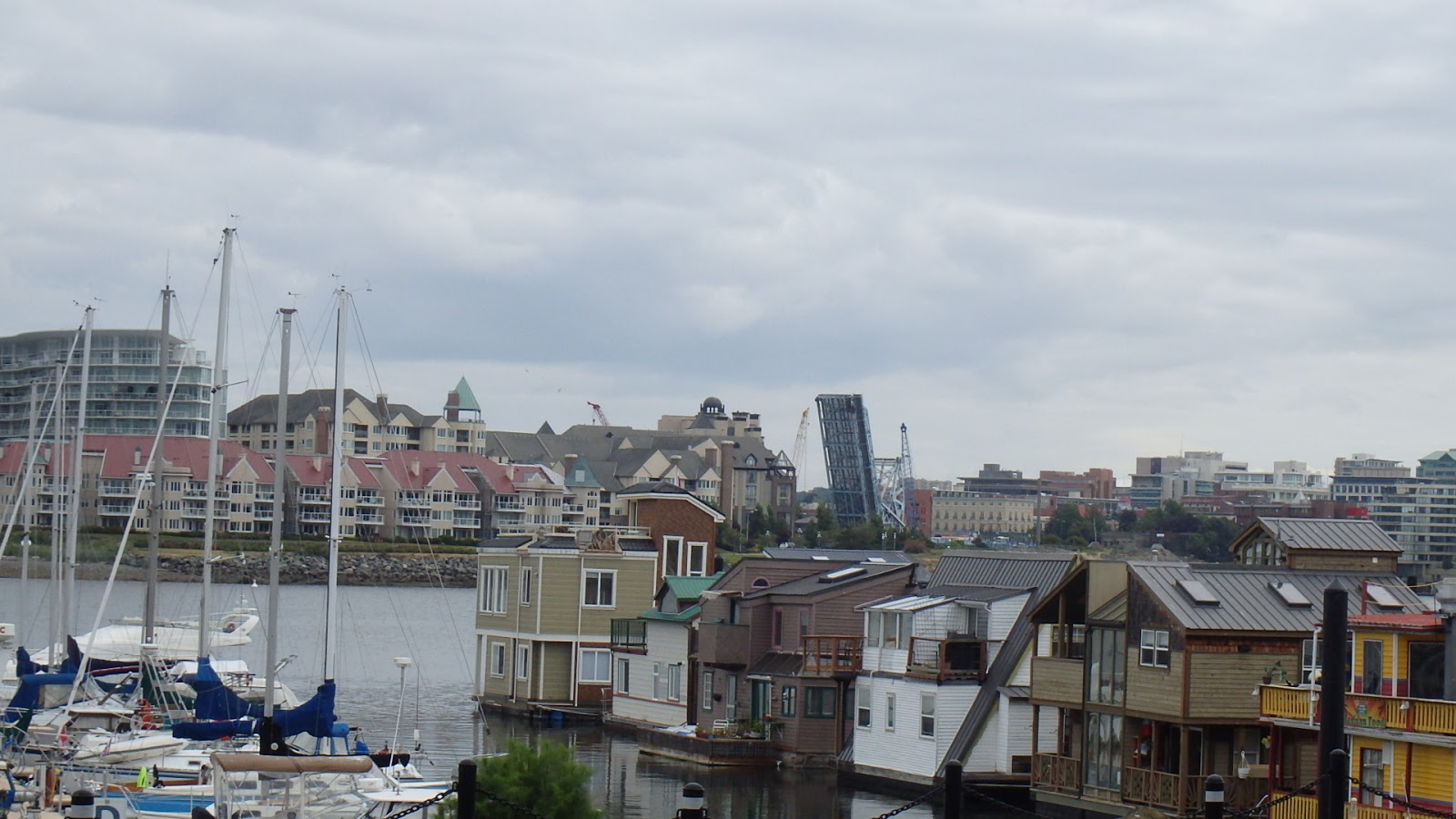 Before we knew it we'd walked to Ogden Point.  When we were on the ferry we passed it and I took a picture, but I didn't know that it was the cruise ship terminal at the time.  Not until we rounded the corner and saw the Royal Caribbean Rhapsody of the Seas in port.  I even found their cruise ship schedule online so I know the Rhapsody was heading to Seattle, Washington from Skagway, Alaska.  I later found out this was the same ship PolarBear and his wife took on their cruise to Alaska a few years ago. 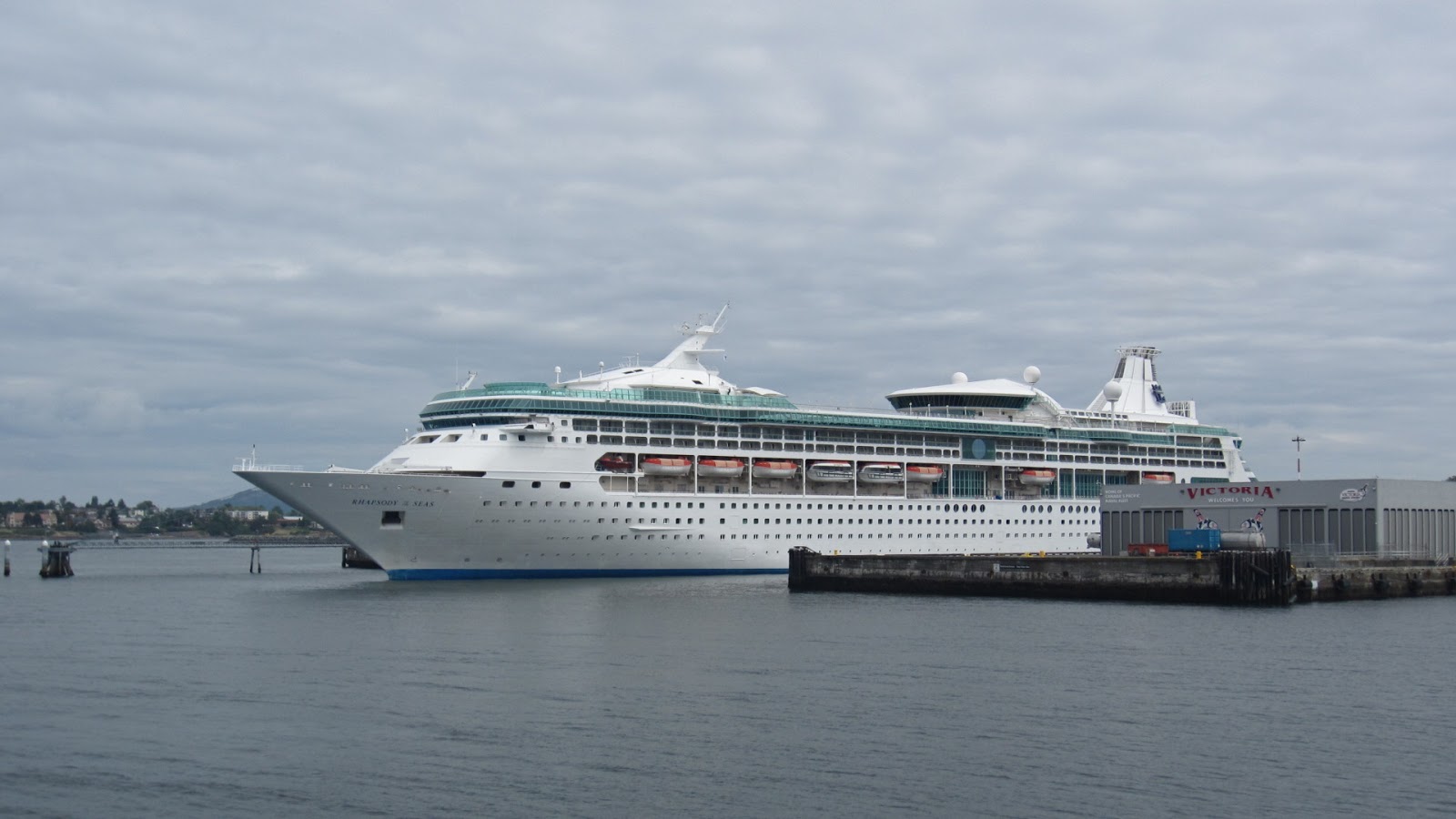 There were quite a few tugs and tankers in the straight. 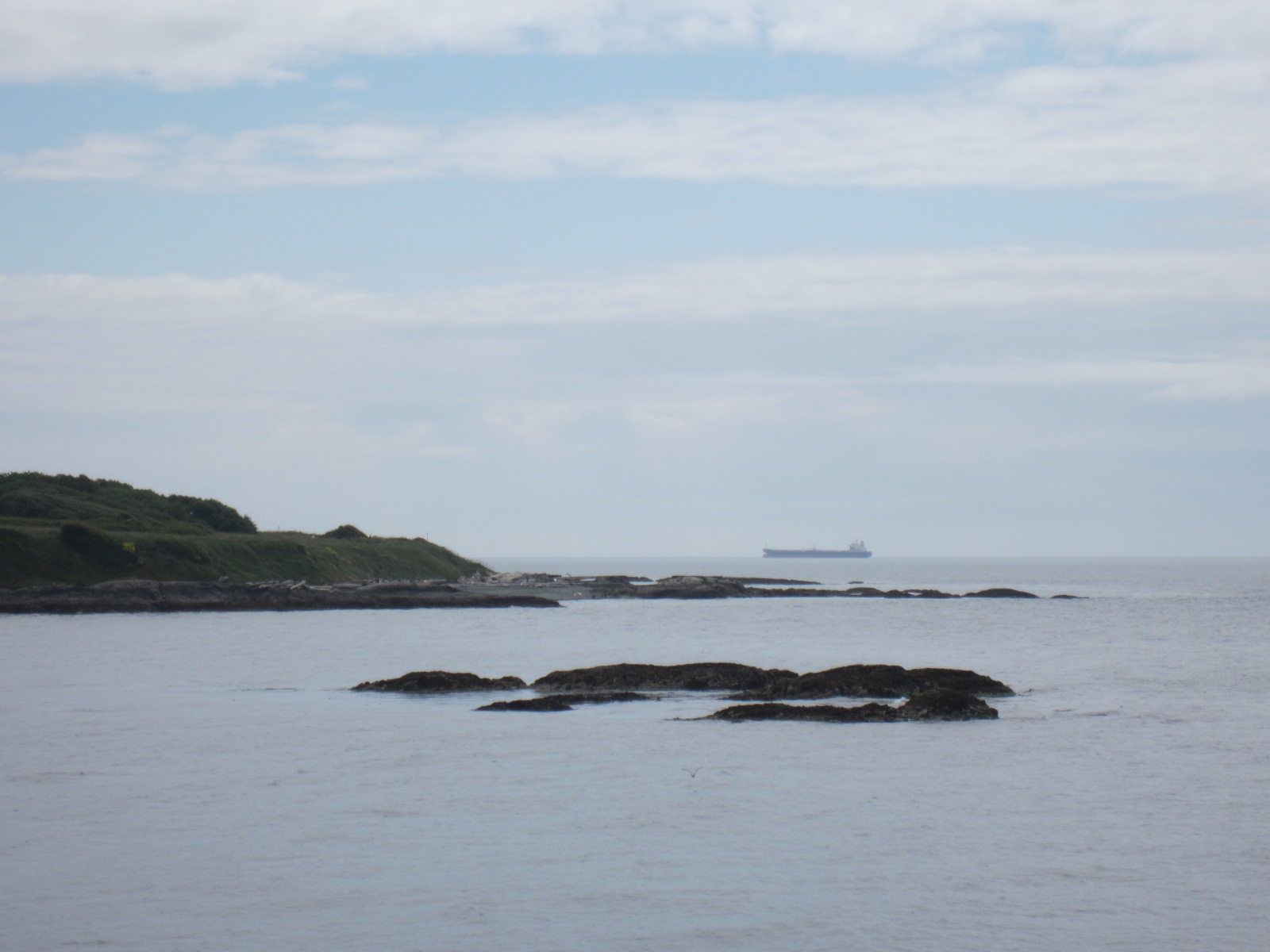 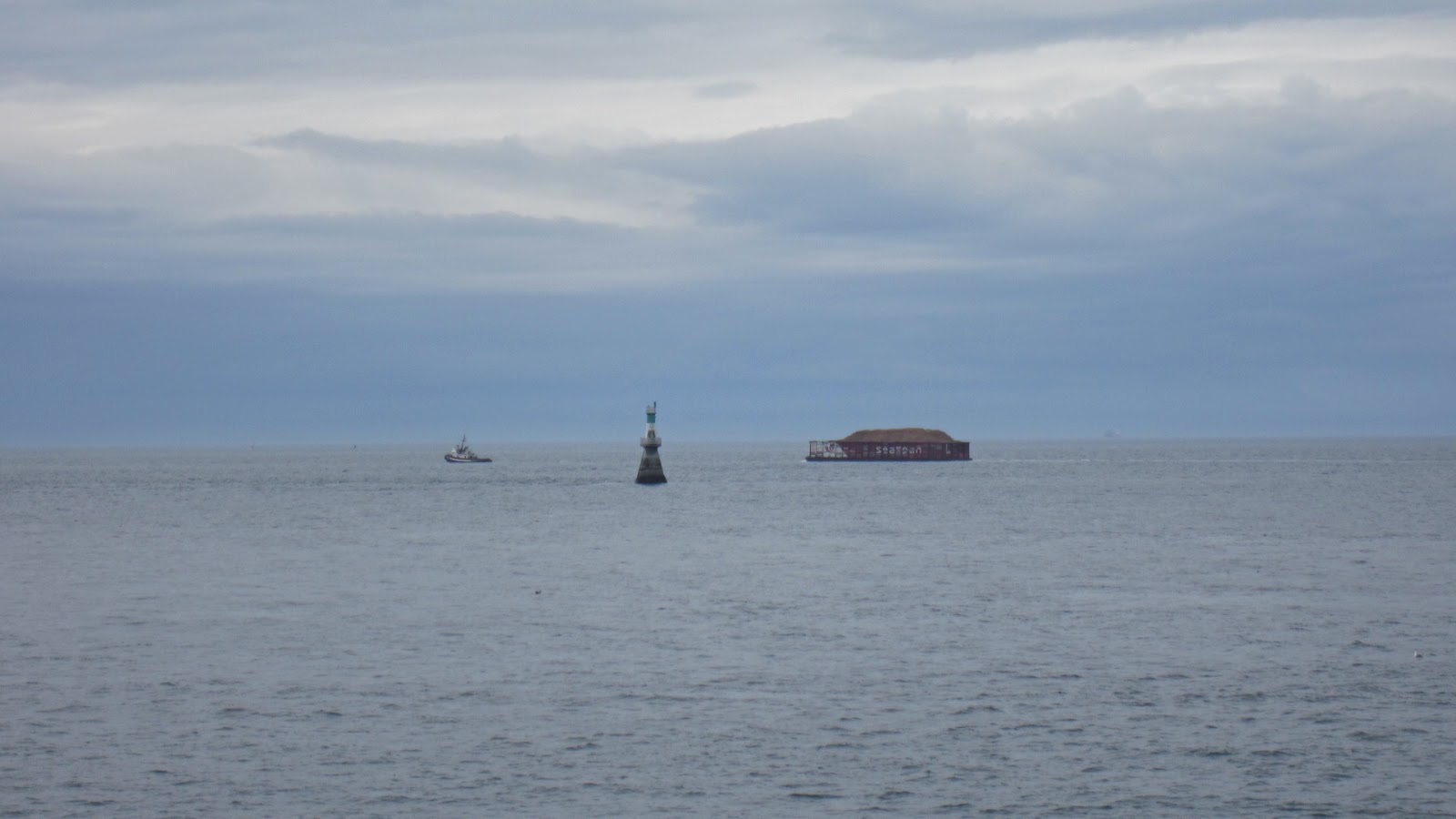 Ogden Point Breakwater Walk.   We walked to the end and back.   Luckily they installed a railing last year.  You can see the skies were still overcast at this point, but the sun was trying to break through. 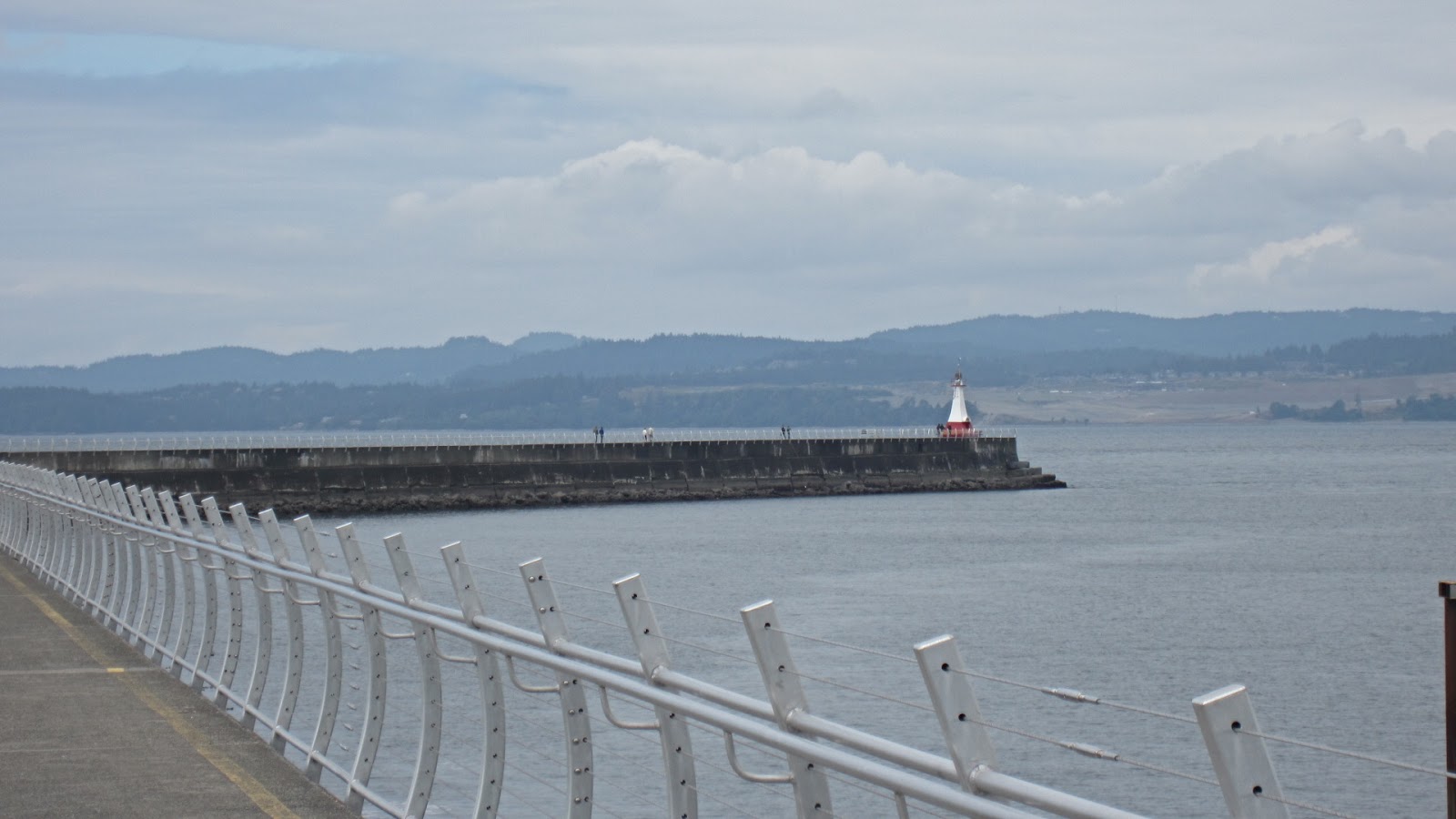 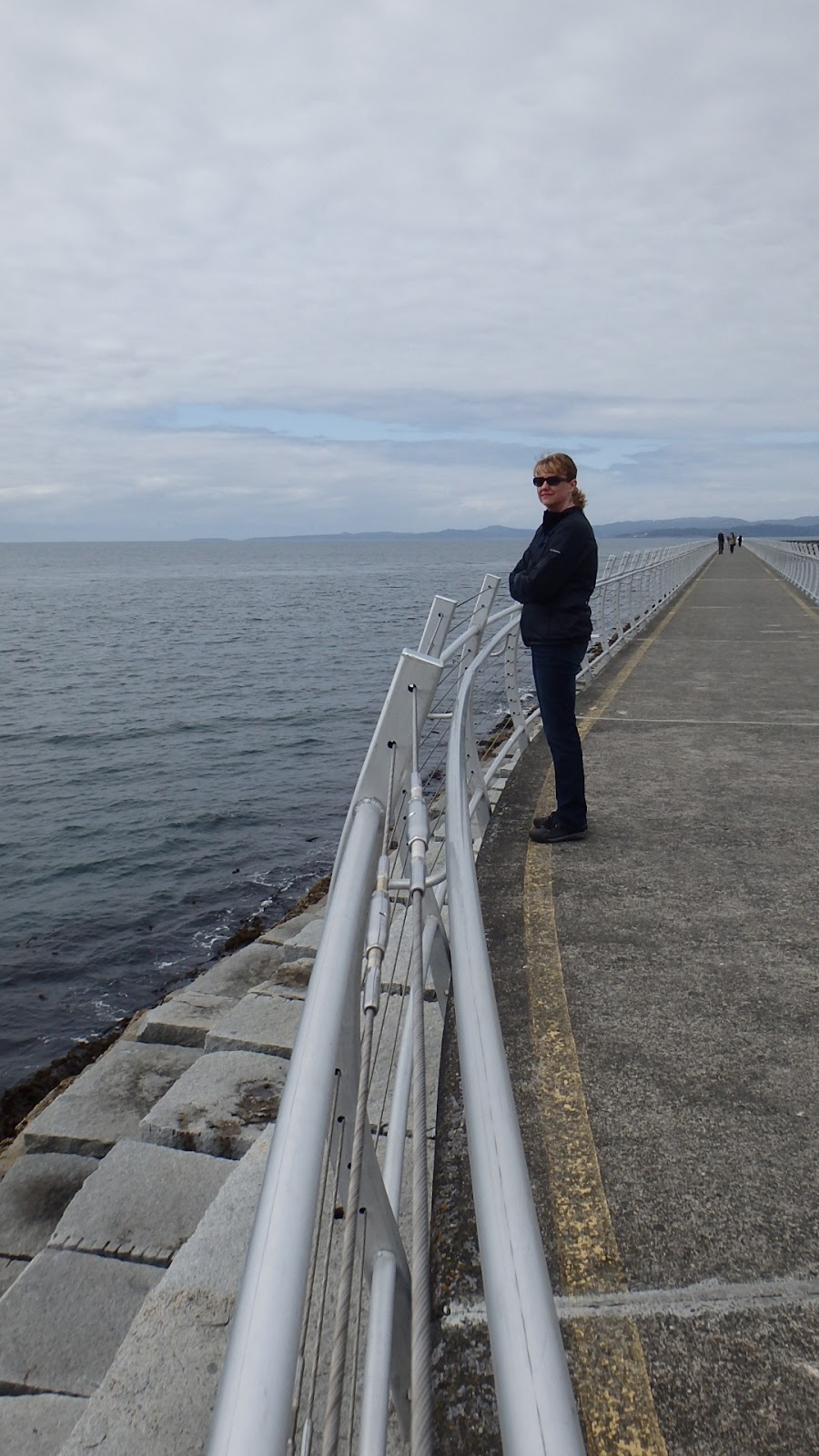 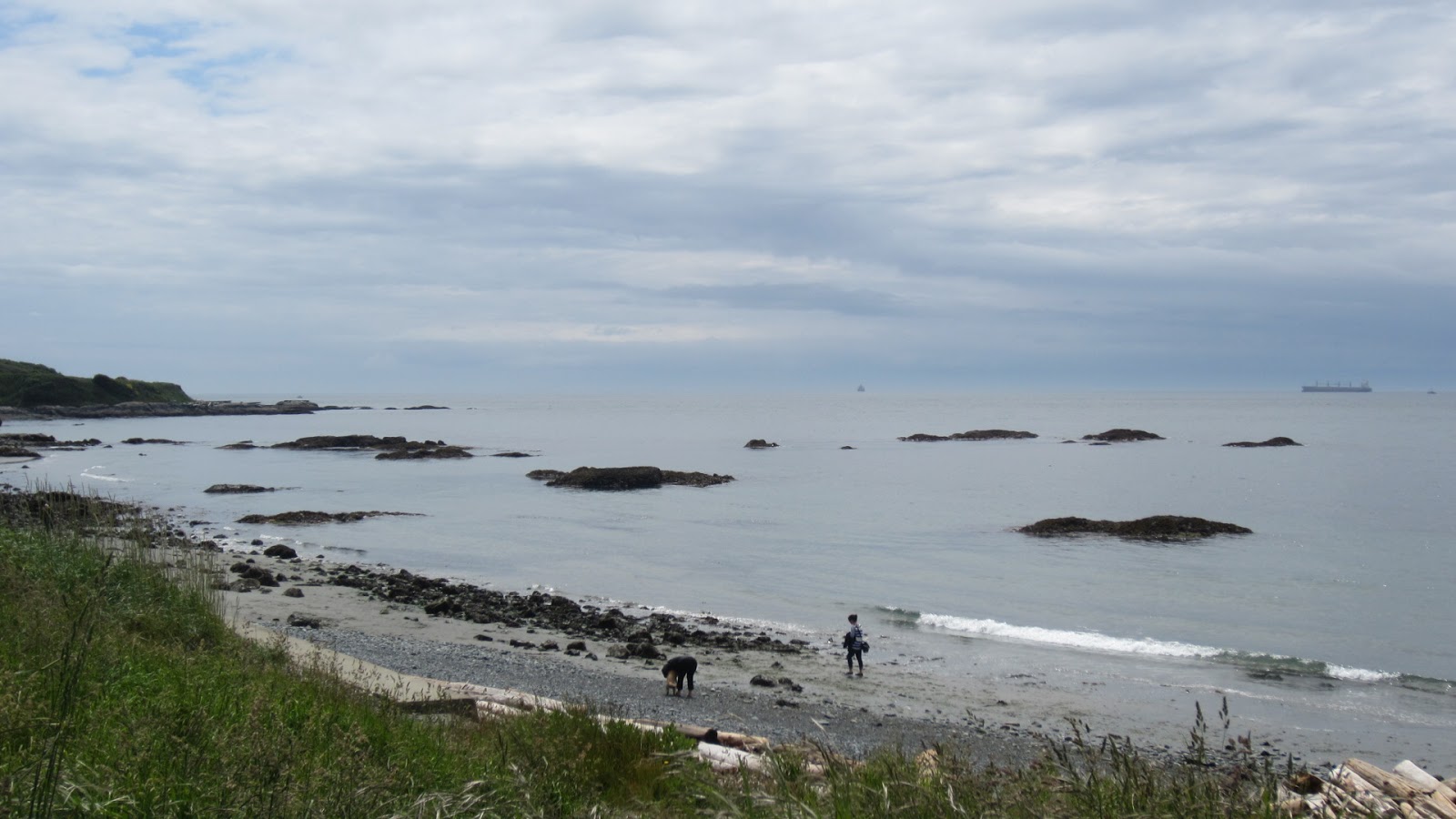 Further along Dallas Road there were odd combinations of old and new construction. 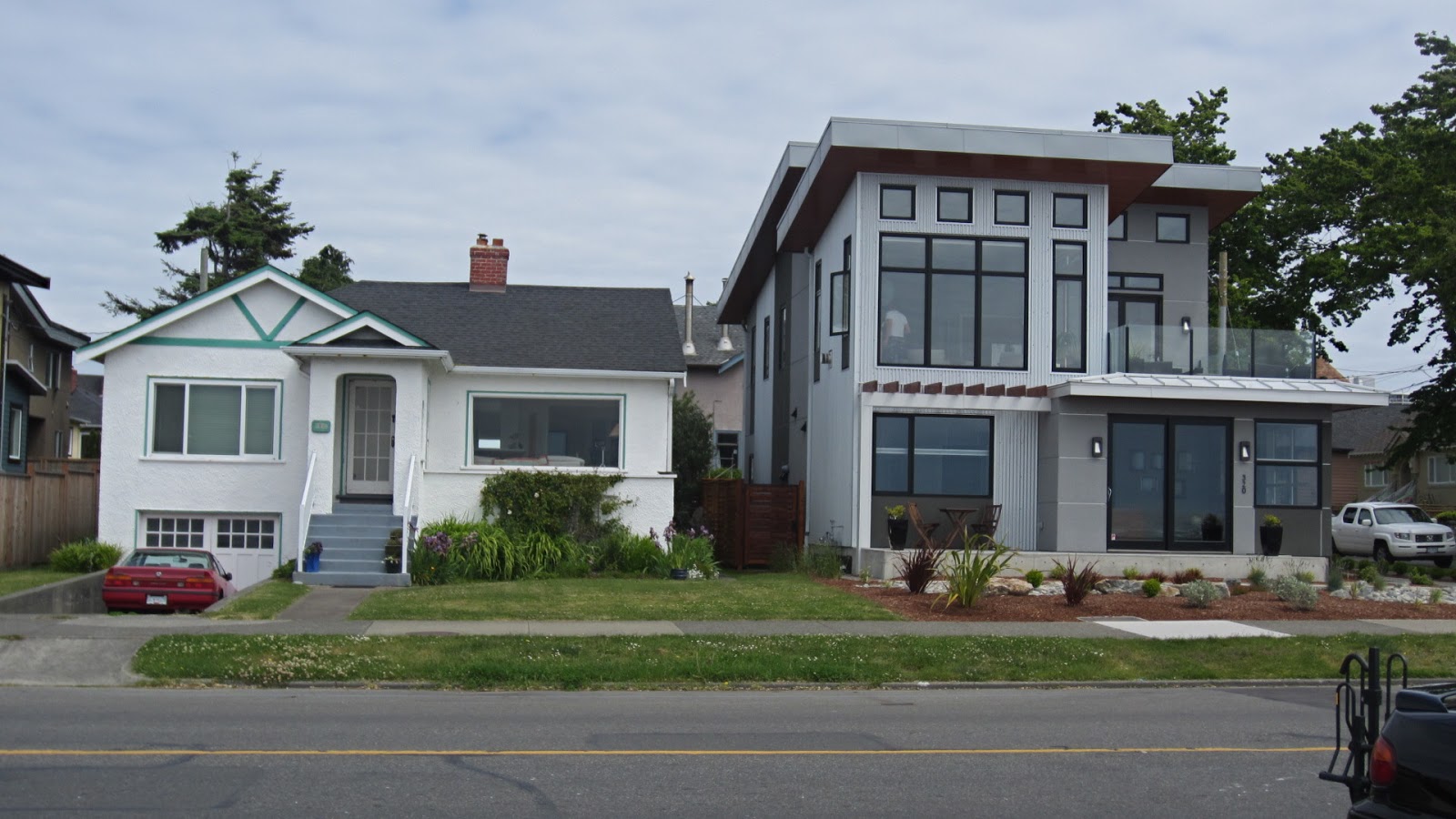 We walked around Holland Point Park and after a pit stop we found Mile 0 of the Trans Canada Highway at the southwest corner of Beacon Hill Park.

It was a bonus that there was also a Terry Fox statue there.  Being a child of the 80's in Canada, his run was a large part of what I remember of Elementary School. That and participating in local tribute runs every year thereafter.


From here we walked around the corner, through the grass, and up a trail to the flagpole and top of Beacon Hill. 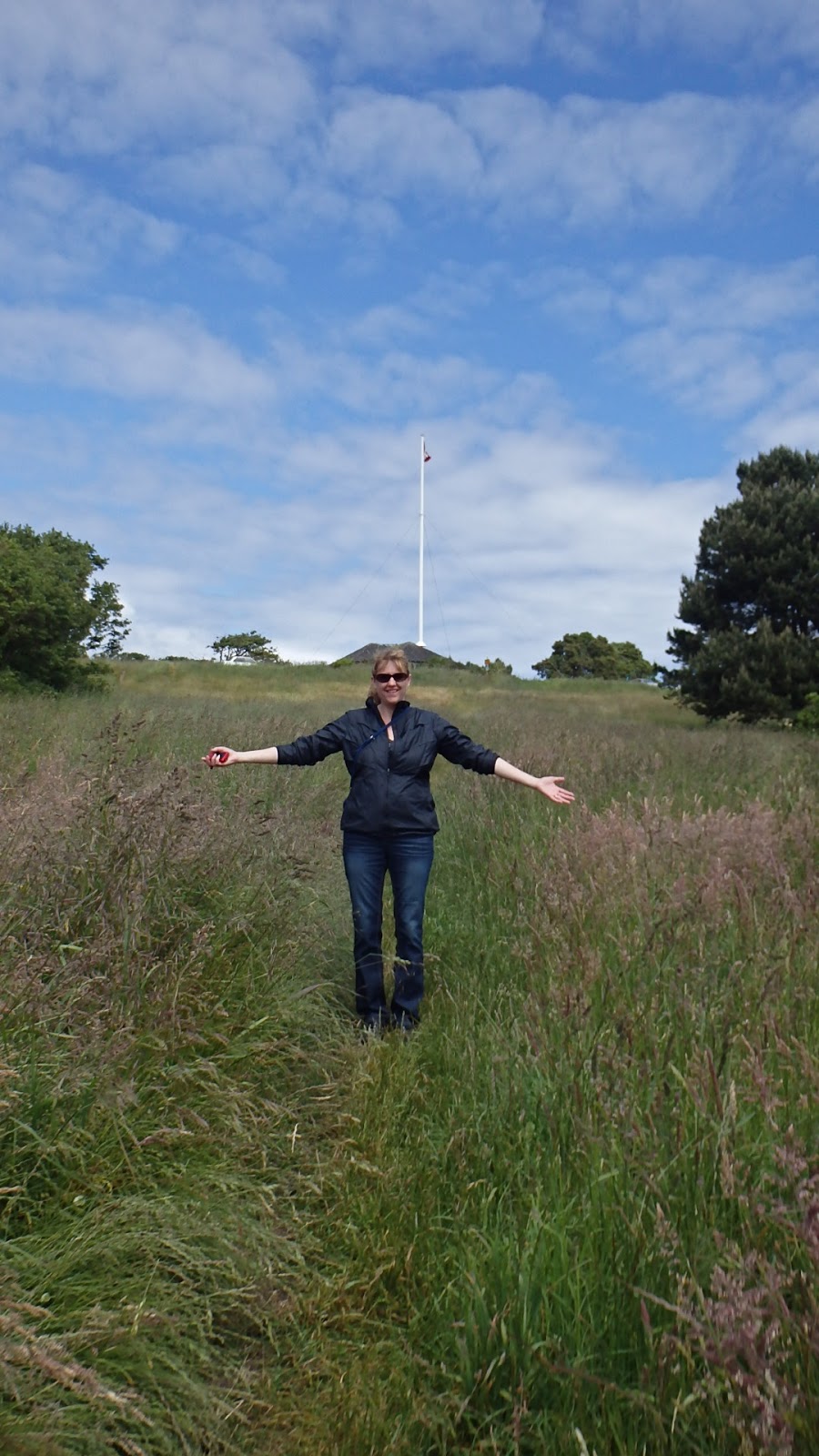 The trees told me it is usually quite windy on the hill. 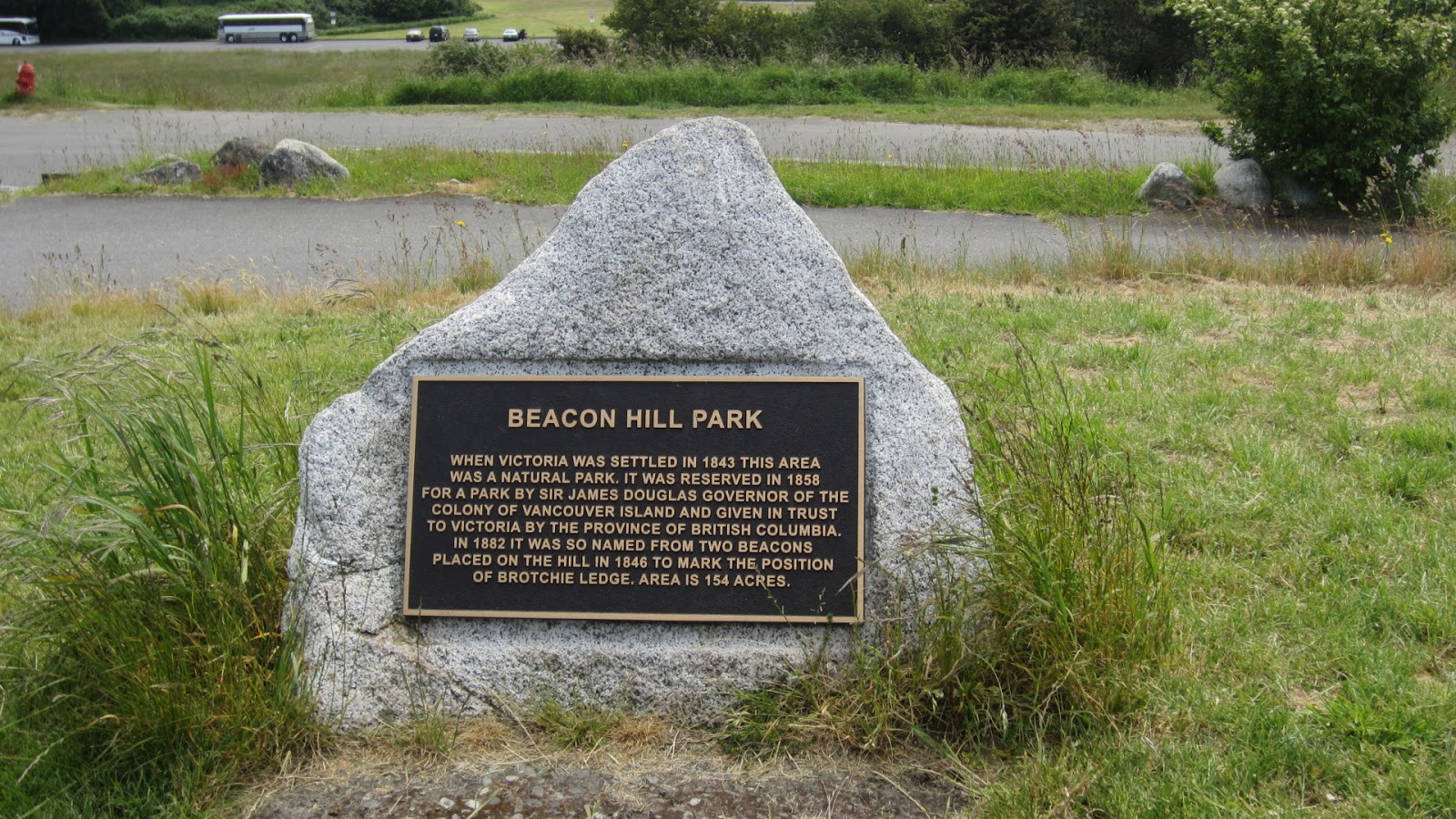 We entered the main park area beside the Children's Petting Farm.  Pet the animals, not the children.  We walked a bit and admired the views.  We were amazed at how many Canadian Geese and Mallards were wandering and flying about. 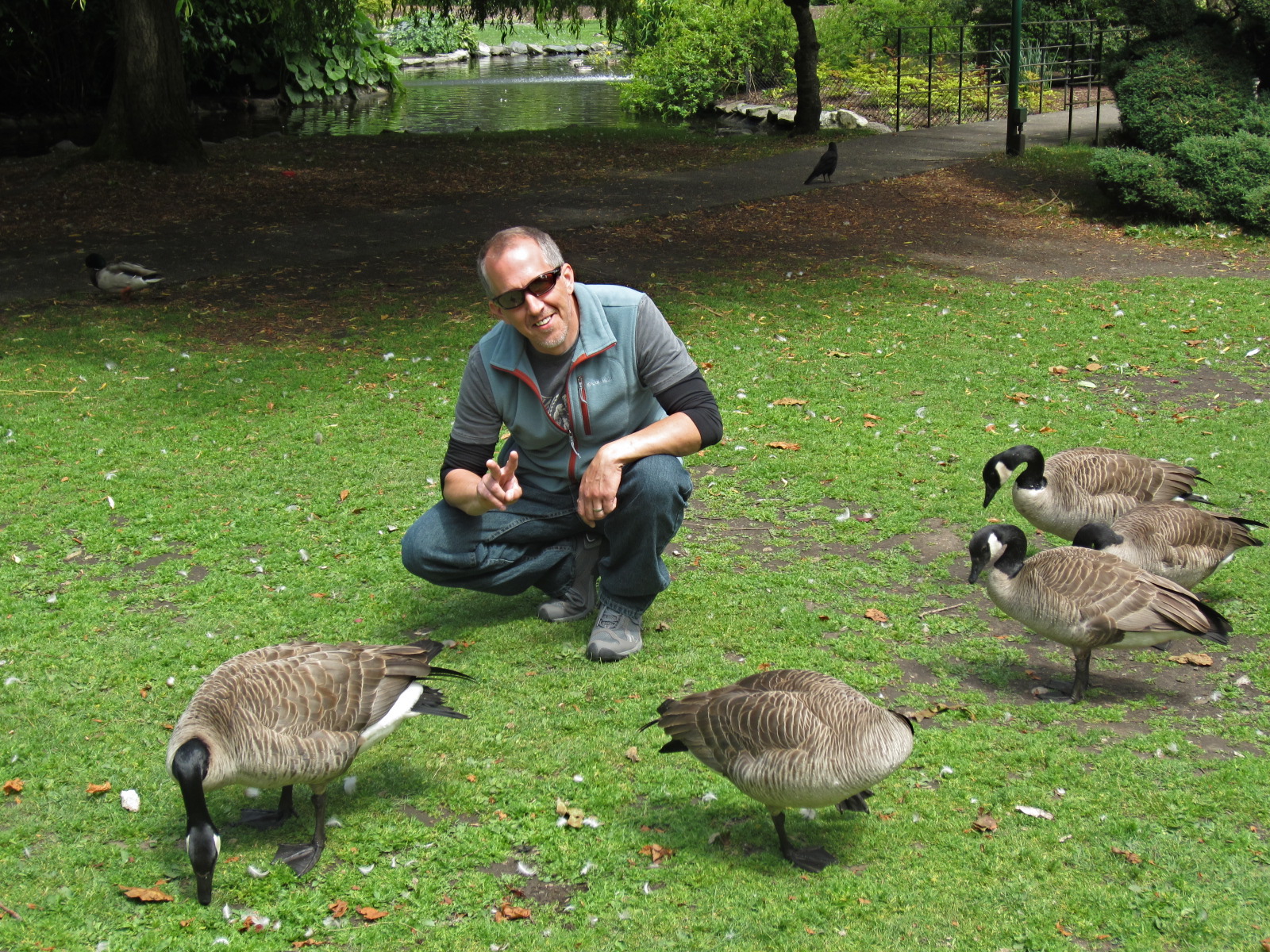 We saw a lovely stone bridge and I could have looked at it for hours.  There is just something about really old bridges that I enjoy.  This bridge was built in 1889. 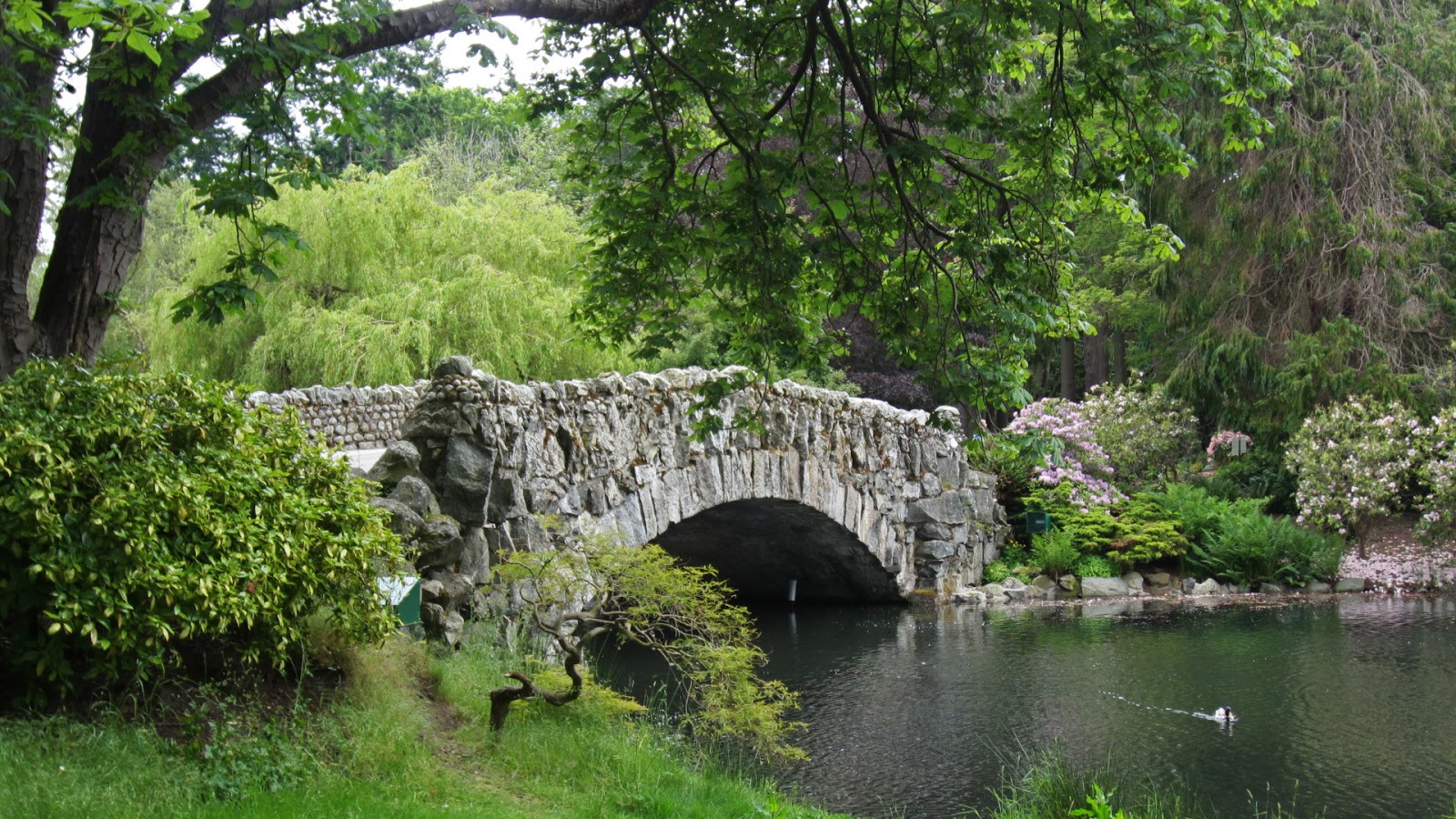 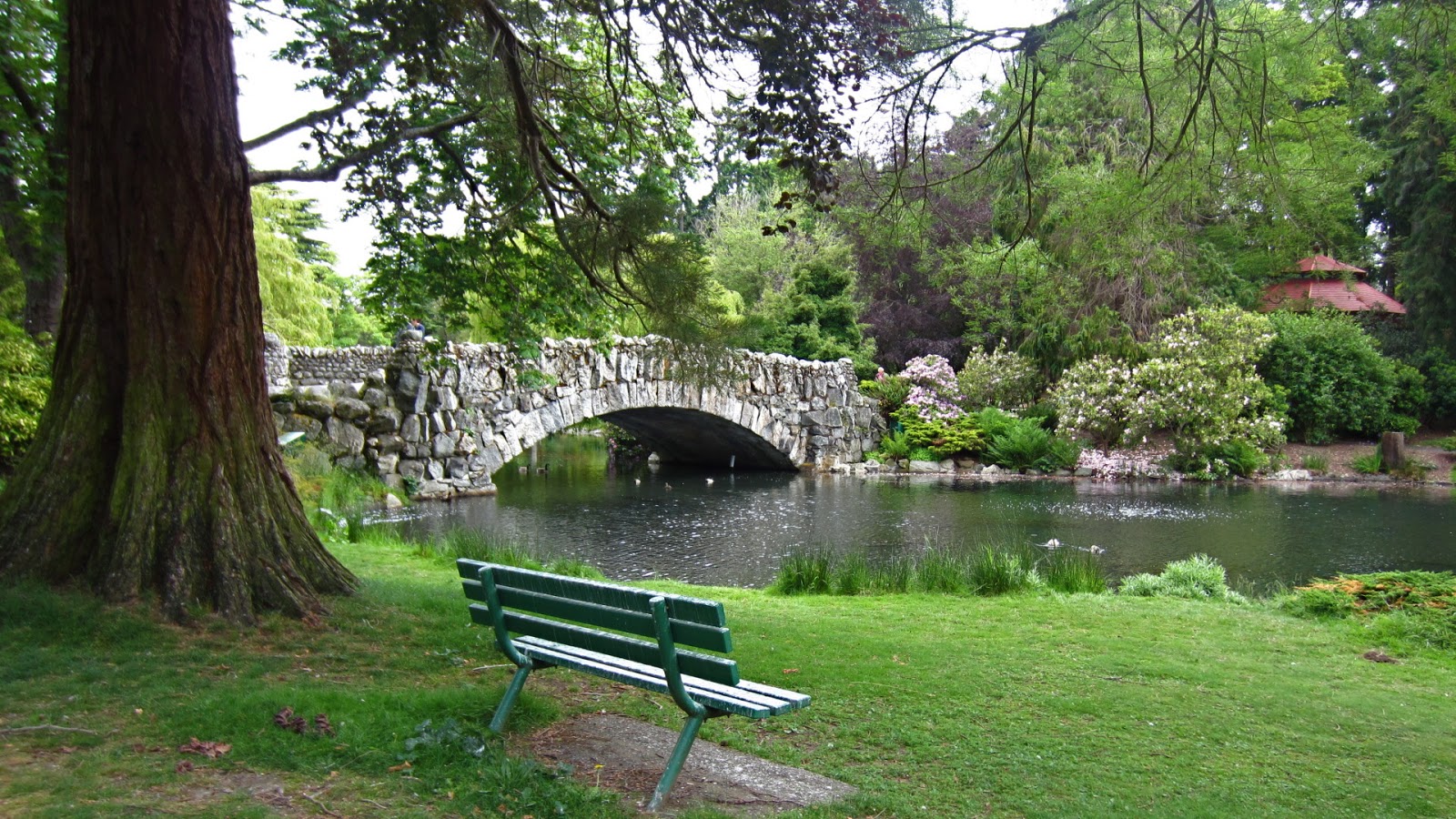 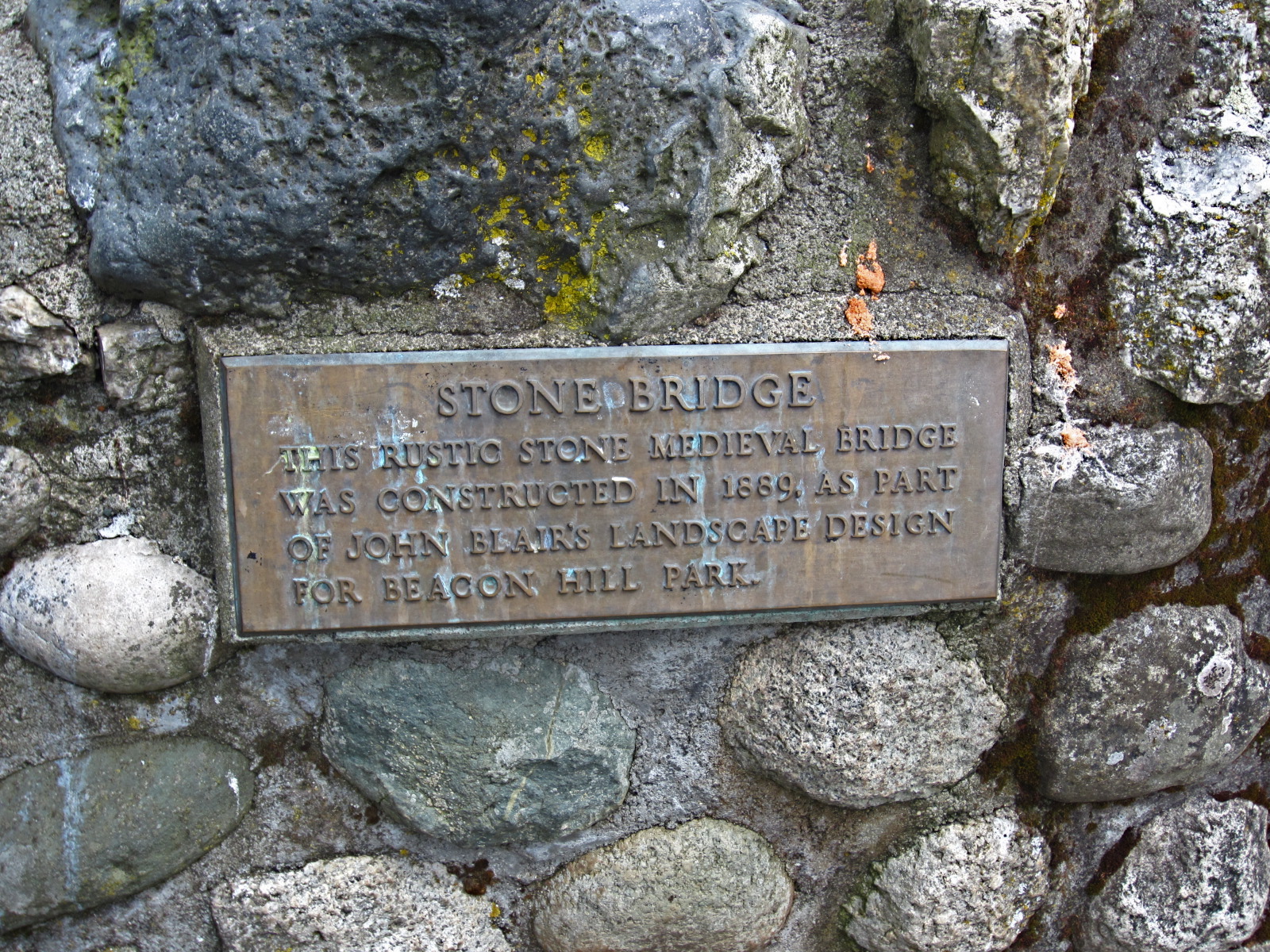 You can't see it on the photos above, but the park is the home to a Great Blue Heron rookery.  The birds were quite loud in their nests in the trees 60 feet above the ground near the stone bridge.  We attempted to zoom in for a picture of the ones we could see, but the cameras were just not powerful enough to make out the images. 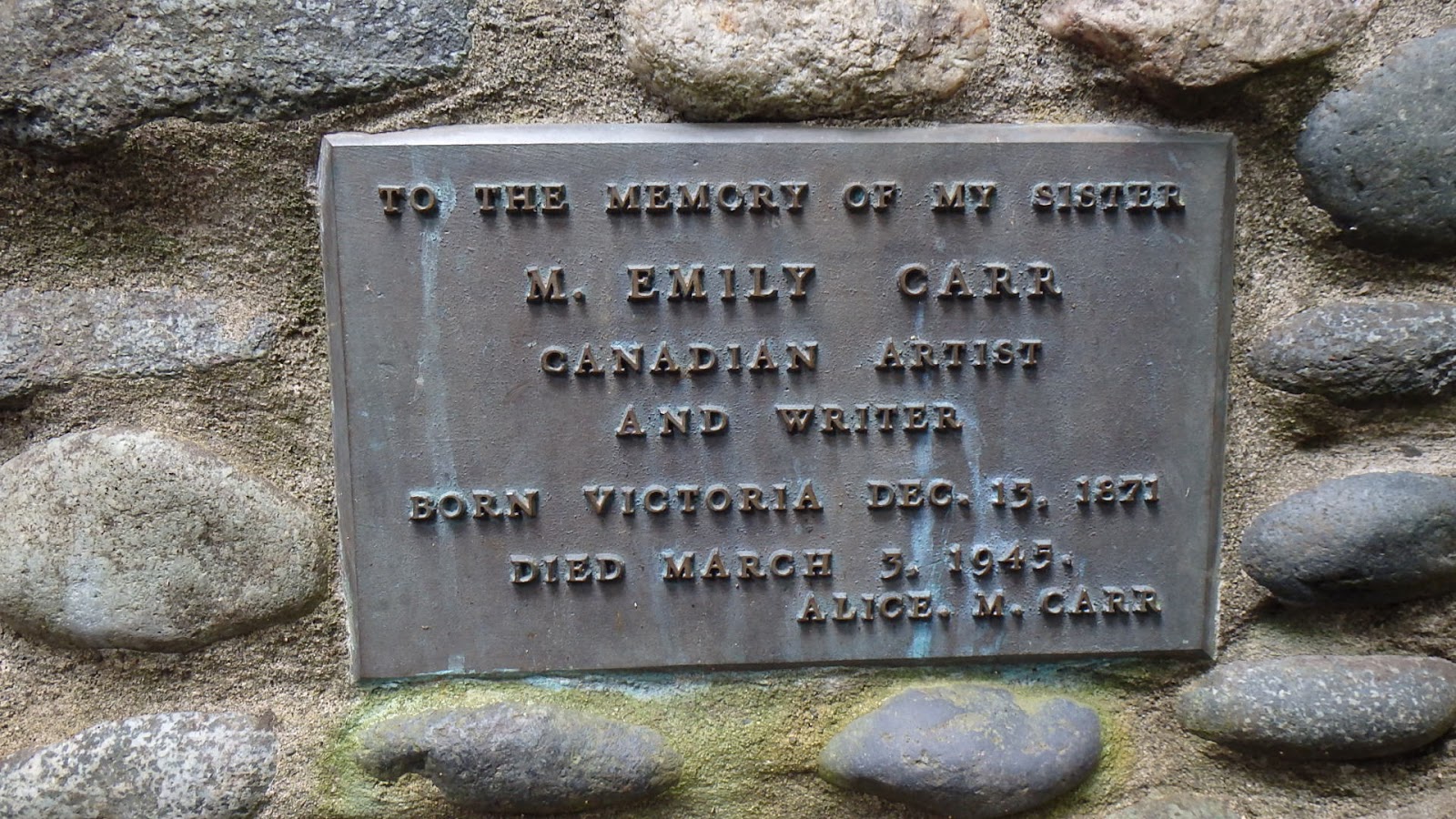 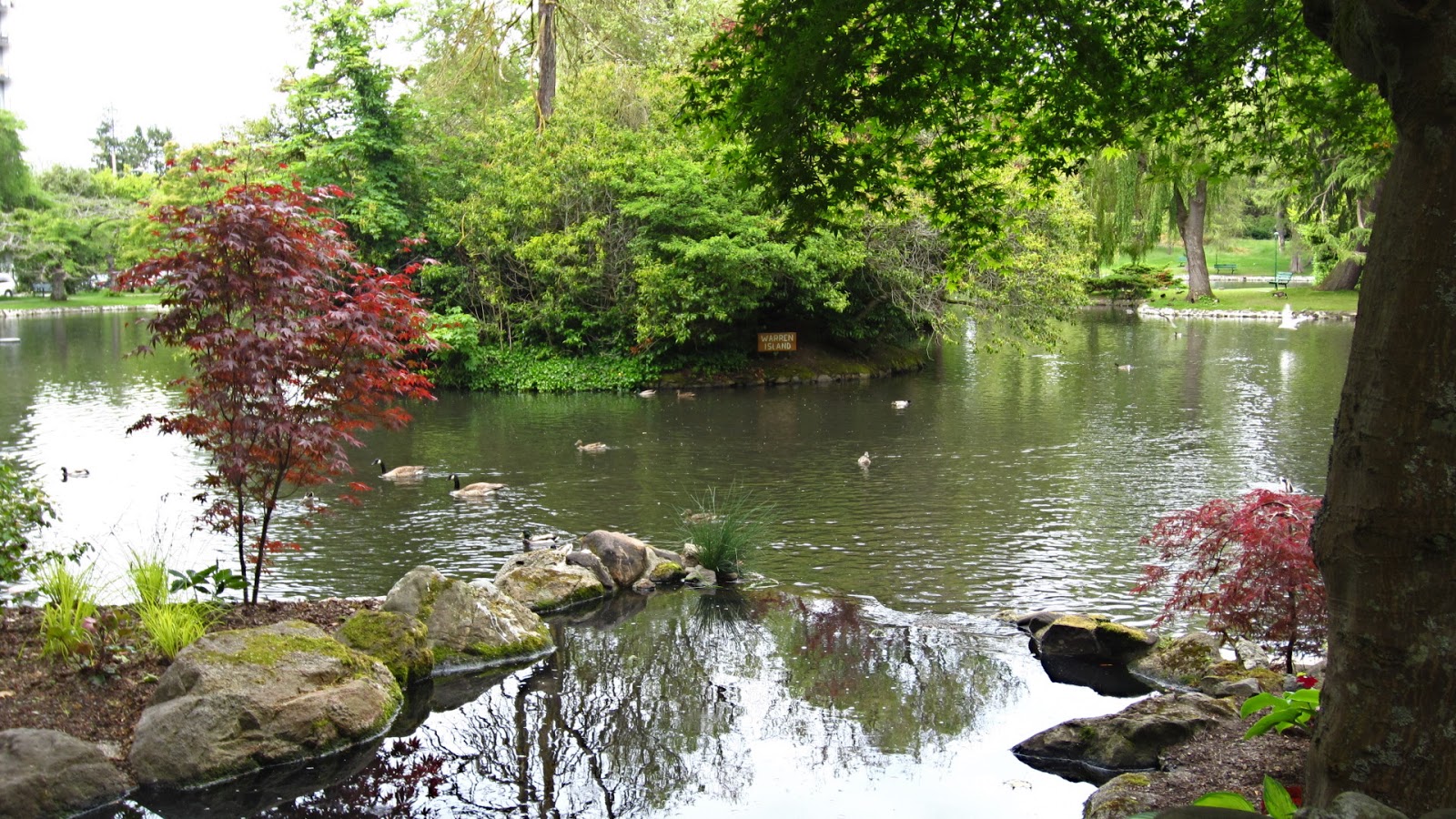 We took quite a few more pictures in Beacon Hill Park, but I didn't want this post to be too long.  I do want to say that besides meeting Princess ScooterPie and MotoMan, this was our favorite part of the trip.  We enjoyed the park more than Butchart Gardens.  There were less people/tourists and it just seemed more natural and leisurely.  We would have loved to spend more time in the park but we were starving and started walking back into town for sustenance.

As we were walking we were discussing what to do for lunch since it was after 2.  Troubadour had the brilliant idea of returning to ReBar for dessert and coffee/tea.  Brilliant I tell you.  So we continued our walk into downtown.  We arrived at ReBar and each ordered the vegan Chocolate Velvet Cake and a Soy Chai Tea Latte.  Troubadour snapped a pic of me trying to tidy my hair after walking in the wind all day.  I was looking into a mirror behind him at the time of the picture - you can actually see my eyes for once. 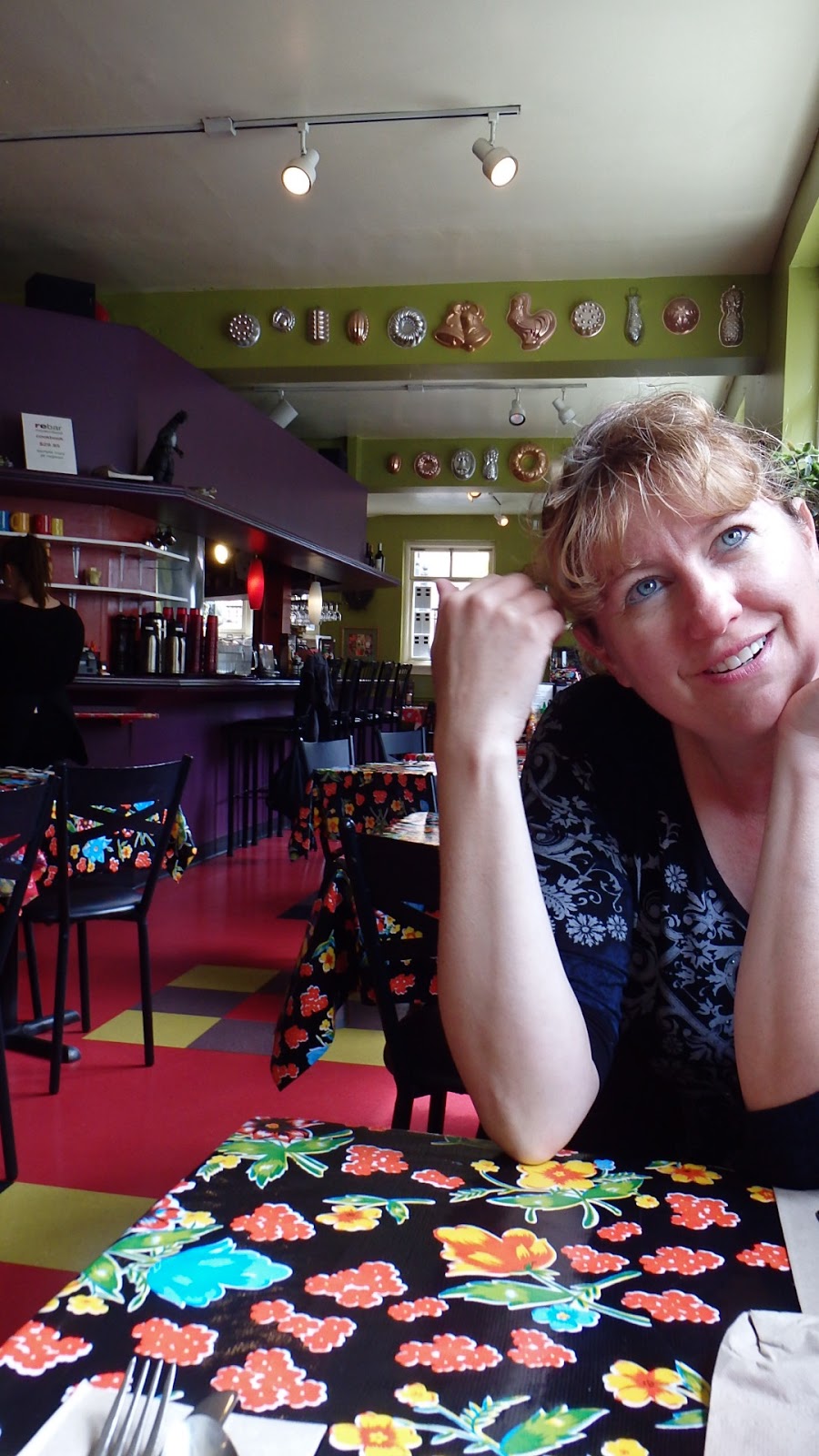 Technically we didn't have 'high tea' while in Victoria but we did have chai tea - does that count? After ReBar we made our way back to the hotel, checking out restaurant menus on display as we walked by - pondering where we might want to go for dinner later.  We arrived at the hotel and took a little break.  I believe we walked around 10 miles this day.  Oh look, housekeeping left us cookies once again.

Princess Scooterpie suggested driving Dallas Road around the loop quite a bit further than we walked.  It is an enjoyable motorcycle ride for her and we wanted to see it too.  We got in the trusty Subaru and headed out.  It was a cute little two lane road that went around Ogden Point where we'd walked earlier and kept going.

There were great views of the strait and a few marinas along the way. 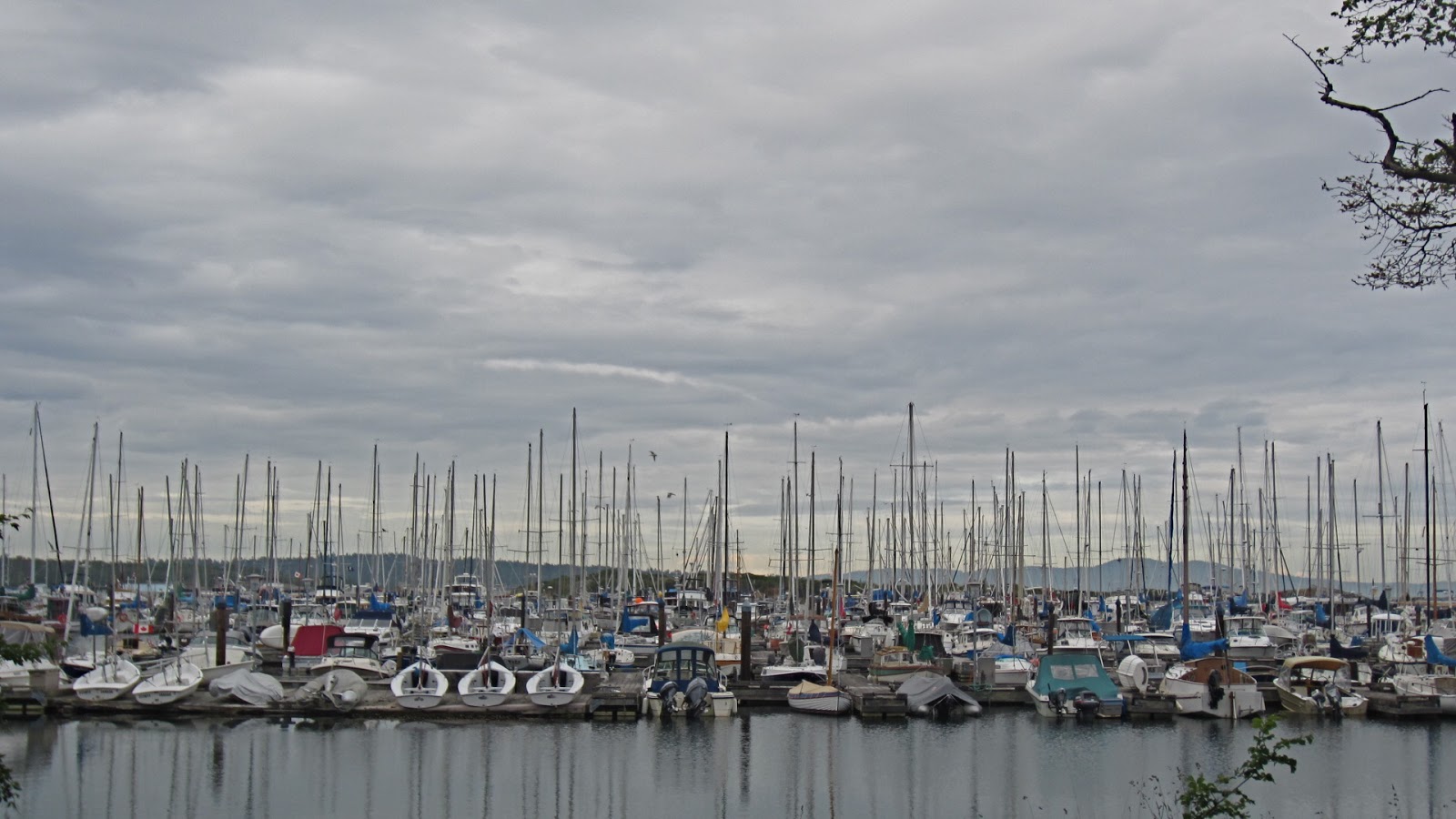 Because of the time, we thought we'd best make a quick drive by Craigdarroch Castle then find dinner.  The castle was built by Scottish Immigrant Robert Dunsmuir, who made his fortune on Vancouver Island coal.  The castle was built between 1887 and 1890.  More information can be found on the Castle by clicking this --->LINK.  The castle was closed when we drove by, so I just took a few pics from the outside.  I was surprised at how many limousines of tourists were still arriving.  I think it was almost 6 pm by this time. 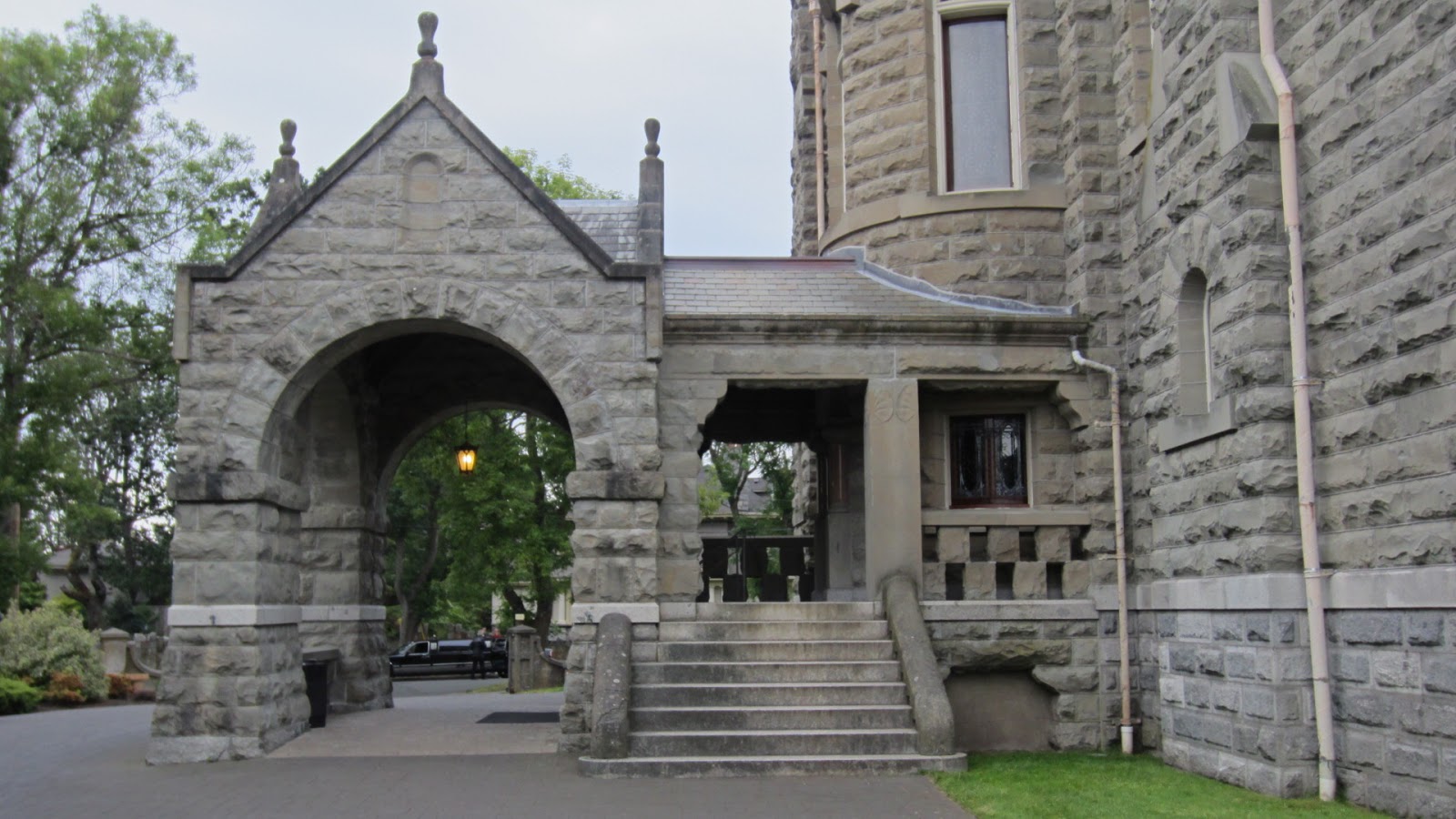 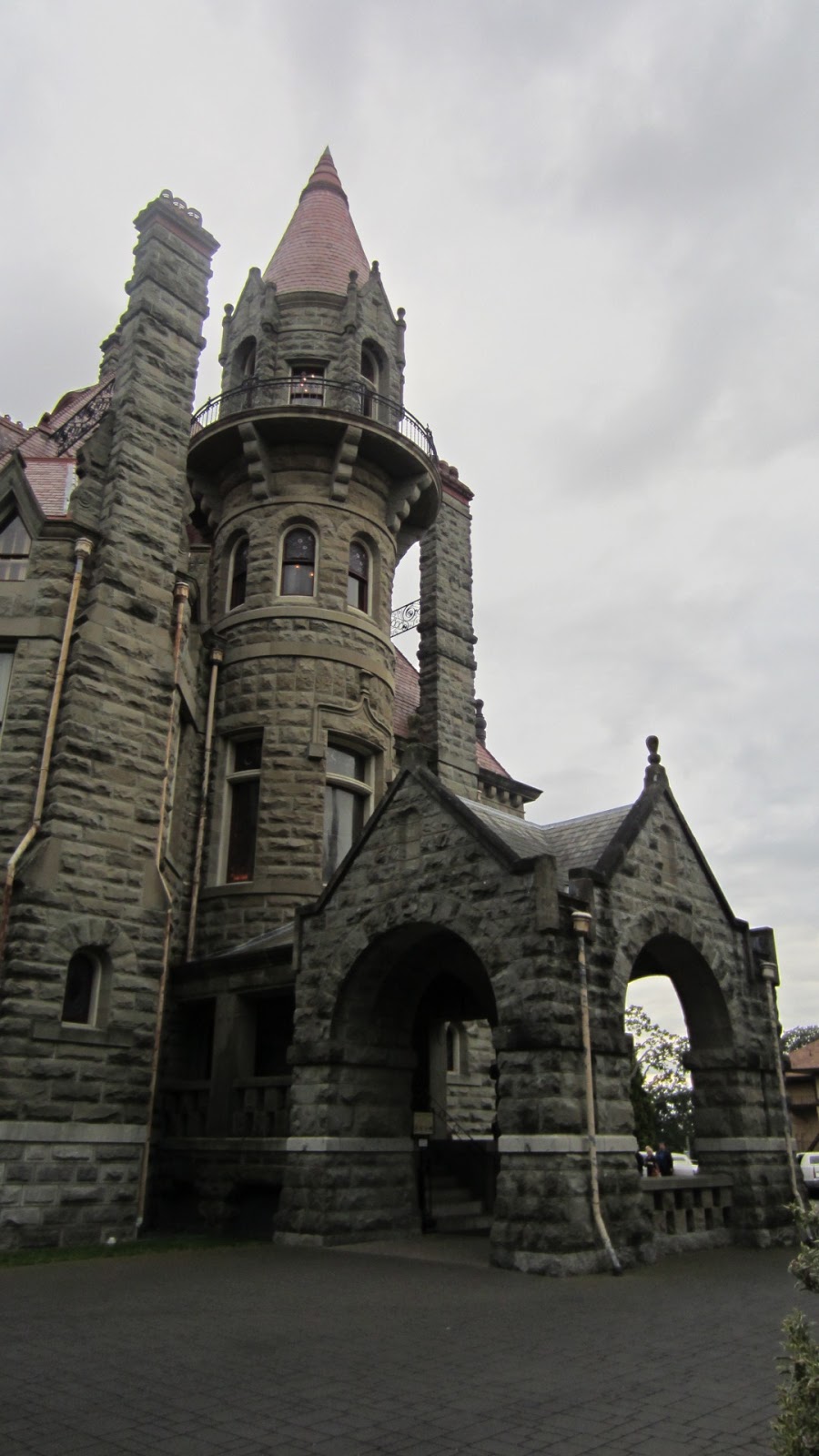 As we drove back into downtown we stopped for dinner at The Joint Pizza for some vegan pizza. This was particularly special to us because we have not been able to go out for pizza in the almost three years we have been vegan.  No pizza place in Corvallis actually uses vegan cheese, and cheeseless pizza is not that great.  The joint uses Daiya, our favorite vegan cheese to use when making homemade pizza.  It is made in Canada.  The Joint was very vegan friendly and even had gluten free crusts for those that cannot have gluten.


Because our lunch was so small (just the cake and tea) we actually ate the whole pizza.  Good thing it was thin crust.  From here we drove back to the hotel and just chilled out for a few hours.

Friday morning we were up and out of the hotel by 8:30 am and heading to the ferry terminal. When heading back into the USA you need to be at the terminal 90 minutes early.  It was a fairly smooth drive home except for Friday afternoon rush hour traffic in Portland.  We stopped at Native Foods for dinner and finally arrived home about 8:30 pm.  A long day.

Basil was happy to see us.  He was hiding under the covers in our bed, per usual.

I hope you enjoyed our recap of Victoria.  We enjoyed our trip.  I believe we have some random photos that were never posted too.  Over 800 were taken on our two little point and shoot cameras and I still have one camera to download, the big Canon, but I don't think it was used much.  I may do a follow up post with some randomness and I know Troubadour has thoughts for a post or two of things I didn't mention.  He is teaching Team Oregon classes 4 out of 5 weekends in June so he needs to find some blogging time in order to post anything.

" A passport, as I am sure you know, is a document that one shows to government officials whenever one reaches a border between counties, so the officials can learn who you are, where you were born, and how you look when photographed unflatteringly." - Lemony Snicket
.
Posted by Trobairitz at 5:01 AM