Not much happening on the riding front unless you count hubby teaching more classes.  We rode the bikes to coffee and back last Saturday and Max turned over 8,000 miles on the odometer when we rode to Mary's Peak two weeks ago.  That ride was detailed in my June 17th post. Doesn't seem like many miles when you consider I've had it for two years.

Sunday it started to rain and by Thursday it stopped and Friday temperatures climbed into the 90's with no transition period.  A little too warm for comfort.

I took the opportunity of some down time to take a few pictures of what is blooming in the yard and a bit of the garden art.  Just for fun I used the 'pin hole' feature on the camera for most of them.  These were taken last Saturday and this morning.

The lawn is still fairly green.  Our warm spell/heat wave is supposed to last all week.  I anticipate a brownish lawn by Friday.  We typically do not water our lawn in the summer, but choose to let it go dormant instead.  We use our water resources to keep the trees and shrubs alive.  We are on city water and our monthly bill historically will double during the summer.

We have a long weekend coming up next week so maybe we'll get out on the bikes if we want to dodge holiday traffic.  We normally stay off the roads during national holidays.  Especially big drinking holidays like the 4th of July.

Safe travels to all out riding.

"A Morning-Glory at my window satisfies me more than the metaphysics of books." - Walt Whitman
.
Posted by Trobairitz at 9:28 AM 28 comments:

Saturday dawned beautiful and sunny with forecast highs in the valley to be 84˚F (28.8˚C).  We initially intended a ride to the coast to escape my allergies but with a high in Newport of only 58˚F (14.4˚C) we decided against it.  No need to freeze at the coast when we can stay toasty warm in the valley.

We rode to coffee and talked about where to ride. With no decision made yet, we headed downtown to my office to leave our gear while we walked to the post office (the rack was delivered for the XT) and had Indian buffet for lunch.  Tasty, but we ate too much.

After lunch we decided it was too darn nice to go home and Troubadour pointed us south with intentions of riding the Alsea Falls twisties.  We took a slightly different route which put us on Highway 34.  A left turn took us through the hairpin twisties and the road to Mary's Peak in the Siuslaw National Forest.  With Troubadour in the lead he opted for a scoot to the top on Mary's Peak - a detour of just over 9 miles of twisties each way.  It is a narrow 1.5 lane paved forest service road with no dividing line.  I don't usually like it due to the high number of jacked up pickup trucks barreling down the mountain on your side of the road while trying to pass the bicyclists. Saturday was better.  There didn't seem to be as many people out and around, maybe because Oregon State University's commencement was the same day.

Fun fact - Mary's Peak is the highest point in the Oregon Coast Range at 4,097 feet.

We took a few photos while at the top. 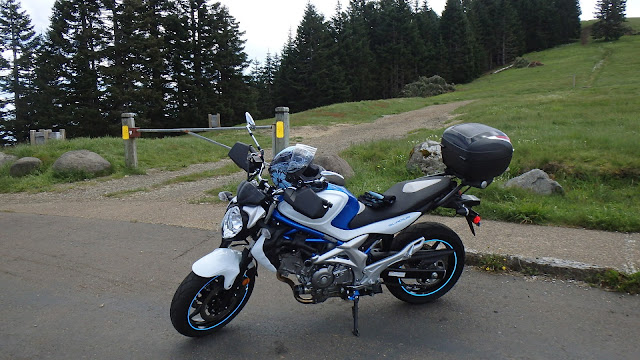 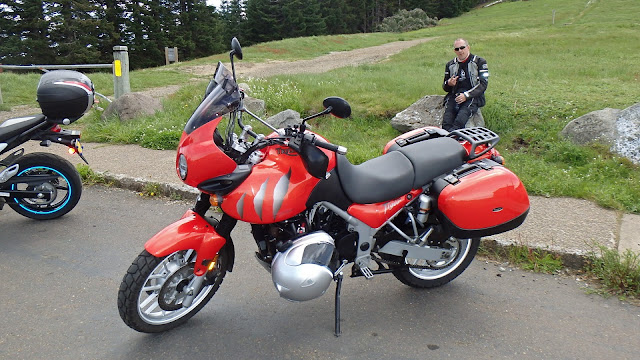 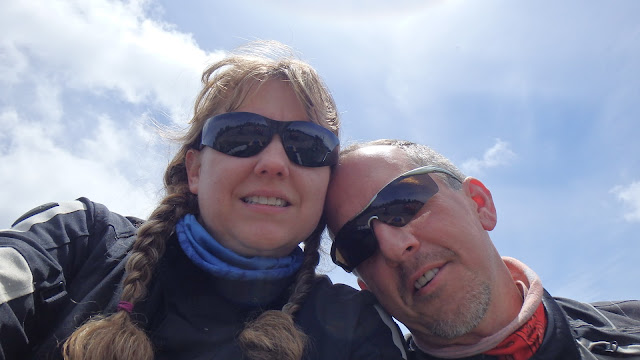 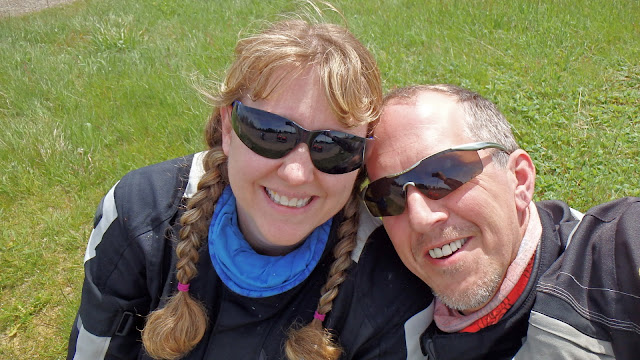 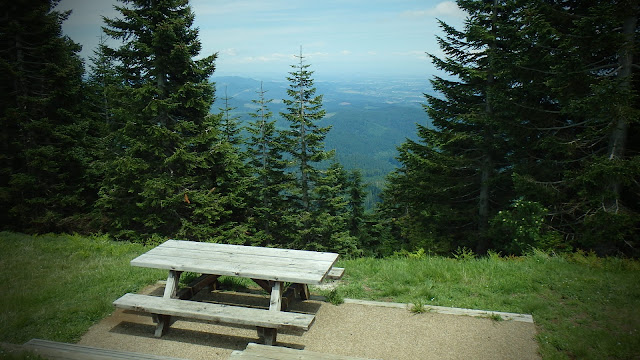 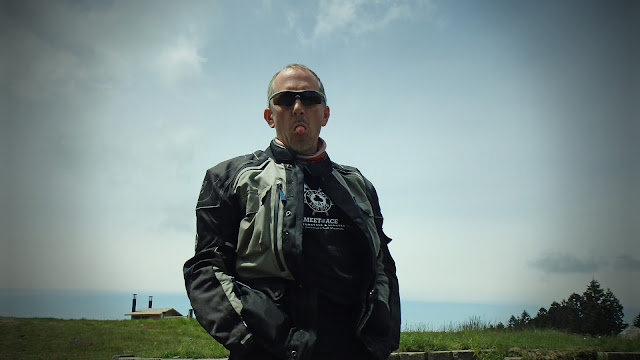 Back down the twisties to Highway 34 and then towards Alsea.  We made a left turn in Alsea to ride by Alsea Falls and into Alpine.  Judging by the number of cars parked along the road we opted not to stop at the falls thinking it was busy enough to fill the parking lot and those cars were the overflow.

The road around Alsea Falls, until you get close to Alpine, is a 1.5 lane road with no dividing line as well.  Very popular with motorcyclists and bicyclists alike.

From Alpine we turned North and headed home.  It was only a 100 mile loop but Max's odometer did turn over 8,000 miles finally.  About time.


Yesterday just after lunch I was sitting on the sofa something caught my eye in the front yard. I thought it was a large dog until he raised his head.  Not nearly as dangerous as the bears others have been seeing and he was kind enough to 'fertilize' the front lawn while he was there too. 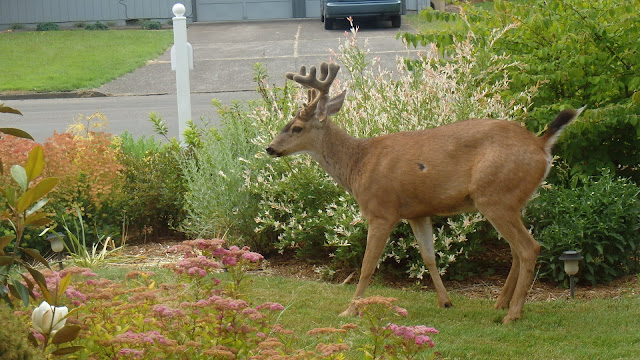 "You never really learn to swear until you learn to drive." - Author Unknown
.
Posted by Trobairitz at 6:34 AM 36 comments:

One of the issues with having two bikes and only one hard top case is that it was a pain to switch them back and forth between the Gladius and XT since neither had a proper rack.  Lucy has her own matching orange top case.

I am incredibly spoiled so Troubadour ordered a new top case and rack for Max.  The smaller hard case I'd been using didn't have a rack so Brad would strap it down to the pillion seat giving me locking storage when needed.  A Yamaha rack is also on order for the XT so that the old case can be affixed to it properly.

Last Tuesday the rack and B33NMK Monokey top case arrived and we installed it Friday afternoon. 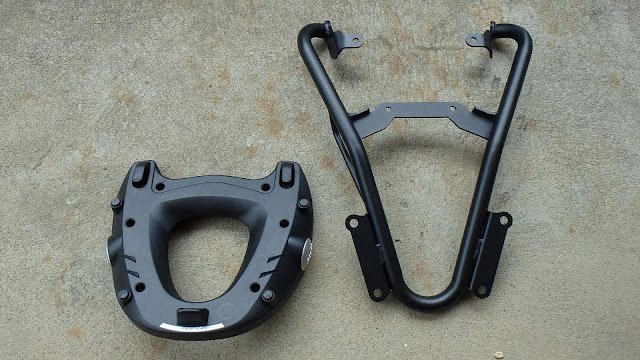 It looked to be an easy install.  Off came the seat. 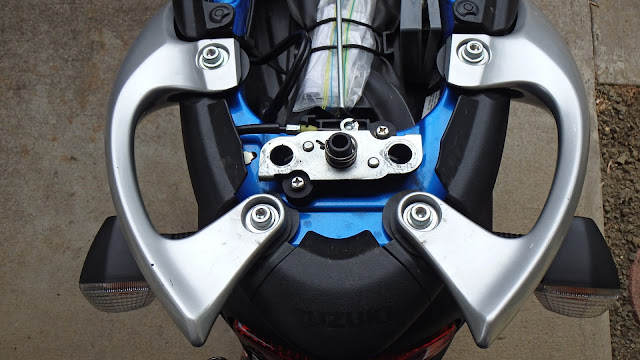 Undo four bolts to take the grab rails off. 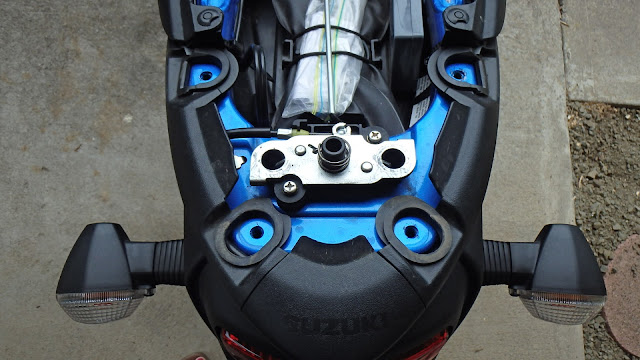 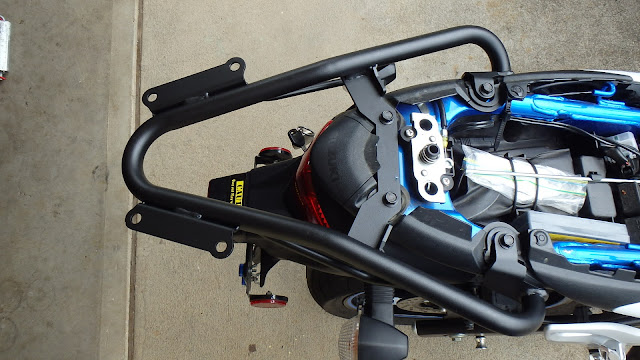 Attach base plate to rack with another four provided bolts. Place covers over the bolts. 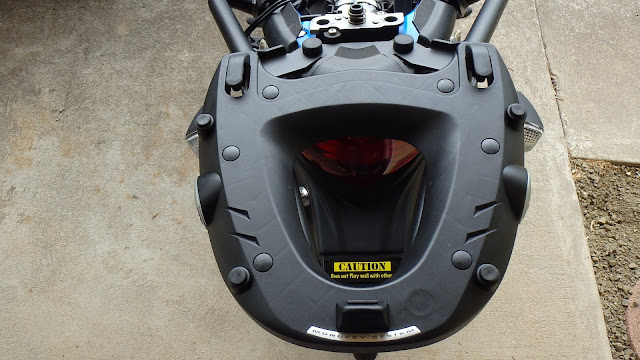 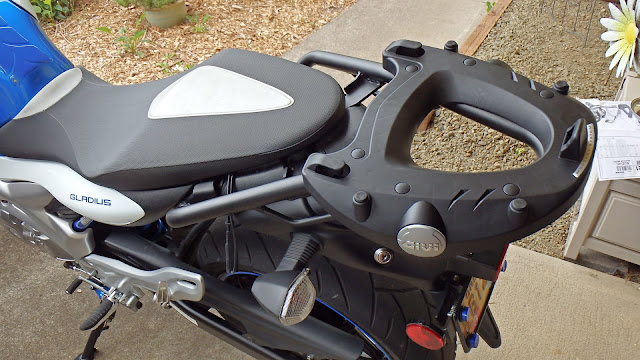 The case was easy enough to snap into place.  Here is the full view of it on Max parked in our driveway. 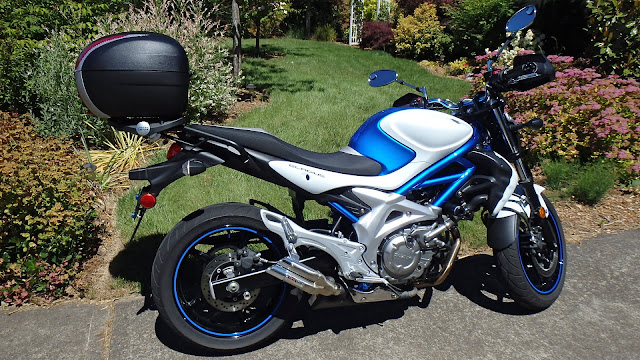 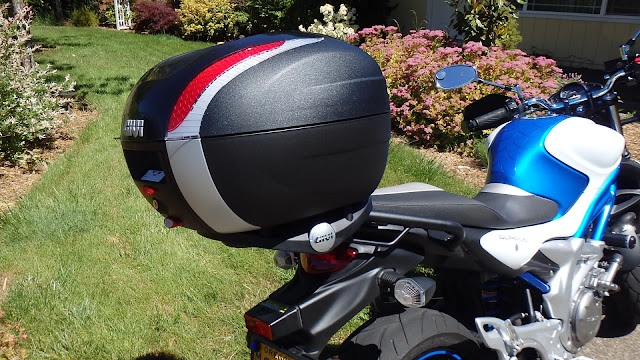 I rode with the top case the first time going to coffee Saturday morning and it didn't even feel as if it was back there.  Mind you it only contained a few snacks and some water.  It will come in handy for Monday June 17th and Ride to Work Day.  It will be nice to have the capacity to carry my lunch, purse, and sandals to the office and lock my helmet in it if I want to.

While at Saturday coffee Dom from Redleg's Rides joined us on his Ural, aka Valencia, and we were able to have a nice visit with him.  Our friend Gil rode his GPZ down from Portland and we recruited him to take a few pictures of the four moto-bloggers in attendance. 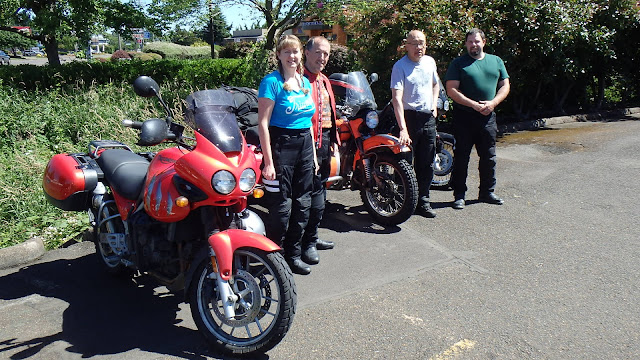 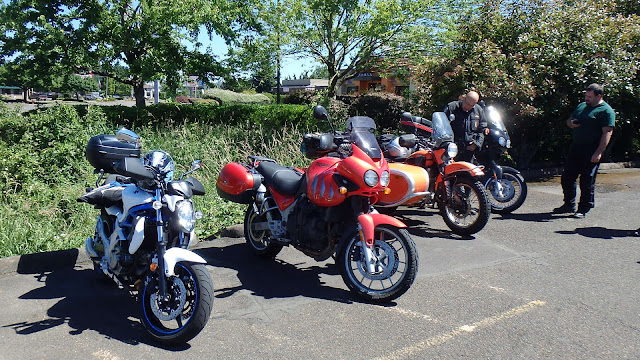 We are hoping to get out for a ride this Saturday after coffee but we'll see.  It is the height of allergy season and I haven't been doing too much outdoors except for sneezing and rubbing my eyes. Saturday is our only riding day of the coming weekend since Brad is teaching another Team Oregon class on Sunday.  A ride to the coast to escape the valley grass pollen may be in order.

"Cooperation is the thorough conviction that nobody can get there unless everybody gets there." - Virginia Burden
.
Posted by Trobairitz at 6:25 AM 42 comments: