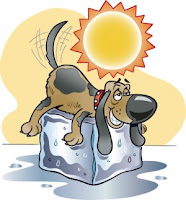 What are the dog days of summer you ask?  "The sultry part of summer supposed to occur during the period that Sirius the Dog Star rises at the same time as the sun; now often reckoned from July 3 to August 1.  A period marked by lethargy, inactivity, or indolence."

We haven't really been doing too awfully much lately in the way of motorcycle riding or mountain bike riding.  Since early June almost every weekend has been taken up.  Sometimes with visitors from out of state, Troubadour teaching Team Oregon classes, and/or visiting with family from out of town.  I think we had one weekend in June where we had no plans and every weekend in July was booked, but August looks a little more promising.  Our first weekend off together with no prior engagement on the calendar is in the middle of August.

While Troubadour has been busy teaching, going to the Black Dog Dual Sport Rally with PolarBear, and moto-camping with his work mates, I have been holding down the fort.  Yard work, housekeeping, grocery shopping, and picking 24 pounds (10.88 kg) of blueberries.  I work a half day on Fridays, so one Friday afternoon we went out raspberry picking as well, although we only picked 10 lbs of them.  The freezer is now stocked for another year.

While I haven't been on the motorcycle much, if at all, I have been riding my bicycle to work and back a few times on the days when I don't have errands to run after work.  It is only 3 miles each way but at least it is exercise.  And because I ride on a path that parallels the Oregon State University barns and pastures, I get to say good morning to the alpacas, llamas, sheep, and cows.

Since I have no moto-content in this post, I've included some photos we've taken over the last few months, but hadn't posted.


We used to have interesting wildlife out back as well.  A family of deer liked to hang out in the grass  just beyond the back fence.


The occasional bird of prey would stop by inside the yard too.


I say "used to" because they've torn down the forest behind our house.  We bought our house 10 years ago and have always enjoyed the forest out back.  For the last year or so we've known the owners had applied to build a 12-house subdivision, it didn't really hit home until coming home from work one day to find the trees had all been cut down and the machines had moved in.  It felt like FernGully.


While we don't have the critters resting near our yard, we do see deer occasionally as they walk through the construction zone.  There is still a large forested area on the other side of the busy road that they wander over to.  I sure hope people slow down for them as they cross.

*          *          *          *
We bought a new made in Oregon Stanton sofa sectional earlier this year and it took Basil a week or two before he would go near it.  I took the following picture when we finally caught him accepting it.  He was sleeping on it this morning when I left for work.  He has adopted it now just as he did the patio furniture.  It is his mission to get cat hair everywhere.

Poor Max - his legs weren't long enough to touch the ground (the seat wouldn't go low enough) so he put his legs up on the frame and Brad pushed him around.  He was quite happy with that. My brother has since taken the seat post off and zip tied the seat to the cross bar and it works fine for him.

That about sums up our summer so far.  While the weekends in June and July have been occupied, August and September should be a little better and we hope to get out on the road bikes and dual sports more.  Fingers crossed.

" Summer has set in with its usual severity." - Samuel Taylor Coleridge