Yesterday, after being sufficiently motivated by Sonja and Roland, Troubadour and I decided to go for a hike at McDowell Creek Falls and PolarBear accepted our invitation to join us.

This will be Troubadour's second hike at the falls and my third.  PolarBear lives closer to the falls and I believe has been there a few more times.

The last time Troubadour and I hiked there was in 2013 and the water level was really low.  This year we are nearly 10 inches ahead in rain so we wanted to see just how much water was flowing over the waterfalls.  We weren't disappointed.

PolarBear and Troubadour were both taking pictures with their smart phones.  I am still using a dumb phone, so I had my trusty point and shoot Canon camera along for photo opportunities.

We didn't take the direct route to the falls but took the longer hike through the forest, just shy of 3 miles total.

He also made it back down the goat trail. No Troubadour's were harmed in the photographing of this waterfall.

It was just a quick walk from the falls to the car, so this was my last picture of the day.

It was nice to get out and go for a hike.  It has been so rainy we didn't do much all winter and now that Spring has arrived we need to get moving.

One Foot or Two? 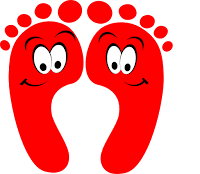 An odd post title when thinking of motorcycling, but bear with me.

A few weeks ago I was reading a Cycle World magazine article regarding the new or updated models of certain brands of motorcycles.  What caught my attention was the fact that at least two of them (one was the KTM 1290 SuperDuke R) came with a hill assist or "hill-hold control" to prevent the bike from rolling backward for a second or two on a hill.

Our Fiat 500 has a standard transmission and came with hill assist.  As someone who learned to drive a stick in the 80's it was a strange concept to me.  However, I quickly got used to it and wondered why we didn't see the same feature on motorcycles.  Here we are 15 months after purchasing the Fiat and this feature is starting show up on high-end bikes and maybe has been around for a bit, I'd just never heard of it.

As my thought process progressed to putting  bikes in motion on a hill, it made me realize how much practice I probably need doing that very thing.

This is only ever an issue when stopping on a hill.   9 out of 10 times I will still put both feet down when stopped, then lift the right foot back up and onto the rear brake.

Team Oregon now encourages students to come to a complete stop and just put the left foot down leaving the right foot on the rear brake. (While they don't specifically teach it, it is encouraged)  While this may be a good habit in some instances I just can't seem to bring myself to practice it.  I worry that one time when I stop on an off-camber corner muscle memory will take over and I'll automatically put the left foot only down when that is actually the low side of the road and over I'll go.

With the habit of putting both feet down, I feel like I have the option to put either down if necessary since I am not used to just the left.  Does this make any sense?

So, do you have a preference?  Do you stop with one foot on the ground or two when out and about on two wheels?

" Be sure to put your feet in the right place, then stand firm." - Abraham Lincoln
.
Posted by Trobairitz at 3:44 PM 55 comments: