This blog challenge comes courtesy of a little poll from Gary over at Flies in Your Teeth.  Find his original post at this ----> LINK.

"Just for fun, I am putting together a list of the top essential items riders take with them.  What are the five things you CANNOT leave behind?

Please give one answer for each category below and I will collate the answers into an essential motorcycling items guide......

1. For your bike.  It could be a particular tool, cable ties, oil, or a puncture repair kit.  What won't you travel without?

2. Something you wear when riding.  A favourite pair of gloves perhaps, a heated jacket, a certain pair of boots, or kevlar jeans maybe?

3.  Technical stuff.  Maybe you won't go without a camera, music, a GPS or a laptop.  What item MUST you take?  Don't list a phone, as we all carry those!

4. Essential item to carry with you.  That could be water, sunscreen, paper maps or something else?


Here are my answers:

1.  For my bike - Givi tail bag - I need some space besides my pockets to carry extra gloves, tinted visor's, etc.

2.  Something I wear when riding - My Rev'it Sand riding pants.  Most comfortable riding pants I've owned and they are long enough, woot!

3.  Technical stuff - Canon Camera - I am not very technical so the only techno gadget I carry is my trusty point and shoot Canon camera.

4.  Essential Item to carry with me -  Earplugs - every once in a while I forget to put them in for short jaunts, but they are essential and I always have them with me when riding.

5.  A luxury item - Lipstick - Don't laugh....okay, go ahead and laugh, but I always have pink lipstick in my jacket pocket when riding.  Hey, something has to help distract from helmet hair.

There you have it.

I hope everyone takes a few minutes to help Gary out with his poll.

So, what can you not ride without?

"Simplicity is making the journey of this life with just baggage enough." - Charles Warner
.
Posted by Trobairitz at 1:58 PM 11 comments:

Will Travel for Motorcycles - The Sequel

**  I had every intention of posting this report a week ago. Unfortunately due to my work schedule and computer issues at home, that didn't happen.........

*   *   *   *
In January of 2014 we travelled to Abbotsford, British Columbia to attend the Vancouver Motorcycle Show.  We made a weekend of it and travelled with PolarBear (Andy) and his wife SweetPea (Karen). You can read about the trip at this LINK.

Last September we hatched a scheme to attend again this year. Rooms were booked at the Best Western Plus Regency Inn and Conference Centre and then we waited.

Last Friday on January 22, 2016 we set the alarm for 4 am to get ready.  We drove across the valley to PolarBear's and piled in his rig.

It was an uneventful ride north on I-5 with intermittent rain.  We stopped for coffee and snacks along the way. We crossed the border at Sumas.

We arrived in Abbotsford early afternoon and ran a few errands before checking into the hotel.  For some reason we were given the exact same room we had last time.  Room 312. A very nice suite with a mini kitchen.  They have redecorated since 2014, so the room is even nicer than it was. This Best Western is one of the cleanest hotels we've ever been to.

For dinner Friday night we decided on Boston Pizza.  They have a lot of choices and we could have a drink or two as well.

After eating entirely too much, we retired back to the hotel with plans to meet the next morning.

Saturday morning we met PolarBear and SweetPea in the lobby and headed out to the show after a brief detour to an ATM machine.  We arrived a smidge later than last time so there wasn't any line-up, although there seemed to be a lot more people in attendance.

I didn't seem take as many pictures as I typically do, but the camera did come out a few times. The overhead lighting was not my friend, so the quality of pics isn't great, but I'll share them anyway.

After wandering around looking for a few hours we were hungry for lunch. Luckily they had food trucks set up outside so people had an option besides the burgers a fries from the Tradex food court.

We decided on a veggie wrap from the Bobbies Indian food truck.  Yummy!

Our phones weren't working well in Canada but SweetPea's was so she suggested sending Princess ScooterPie a text message to see if we could connect.  As we were wrapping up lunch Dar was at the food court with her Farkle Garage posse having lunch.  We met her there and we able to talk for a few minute and exchange hugs.  No one thought to get out the camera.  No pics.....did it really happen?

We left her to finish her lunch and went back to wandering.  We still had half the show to peruse.

Soon after lunch I came to my favorite bike of the show.  It was like seeing a flying car.  I'd heard about them, but didn't know they actually existed yet.  Behold the Ducati Scrambler Sixty2 in Ocean Grey color.

We spent quite a bit of time at the Ducati booth.  Both the Scrambler Sixty2 and the regular Scrambler caught our eye.  We have a friend who bought a Ducati Scrambler Urban Enduro last fall and loves it so much he is selling both his Triumph Tigers.  Hmmmm. 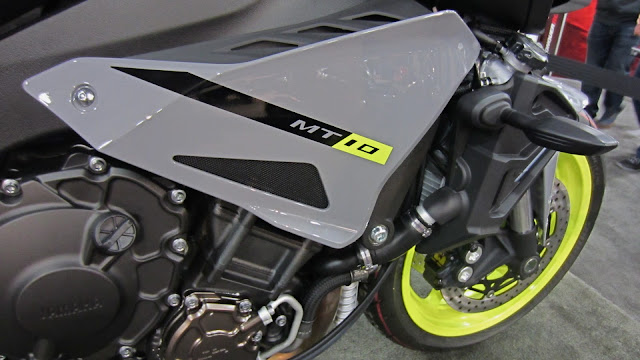 Another bike we were surprised to see was the prototype of the all new Suzuki SV650. I knew they were coming out with them, but had no idea we'd actually get to see one in person.  Upon sitting on it, I found the gas tank was a little narrower than on my Gladius and the seat was also a smidge lower. Me thinks it will be a bigger seller than the SFV 650 Gladius.

As soon as Troubadour tried on the helmet seen below, PolarBear proceeded to inform him he "looked like he had a bucket on his head." It did make him seem a little like a bobble-head.

The Honda booth was prominent when one entered the show.  The Africa Twin display was front and center (centre).  When we arrived that morning there were too many people oohing and ahhing that we couldn't get near it.  Not so on the way out.


We left the show at 5 pm after walking around for 7 hours.  We were all beat and looking forward to dinner out.

We decided on Mr. India as recommended by the front desk staff of the hotel.  It was a fabulous little hole in the wall with wonderful food.

From there we all retired to our respective hotel rooms until Sunday morning with plans to meet and head home.

We met Sunday morning and after a quick stop at Tim Hortons made a run for the border. We finally arrived home just after 6 Sunday night.

It was an awesome weekend spent hanging out with great friends and checking out cool motorcycles.  The show may not be something to do every year, but we sure enjoy the every other year road trip.


Thank you for driving Andy!!

" Travel, in the younger sort, is apart of education; in the elder, a part of experience." - Francis Bacon
.
Posted by Trobairitz at 2:58 PM 37 comments: