Pedal to the Petals.

The weather last weekend was slightly iffy.  The forecast predicted periods of rain, light showers, and even sunshine. Saturday we opted to do yard work.  We managed to weed and edge a few of the shrub beds in the back yard then went on a 5 mile (8 km) walk.

Sunday the weather was supposed to be a little worse.  Saturday night the forecast said rain was to start at 10 am.  By 10 am the rain hadn't appeared so we checked the forecast once more.  It was 55˚F ( 12˚C) and no rain predicted until noon.  Sufficiently inspired by Sonja and Roland's bicycle ride in single digit weather with ominous skies, we opted for a bicycle ride.  I decided on my Treks Hybrid because the seat is more comfy than my mountain bike and Troubadour chose his Electra Relic beach cruiser with the coaster brakes, how brave.

We rode east along Campus Way, a paved multi-use path, that heads east towards the OSU Campus.  And it just happens to have a covered bridge along the way.


We stopped for a picture or two and continued on our way. Soon we arrive on the Oregon State University Campus.  This was the first weekend of Spring Break and so there were not a lot of students or faculty wandering about.  Perfect time to explore a little. See a campus map HERE.

Troubadour was in the lead and we found ourselves drawn to the magnolia trees in the Memorial Union Quad.  We couldn't resist the lure of the trees in full bloom.  Even the sun came out to play.

Across the Quad I spotted a peace sign woven out of what appeared to be willow branches.  I had to take a closer look.


Just beyond the peace sign was another large magnolia.  The brick building made a nice backdrop as did all the spent blossoms on the ground.


Back on the bikes and we meandered a little further.  I stopped to check out a Rhodie that was blooming.

Troubadour spotted a clock tower so we stopped for a picture.  At this point the skies had clouded over and it was starting to spit a rain drop or two.


I did a little tweaking with an app on my iPad and made one of Hubby's pics look a little bit more "old timey" to go with his bicycle. This was the result. 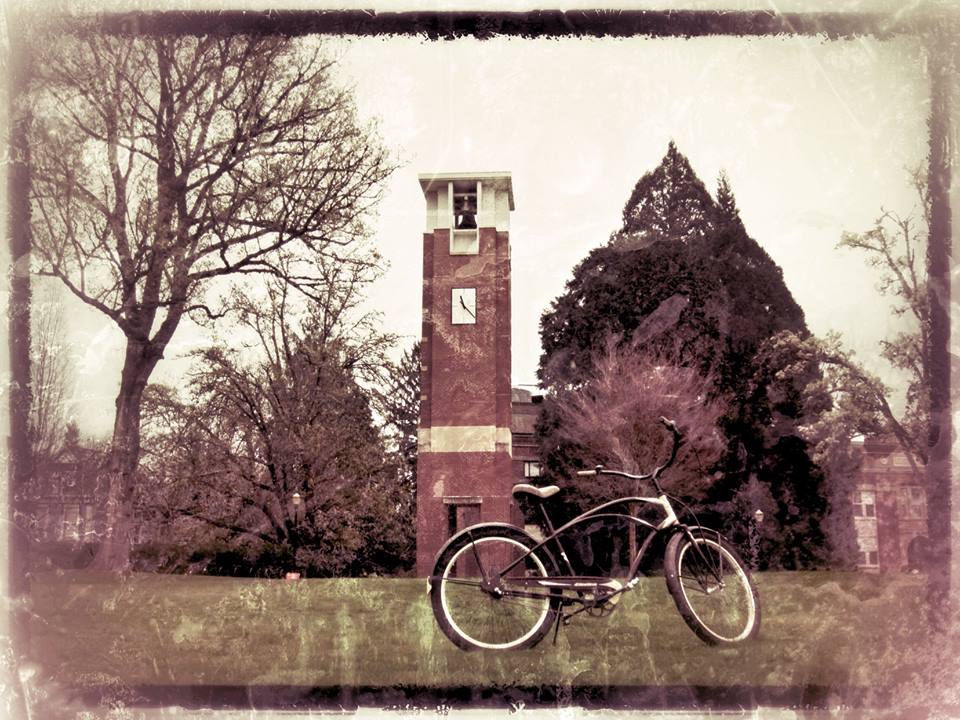 Instead of turning around at this point we carried on east towards town for a few more pictures of the walking path.  This oak tree lined path is a favorite spot of mine. 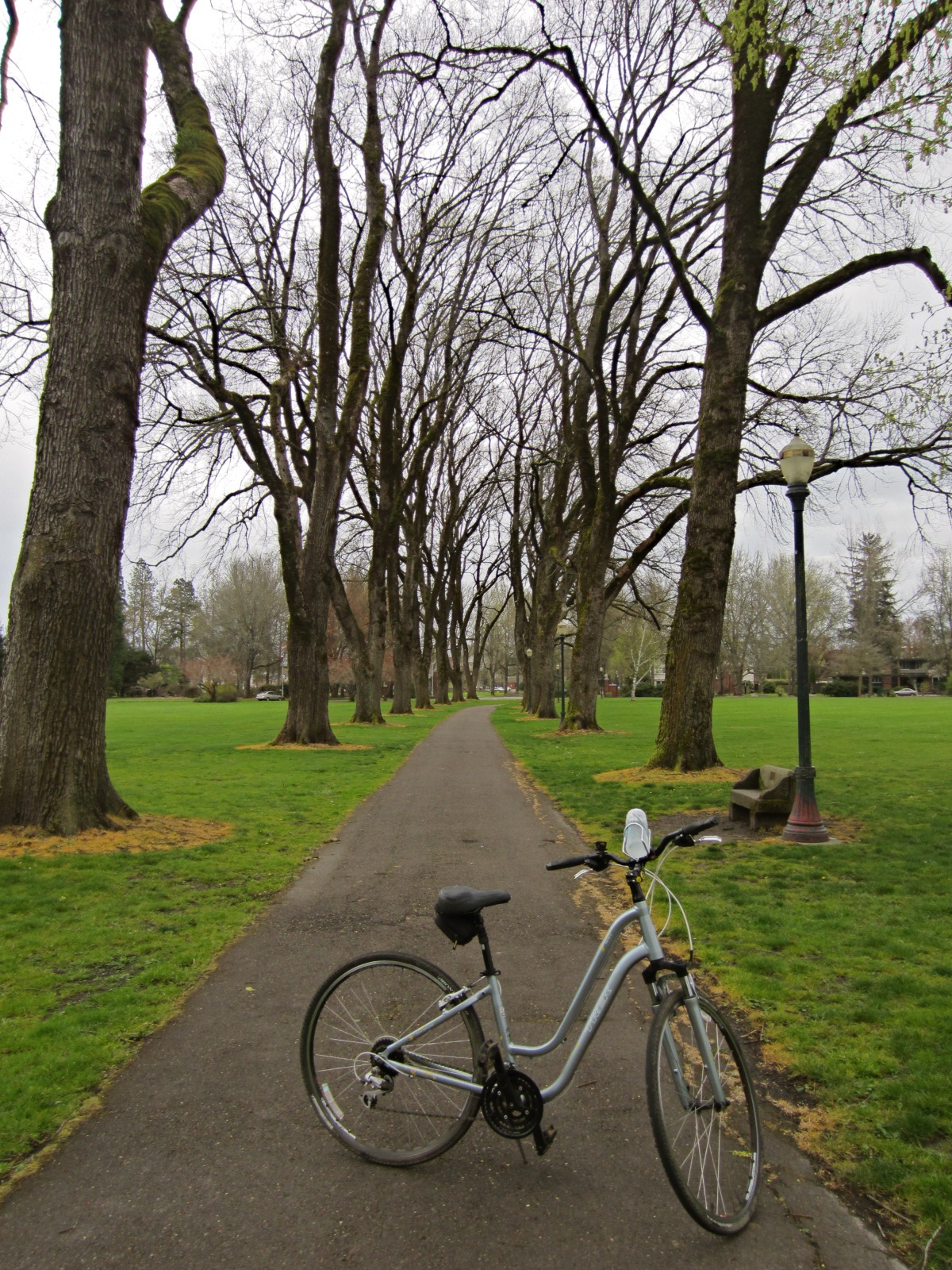 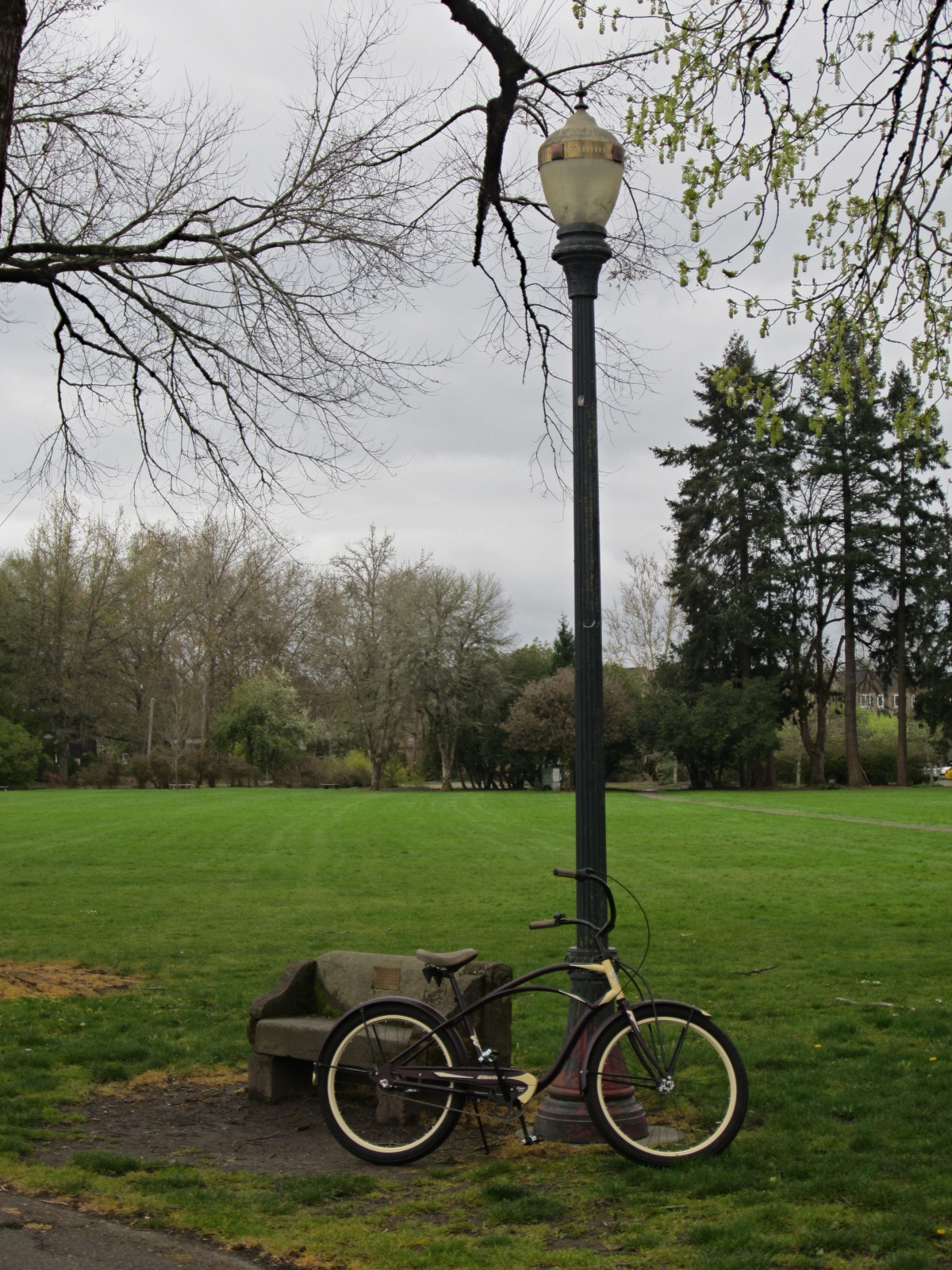 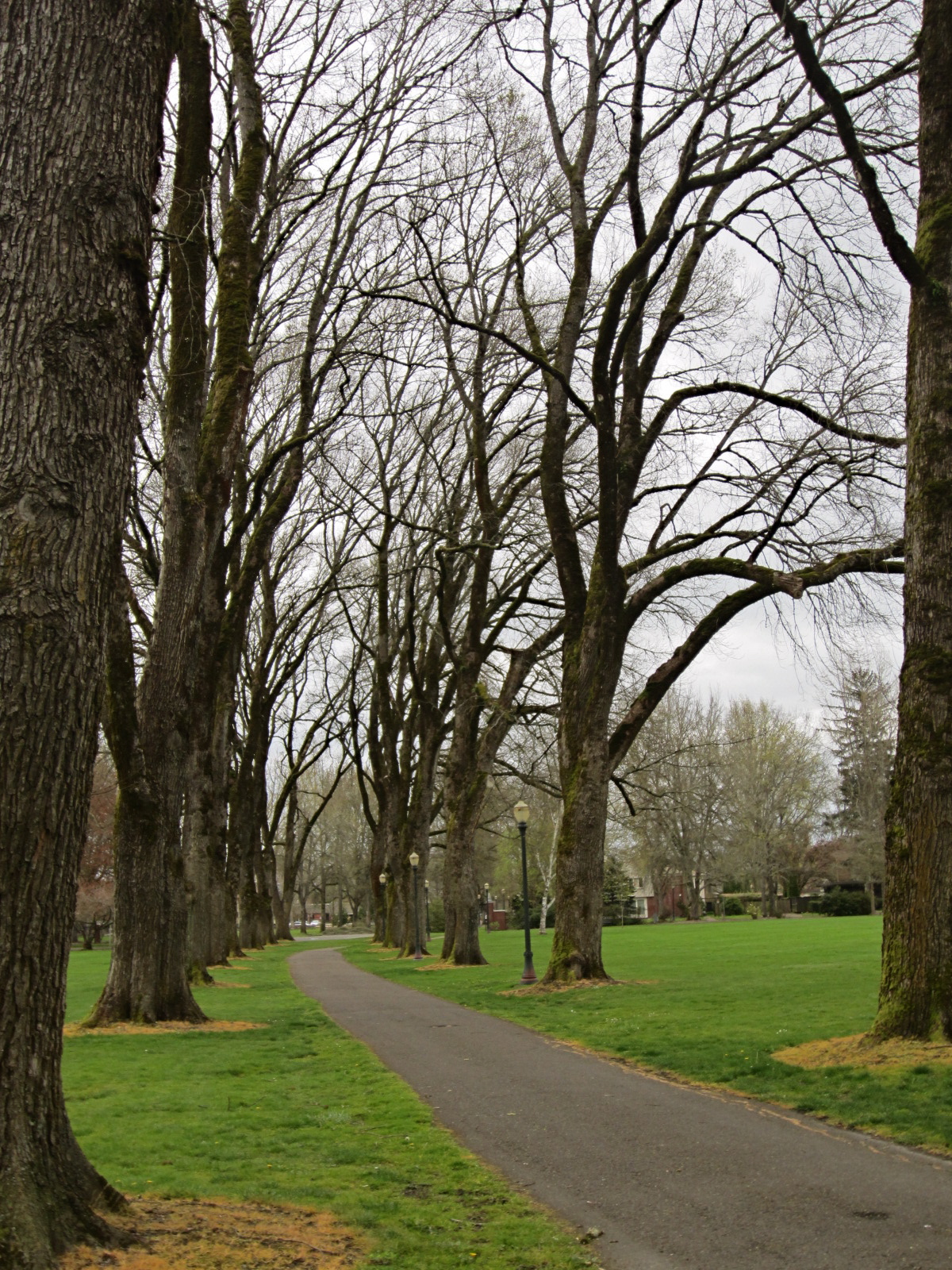 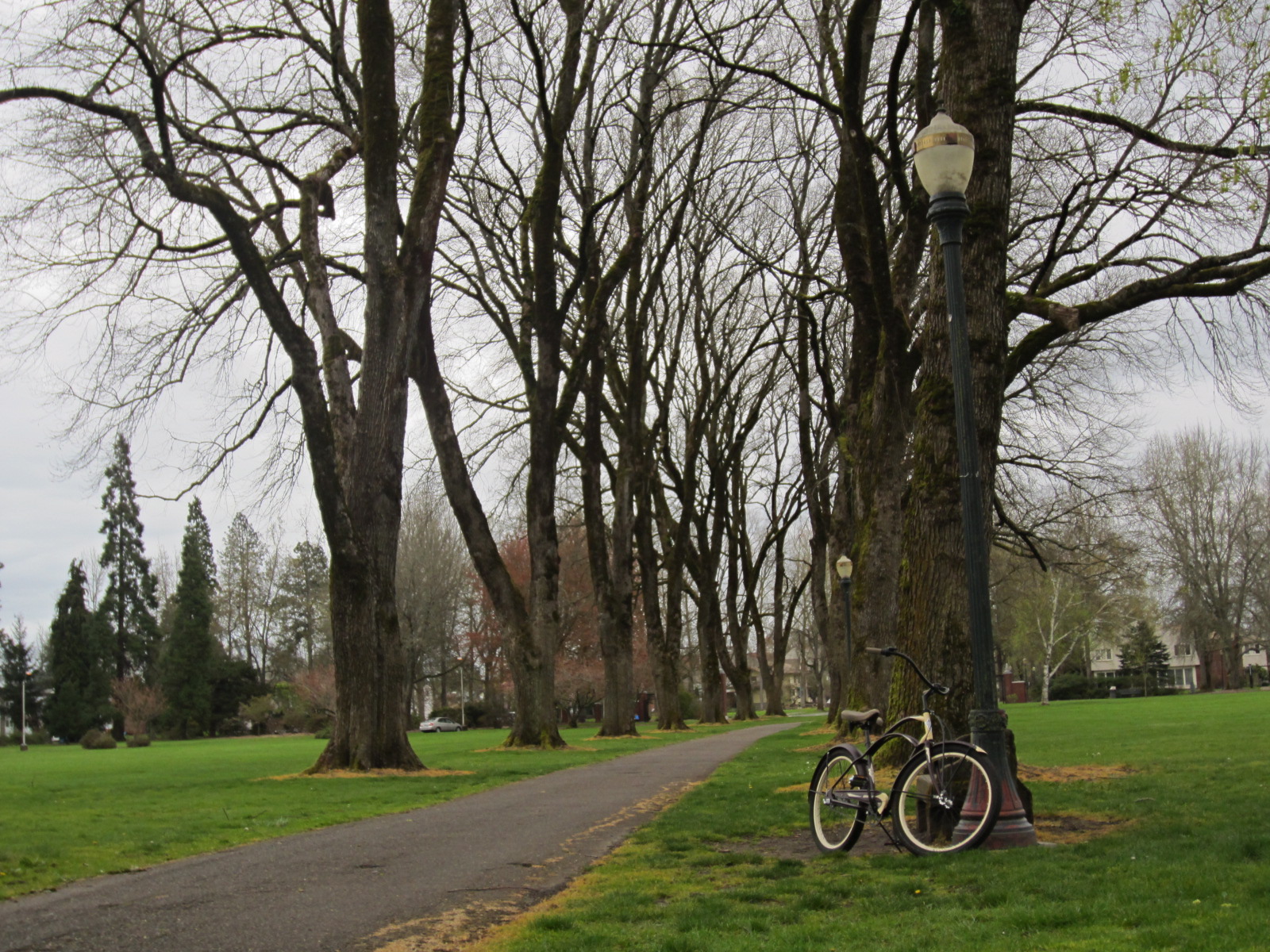 Unfortunately this is where my camera battery died.  We didn't bring the other camera or either of our cell phones.  Oh well.  We were just a few blocks from my office so we rode down to use the loo. (One too many cups of tea before the ride)

While at the office we debated whether to ride home or leave the bikes at the office and go have a chai latte and wander around downtown a bit.  I peeked out the blinds and it was raining - heavily.  I looked at the clock and it was 11:50 am.  Damn, the rain was right on time.

Well, that escalated quickly.  More debating ensued.  Do we wait out the rain or just pedal for home? We said "screw it, we aren't going to melt" and I can make us chai lattes at home. The rain didn't look like it was going to let up.

Out into the rain and only 3 miles (4.82 km) to home.  At one point I was wishing I'd had a pair of gloves with me.  My hands were cold and dripping wet and getting colder in the wind.  Luckily we both were wearing Columbia water resistant jackets and also water resistant pants.  In Oregon you have to dress for undecided weather. Neither of us wore a helmet since we knew we wouldn't be mingling with traffic.  Brad was smart enough to wear a hat.  Me? Not so much.

Our faces and hands were soaked, but for the most part we weren't cold, just our hands.  And we were smiling and laughing the whole time.  We did stop under the covered bridge a bit for me to warm my hands.  By the time we came out the other side of the bridge it had lightened up considerably and by the time we got home it had stopped.

Sure - if we had of waited downtown it would have stopped and we would have kept riding.  Oh well.

And no, it never rained again for the rest of the day while we sat inside, drank chai lattes, and watched a movie. Theory of Everything. It was a good movie and I recommend if you haven't seen it.

Troubadour is teaching Team Oregon this weekend so there won't be much else going on.  Maybe next weekend.

" My two favorite things in life and libraries and bicycles. The both move people forward without wasting anything.  The perfect day: riding a bicycle to the library." - Peter Golkin
.
Posted by Trobairitz at 7:37 AM 25 comments:

Last Friday I managed to score the day off.  It helps when your boss wants the day off as bad as you do.  We were really hoping for a dry day to go for a ride prior to the rains returning on the weekend.

While we didn't have beautiful blue sky and sunshine like the previous weekend, it was dry and a balmy 60˚F (15.55˚C) when Troubadour and I rolled out of the driveway at 1 pm.  We were headed east across the valley where we still needed to find two covered bridges in the Sweet Home/Cascadia area.

My Gladius needed petrol so the first stop was downtown for fuel.  From there we headed over the bridge and out Highway 34 to Peoria Rd.  We meandered our way south and east across the valley taking back roads.  Some I remember, a lot I don't since hubby was in the lead.

We found our way over to Highway 228 (aka Halsey/Sweet Home Highway) and through the little hamlet of Brownsville.  A good portion of the movie Stand By Me was filmed in Brownsville 30 years ago.

Further East on 228 and just before the town of Holley, Troubadour decided to explore where Upper Calapooia Drive went.  I followed and it was a beautiful two lane country road along the Calapooia River.  After about 6.5 miles we were stopped where it turned to gravel and there was a Weyerhaeuser Forestry Gate. Apparently we'd come upon the Weyerhaeuser Calapooya Tree Farm.  Since I was on Max we decided to turn around there.  Neither of us wanted a trespassing charge either.

A good spot for a break.  We stopped in a gravel area and had a snack and drink of water.  Wandered and took a few pictures. 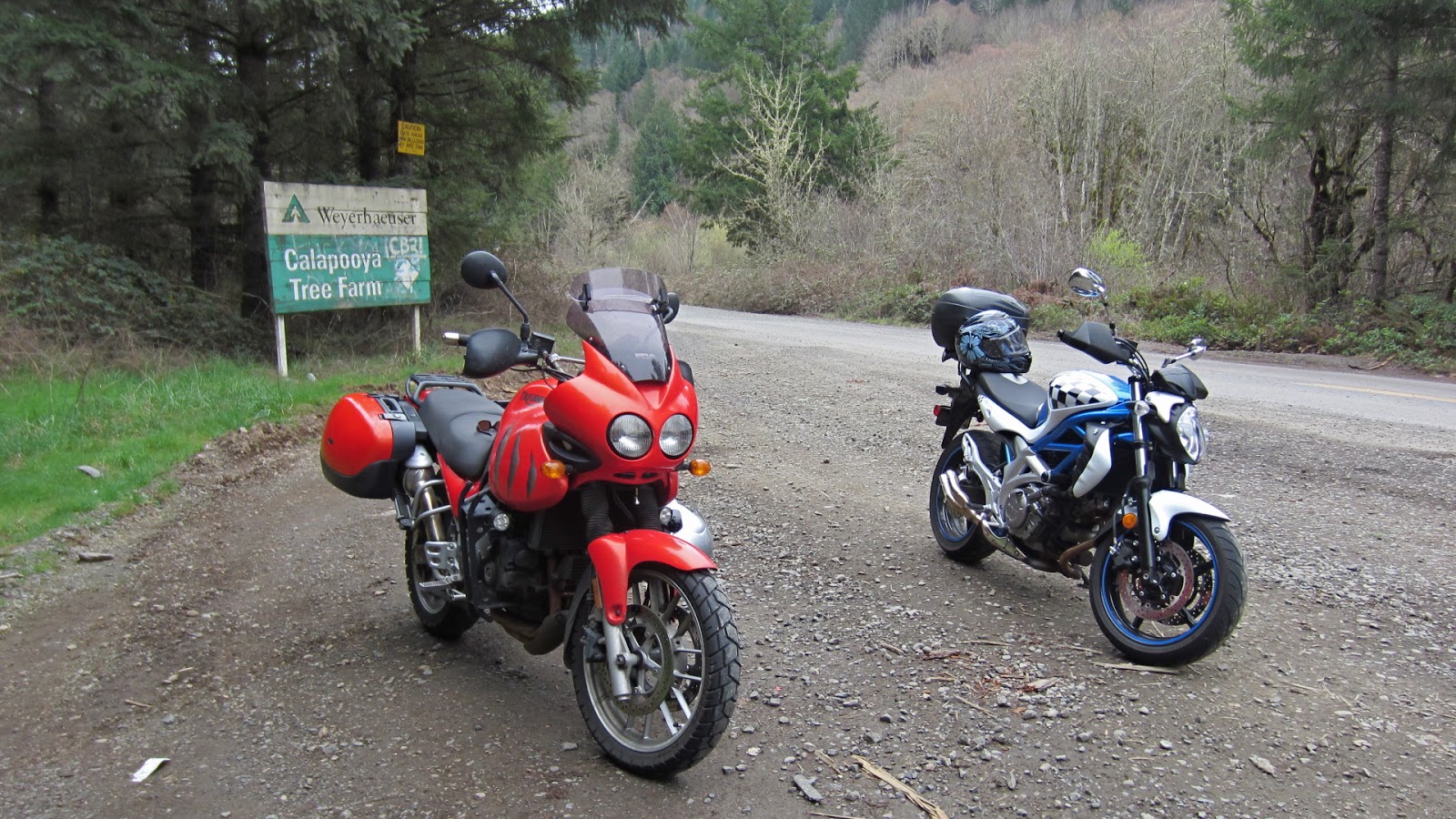 As we were getting ready to leave I went to put my helmet on and noticed a moth resting on the top. He was pretty cool looking. 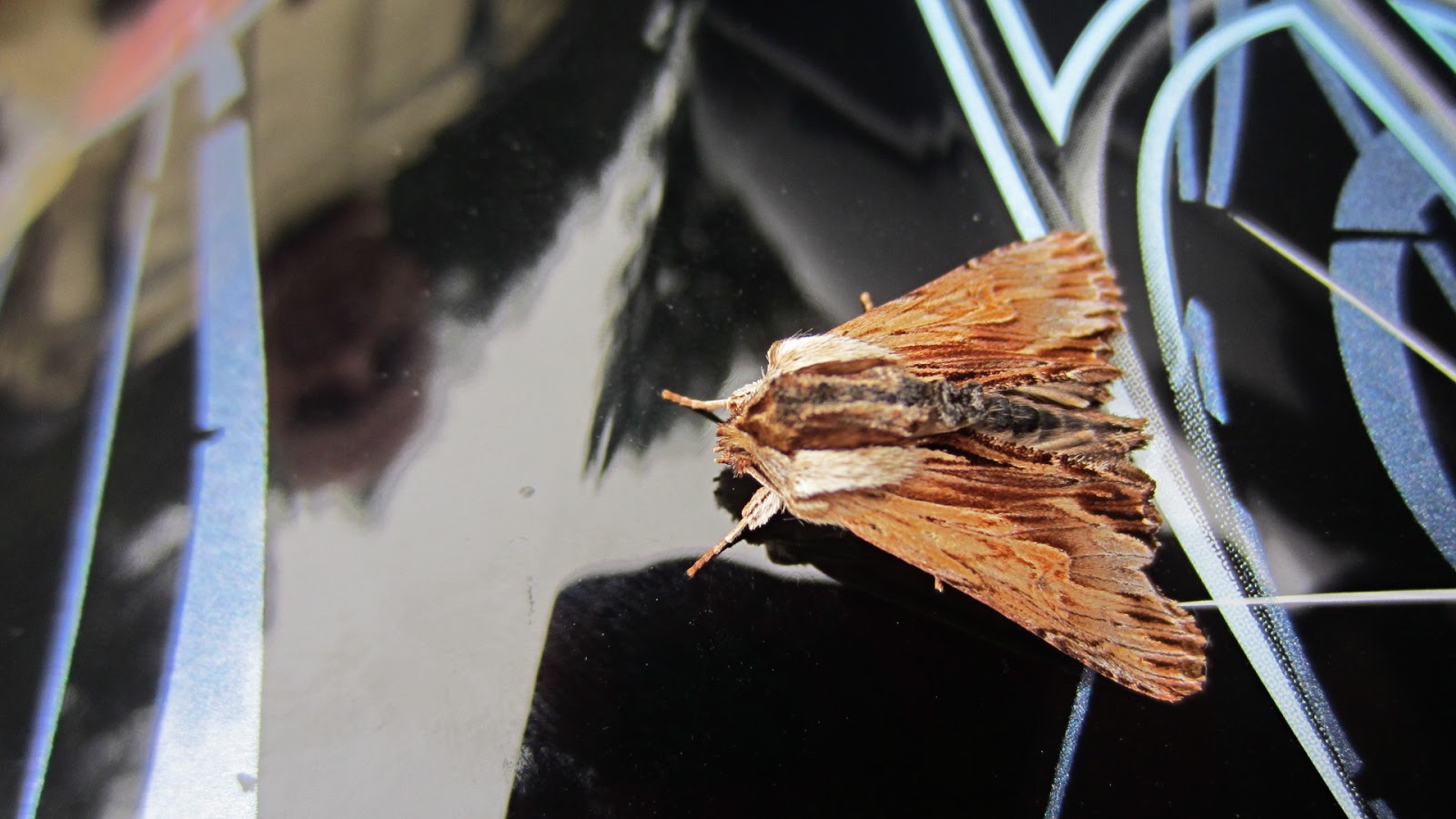 Troubadour remarked how it looked like a piece of tree bark and picked up a piece for comparison.  If the moth was on the trunk of a tree it would be completely camouflaged. 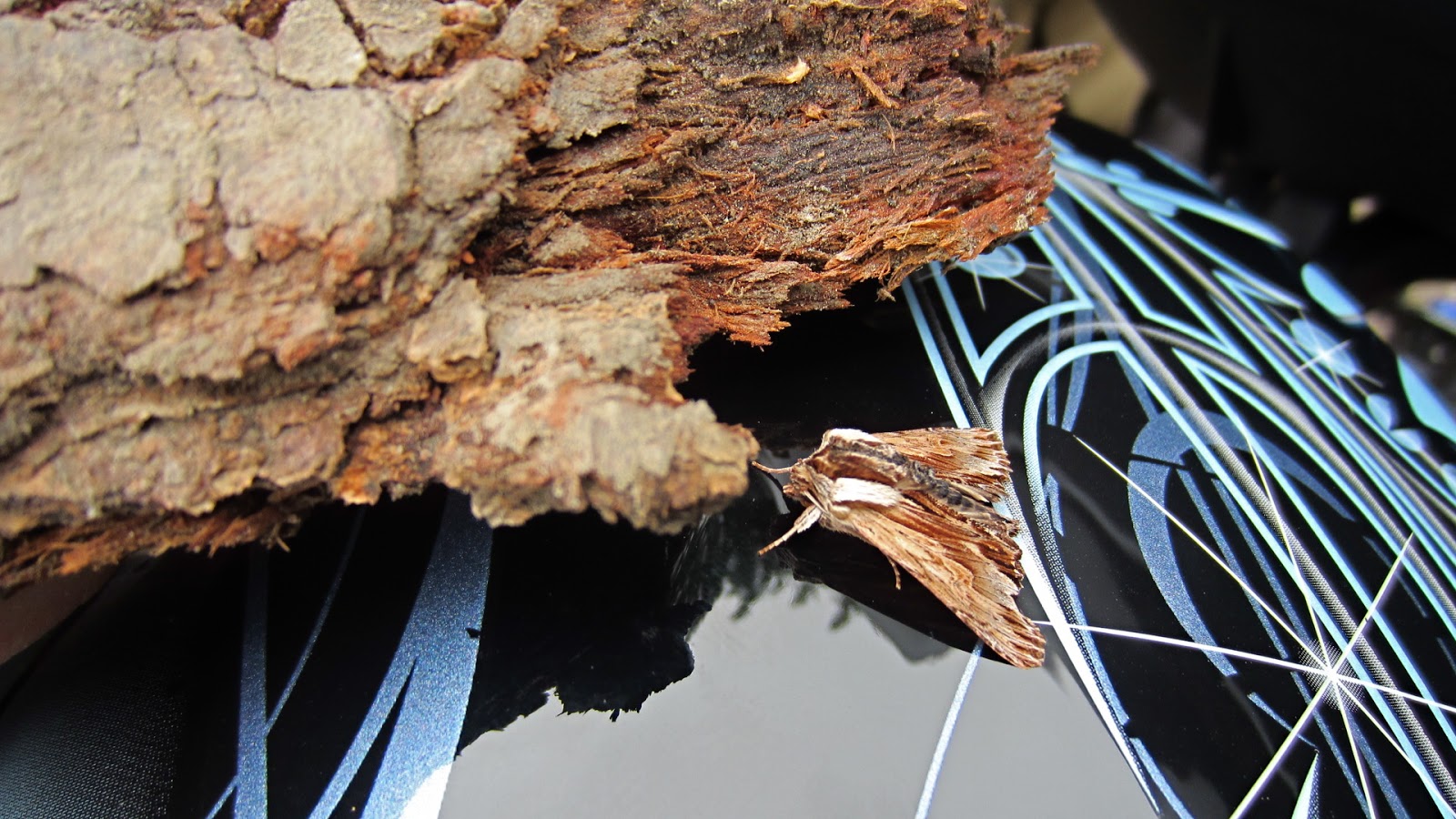 I put my helmet on and it was still there when I got on the bike. Hold on little moth. 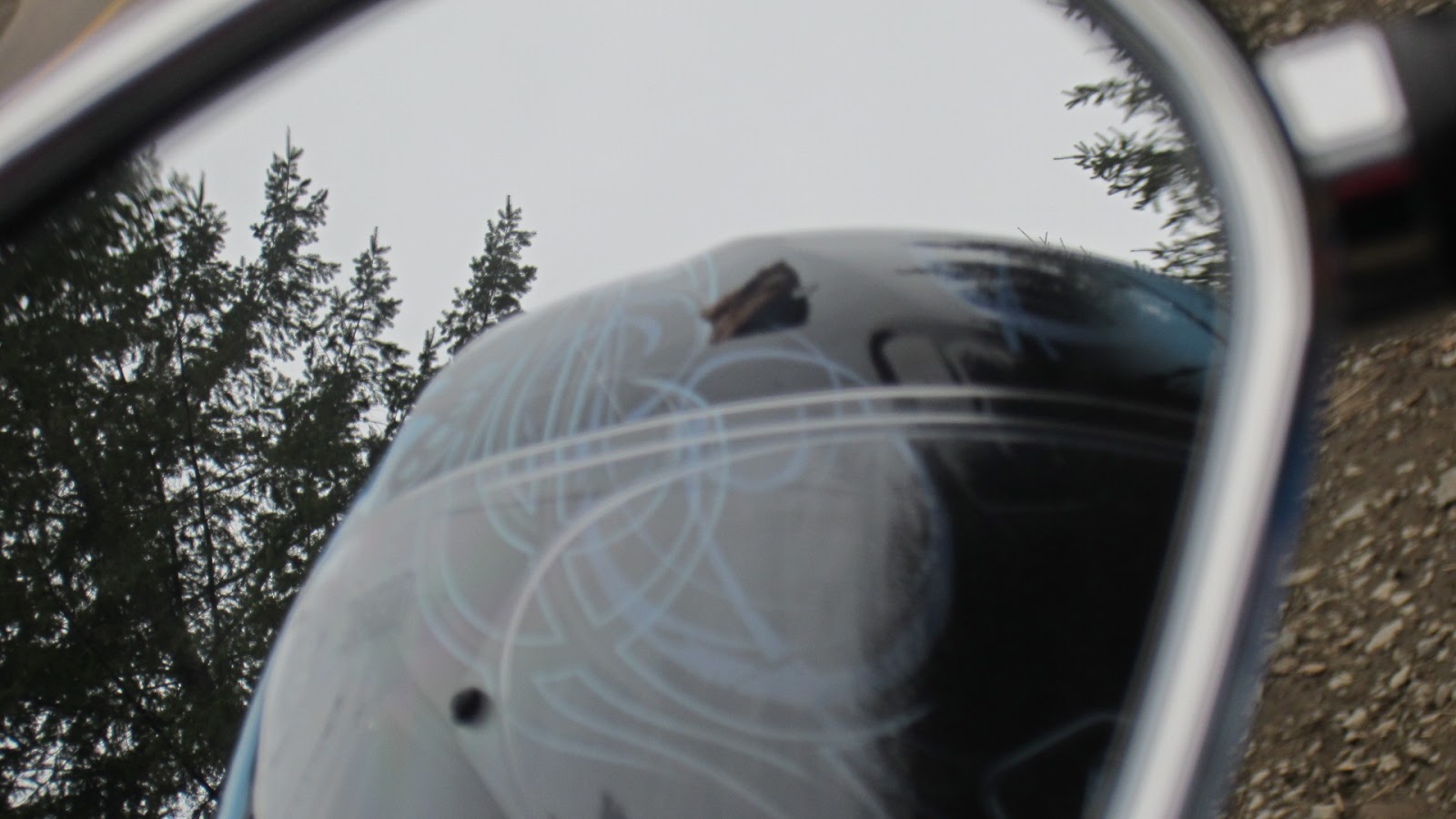 We rode back up to Highway 228 and once more headed east towards Sweet Home.  There in Sankey Park we would find the first covered bridge of the day.  The Weddle Covered Bridge.


The Weddle Covered Bridge was built in 1937 and spans Ames Creek.  It is 120 ft (37 m) long.  We would have wandered through it if a handful of teenage skateboarders hadn't made it their playground.  We did manage to keep them out of the pictures though.  For more info on the bridge click this LINK. 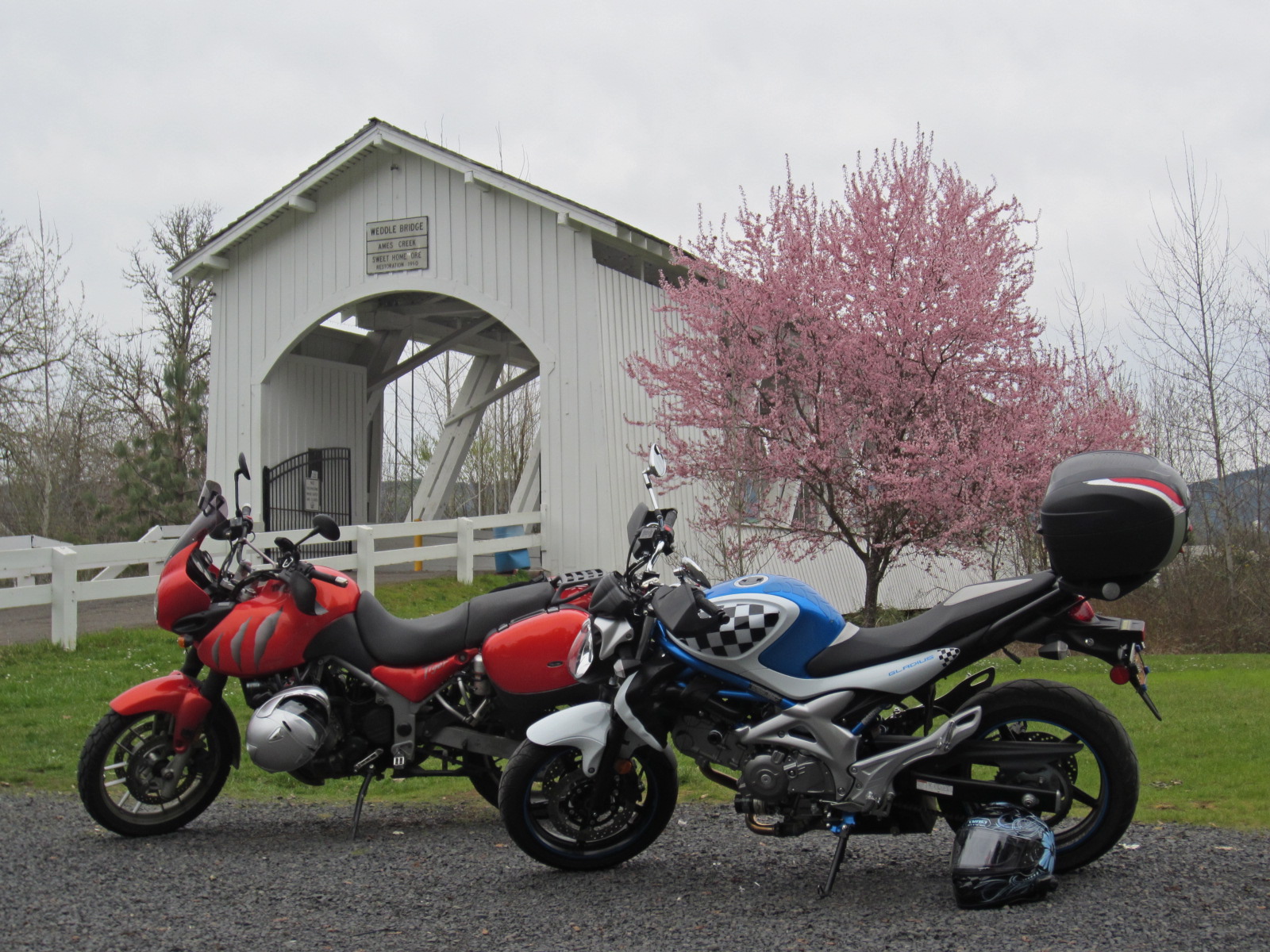 Before we left I too managed to get up close to the beautiful flowering plum tree.


Back on the bikes and further east on Highway 20 towards Cascadia.  Fun fact - Cascadia was originally a stage stop on the Santiam Wagon Road.  A brisk 12 mile ride on the highway and we arrived at Short Covered Bridge.


The Short Covered Bridge spans the South Santiam River and was built in 1945 and is 105 ft (32 m) long. For a bit more information on the bridge click this LINK. When walking on the bridge I noticed how low the water level is.  Not enough snow pack in the mountains this year means not a lot of run off. 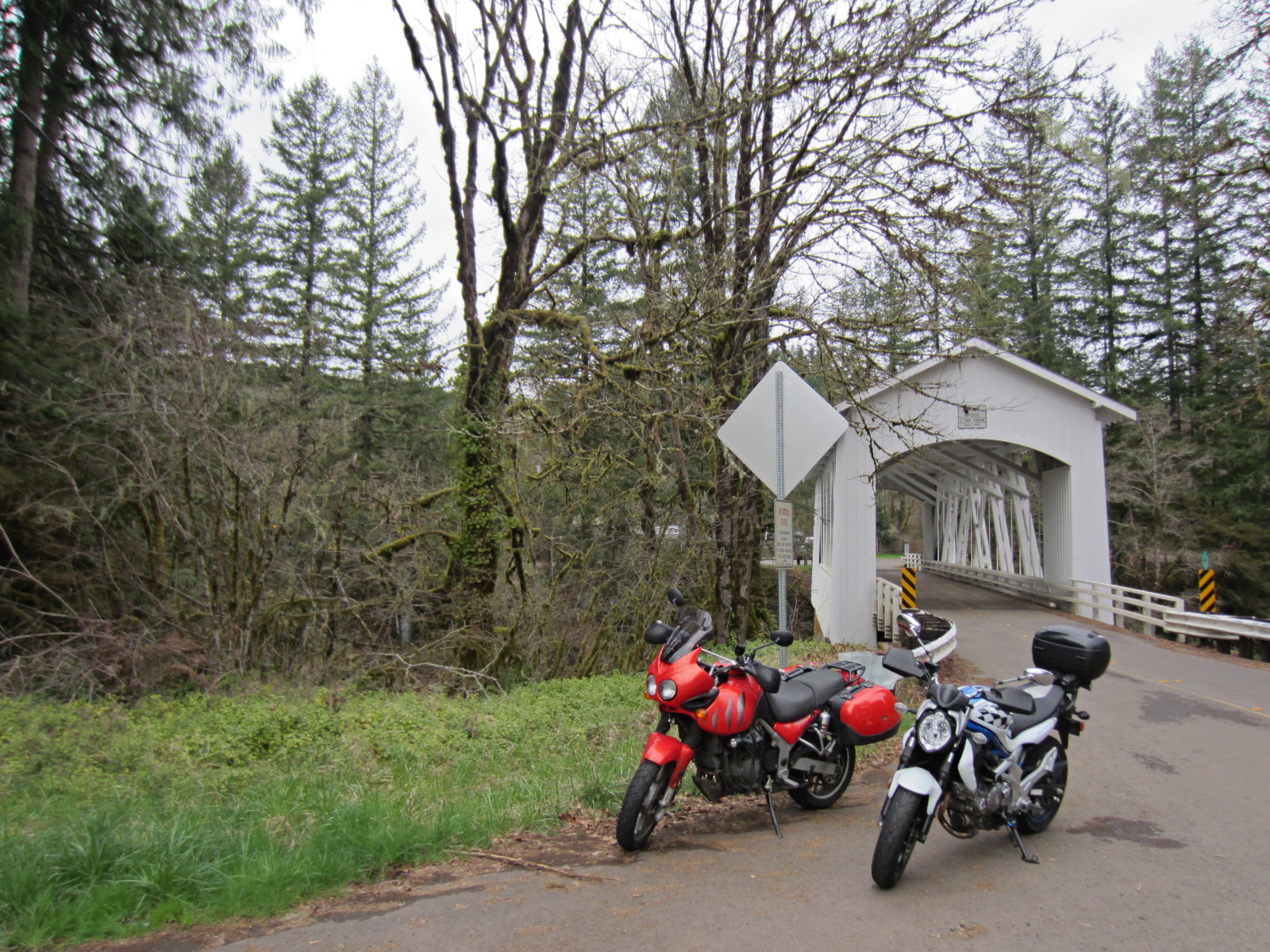 And if you wander into the shrubbery enough you can get around the ugly "stop sign ahead" sign. 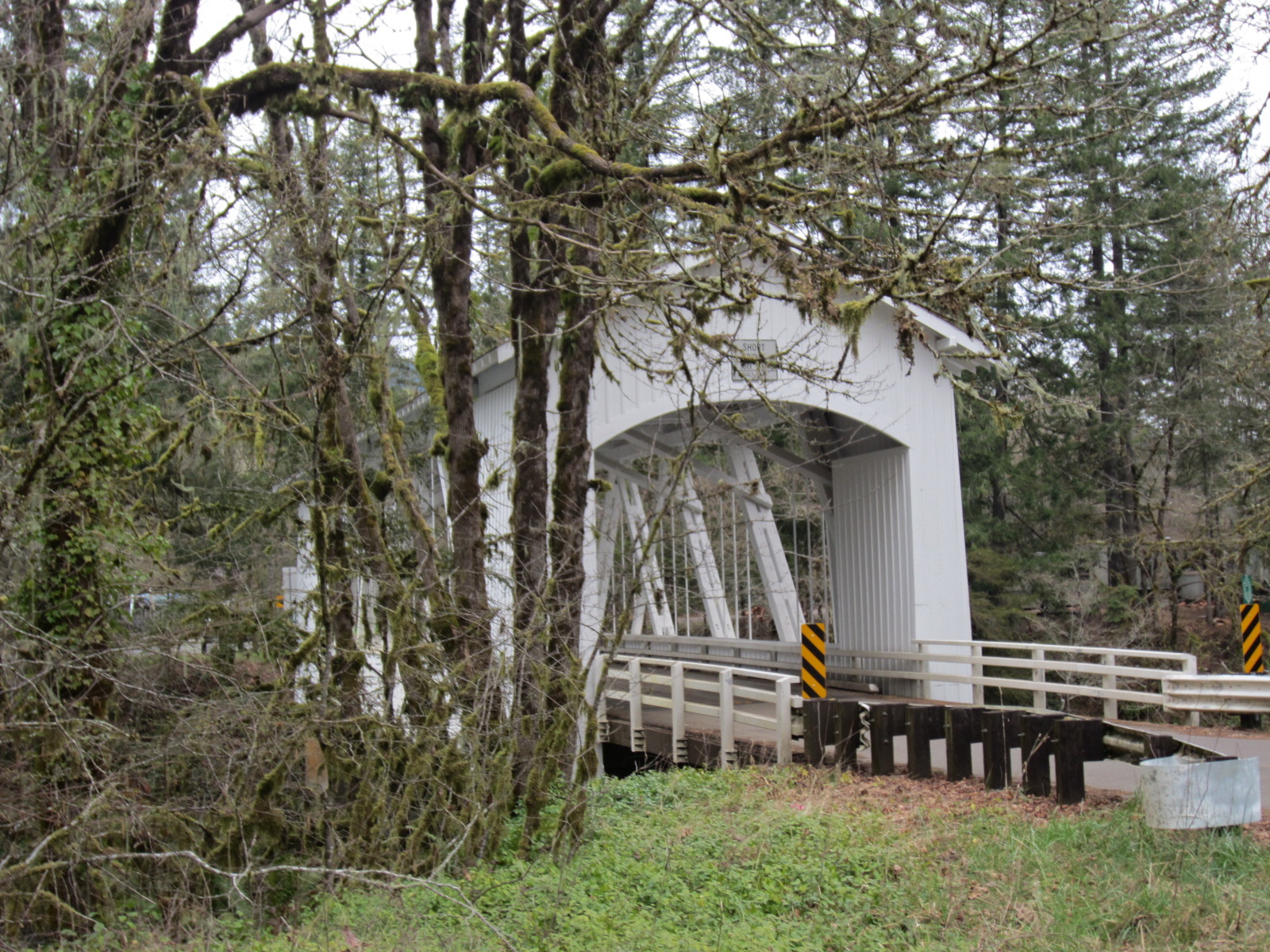 From the bridge we saddled up and raced for home.  Traffic was heavier as we were into the commuting time late in the afternoon.  It wasn't until about half way home that we saw our first motorcycle of the day.  I think we only saw 3 total and all appeared to be commuting home.

We arrived home close to 5:30 pm having put 140 miles (225 km) on the odometer. I noticed after we arrived home that Max hit a milestone.  He finally made it to 10,000 miles (16,093 km). Considering it has been four years this month since purchase, that seems pretty darn sad.  But we made it nonetheless. He now sits waiting patiently for the next ride with 10,004 miles on the clock.

" Bridges become frames for looking at the world around us." - Bruce Jackson
.
Posted by Trobairitz at 6:55 AM 32 comments:

Alas, the riding gods gave us the middle finger and there would be no riding for us.  My sister-in-law was attending a veterinary conference here in Corvallis so she, my brother, and little Max (one year old this month) stayed with us for three nights.

While we didn't get to do any riding we did find a pretty cool scooter toy at the park on Saturday.

Since my brother worked for Harley for over 20 years, I am pretty sure riding is in Max's future.

I hope everyone else is getting out and enjoying a ride on two wheels.  90% chance of rain for us Saturday, but tomorrow looks promising for a ride if I don't have to work.

"Rejoice with your family in the beautiful land of life!" - Albert Einstein
.
Posted by Trobairitz at 6:08 AM 28 comments: