Time to dust off the bike, my gear, and also dust off the cobwebs of my mind.  You know, the ones that accumulate over the winter months and cloud the mental acuity needed for riding.

Troubadour and I rode to Saturday coffee then headed out meandering across the valley in a southeastern pattern.  Some back roads I'd been on before, some I'd never been on.

We found ourselves at Thompson's Flour Mill on Boston Mill Road. (Thompson's Mill was formerly known as Boston Mill).  The mill is the same one in my header pic that was taken 3 years ago.  It is an Oregon State Park Heritage Site, built in 1858, and is the oldest water driven mill in the state.  It burned down in 1862 and was rebuilt within a year.  It continued to grind grain until 2002.

The Mill was actually open so we stopped by and looked around and even took a free guided tour. 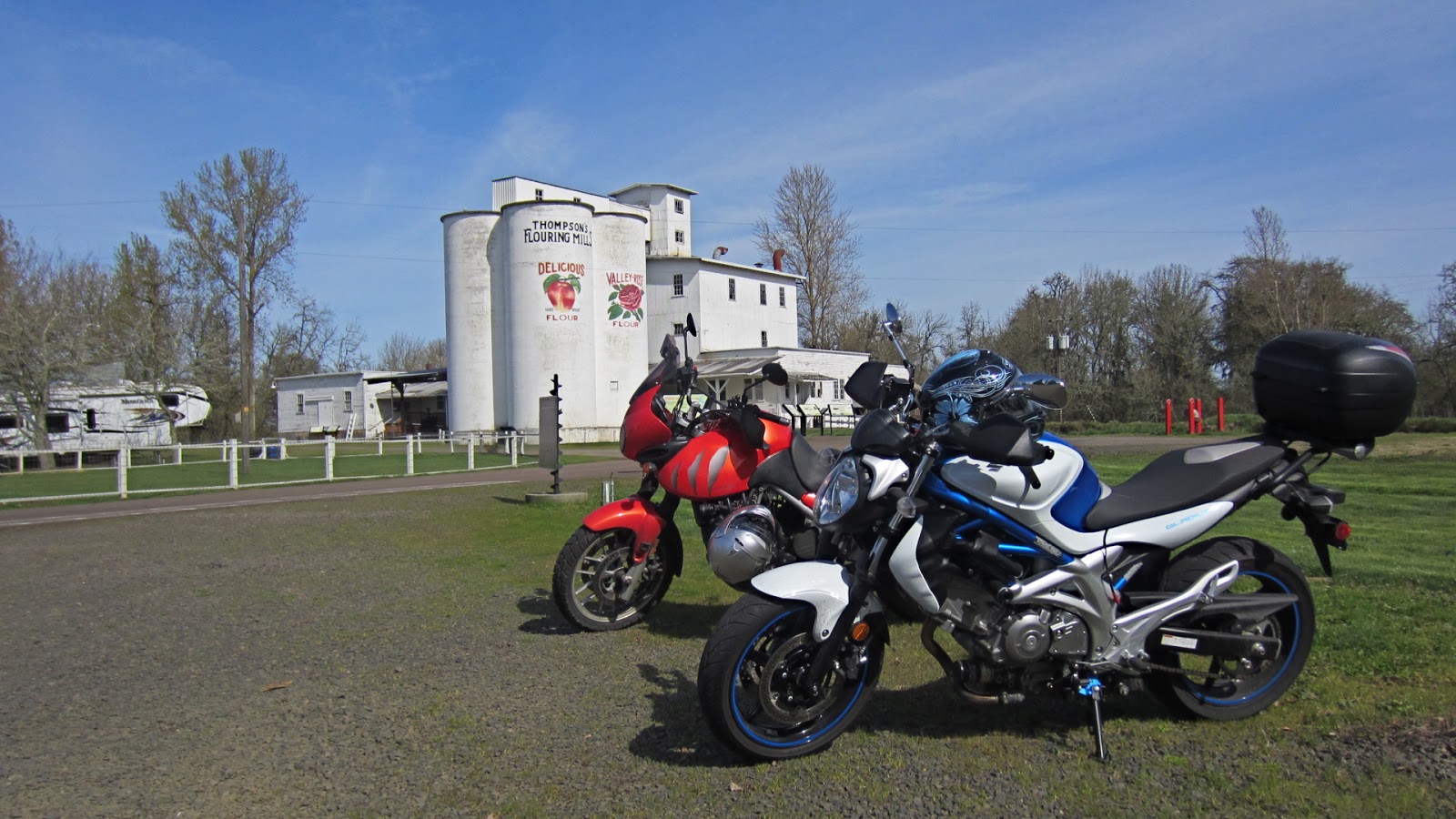 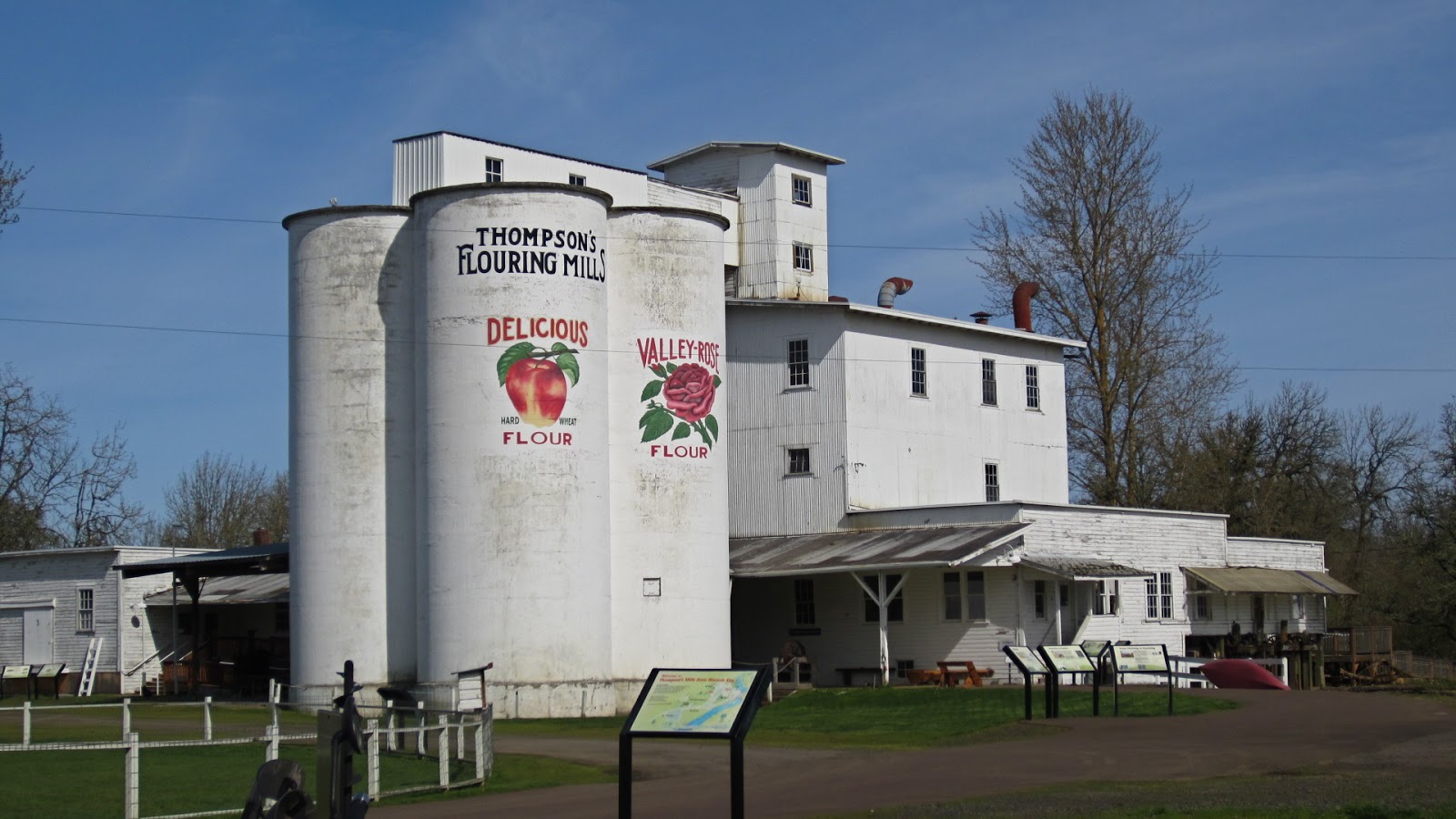 Once inside we were treated to working displays showing some of the belts, gears, grain elevators, and augers of days gone by. 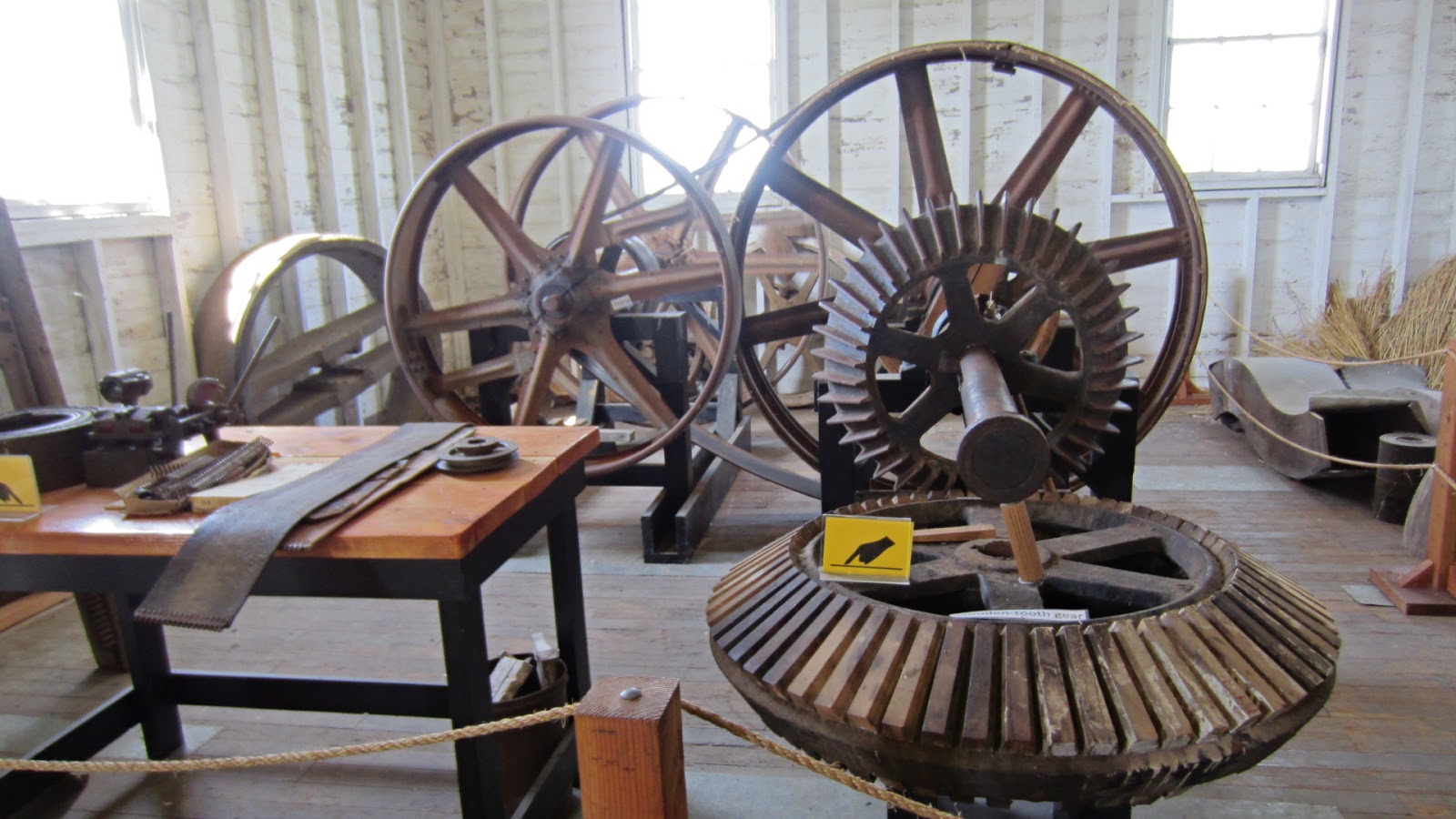 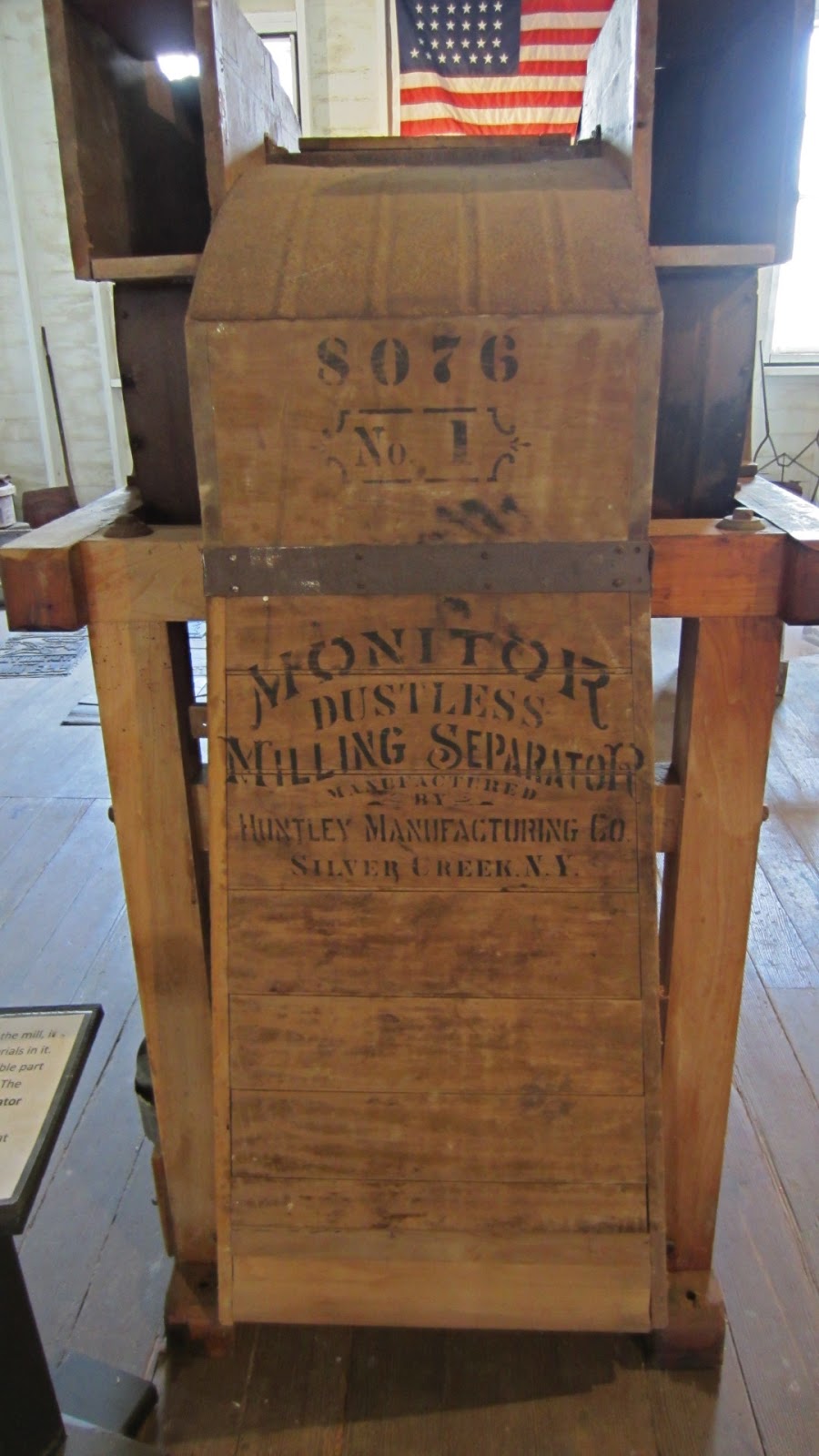 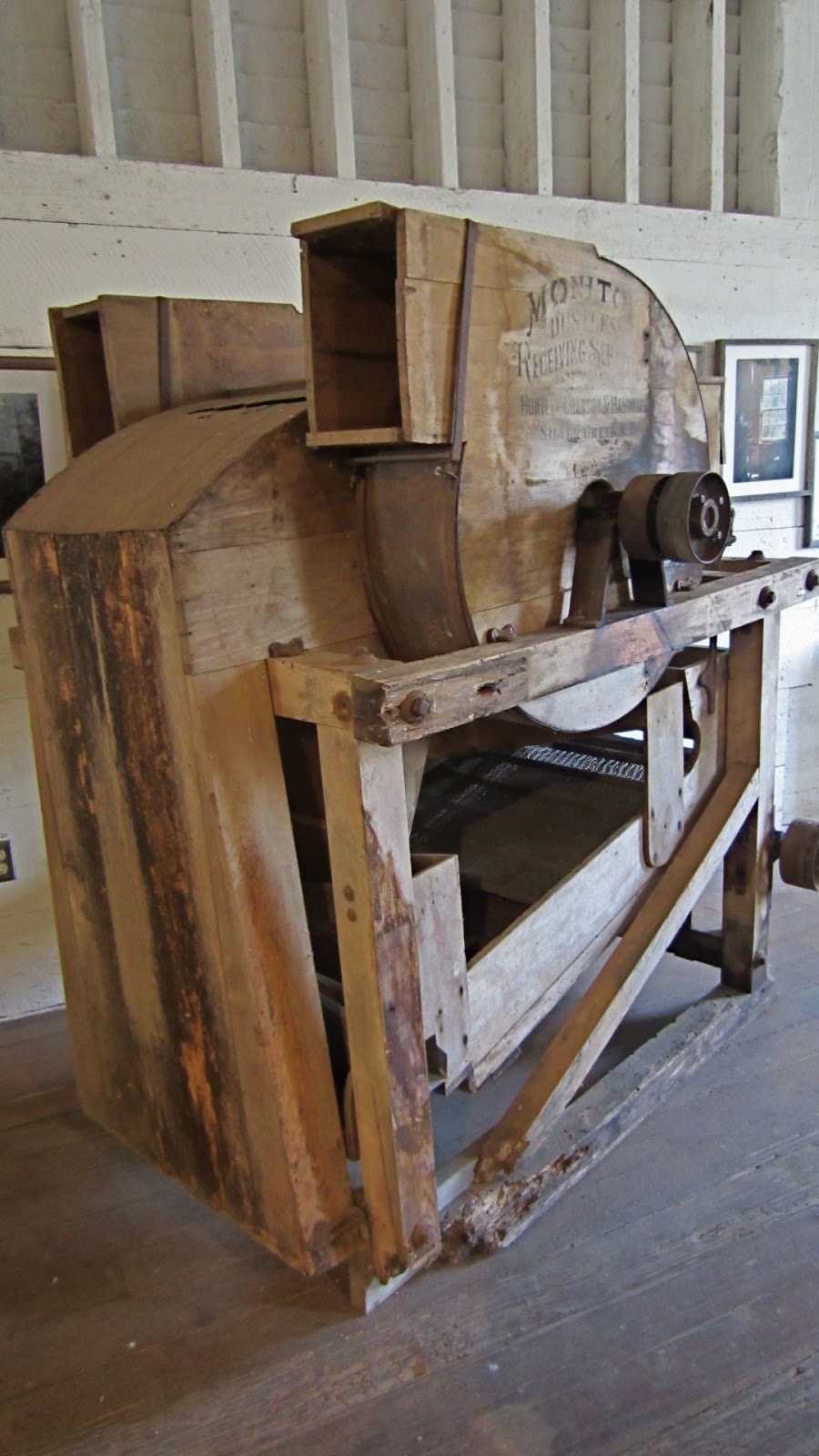 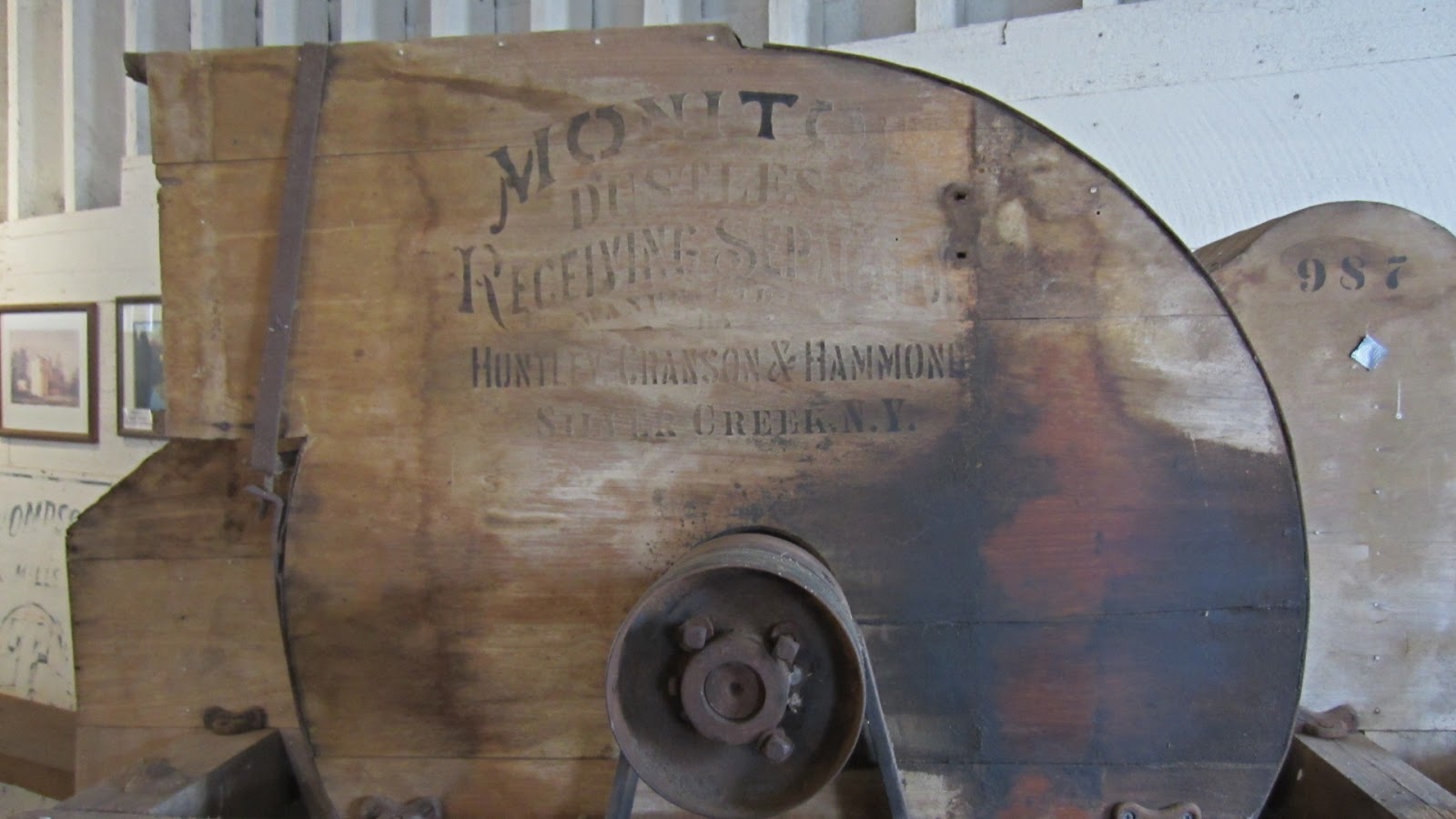 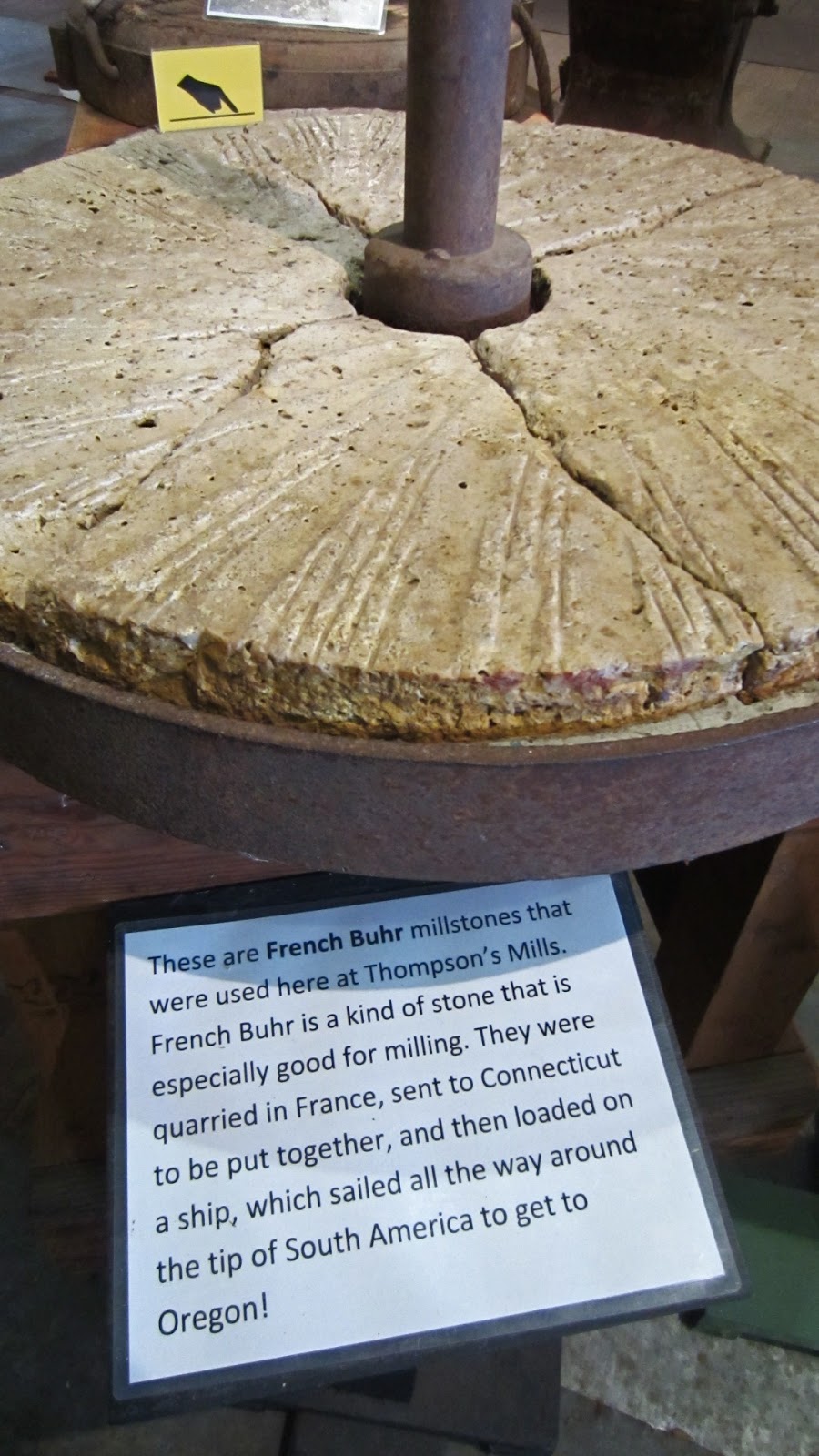 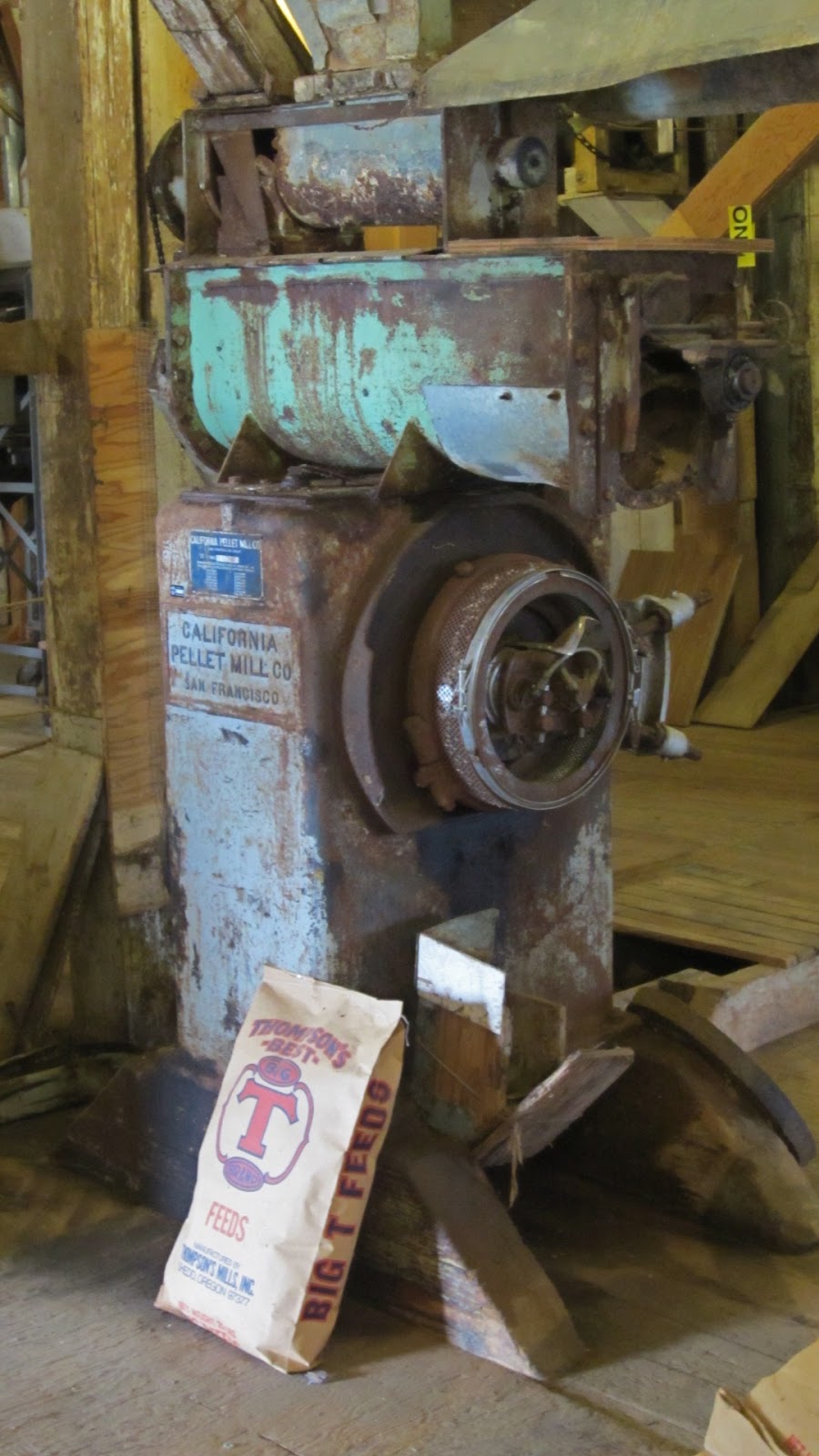 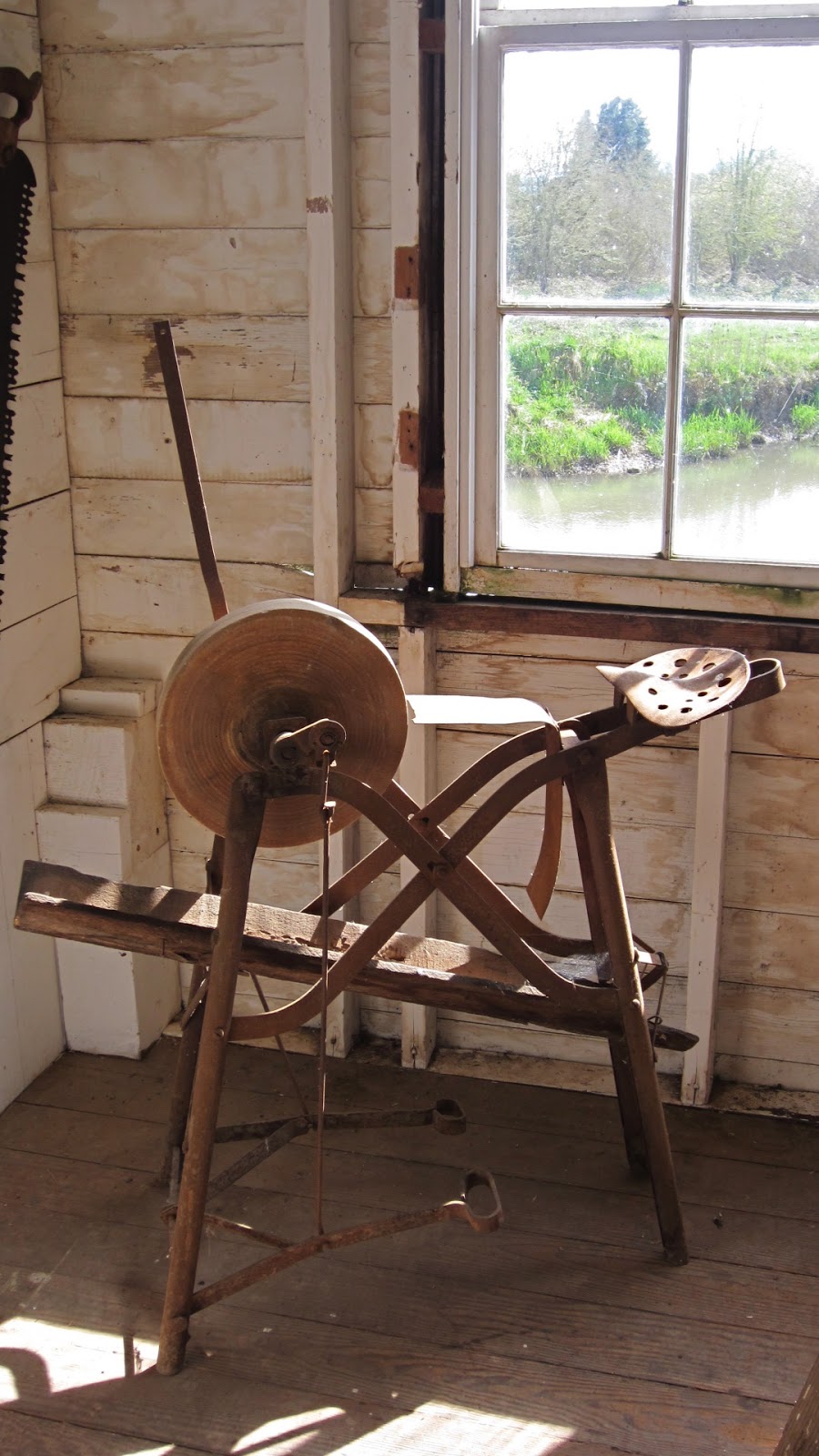 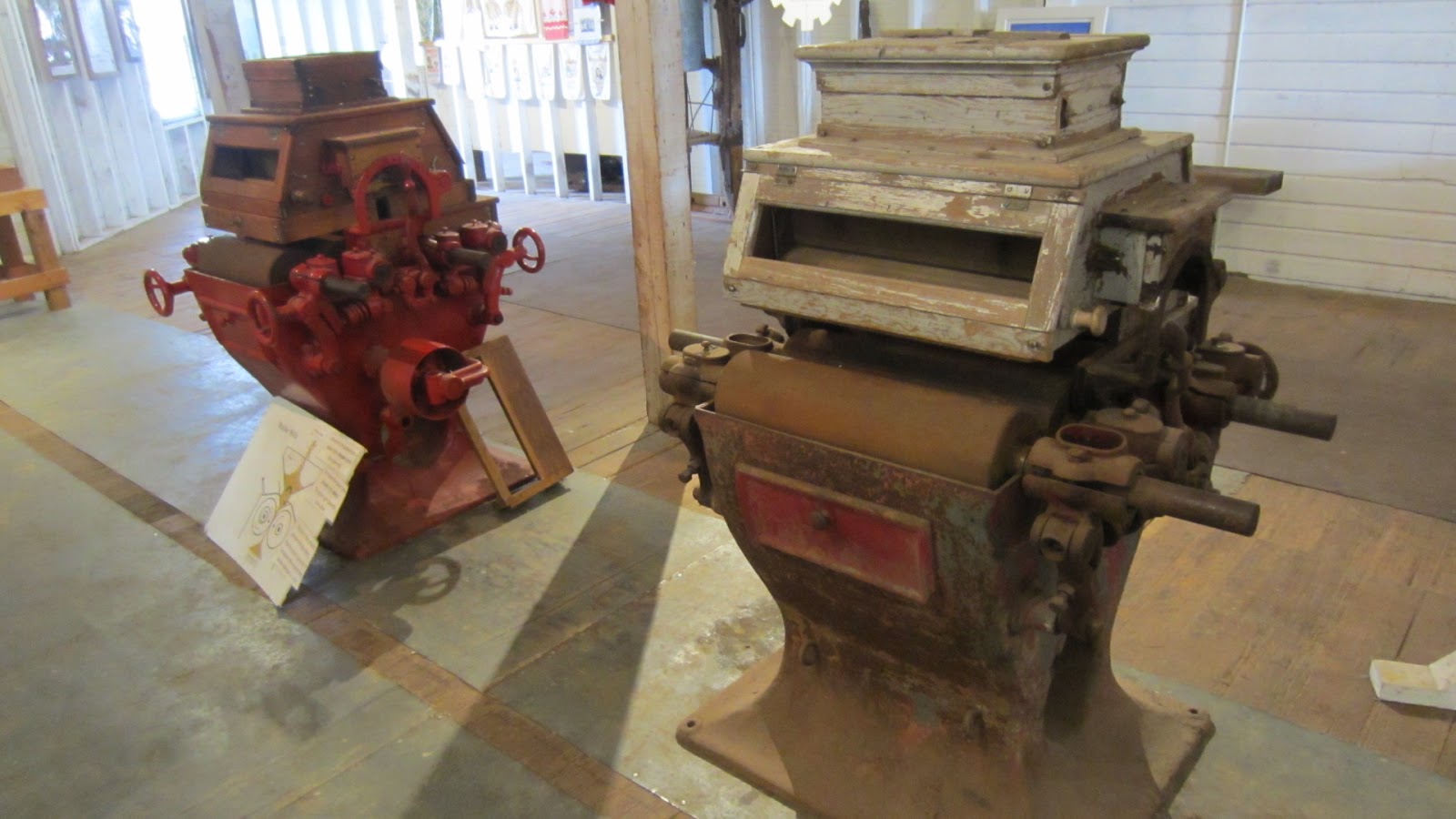 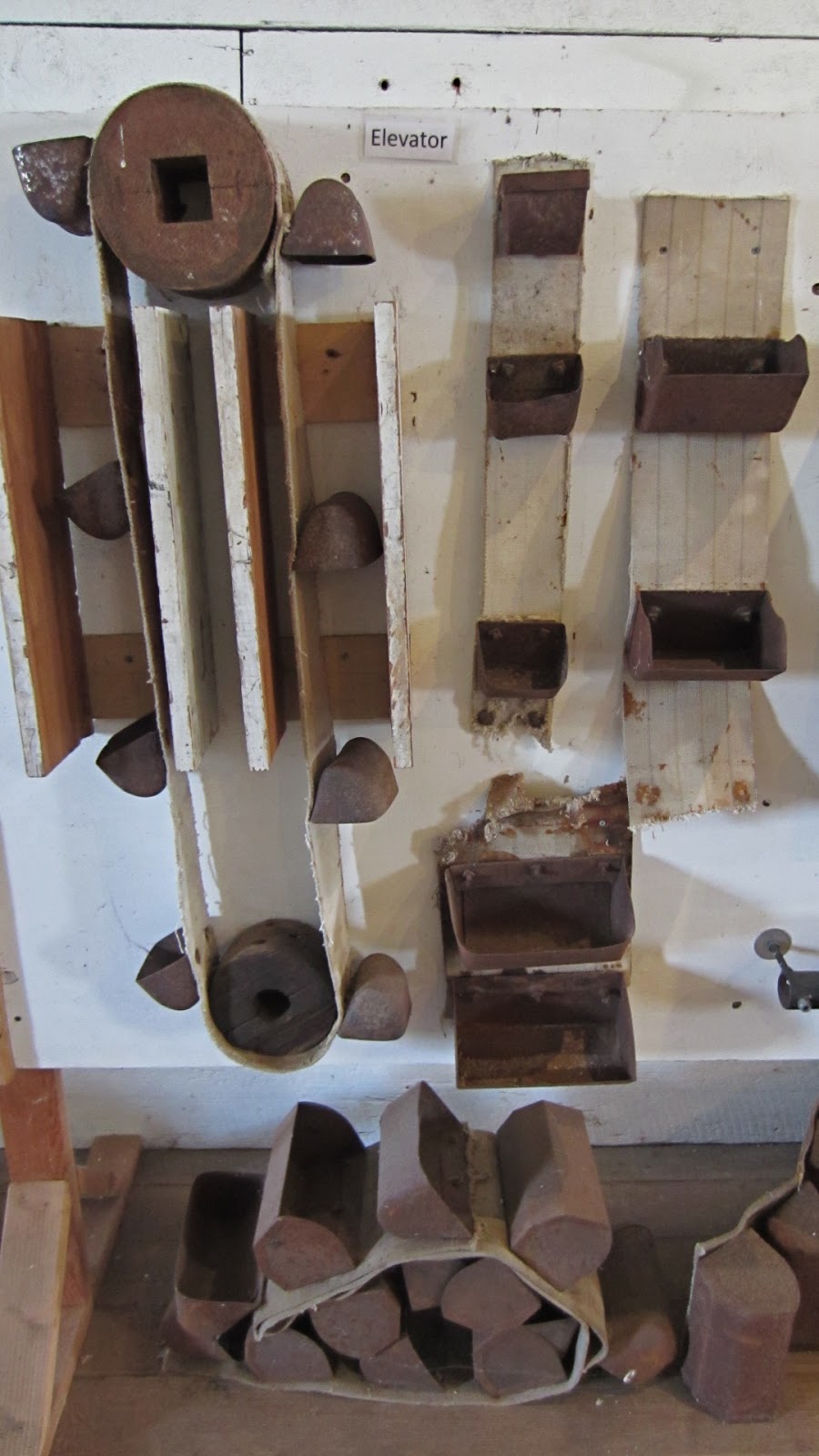 The tour guide even guided is through the basement, opened the gates to the mill pond and started the last remaining turbine.  When we went back to the main floor the mill was turned on and we watched all of the original elevators and belts move.  It was quite a sight and must have been really loud and dusty back in the day.

As we went back outside we were greeted by the resident chickens, and one rooster. 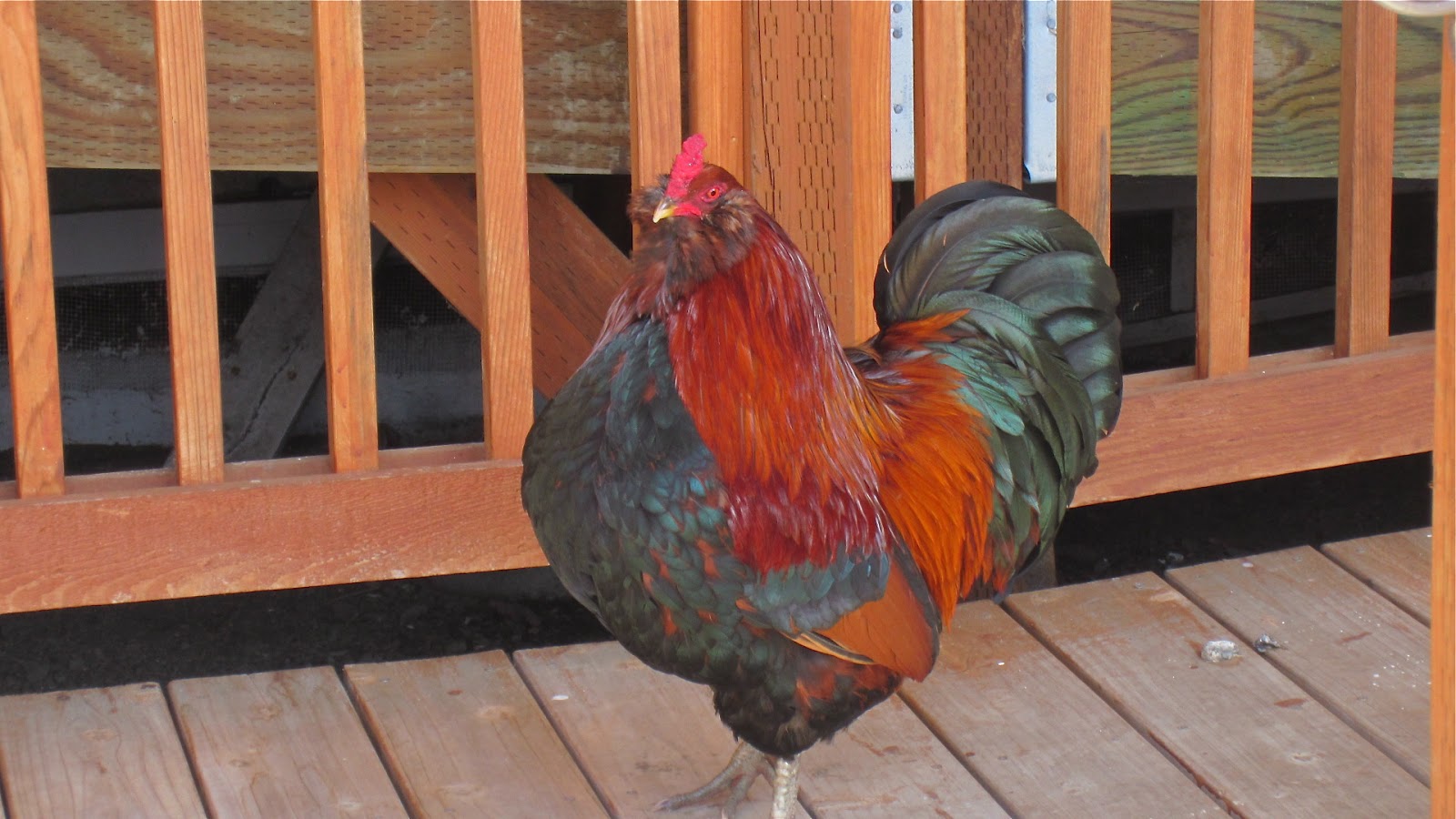 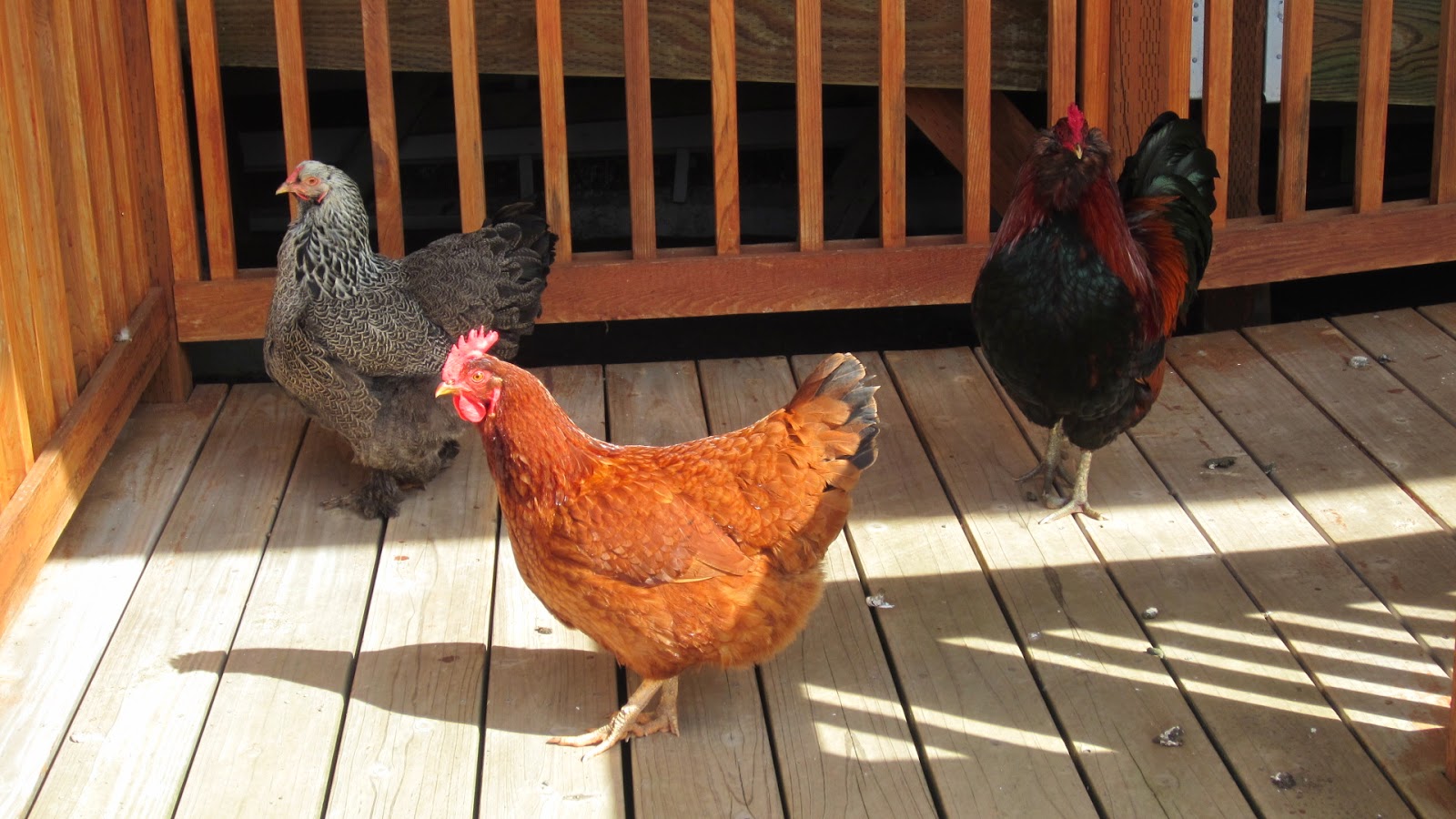 A sign on the outside of the mill showed some of the old advertising from when they produced cattle and poultry feed as well as flours. (They mixed molasses with the grains) 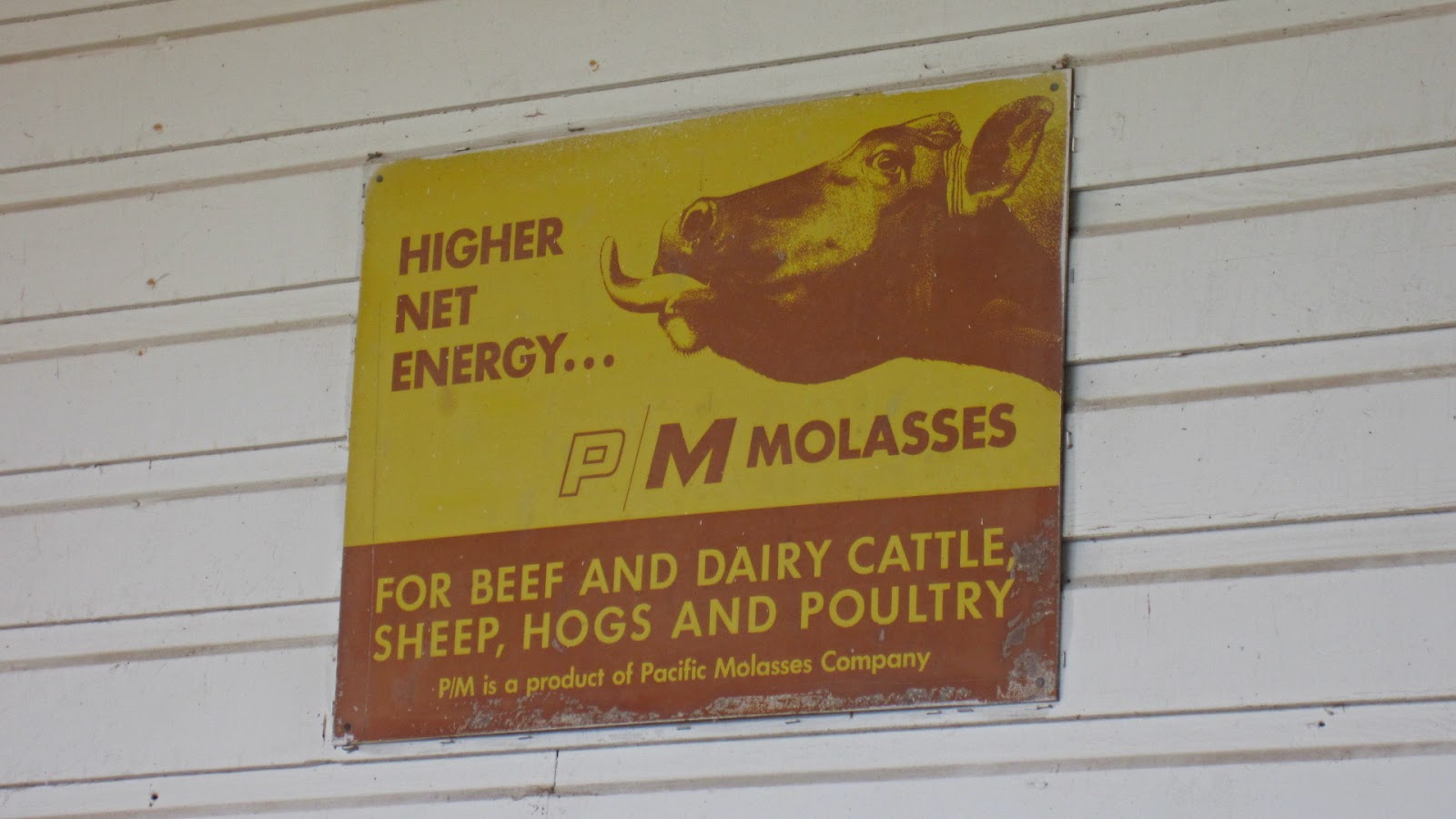 As we walked back towards the bikes we noticed there were more chickens, as well as ducks and turkeys milling around the farmhouse yard and were starting to wander towards us.  The park host had added a feeding station and they were looking for some grub. 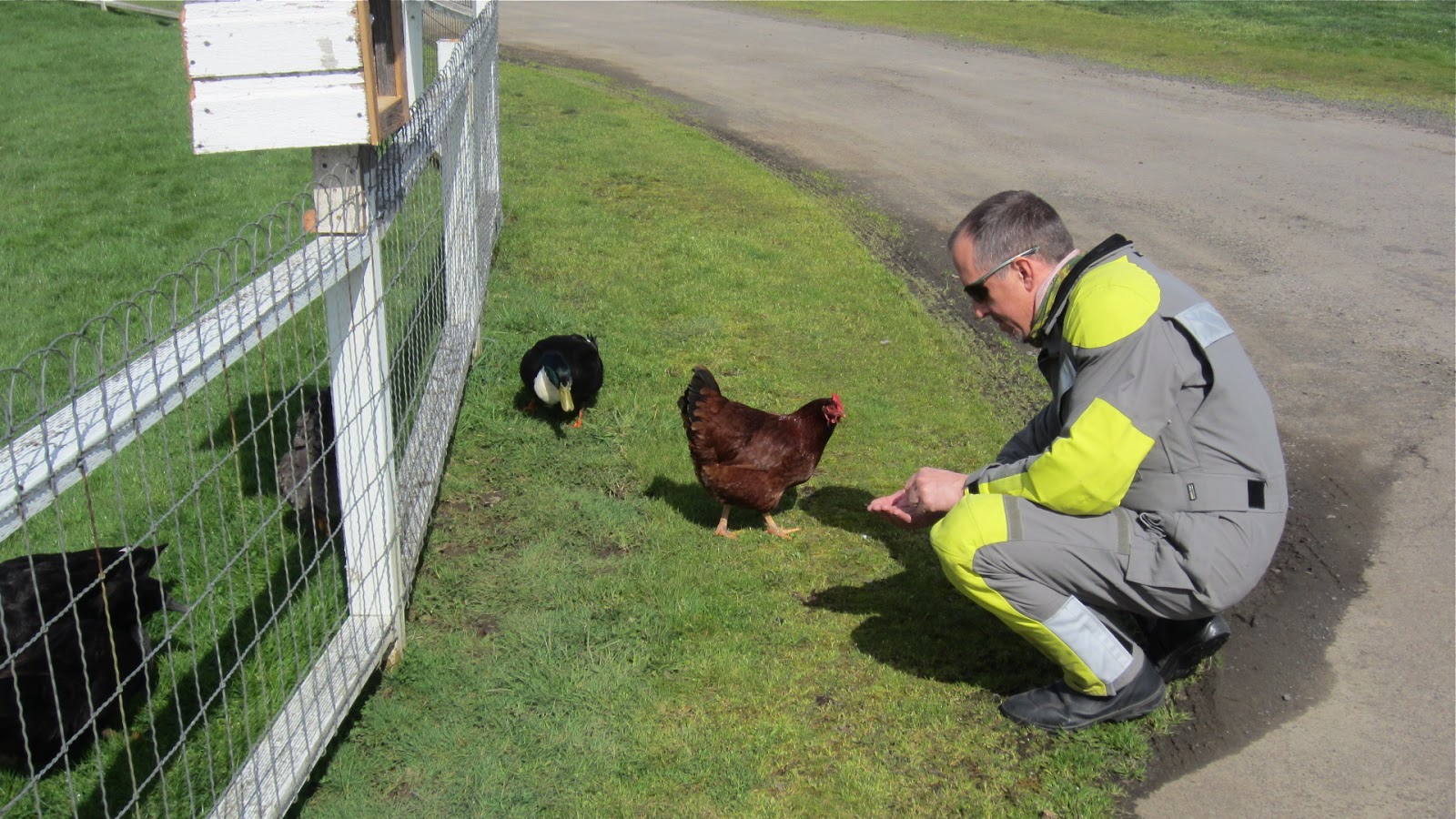 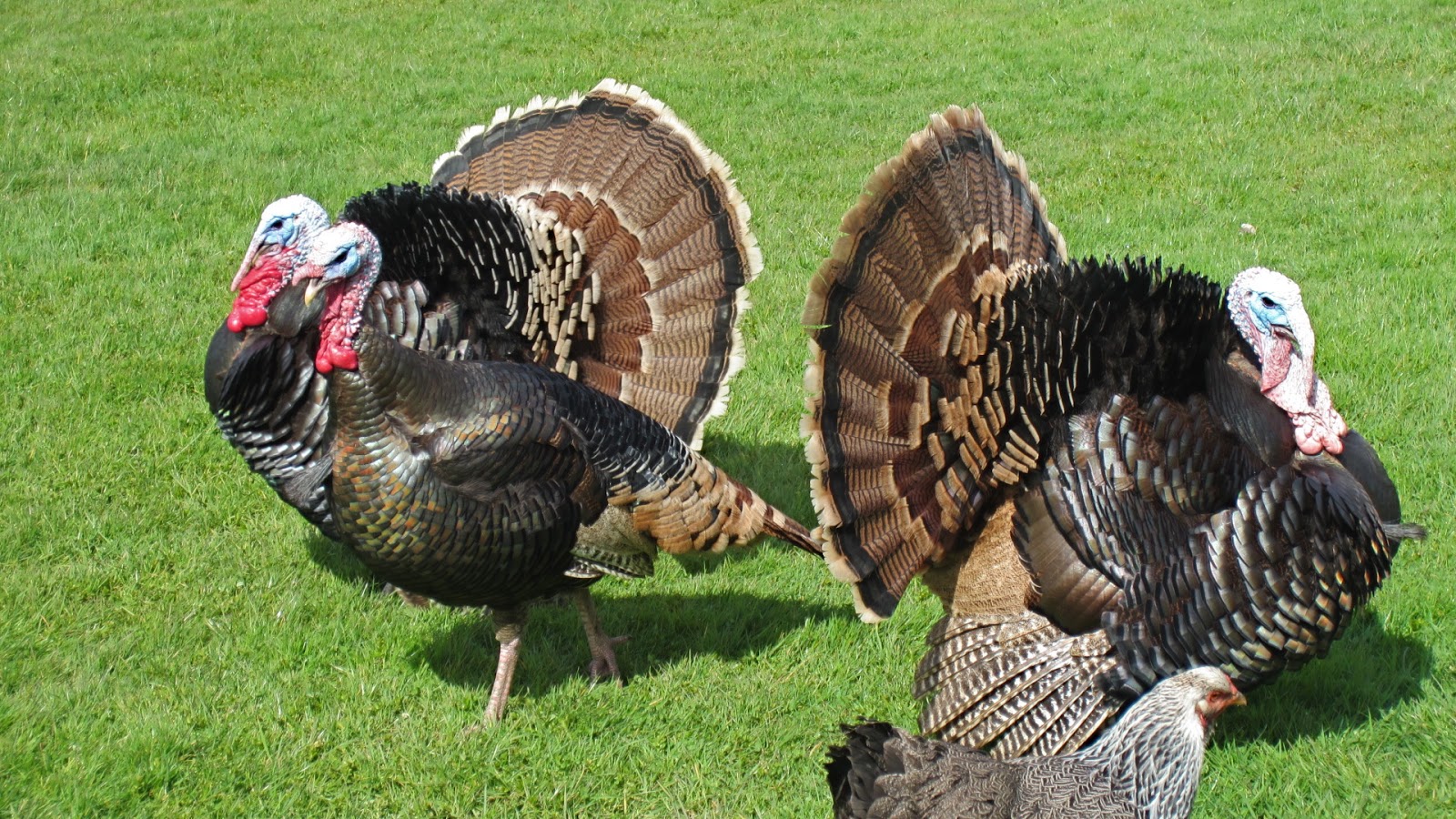 They had the largest turkeys I'd ever seen.  A park ranger came and talked a bit and said the poultry came with the place.  A lot of them are heirloom and have just reproduced and kept the lines going.  They were true free range and could wander at leisure.  While it was fenced in front, they have 86 acres at their disposal at the back of the yard/property.

We had parked the bikes by some picnic tables so it was the perfect opportunity for a snack in the sunshine.  We stalled and soaked up the sun for as long as we could then got back on the bikes and headed further east then south.  Troubadour had a route in mind to find a few more covered bridges. 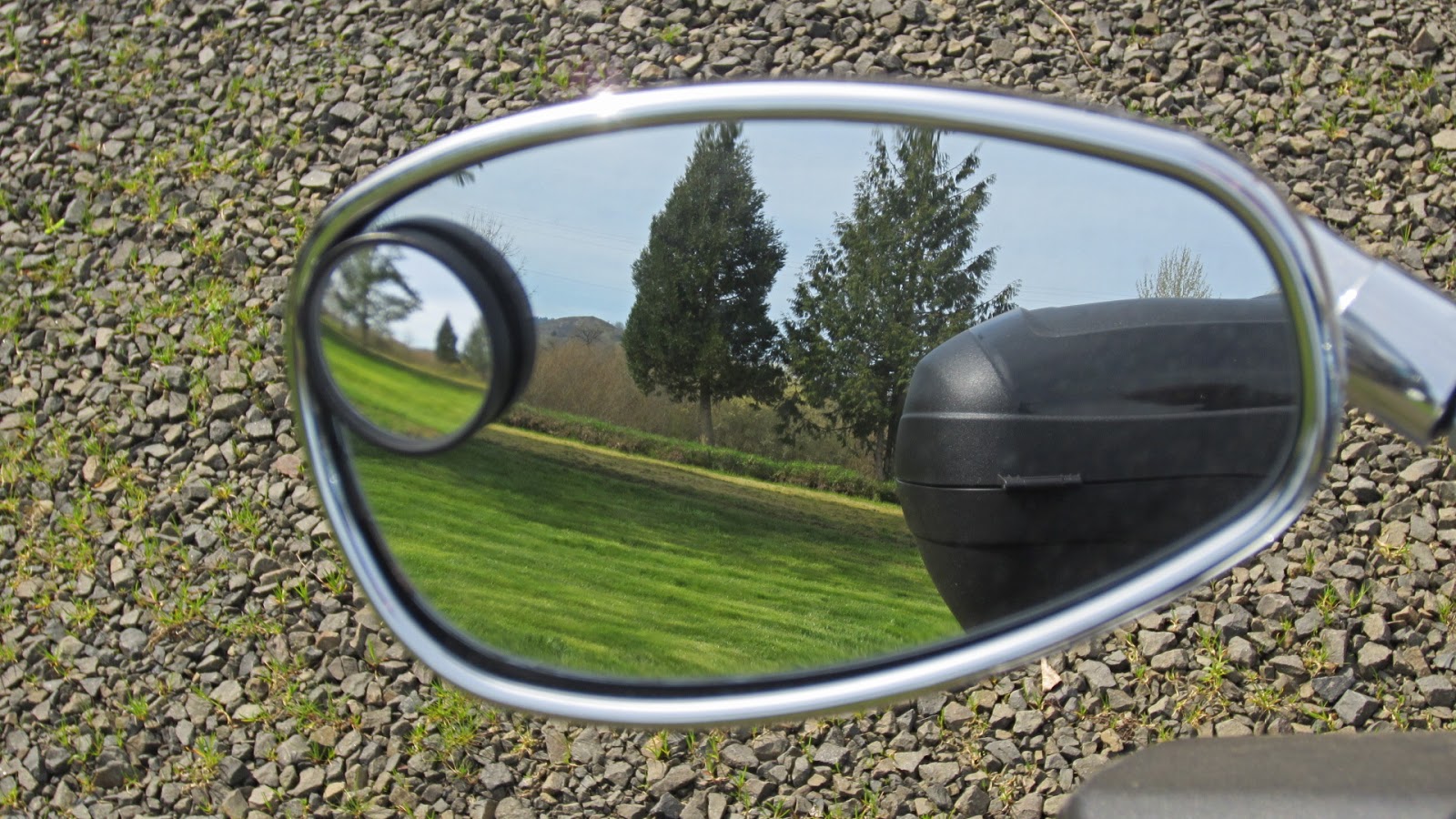 ToadMama - I think I need some of those stick-on googly eyes for my top case when it photo bombs. 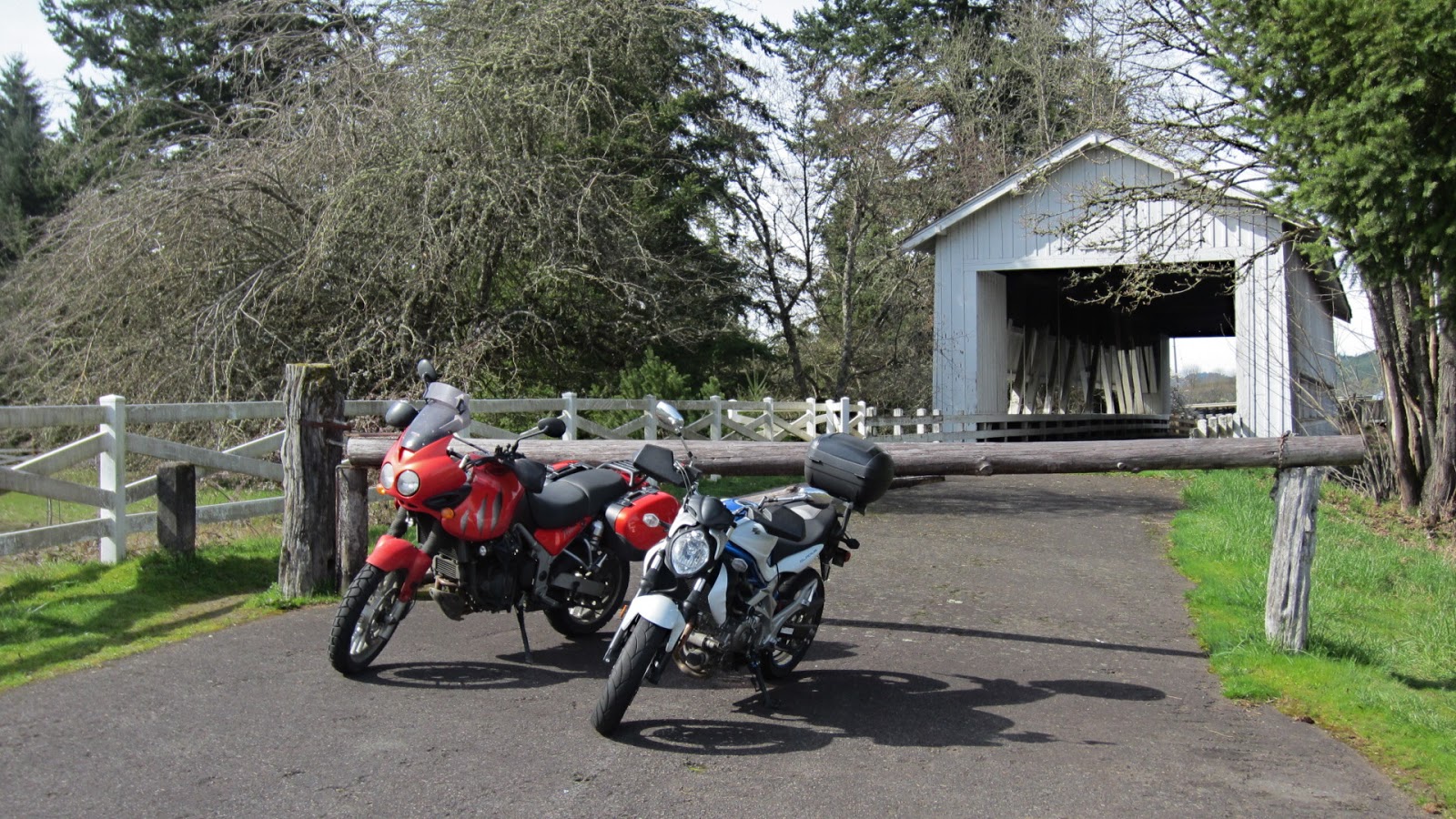 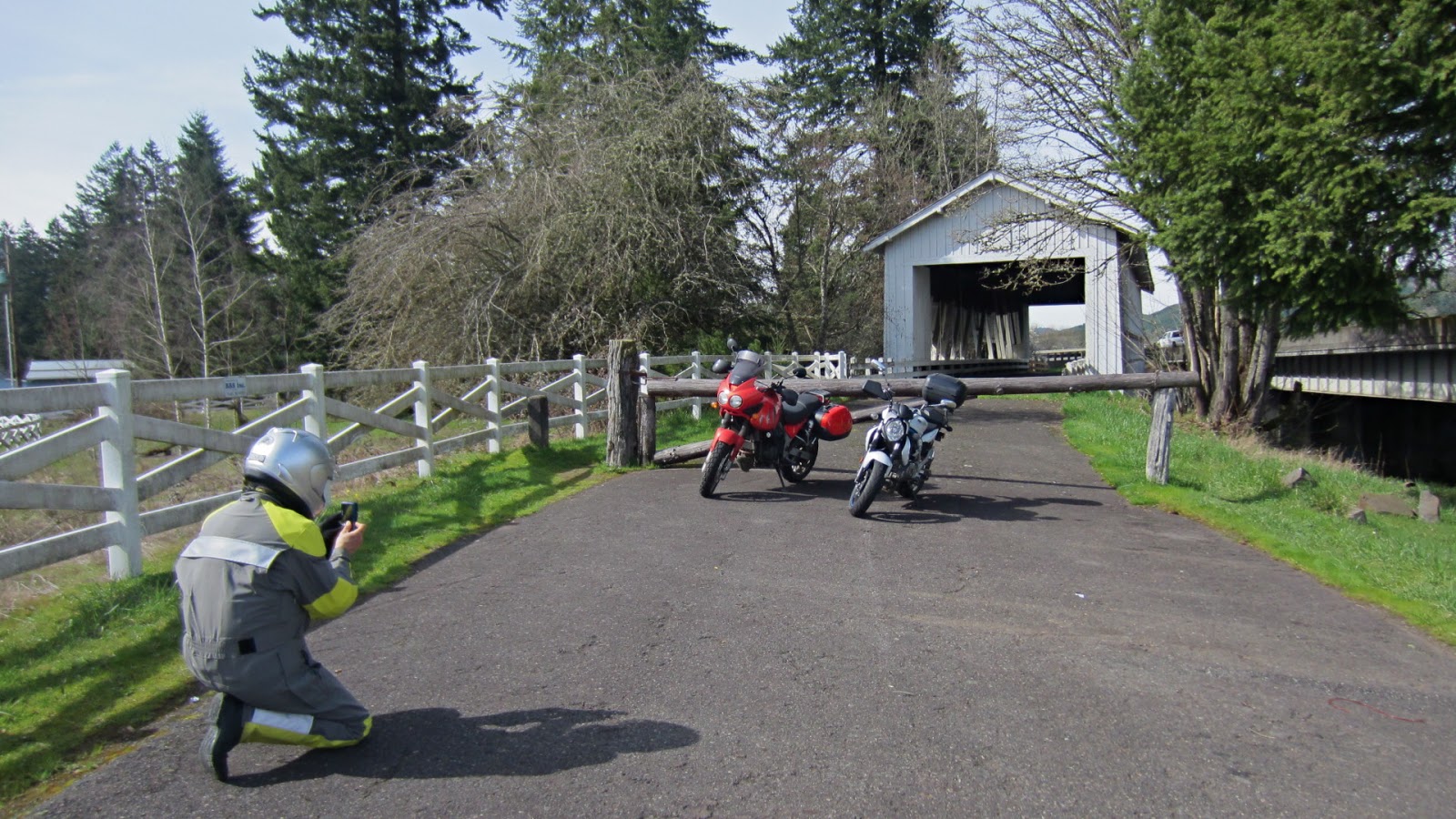 Further south and we saw the Mohawk River (Earnest) covered bridge.  The original bridge was built in 1903 but was replaced in 1938.  This bridge was appeared in the movie Shenandoah filmed in the 1960's. 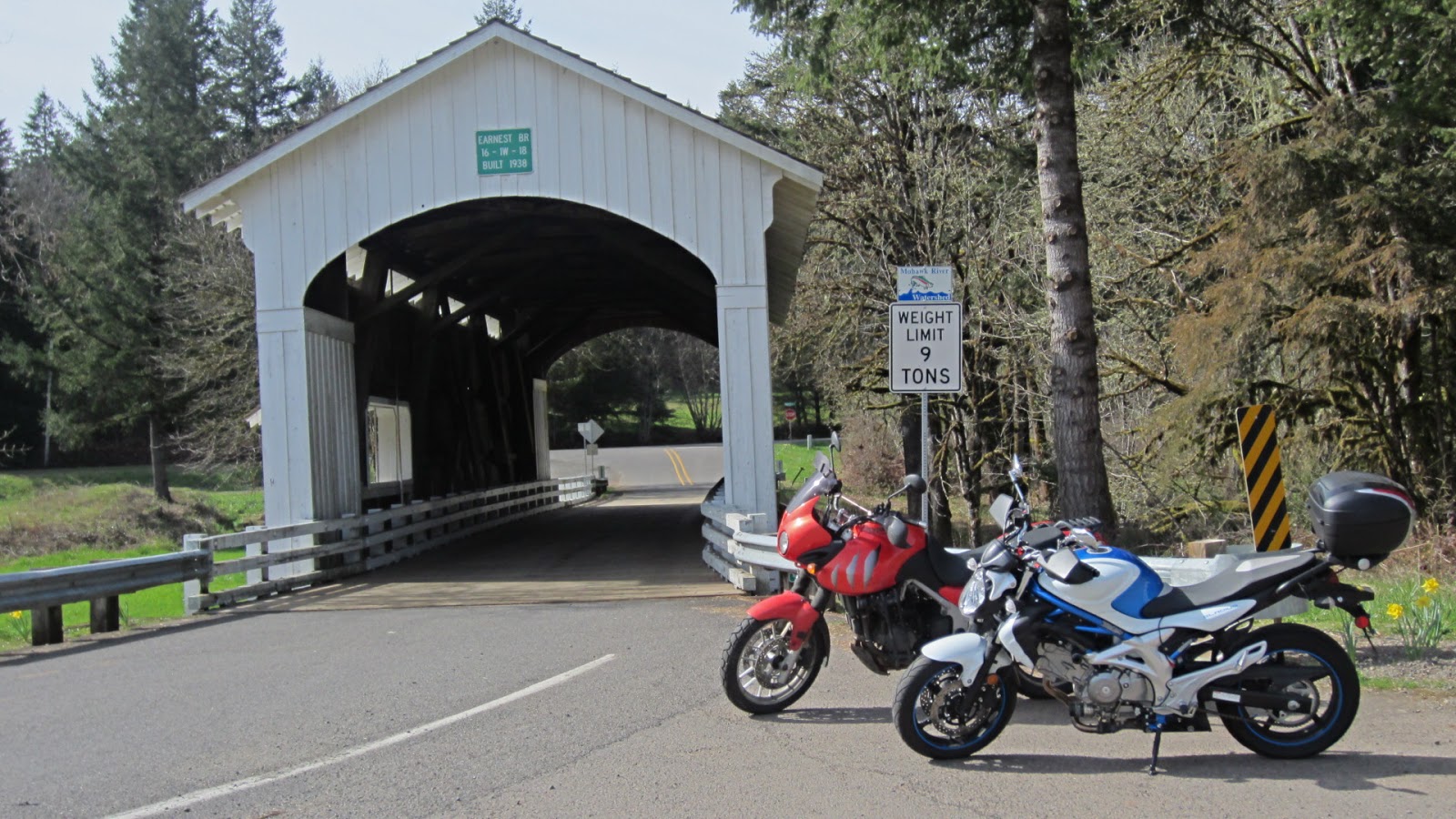 Back on the bikes and we came to the last covered bridge of the day, the Mill Creek (Wendling) Covered Bridge, built in 1938. 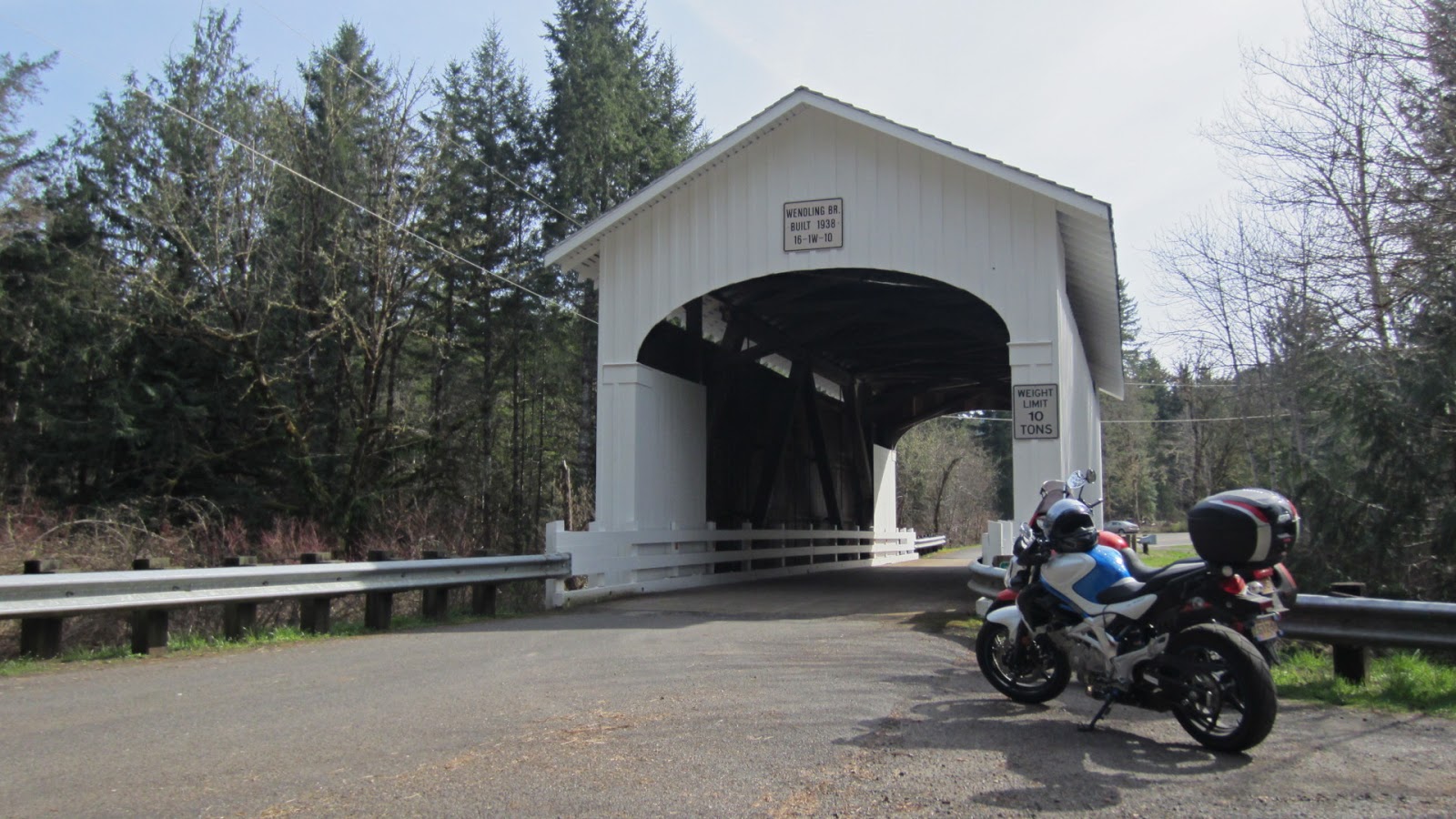 Wendling Bridge was the last stop of the day, but the best riding was yet to come.  We made our way out to Marcola Road then south to Hill Road and east on McKenzie View Road.  If you click on this LINK you can see part of the route.  We were on the upper orange line between Hill and Coburg Rd.  Fun bits of twisties in there with a little elevation change.

We went north on Coburg Rd into Coburg, then into Harrisburg and north on Peoria Rd and into Corvallis.  From Harrisburg to home, it was a little blustery and the clouds rolled in.  It cooled off but it never did rain.

We arrived home about 4:30 pm with smiles on our faces and tuckered out from not riding in a while.  While Troubadour commutes by bike as often as he can, he hasn't been doing much pleasure riding lately.

" Springtime is the land awakening.  The March winds are the morning yawns." - Quoted by Lewis Grizzard in Kathysue Loudermilk, I Love You
.
Posted by Trobairitz at 6:53 AM 43 comments:

Covets or Coveting:  verb - yearn to possess or have....

The Gladius doesn't seem to be a popular bike in the USA, but by searching websites online I can find dealer options and accessories that aren't available here.

One day, a year or so ago, I saw a picture on the Suzuki UK website and I have been drooling over it every since.  I have a copy saved on my work computer, home computer and even my iPad.

Suzuki UK sells a kit for a checkerboard pattern on the petrol tank side covers as seen above. It is officially called the Chequered Tank Design Set 990D0-44H03-PAD, and retails for £145 (approx $242 USD).  From the website I can't tell if they are gel covers, stickers or exactly what.  All I know is I like them.

On another website I found a description that says: "Two silver S marks and stickers set for the side panel covers in same design are included."

Yet another website describes it as "tank design cover" and "Black and white checkered graphic  to protect your fuel tank.  It not only adds protection, but looks stunning and gives a real sporty look."

So, why if I like it so much have I not bought the kit?  Well, I am having a hard time justifying spending the £145 plus shipping and exchange to US Dollars for stickers.  It would be close to $300 delivered.

It would be one thing if it was a true farkle - functional and sparkly.  But this is just pure aesthetics with no real function.

We've been to a local vinyl piece that makes decals and signs and such and they wouldn't touch it. They said they make the pattern in sheets and would have to cut around it with a razor blade and that they couldn't guarantee the squares would still be square when they went around the angles of the cover.

You wouldn't think it would be that hard to replicate.

What do you think?  Too much or just the right amount of flash for Max?

Any artsy type folks out there with any ideas on replication and/or vinyl application?

Well, technically Max is a 2009 model and is 5 years old, but he lived the first two years at a large motorcycle orphanage in Beaverton, Oregon waiting for someone to take him to his forever home.
On Saturday March 5, 2011, we picked the bike up from the shop after having to wait a few weeks for the rectifier recall to be fixed before they'd let us ride him off the lot.

It was a cold and rainy day and Troubadour gracious rode him home for me.

Over the last three years we have gone many places together and seen different people, places, and things.  Click the following highlighted words for blog posts on the trips iffin you are interested.  We've taken three day trips to the Wolf Creek Inn and saw forestry roads and peacocks; moto-camped by Crater Lake; did some group riding; attended the IMBC 2012 in Eastern Oregon; searched for covered bridges on Thanksgiving - twice; and ridden many miles of local roads on day trips.

After owning the bike for 3 years I can honestly say it isn't without its quirks.  It has a really notchy throttle at low speeds with a very abrupt on/off of the throttle.  The pegs are a little high for my long legs and the seat is tilted forward slightly and isn't very padded.  All manageable for the most part.

There are still a few items on the to-do list such a steel braided brake lines and perhaps bar risers. One thing I do want to do is purely non-functional frosting. It serves no purpose but to look good. Sort of a temporary tattoo for motorcycles.  I'll save the details for my next post, but will leave you with a hint:  checkerboard ...........

"  A birthday is just the first day of another 365-day journey around the sun.  Enjoy the trip." - Author Unknown
.
Posted by Trobairitz at 6:53 AM 39 comments:

Get Your Spring On - Blog Challenge

Dar, of Princess Scooterpie fame, issued a blog challenge yesterday.  In her words:


"This challenge is to post a picture on your blog of any sign of spring where you live -
yup I know that a lot of you are still buried under snow & sub zero temps, but amongst all the freezing cold there has to be a sign of spring somewhere! Be creative, it doesn't have to be a pic
of flowers or buds, but something that represents the coming spring to you."

You can find her original post by following this ---->LINK.

Today I strolled through our yard and found a few sights that signal Spring is fast approaching (only 3 more weeks away).  Normally Troubadour wandering the yard with a shovel in his hand transplanting this and that is sign enough for me, but I decided to spare him having his picture in this post, however creative it might have been.

A few short weeks ago the landscape looked like the following picture: 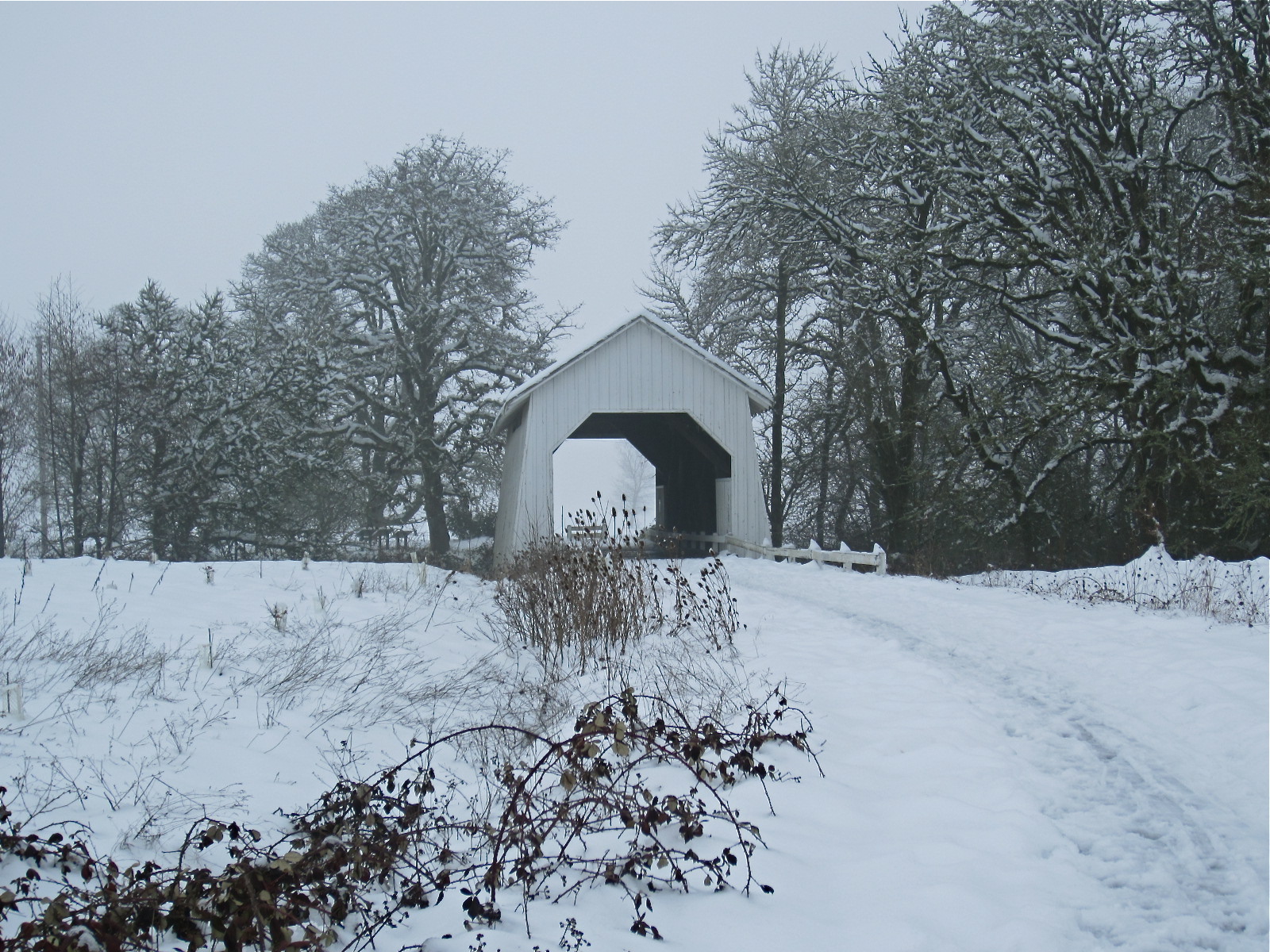 Who knew that hiding under all that snow waiting for warmer weather was green grass and a bunch of daffodils in our front yard...... 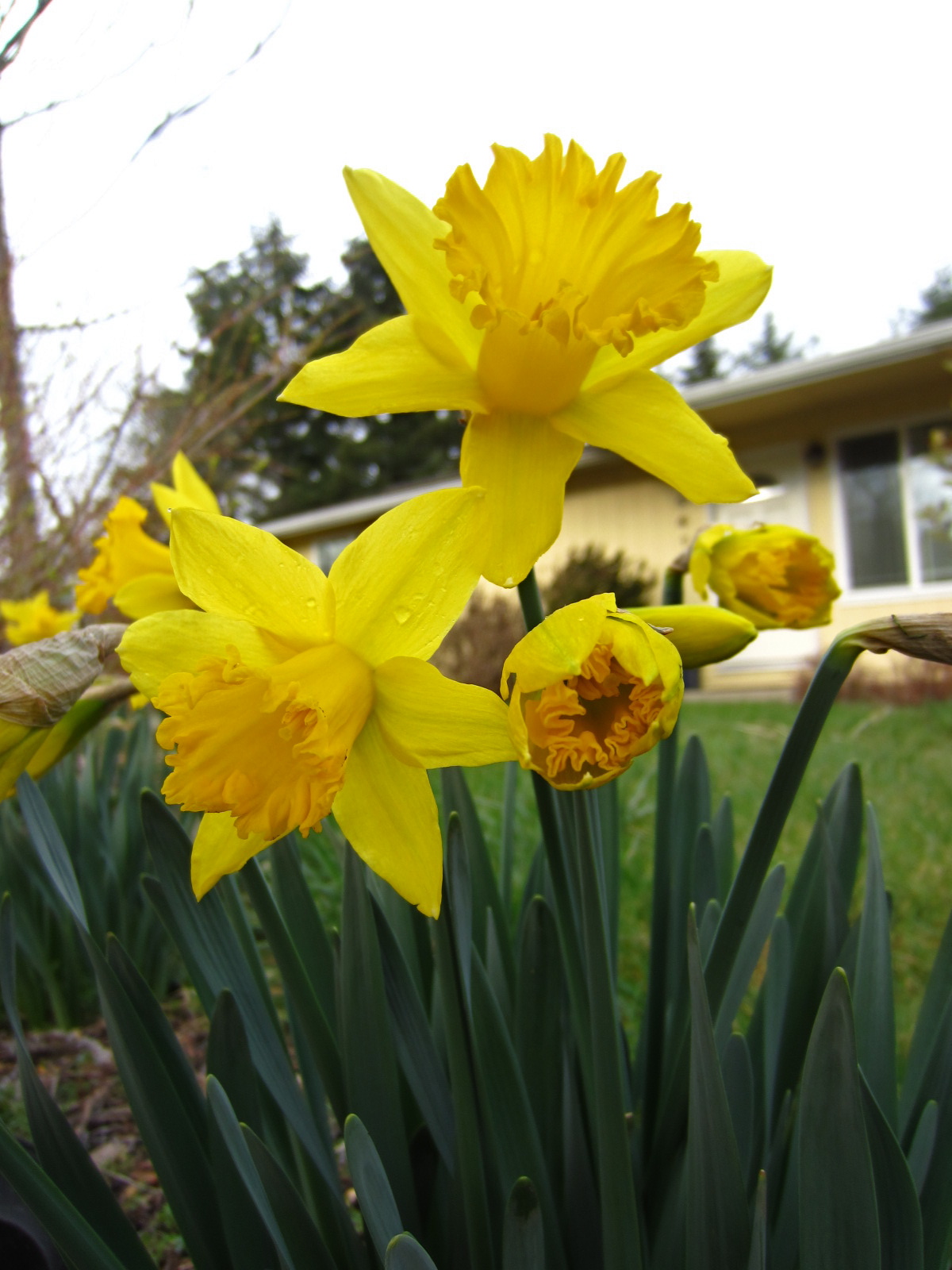 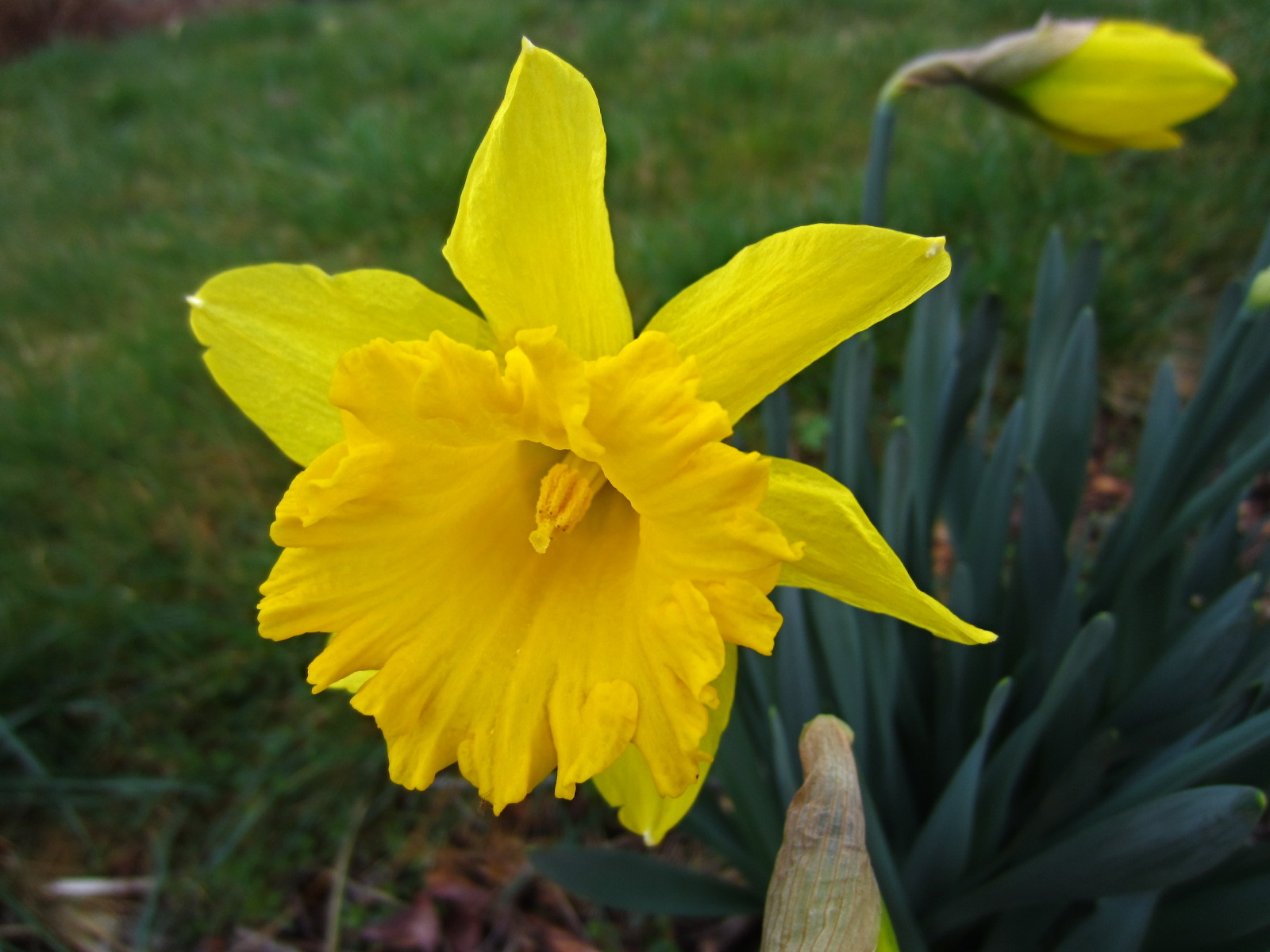 And that the Viburnum Dawn in the backyard was ready to burst forth with its pink blooms.  They aren't quite open yet, but they are ready. 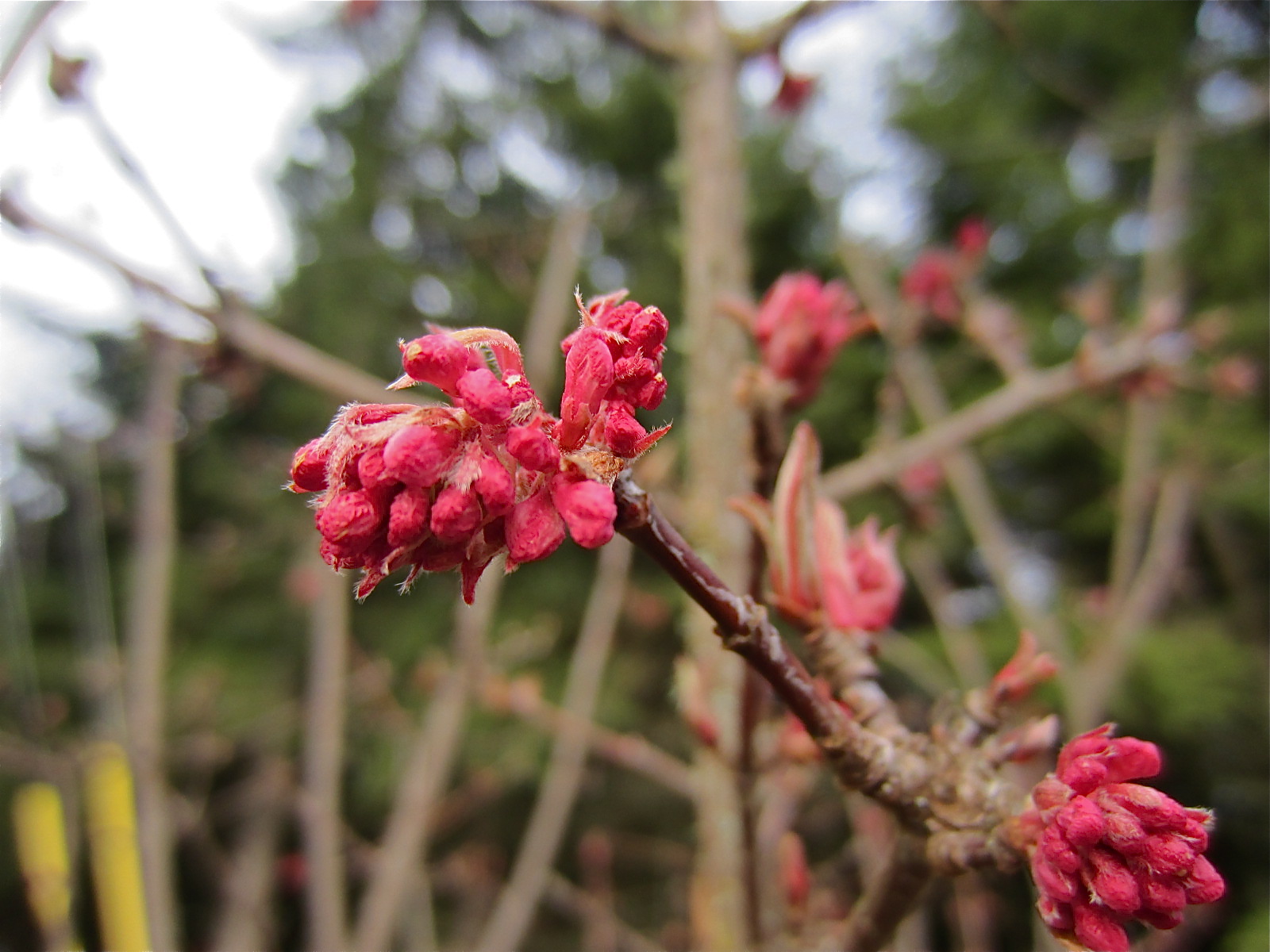 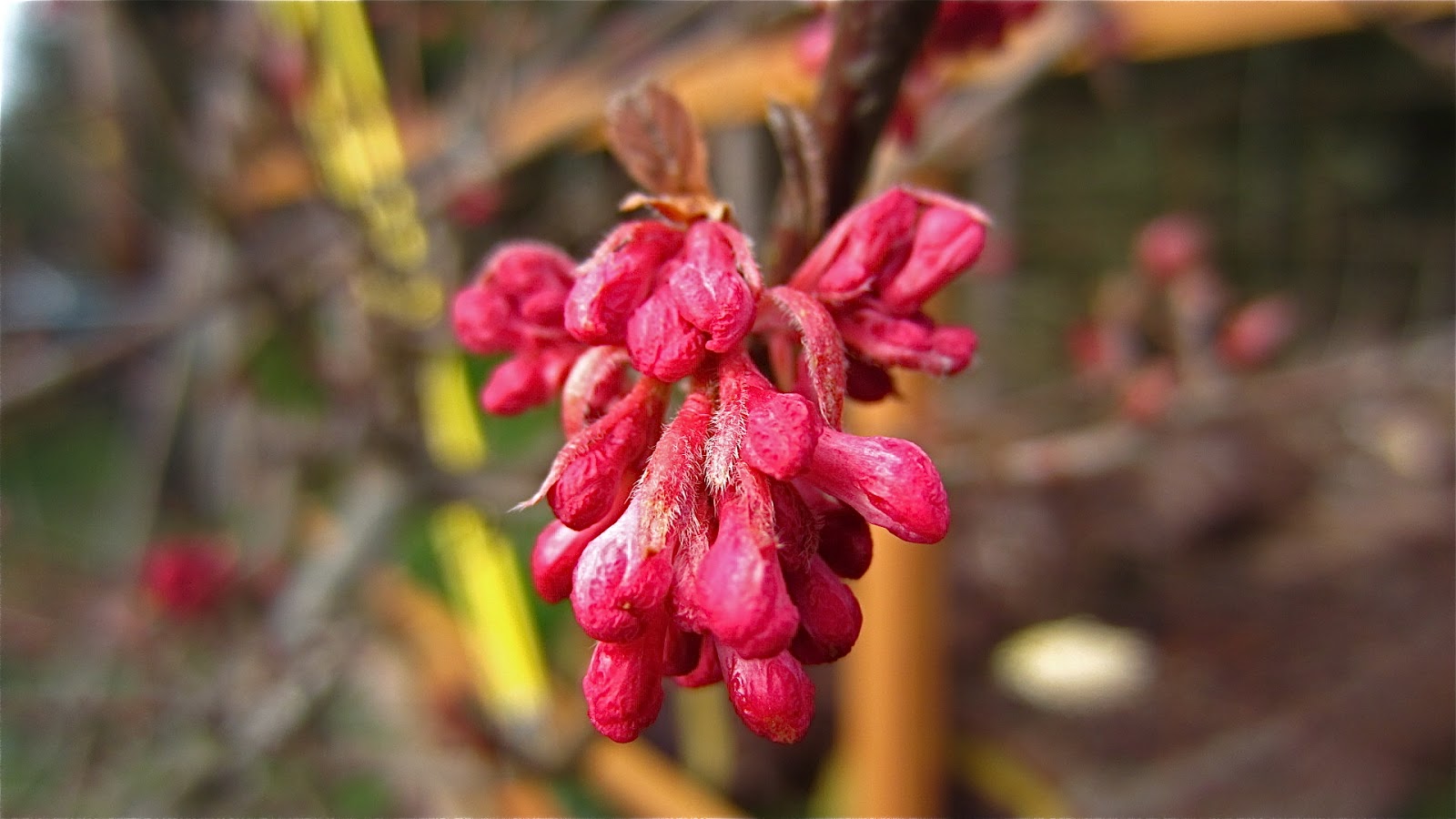 So........what shouts Spring in your part of the world?  Remember, if you participate please comment on Dar's original challenge post too and let her know.

" Spring makes its own statement, so loud and clear that the gardener seems to be only one of the instruments, not the composer." - Geoffrey B. Charlesworth
.
Posted by Trobairitz at 7:05 PM 22 comments: