.
Sunday we decided we wanted to get out for a ride. It was supposed to be cooler than the high temperatures we experienced on Saturday. We thought a chowder run to the coast might be in order even though it was 58˚ and foggy/misty in Newport.

It was about 1:oo pm by the time we finally headed out. We travelled south to Alpine then turned west to ride through the Alsea Falls twisties. It has been a long time since I have ridden through there with just the two of us. Usually we are with a group and I have to worry about how far ahead the group is and then as soon as we catch up they are done their break and off we go, never getting a break ourselves. It was only the second time I'd taken Max on that road.

Soon we were in Alsea and made another turn onto Highway 34 and pointed our bikes west towards the coast. The weather was still warm but was cooling down as we went over the foothills and approached the ocean. I let Troubadour know over the radio that I needed to stop in Waldport for petrol.

We were pleasantly surprised that it was still sunny in Waldport and I thought just maybe we'd luck out and the fog had lifted in Newport. I zipped up all my vents just in case. We made a right turn and headed north on Highway 101 to ride the 16 miles to Newport.

Troubadour remembered a back road that cuts off a lot of the Highway 101 section so we meandered through some unfamiliar twisties and back roads. We did stop for a few pictures at one point. We are in the 44th parallel and have a riding game on the local forum to take a picture of your bike with anything that says 44. This sign caught Troubadour's eye and we made an abrupt stop for a photo opportunity. 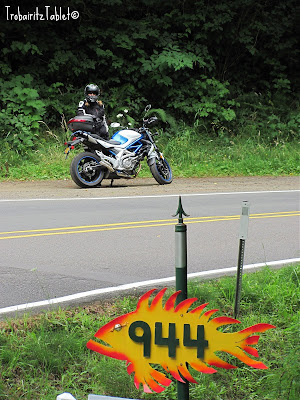 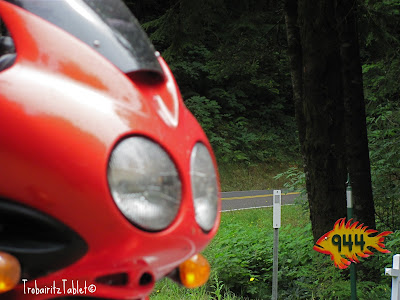 Back on the bikes and within a few miles we rejoined Highway 101 and ran into the fog bank. Heavy fog and mist were wetting our visors. Not enough would build up that a head turn would wipe it clean in the wind so a little index finger action was needed to keep it clear every few minutes.

We arrived at our favorite chowder house: the Chowder Bowl. It has been our favorite since we went there in 1994 while on vacation just after we met. It is a little nostalgic for us. Troubadour had excellent parking karma and found a spot just up the street. 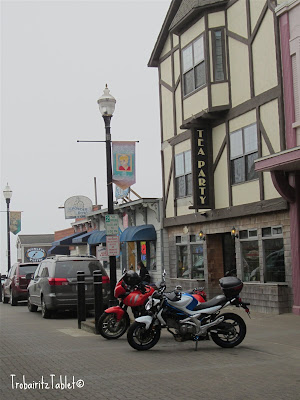 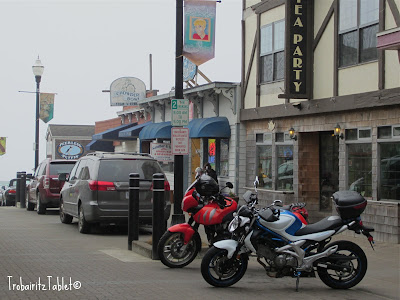 (You'll notice the top case strapped to Max. A leftover from when Troubadour was using it for commuting last week)

We anticipated that since we didn't arrive until 3:00 in the afternoon we had successfully avoided both the lunch and dinner rush. No such luck. There was a line up to be seated.

I noticed that the tables on the patio were not set up due to the weather. We graciously volunteered to sit out in the mist in exchange for being seated right away. No problem. We'd barely sat down before we were given menus and someone had put cutlery and condiments on the table. They even put up the umbrella to keep the mist off of us. It was sheltered enough we decided to take our riding jackets off.

It was perfect for us. Nice and quiet with no screaming children running amok like in the restaurant. Just the way we like it. 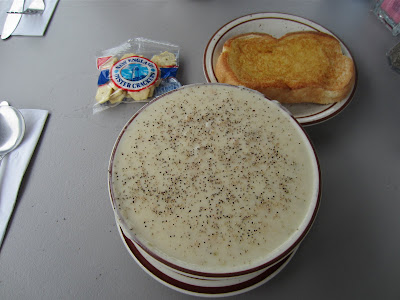 The garlic bread is Troubadour's, I opted for the oyster crackers instead. Usually there is a nice pat of butter on top of the chowder but I was trying to be healthy and asked them to serve it sans butter. 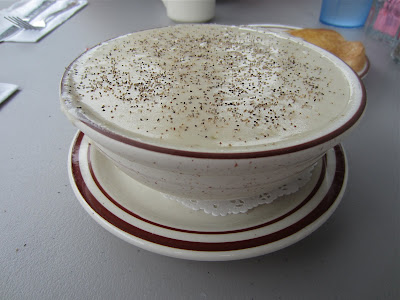 We ate our chowder and listened to the music playing on the radio. It was nice that they had speakers outside. We even took a few candid shots with the camera. 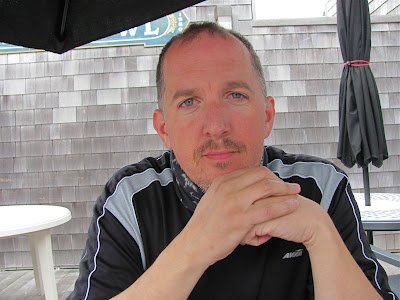 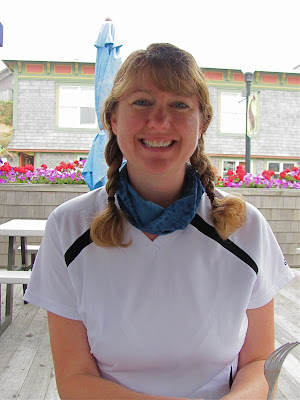 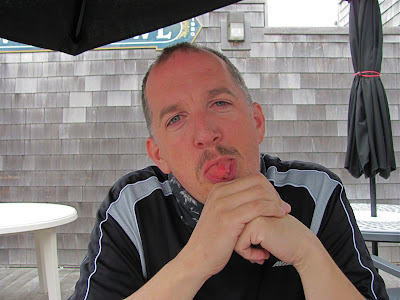 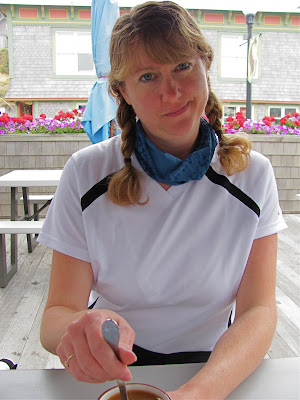 The wind started to come up so we put our jackets on while finishing our second cup of coffee. We discussed which route to take home. It was decided to ride down to the bay front area and then along the river to Toledo where we would join up with Highway 20 heading east.

Before leaving Newport Troubadour stopped for one more 44 sign. 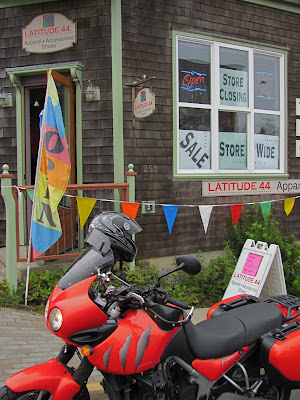 The weather was still misty, but before we'd even reached Toledo the sun was once again shining upon us. Traffic was heavy which is typical for a Sunday afternoon. Everyone that wanted to escape the heat in the valley that morning was heading home. Soon we'd had enough of the traffic and Troubadour made a left turn (north) at Eddyville to take the back road and a more twisty route which leads us to Blodgett and back onto Highway 20, but closer to Corvallis.

I'd been on this road before as a pillion rider. It has some rough sections and no less than 5 rural railroad crossings. Yes indeed, some very bumpy sections that attempted to toss my butt right out of the saddle. It was nice to ride at our own pace through that area though. Not too fast, but not so slow that any cars were catching up. Just a nice ride.

Once in Blodgett we rejoined the masses heading east. It was an uneventful ride into town, but that is a good thing. We arrived home about 6:00 pm and relaxed for the rest of the evening. Well, unless you count going out for groceries after 8 pm. That wasn't exactly relaxing.

All in all I had a great day on two wheels.

"I hooked up my accelerator pedal in my car to my brake lights. I hit the gas, people behind me stop, and I'm gone." ~ Steven Wright
.
Posted by Trobairitz at 7:20 PM