Lucy landed in a local mechanics shop Friday after giving Troubadour some grief on his way home from work Thursday afternoon.  Corvallis motorcycle mechanic extraordinaire Donn diagnosed her with a bad regulator/rectifier.  Luckily Cycle Parts Triumph in Eugene had one in stock and held it for us to pick up on Saturday.

So.....Saturday we rode the bikes to coffee; Troubadour on the XT and me on the Gladius.  It was fairly cloudy out early on, but it had warmed significantly by the time we left Coffee Culture so we opted to ride to Eugene on our favorite back roads stopping for a snack part way there.  The Muddy Creek Charter School makes a nice way point for a break.  It isn't far from home but we hadn't had lunch yet. 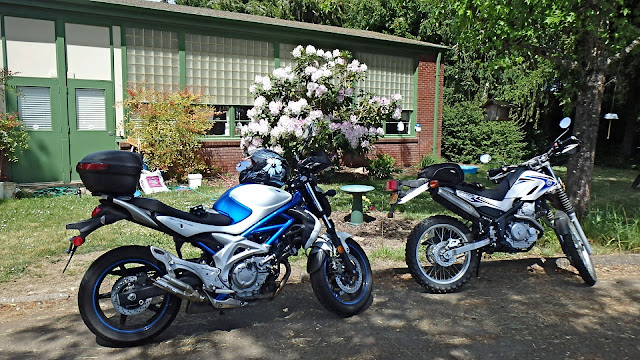 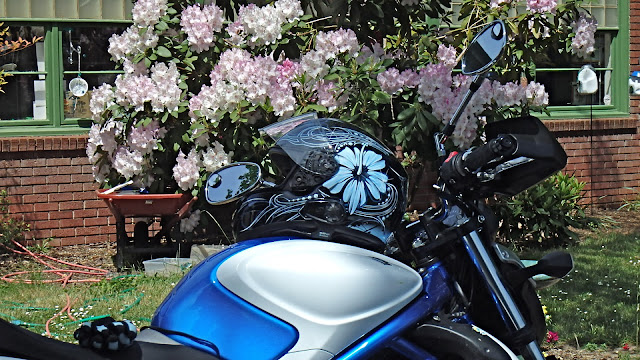 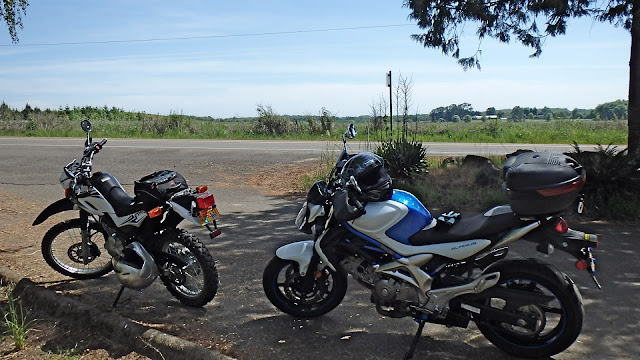 As you can see in the background of the first two pictures, the rhododendrons are blooming in full force too. 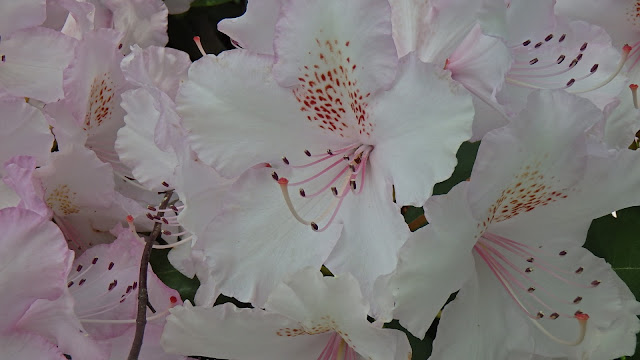 As we arrived in Eugene we turned onto Highway 126 for the last few miles to the shop.  Where it turns to two lanes divided in each direction I spotted a green pickup truck in my left side view mirror.  It appeared he was driving with his left tires up on the curb of the center median.  I double checked 3-4 times thinking my mirrors must have been vibrating and I was seeing things so I chatted to Troubadour on the Sena and gave him a heads up to be wary.  Sure enough he confirmed I was not hallucinating and the guy was in fact speeding and driving half on the median.

We immediately slowed to get out of the way. As he rode by he and his passenger were both drinking and in a company truck no less. And not from bottles or cans either, but from glasses.  We hung back giving him a wide berth thinking he was going to plow into the cars in front of him at the next light. Luckily he didn't.  He turned off and we continued on shaking our heads.  If we had of had bluetooth to call 911 on our phones we would have and it would have been good to have a GoPro at that point as it would be easier to report after the fact.

As it was, by the time we got to the Triumph shop he was long gone and we could only shake our heads and hope he didn't kill anyone and that someone else phoned it in.

Waiting for us at Triumph not only was the new rectifier, but drool worthy motorcycle eye candy. Triumph has had a love affair with red, black, and grey lately and it seems to work.  Combined with a matte finish we thought it very eye catching. 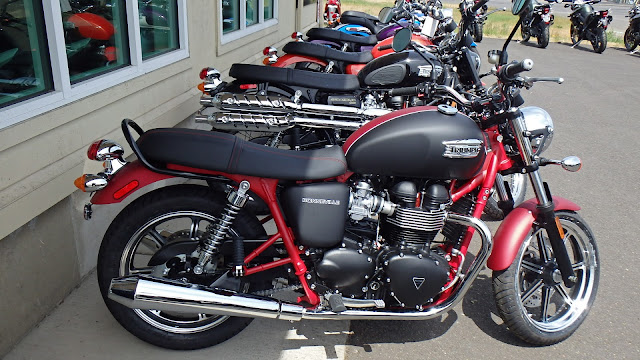 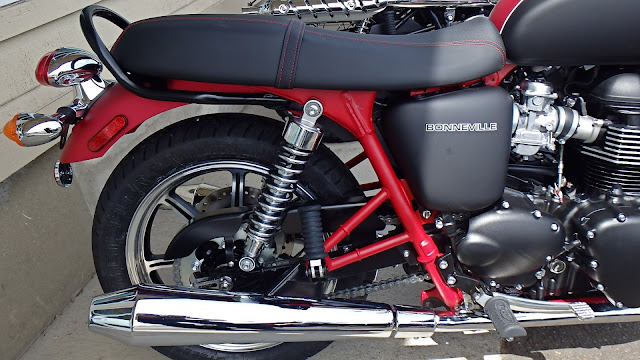 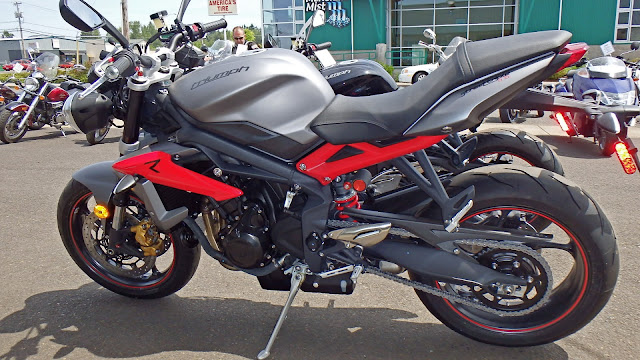 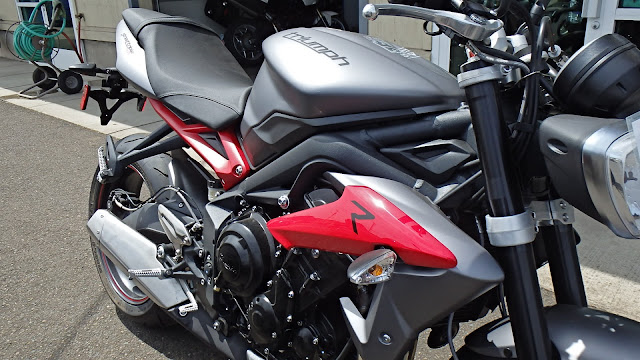 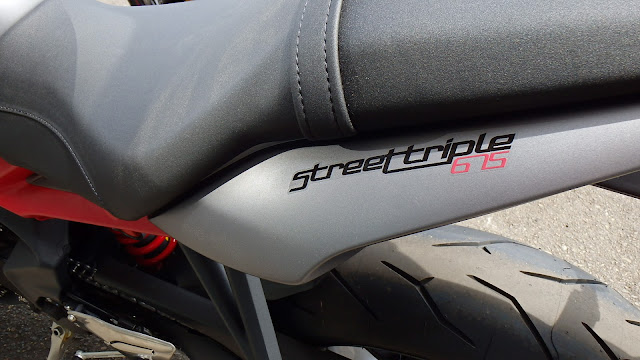 They also had the Street Triple in white with blue accents.  It was inside and jam packed against other bikes so I couldn't get any pictures.  There were other bikes to be ogled outside with different color combinations. 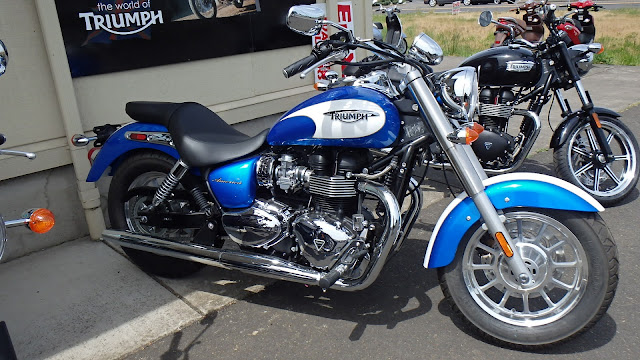 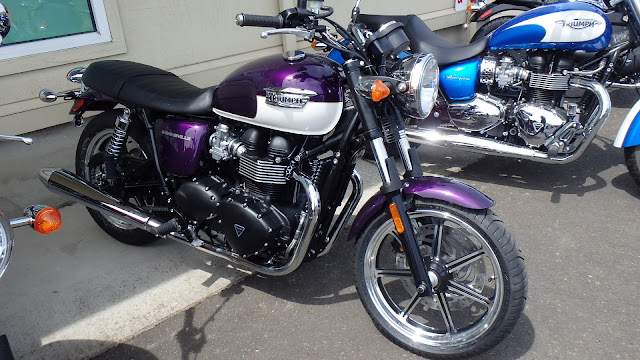 And then something caught Troubadour's eye......  A gently used Tiger 800, fully loaded with only 4400 miles on it.  The Universe was throwing temptation at him. 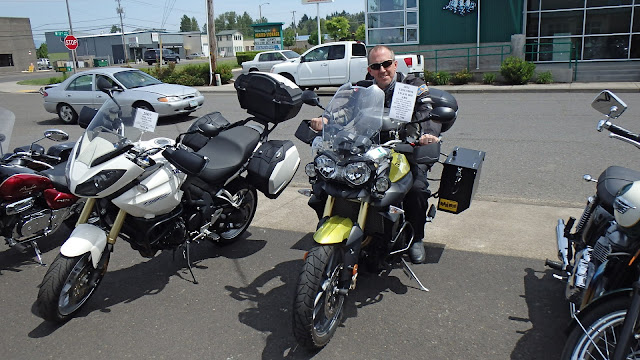 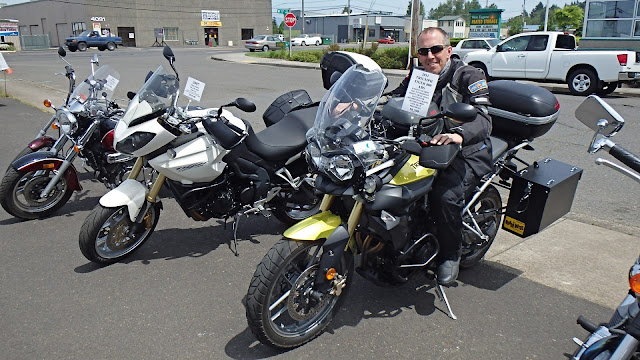 But he resisted.  He decided he already has a Tiger that he loves and left it there for another Triumph fan to purchase.


While wandering around the shop, the clouds cleared completely and the temperature rose even more.  We took the liners out of our jackets and decided an iced cold yummy coffee was in order. We rode down West Eleventh to the newly built Starbucks.  I had a iced vente unsweetened black tea lemonade and Troubadour opted for the iced vente vanilla soy Starbucks Doubleshot. (5 shots of espresso - the XT wasn't the only thing vibrating on the way home) 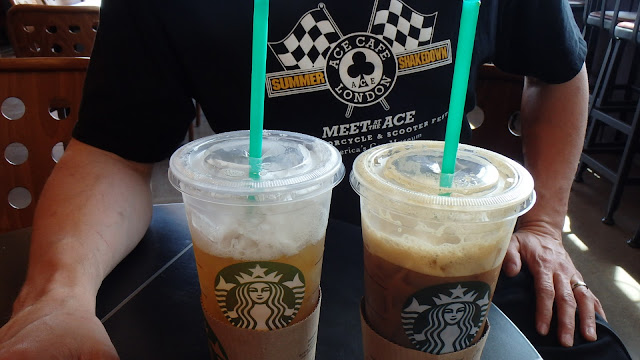 The barista taking our order asked us the standard question: "Aren't you hot in all that gear? " He then proceeded to let us know the Vulcan out back was his and that he rode it everywhere because he doesn't have a car.  Then he told us how odd it felt to be riding in the warm weather in just his shorts, t-shirt and flip flops.  Really dude?  Face palm. I guess he hasn't taken a bee up the shorts yet.

We had one more stop to make before heading home and delivering the rectifier to Donn for installation.

We arrived home just after 4 pm and the thermometer in the back yard indicated it was 89˚F (31.6˚C) in the shade.  Yeah, that would be why we were a little toasty waiting at stop lights on the way home.

Changing into something cooler was the first order of business before making a giant salad for dinner.  And as always, Basil appeared happy to see us.

"  It is a cruel season that makes you get ready for bed while it's light out." - Bill Watterson (Calvin & Hobbes)
.
Posted by Trobairitz at 6:54 AM