We have been experiencing above average temperatures for the last few weeks and Friday was no different.

Josh was in from Denver and schemes were hatched to ride to Sublimity for him to test ride a KTM 690 Duke.  Meg was stuck at work and would be meeting us in Salem for dinner.

The plan was to meet Josh in Lebanon at 1:30 pm.  By this time temperatures had climbed and were into the high 80's low 90's.

It was a fairly warm ride to Lebanon and by the time we left Josh's house the temperatures had risen a little more.  I am not sure how warm the heat waves coming off the asphalt were, but the air was reported to be 95˚F (35˚C).

Josh led us along the back roads of the east side of the valley and before long we were in Sublimity at the dealership.  Power Motorsports is one of the largest motorcycle dealerships in the mid-valley with an extensive selection of new and used inventory.  They have no pressure sales staff and are always up for people taking test rides.

The first thing we did was walk over to the used building and enjoy some air conditioning.  Brad even sat on a used Harley.  He couldn't figure out how someone could do the offset cone weave with ape hangers. 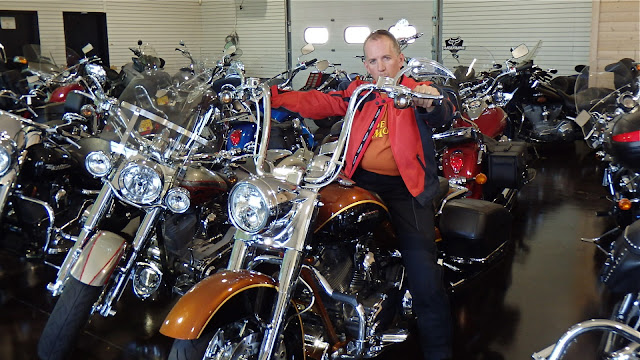 We then walked back to the parking lot, which had a few new and used bikes set up, and then made our way into the building of new bikes which also housed their accessories, sales staff, and parts counter.

Brad took his turn sitting on the Duke while Josh was signing his life away on the waiver to test ride. 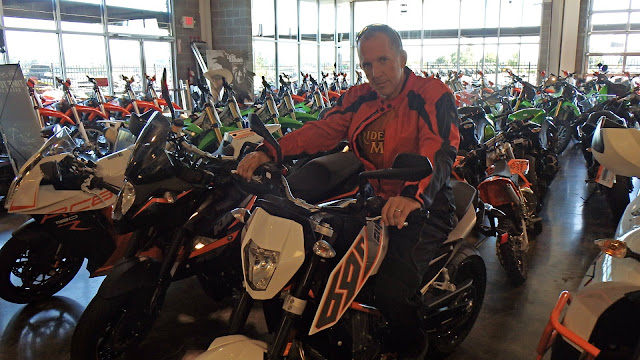 Troubadour on a KTM 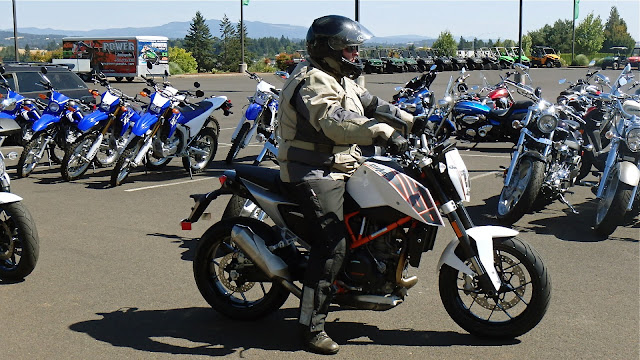 Josh on the KTM 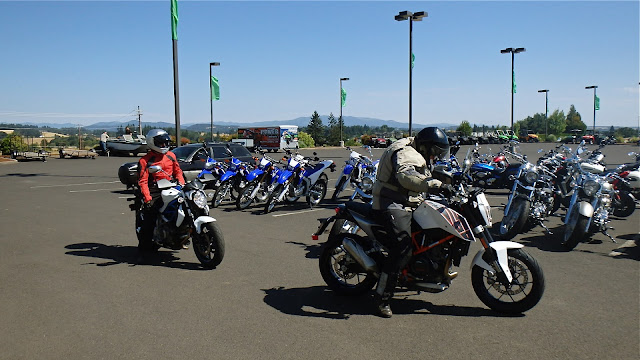 Brad wasn't planning on test riding any bikes but Josh asked him to come along on the test ride so we traded keys and he followed on Max.  Brad's steed of choice for the day was the Yamaha XT250 so Max was better suited for the test ride.

It wasn't a long test ride but it was enough for Josh to get a feel for the bike.  He reported that he really liked it, but the throttle by wire was something to get used to compared to cranking on the throttle cable of his V-Strom.  He was smiling when he got back.  At 330 lbs wet, the KTM is a light nimble bike that begs for hoonin'.

It was still damn hot and about 4 pm by this point.  The guys wandered around looking at bikes generally passing time waiting for Meg to get off work.   We had a 15-18 mile ride into Salem to meet Meg and she had at least double that coming in from Corvallis.  While we waited I chose to sit on a park bench in the shade outside and drink more water.  There was a breeze so it wasn't too bad with the jacket off.

We eventually suited up and headed west.  Did I mention it was hot?  I did manage to figure out that if I leaned way over the tank the vents in the front of my Rev'it jacket worked much better.

We arrived at Marco Polo Global Restaurant and ordered a pitcher of Arnold Palmers (half iced tea half lemonade).  We managed to go through two pitchers by the time we left.  Riding in the heat is thirsty business.

Meg arrived safely and we all ordered.  Normally we order off their Asian menu and the food is excellent.  Friday we chose the veggie burgers and were sorely disappointed.  Good thing they came with a salad.   We did have the samosas as an appetizer and they were tasty.  Next time we'll stick to the vegan wonton soup or something else off the Asian menu.

It was just after 7 pm and we figured we'd best be heading out.  Josh and Meg were riding to the east side of the valley and we were heading back down the west side to Corvallis. 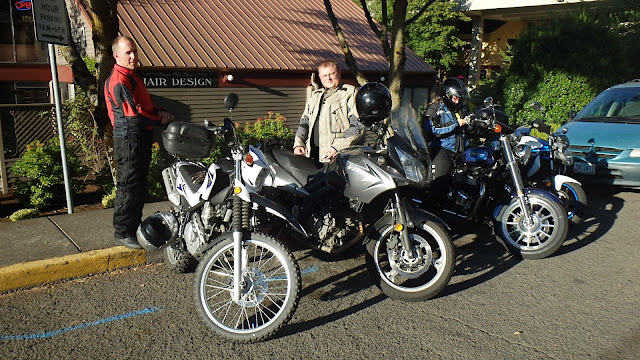 
We took the super secret twisty road towards Corvallis. Colleen - you know which one I mean. Brad pulled over after about 5 miles.  You know it is love when your hubby stops to give you some of the black electrician's tape off his visor to put on yours so you aren't blinded by the setting sun. I haven't bought a tinted visor for my Shoei yet and that sun was bright.

The ride home was a lot cooler and was quite enjoyable.  We arrive home just after 8.  It was a short loop of only 100 miles but an enjoyable afternoon/evening spent with friends.

" A true friend is one who still thinks you are a good egg even if you are half-cracked." - Author Unknown
.
Posted by Trobairitz at 6:50 AM