M stands for motorcycles, but it can also stand for Meh.  And that is exactly what it was last Saturday at the International Motorcycle Show in Seattle - Meh for Motorcycles.

Months ago, or even a few weeks ago, we had no intention of attending the show in Seattle.  We'd attended the one on Abbotsford, BC and figured we didn't need to go to another.  As the weekend approached our local weather forecast was for a lot of rain and high winds so we figured why not. It would give us an opportunity to compare the show in Abbotsford to the show in Seattle back-to-back.

The Seattle show was originally in December, the weekend before Christmas.  This show season they changed it to begin on February 14th, and was the last show of the tour.  We aren't sure if that is why it was so disappointing - thinking the vendors were just tuckered out by the end of the tour.....

Troubadour and I left the house at 8:30 am and listened to the rain fall in buckets the whole way. We finally turned the radio off, it was raining too hard to hear it.  We made a few stops along the way.  In Portland we stopped by Back to Eden Bakery for some black chai tea lattes with hazelnut milk, breakfast of kale/tomato cashew tarts, and we picked up some tasty treats to go.  We also stopped in Tumwater for petrol and Starbucks.

We arrived in Seattle just before 3 pm and had a late lunch; a vegan Thai Buffet.  Maybe if we had of ordered off the menu it might have been better or if we arrived a little earlier, but it was certainly nothing to write home about. The problem with being a reasonably good cook is that you get disappointed a lot when eating out.  So without too much fuss we headed to the convention center to the show.

We found underground parking at the show and headed in.  The usual manufacturers all had booths:  Triumph, Suzuki, Kawasaki, Can Am, Yamaha, KTM, BMW, etc.  What was sadly lacking were the vendors.  Of course Progressive Insurance (sponsor of the show) was there and also Allstate Insurance coupled with a booth or two of custom ear plugs, anti-fog products, and rescue tape.  But that was about it.

The highlight of the show was the Sound Rider motorcycle display and the vintage bike display. Here are a few pics.

And the Fugliest Bike Award goes to this homage to the Seattle Seahawks.  It was really hard to look at. 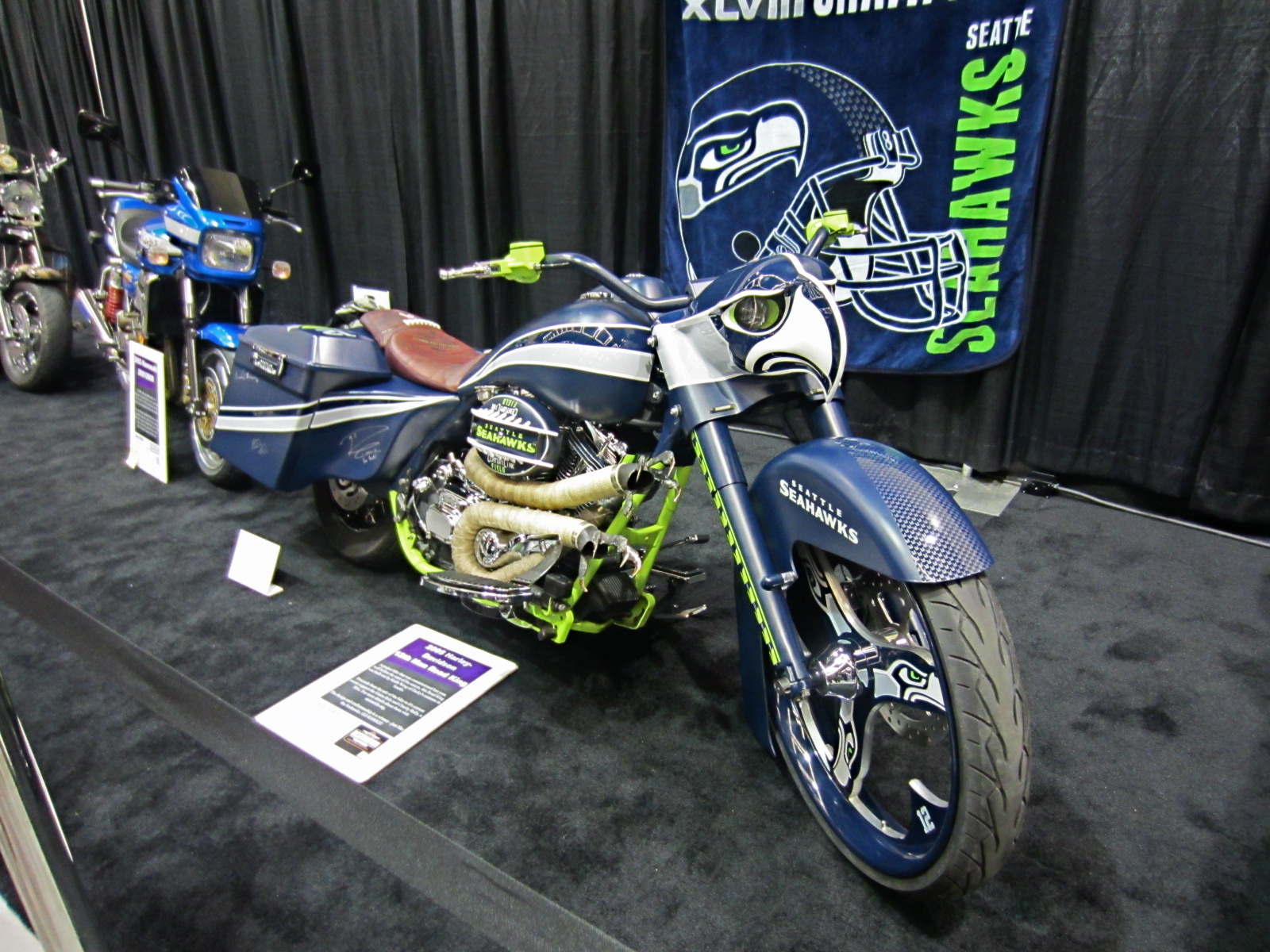 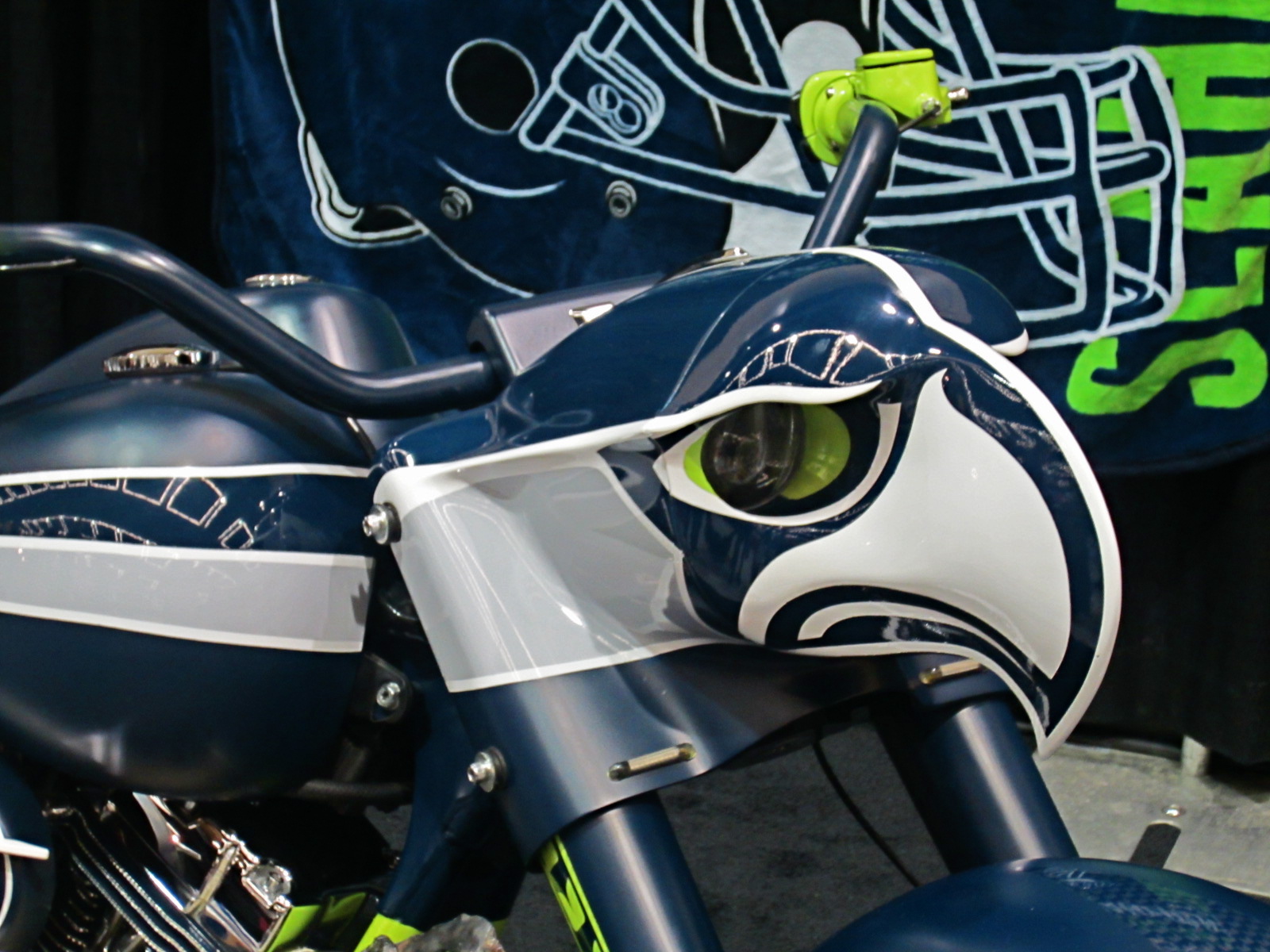 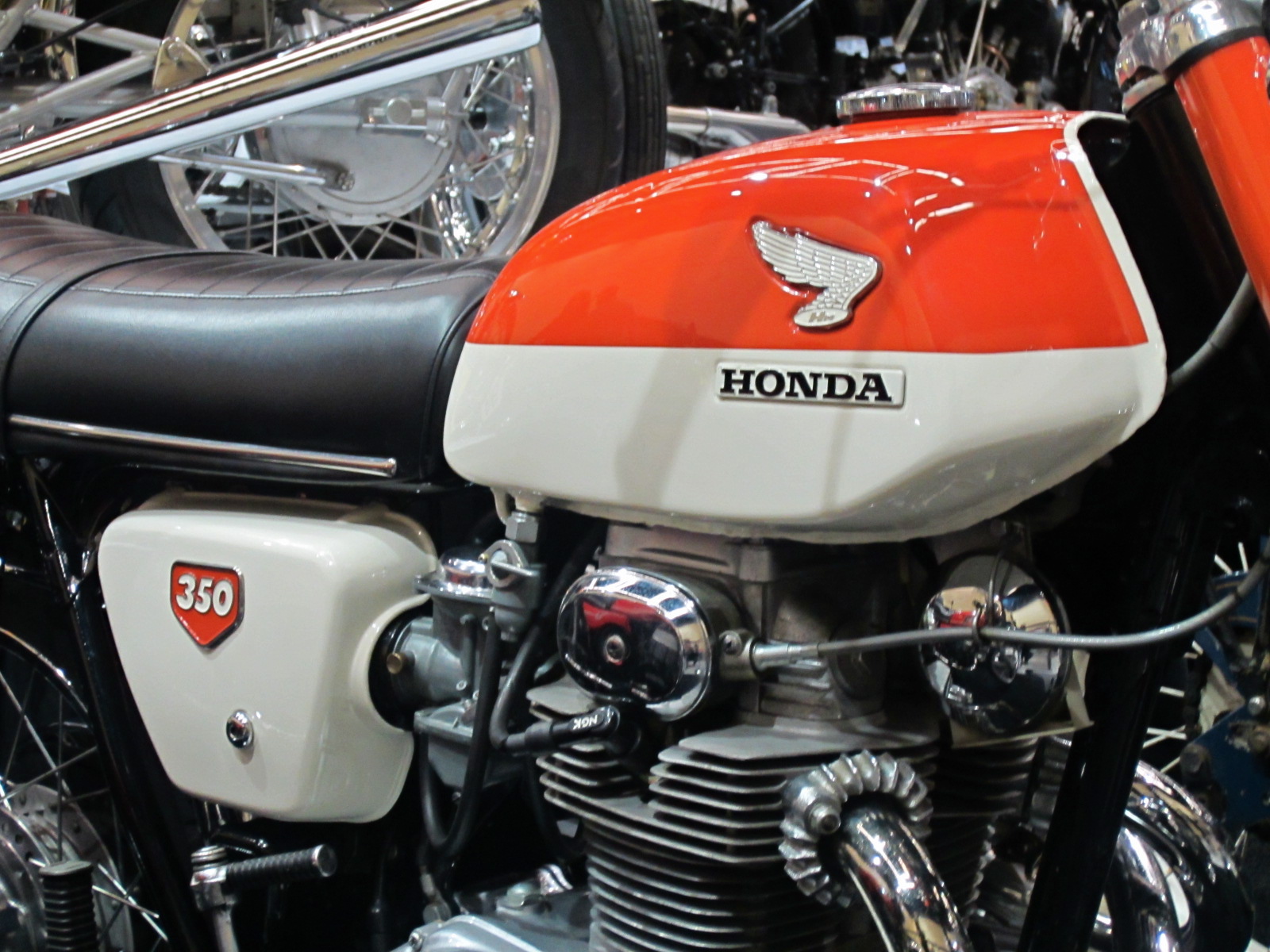 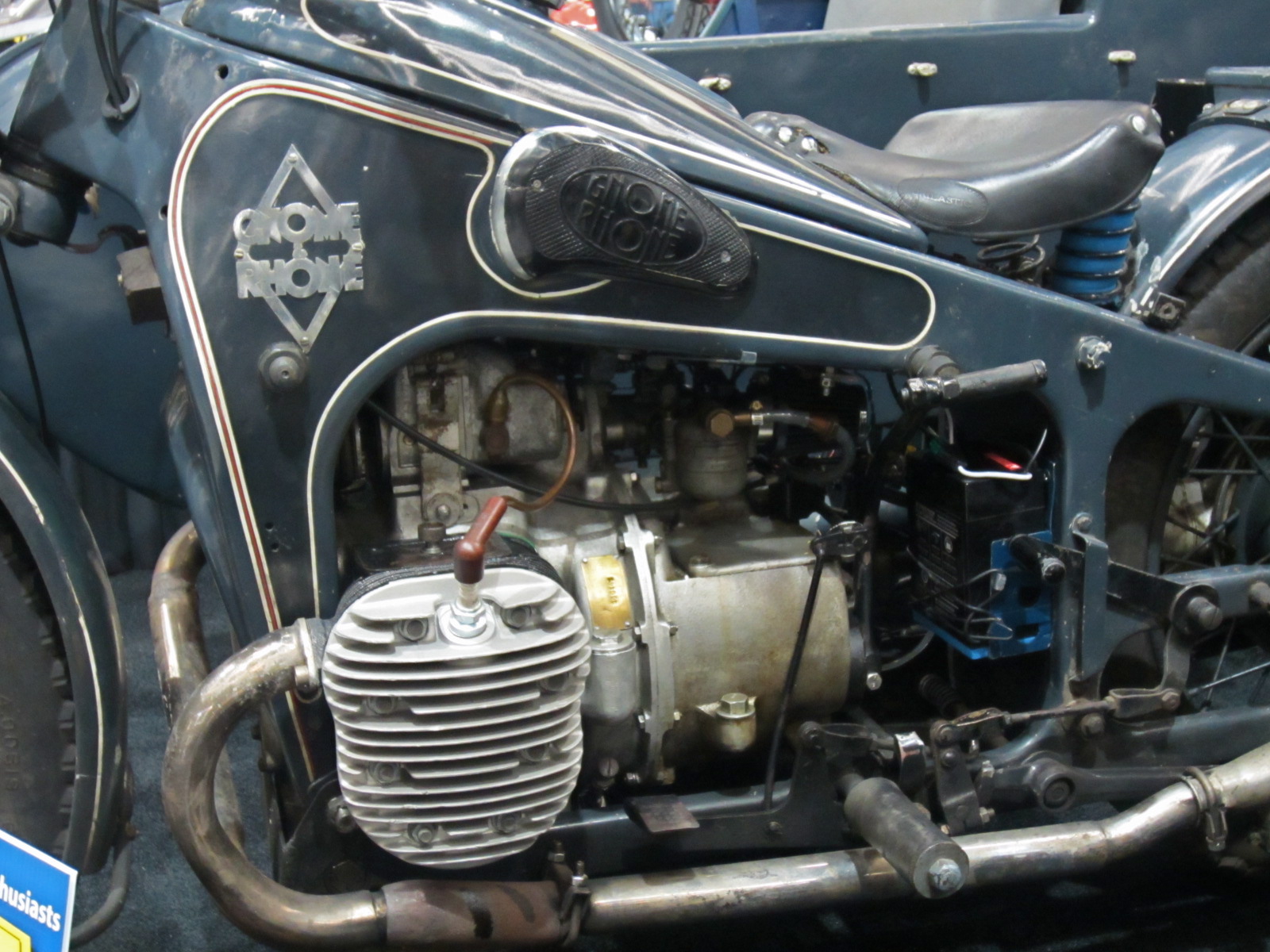 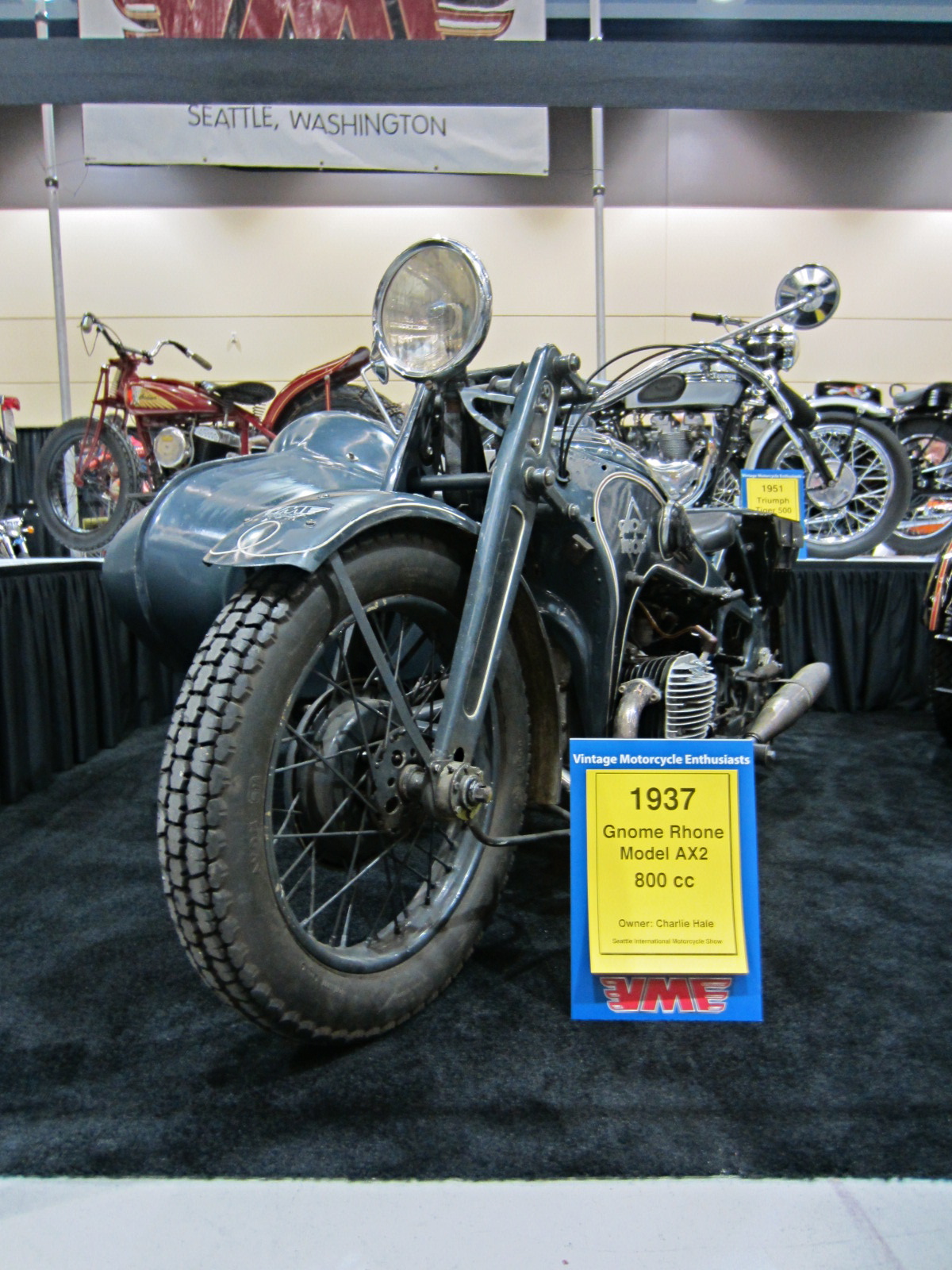 Back out and wandering the floor we saw that Yamaha had another custom Bolt on display, this one customized by Doc's Chops (soon to be Hageman Motorcycles).  Now doesn't it look like it would be fun to ride? 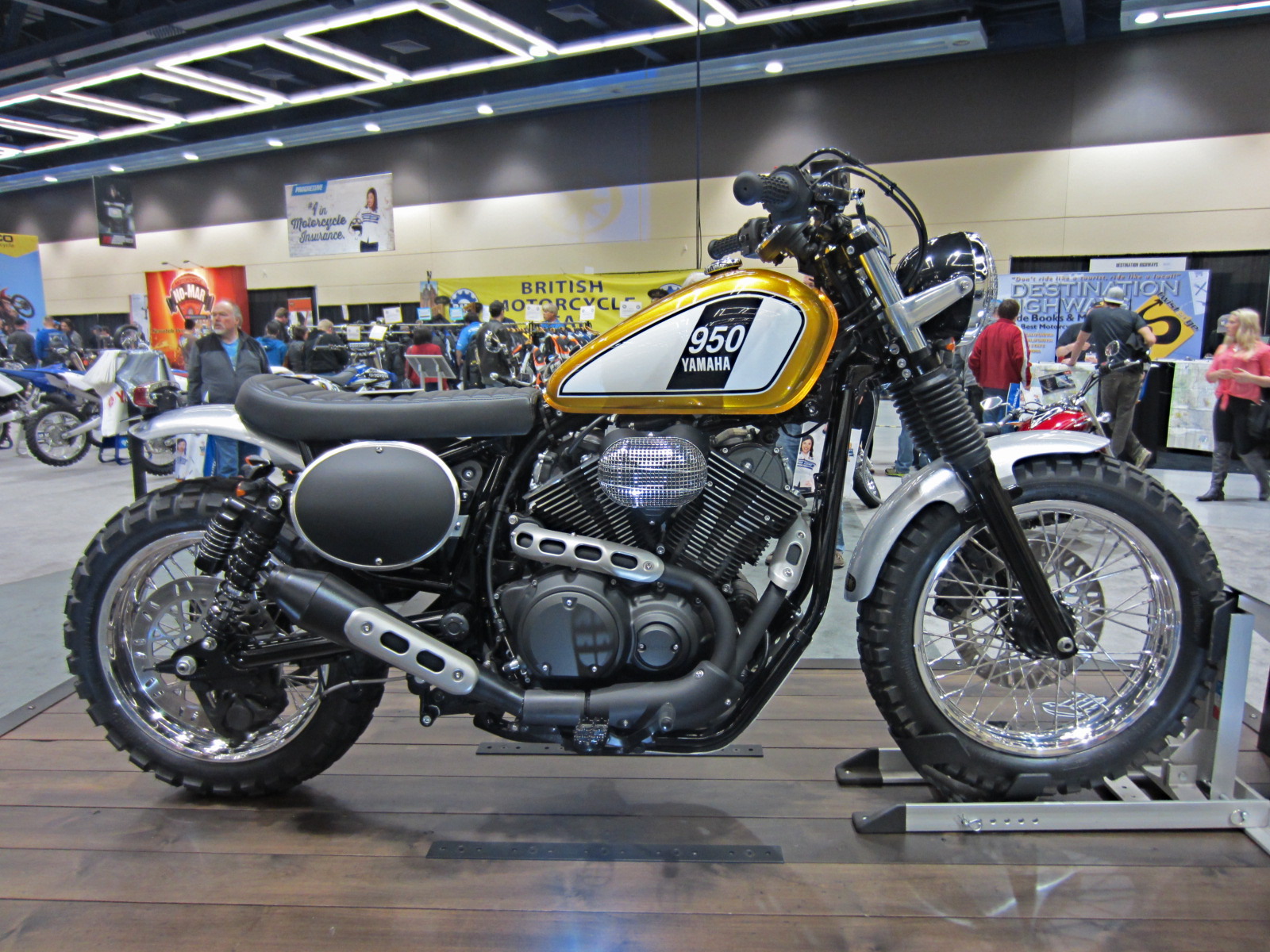 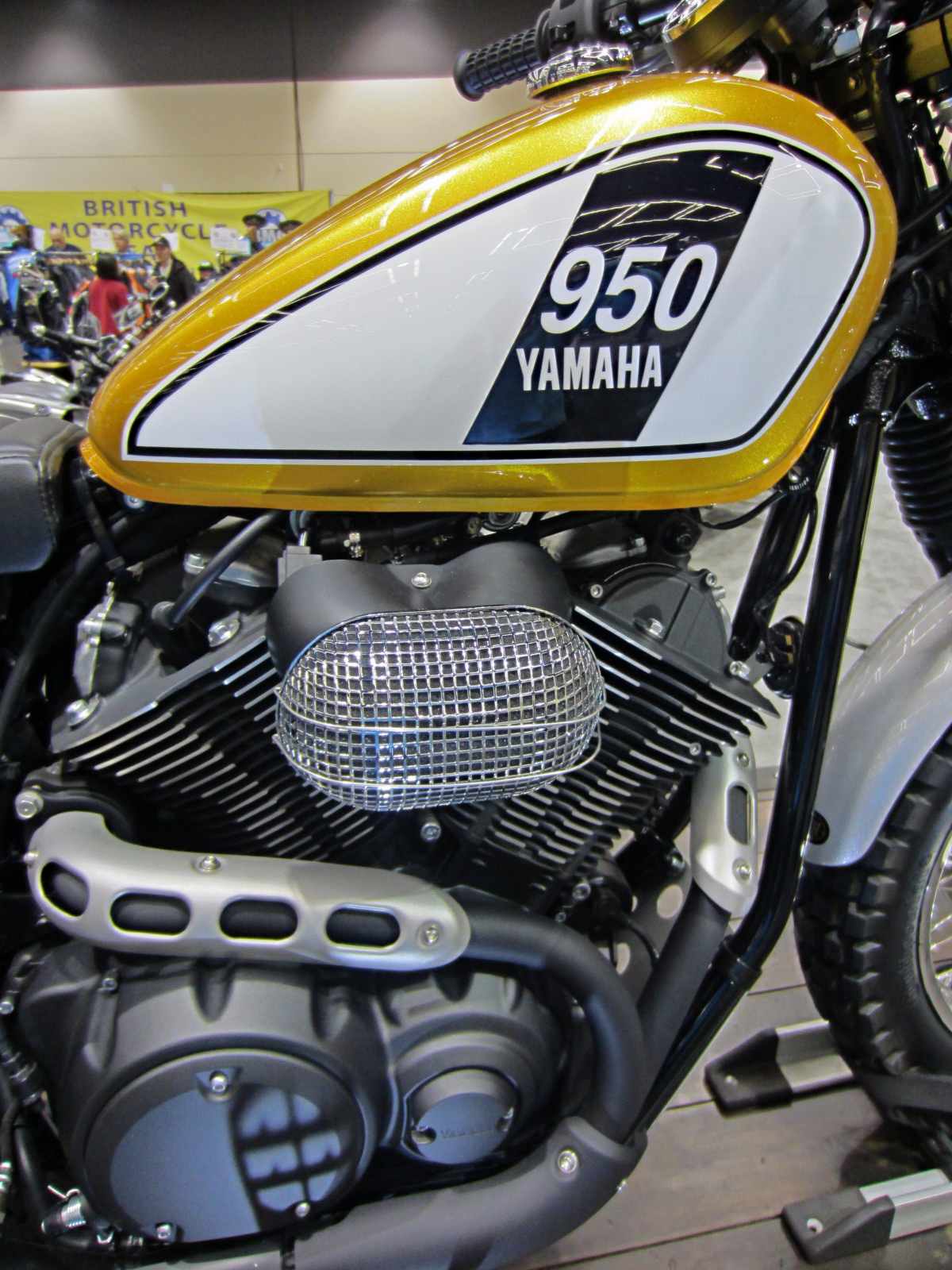 Triumph also had a custom Scrambler that had been thoroughly enjoyed in the wild, as well as a few flat trackers and Latus Motors Thruxton customized for the salt flats.  They also had one of Elena Myers' Daytona 675R, but I didn't get a picture of it.  Quite a few people around it. 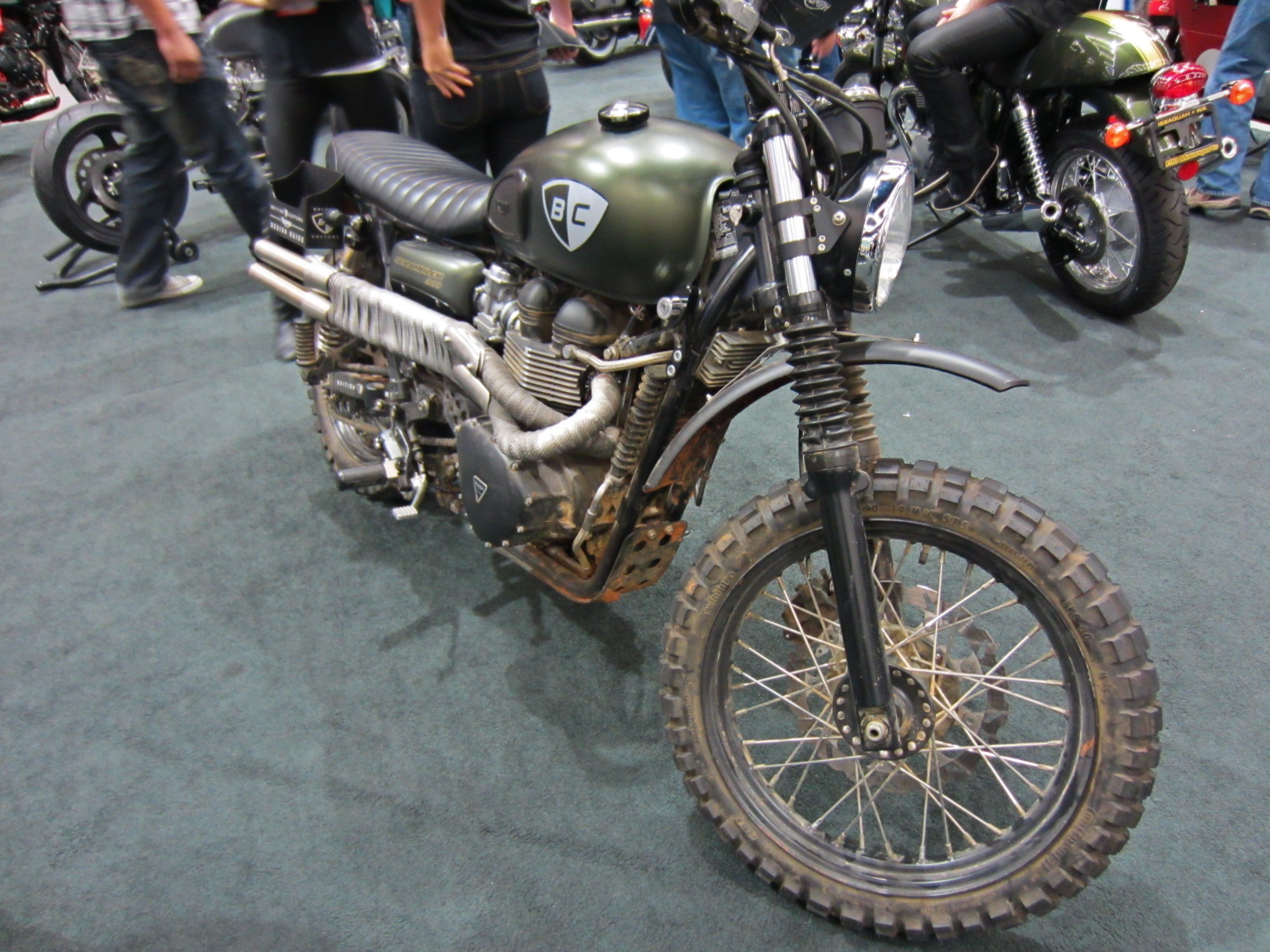 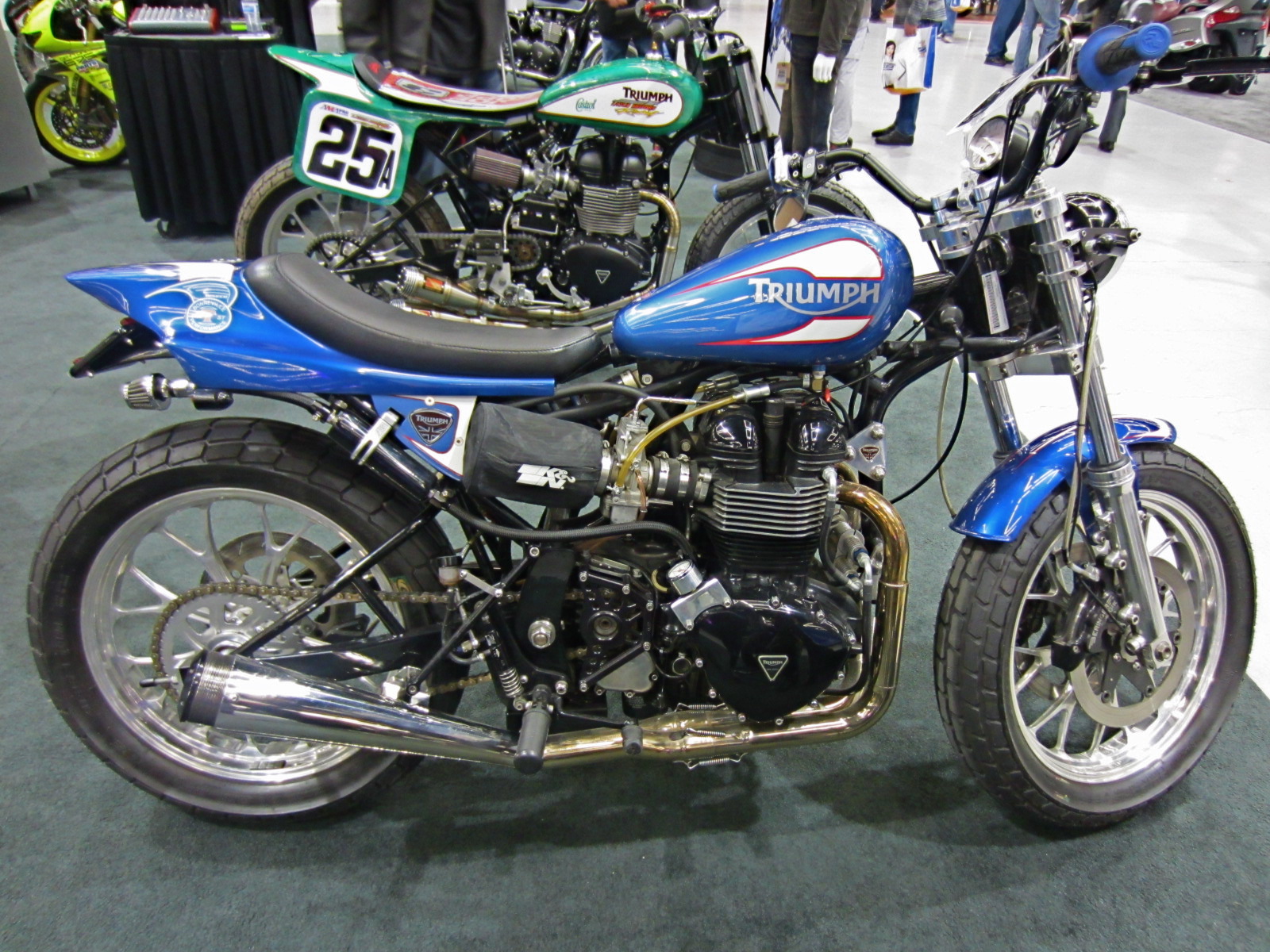 The show was spread out (I think, to try and make it look larger) over two room at the convention center and were connected by a pedestrian walkway over Pike Street with the Pike Street Market in the background.  Here is my one non-moto photo taken that day. 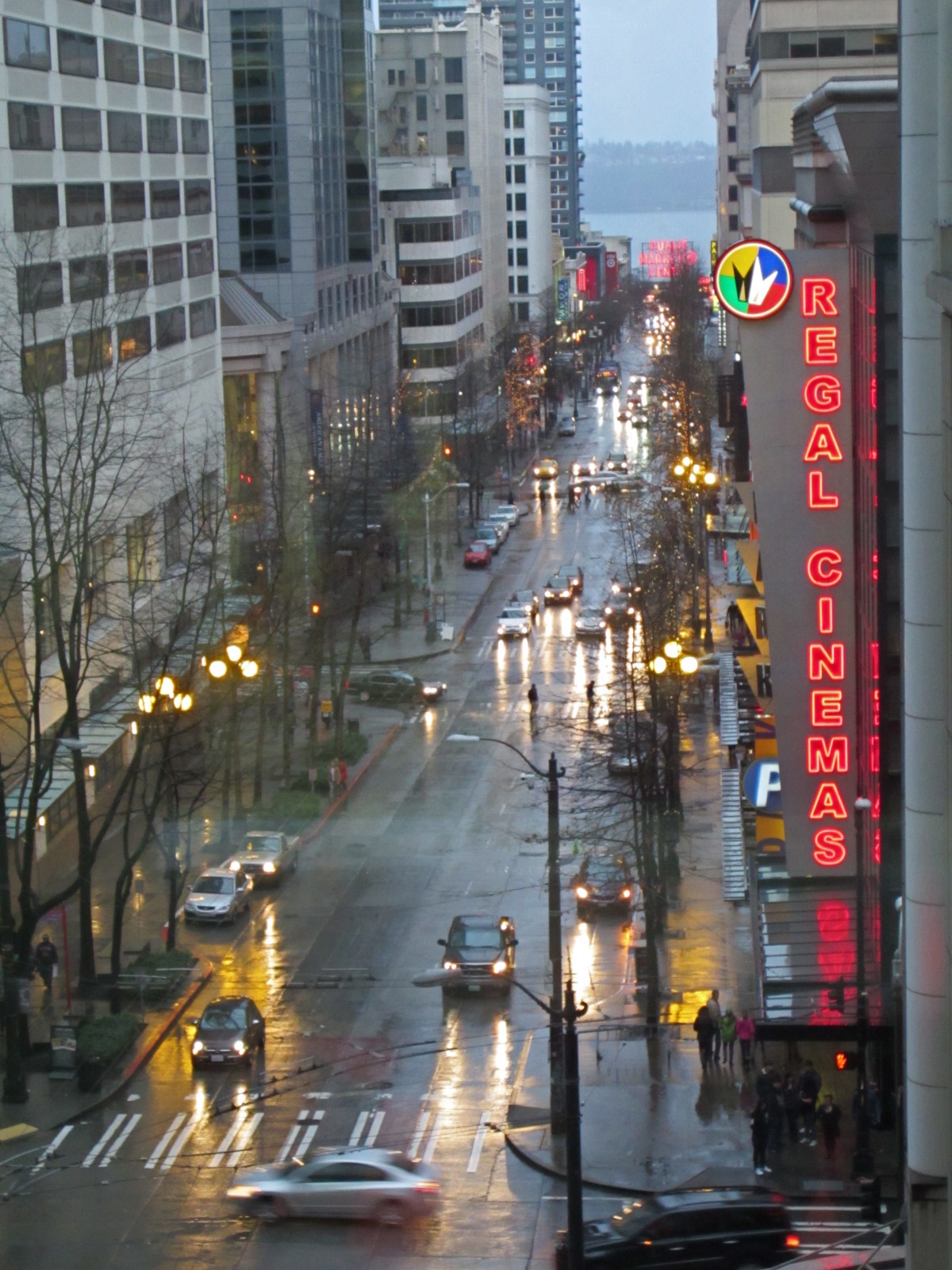 We left the show after wandering for just 90 minutes or so.  A far cry from the 7 hours at the Abbotsford one.  Because of the location at the convention center, the Seattle show did not include any stunt shows or trials demonstrations.  How sad.

We had a bit of a drive to our hotel in Sea-Tac so we decided to forego dinner and had the leftover bakery items in our hotel, and watched something on the telly.

After a crappy night's sleep with high winds and sirens we headed home just after 8 am on Sunday morning.  Luckily we had mostly sunny skies, that is until we crossed over into Oregon and the rains started again.

I think this might have been our last Seattle Motorcycle Show.  We've gone to the last 5 in a row and are pretty much bored with them now.  The question is - do we go to next years Abbotsford show or just let it marinate for a year or two then go again?

" We all need empty hours in our lives or we will have no time to create or dream." - Robert Coles
.
Posted by Trobairitz at 8:28 AM