I was fortunate to have last Friday off.  After getting some chores done we went for a short mountain bike ride.  It was a little later than we anticipated so it was quite short.

Just over two weeks ago Troubadour found a great deal on a dedicated mountain bike for me (so I don't have to use the hybrid on single track) and we ordered it from REI.  40% off a 2014 Novara Madrona, we figured we couldn't go wrong.  A week ago last Friday we drove to Eugene to pick it up. It was as nice as we'd hoped.  27 speeds, 29 inch wheels, hydraulic disk brakes, and it is backed by REI's one year 'love it or return it' guarantee.

I think hubby got it figured out I'd need something besides the hybrid to willingly follow him down the primrose path single track trails without maiming myself.

Last Friday happened to be our first chance to take it out for a shake down ride.  Raise the seat further, adjust the grips a bit, and off we go.

We chose the Vineyard Mountain Loop at the Lewisburg Saddle north of town.  We've previously ridden out there so we knew what we were getting into.  Just a gravel road to start off.  Bluekat has been out there recently too.

Because of our late start and encroaching darkness, we didn't have time for the full loop.  We figured to ride for an hour and turn around and head back to the car.  It was all uphill until the turn around point.

We did stop for a few pictures along the way.  The sun even came out for a short spell.

Further up the road we spotted a bit of sunshine coming through the trees and stopped for a bit. 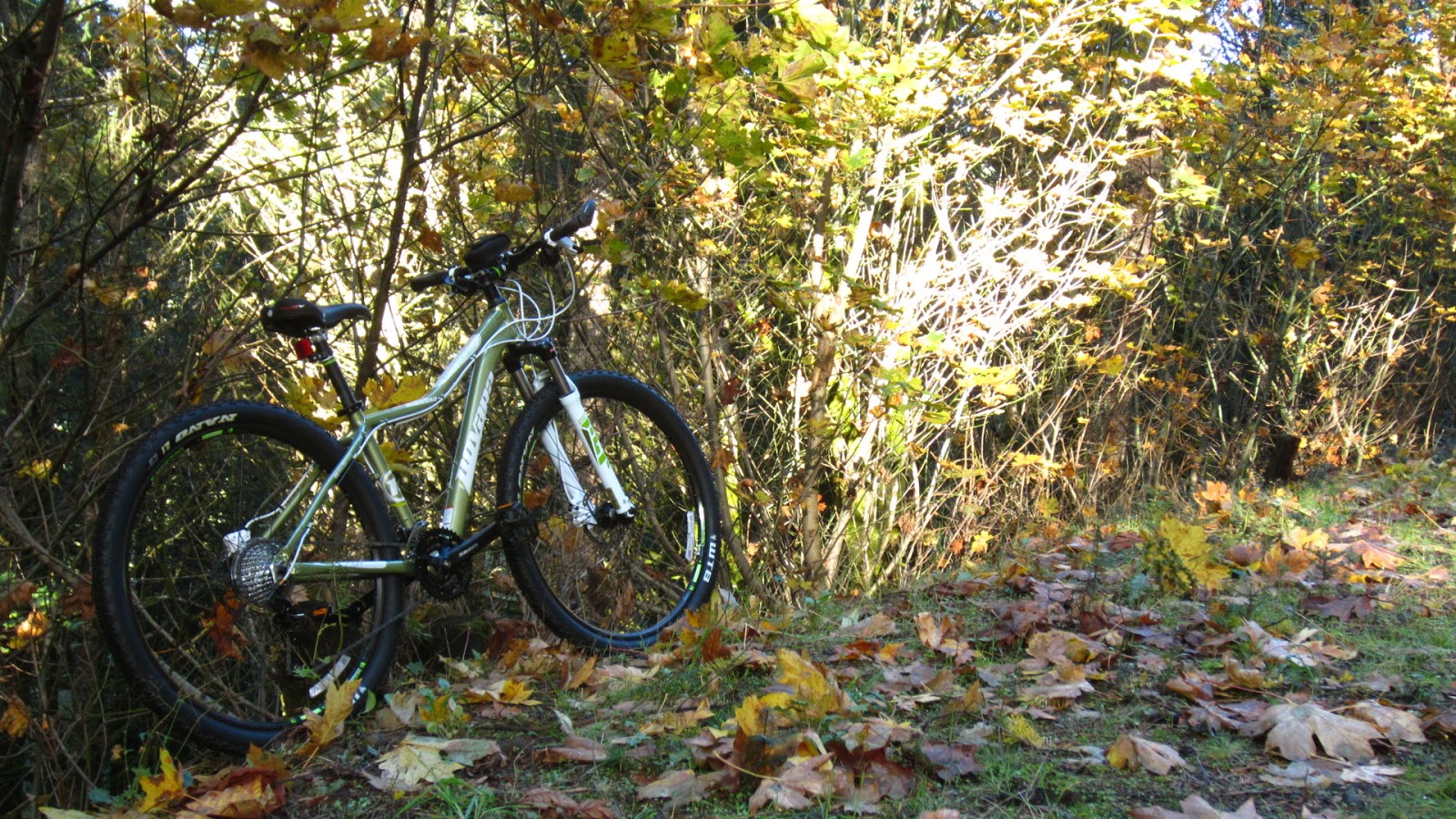 The sun through the trees made the leaves look bright. 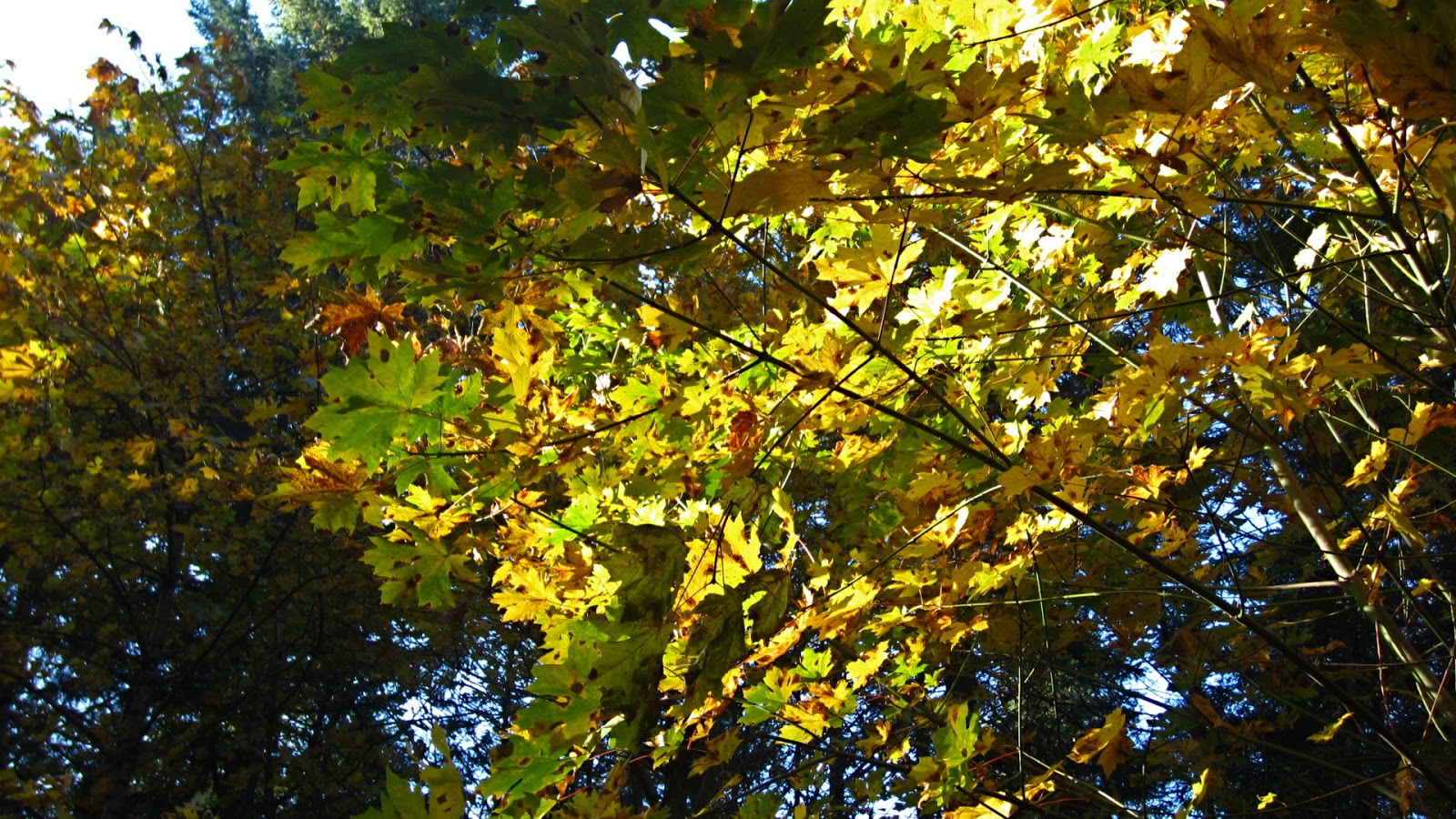 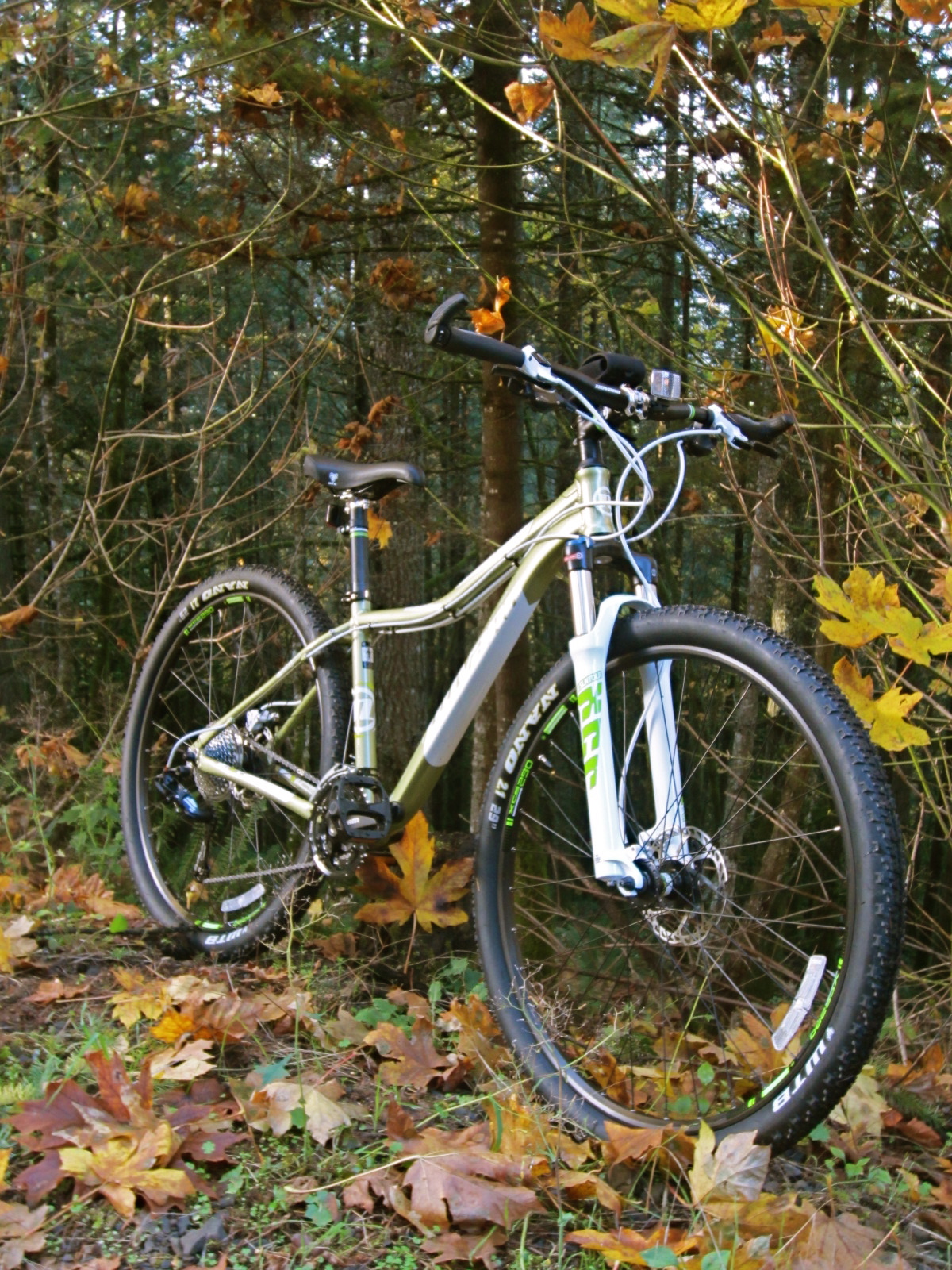 A little further up the hill we stopped at a fork in the road. 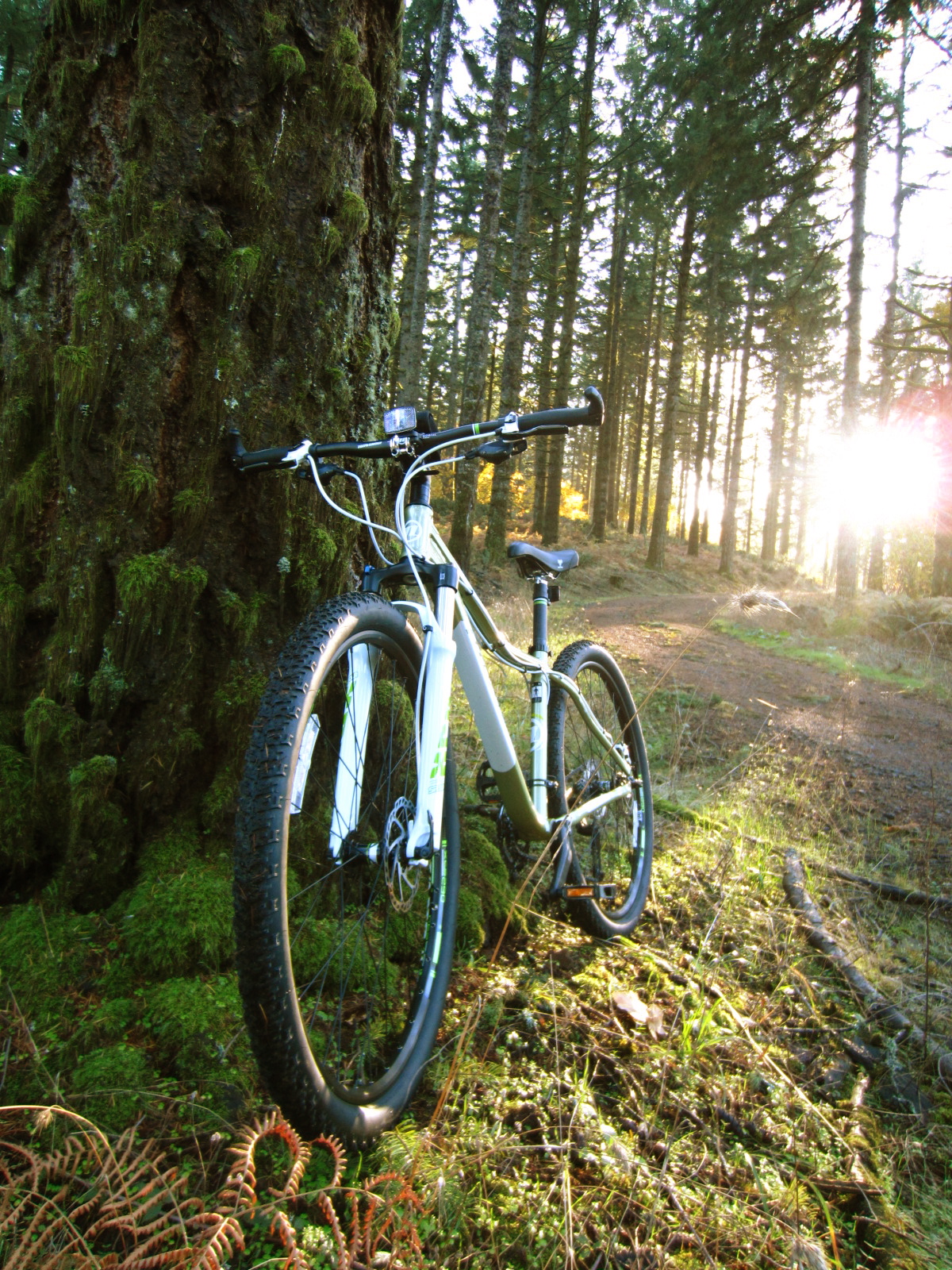 And a little further up we climbed. 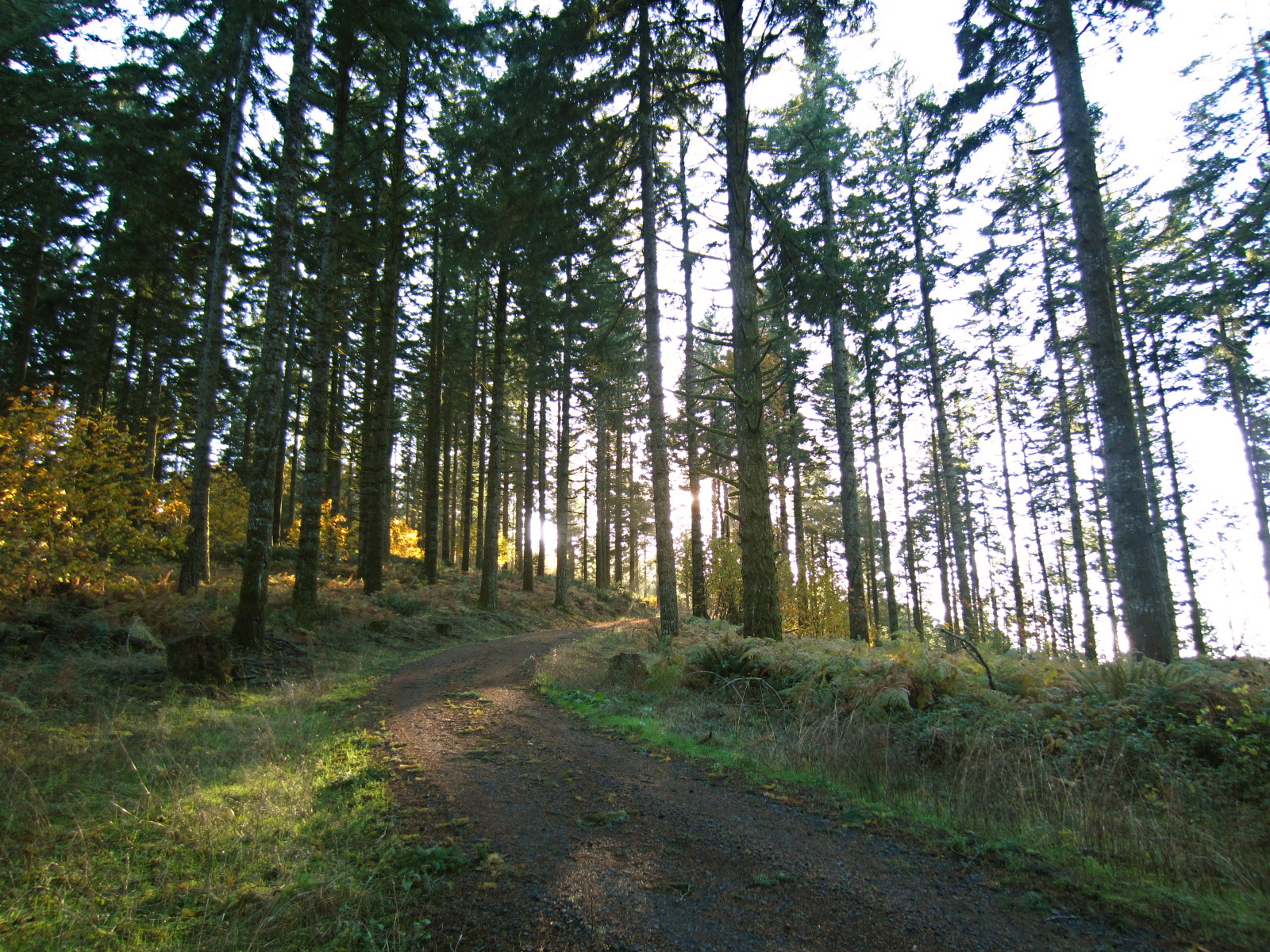 We rode almost to the end of a spur road.  There were buildings ahead and we decided not to get too close - not knowing if they were private or research related.

But.... we found more sunshine.


We used this as our turn around point and it was all downhill back to the car.  While pedaling uphill kept us warm, the downhill ride was a wee bit chilly.  Even with gloves on my hands were cold by the time we got to the car. The thermometer in the car indicated 47˚F (8.3˚C)

We arrived home about 4:30 pm with about 30 minutes to spare before dark.

The main difference between the new bike and my hybrid is that the seat on the new bike is a little smaller and not quite as soft.  The brakes however, are much better for a controlled descent.  I did find it odd that there are no gear indicators on the new bike, but it didn't seem to matter much.  Is it too hard to pedal - shift.  Are you pedaling too fast without getting anywhere - shift.

Did I mention that uphill seems to be easier too?  More riding and less walking, hooray!

Saturday we drove to coffee in the heavy fog, then went home to get ready for the Team Oregon annual banquet in Salem.  It was a late night for us.

Sunday, was at one time, forecast to be dry and sunny.  Somehow that changed (as it usually does in Oregon) and the day dawned grey and drizzly.  Instead of taking the bicycles or motorcycles out we stayed in and did some honey-do projects.  Troubadour finished the back gate and also made a bike rack for the spare room to house the bicycles. He's crafty that way.  I tidied the house and baked some yummy squares - it's what I do. (recipe on the food blog next Thursday)

" Life is like riding a bicycle. To keep your balance, you must keep moving." - Albert Einstein
.
Posted by Trobairitz at 2:48 PM