Last Friday Troubadour and I both had the day off so we decided to take the little Fiat for a drive to the beach.  While we woke to below freezing temperatures in the valley, the coast was forecast to see a higher daytime high temperature than the valley.

We headed west through Philomath, then turned south onto Highway 34 to Waldport.  Our preferred route since Highway 20 to the north is a lot busier with truck and RV traffic. 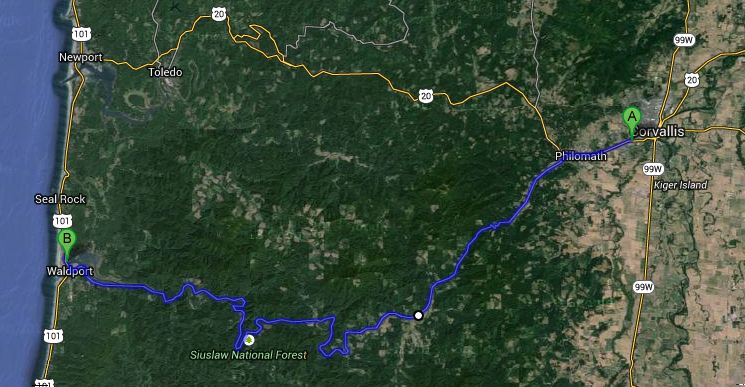 Parts of the road had yet to see the sun and were covered in frost.  We saw 3 cars in the ditch, two of which were upside down on their roofs.  Change in color change in texture people. We slowed to lend assistance but were waived by.  Hopefully no one was hurt.

At Waldport we turned south on Highway 101 to Yachats.  The private Investigator we use for work recommended a vegan friendly cafe in Yachats called The Green Salmon.  We were intrigued.  It is usually hard to find anything but seafood or fast food when at the coast.

The cafe was super busy but the line was moving quickly.  We ordered a Tempeh Reuben Sandwich and a Gardein 'Chicken' Sesame Wrap and shared half of each.  Service was quick, but the place was loud.  We would have sat outside if we didn't think the cigarette smokers would bother us.  In Oregon we have a Smokefree Workplace Law, which means no smoking inside a restaurant, pub, mall, any store really, so smokers tend to move outside to the patio seating.

Sufficiently stuffed we headed further south on Hwy 101 to the Ocean Beach Picnic area.  A nice beach access spot to soak up some sunshine and maybe fly a kite. It is a lesser known beach access that most tourists miss unless they are looking for it.


The sun was shining brightly and the temperature had risen to 50˚F (10˚C). One thing we noticed upon arrival was the large fog bank moving in from the west.  We wouldn't have long before it blocked out the sun.  Quick, to the beach.

We walked down a short paved path and then a few flights of concrete stairs before arriving on the beach.  South of the beach access path we noticed someone had been creative with drift wood and other found goodies on the beach.

The tide was on its way out which makes for good beach walking and tide pool gazing. One of the things I like about this picnic area are the tide pools around the rocks.  You can usually find multi-colored anemones, mussels and other crustaceans, as well as the occasional baby crab or fish.


As we walked further south we got closer to the Great Blue Heron. 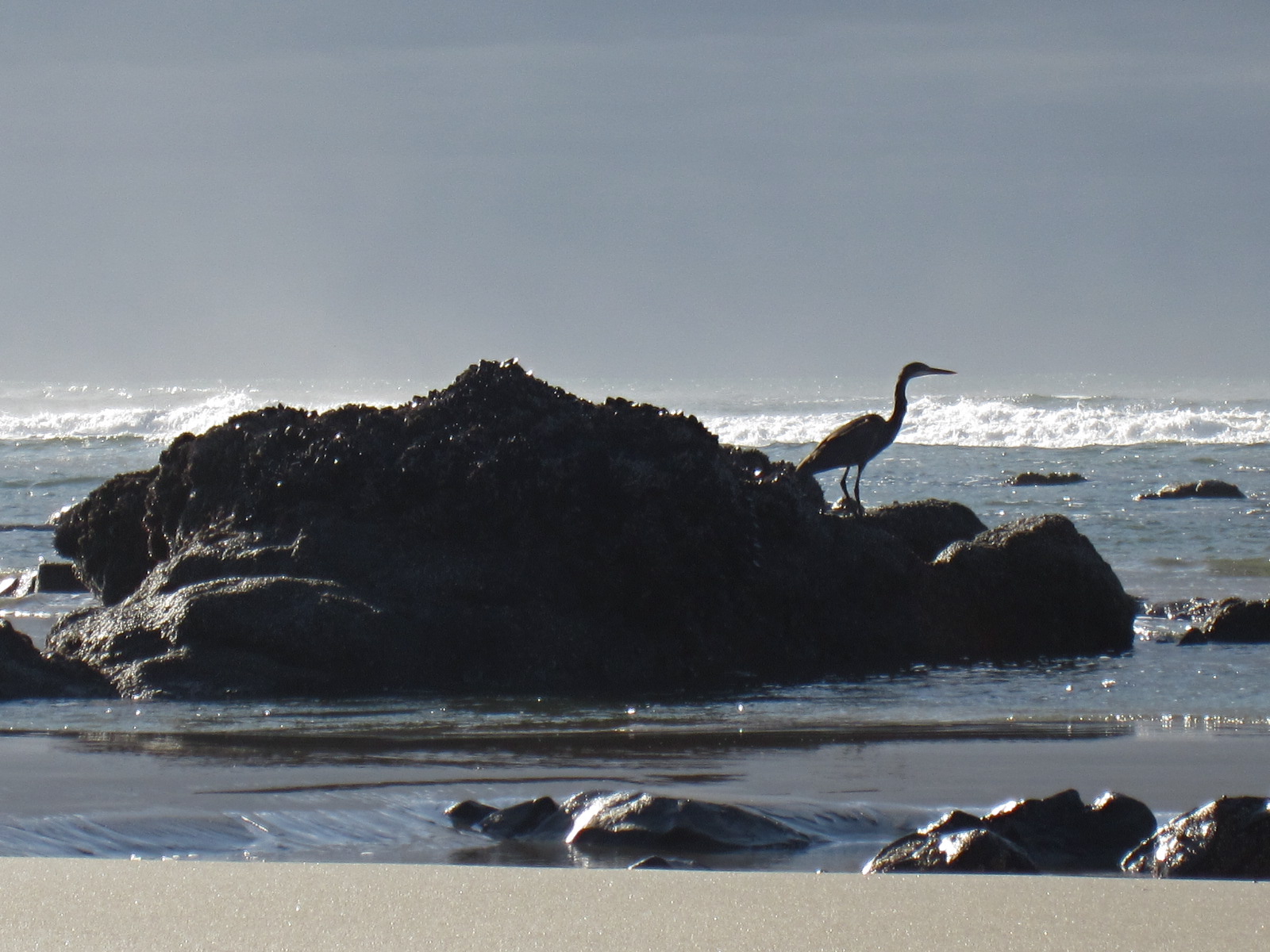 We eventually got too close and he flew off into towards the sun looking like a mini pterodactyl.

When viewing tide pools, even as the tide is going out, one must watch the rogue waves that sneak back upon the beach sometimes closer than the last.

When the sun went behind the cloud bank the wind whipped up and the temperature dropped. It was a quick walk back to the car.

Due to landslide clean-up on Highway 101 to the south, we decided to backtrack North and drive home via Highway 20 at Newport.

On the way, we stopped at the Cape Perpetua Visitor Center. For all the years we've driven by we had never stopped in until last Friday.  There were many hiking trails starting at the visitor center as well as an indoor whale watching viewpoint.  They grey whales are migrating south right now and we were able to see one pod.  Visible to the naked eye, but not a lot of detail and our binoculars were in the car.  We didn't have time to do any hikes, but I am sure we'll be back.

We did manage to acquire a few maps of the area that included trails and off road vehicle areas. We also took home a booklet that lists the parks and trail heads our Northwest Forest Pass is valid for parking in.  Without the pass we would have had to pay $5 to park at the picnic area and $5 at the visitor center.  The pass, at $30 per year seems to be a good deal so far.

By this time we were looking for something hot to drink, but the Green Salmon Cafe in Yachats was closed on the way by.  We drove further north to Newport where we stopped at Starbucks for soy chai tea lattes and then headed home via Highway 20.

We arrived home about 6 pm with temperatures once again hovering about freezing.  We had a good day out even if the sunshine didn't last as long as we'd like.

" Many years ago I resolved never to bother with New Years resolutions, and I've stuck with it ever since." - Dave Beard
.
Posted by Trobairitz at 8:33 AM