Last Friday I scored the day off because my boss was playing hooky and taking his boat out halibut fishing.  It is always nice when he lets me have a Friday off since he knows Troubadour does not work on Fridays.

Thursday night we decided that we wanted to go for a mountain bike ride on Friday since it was going to be warm in the valley and getting above the grass seed pollen might help my allergies. Troubadour left it up to me to decide where we'd ride.  So many choices.

I opted for Silver Falls State Park just outside of Silverton. It is about 55 miles (88 km) northeast and not too bad of a drive if we take the back roads and avoid I-5.

We arrived at noon and found that our Northwest Forest Pass does not cover the State Park. Thank you State of Oregon. So, we proceeded to fill-out an envelope at the self-pay station and donate $5 then placed the receipt on the dashboard of the Subaru to avoid a ticket.  If only they would use that money for signs that actually show you all the trails.  All the signs at the parking lot indicated no bicycles on the trails, but we knew from the paper pamphlet they provided that bikes are allowed on a few of them.

We had to walk the bikes 150 feet or so to where the Perimeter Trail began.  The trail started out gently then steadily increased in grade.

We stopped for Troubadour to drop a pin on his Garmin e Trex so we'd know where we were and how to get back if necessary.  This would also track our elevation changes and distance travelled. It was a good opportunity to take a picture of the trail.

Soon we were on a set of switchbacks leading up the side of the mountain.  There would be a short set of switchbacks, then it would level off a bit, then more switchbacks.  I got hung up on a tree root or something and lost my momentum. I thought it was another good spot for a picture. Troubadour was pedaling on and was already out of sight.  There was a large tree trunk up ahead that looked like the tree had been hit by lightning years ago.

At one point as I was pushing my bike up a particularly steep section trying to hold off an exercise induced asthma attack (I have been reluctant to get an inhaler, but I may have to change that) I mentioned to Troubadour that I had no one to blame for being on that trail but myself.  I picked the damn thing.  Huff, puff, wheeze.  Okay, I can breathe. Time to carry on.

We eventually arrived at an intersection.  I believe it was just over 1,000 feet (304 meters) of elevation gain over the 3.12 miles (5.02 km) to the intersection with a gravel fire road and the rest of the Perimeter Trail that horses are allowed on.  Troubadour can consult to his Garmin and verify the elevation gain. Time for a wee break and to look at the trail signs and evaluate our wounds.  The blackberry bushes were encroaching on the trail and our legs were getting a little scraped on the way by.  Stings a little but you soon forget. 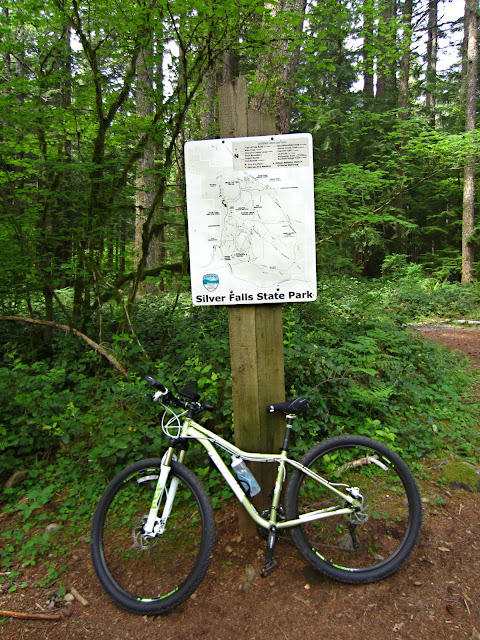 We looked at the trail sign and compared it to the paper map we were carrying and decided to try the next section of trail that was shared with horses.  It was heading downhill so worse-case scenario was we'd have to hike/bike back up it.  Our intention was a 15 mile loop I saw described on the internet.  Perimeter Trail to Buck Mountain Loop, etc so we'd make a loop instead of doing an out and back on the same trail.  We started downhill where the trail looked like the photo below.

The tail started to really get churned up.  Big clods of mud from the horses hooves.  People hadn't been riding their horses at a walking pace, they must have either been galloping or at a really good trot to dig up the trail.  Not so easy to ride over for a mountain biker.  And then we came to this.......

Shortly after this the trail was so bad we turned around.  F*ck it, it wasn't fun any more.  Damn horses, and they say bikes tear up a trail.  I took the pictures above on the return trip.  I held my bike on the left side squeezing it between the log and the tree and walked on the log to avoid most of the mud.  Made for slick shoes on the pedals after.  We back-tracked the 1/2 mile to the intersection and our favorite sign of the day.

Don't get me wrong, I don't hate horses.  I used to ride them in high school.  I just don't like them on the bike trails.

We stopped for a another quick break and split a Cliff Bar.  It had been a long time since breakfast and we'd only had a quick Cliff Bar at the car before setting out.  Energy renewed we pointed our wheels towards the car.

I had one "face palm" moment on return trip.  At one point on the way back, I was heading downhill on a particularly tight/steep right hand switchback and slowed so that I could put my right foot up on the embankment for stability and to assist me around the corner (drop off on other side of trail and I am not a fan of steep switchbacks).  Somehow I managed to lean a bit towards the right, my front tire turned to the right, and I gave my left knee road rash all while keeping forward momentum and the bike upright. I don't think I could do it again, but wish I had it on video it must have looked like I was having a seizure epic.  Troubadour was ahead of me and missed it.  I don't know many people that can give themselves road rash from their front tire while being on the bike.  That takes a special kind of stoopid talent.  It was a 2 inch round spot on my knee - black from the tire and red from taking the skin off a bit.  Not the smartest thing I've done, but I laughed out loud. Troubadour couldn't figure out how the hell I'd done it and even tried to do duplicate after we'd gotten home.  I had to remind him my inseam is also 2 inches longer than his so my knees stick out further, lol.  That is my excuse.

We didn't stop too many times on the way back.  But this caught Troubadours eye.  I've never seen an anthill so large.  Hard to see in the photos but all those black dots are thousands of little ants.  The hill is several feet tall and wide and they actually started crawling up our shoes as we were standing there.  Troubadour took the pics, hard to do while you are stomping your feet to keep the ants away.


Those were the last pictures of the day.  We managed to make it to the car mostly unscathed. Some scratches on the arms and legs from the blackberries and of course my knee.  We were happy to be off the mountain.  It was an interesting trail, but not necessarily worth the drive again.  We think there are better ones closer to home.

We loaded the bikes onto the car. And, while munching on apples, headed off the mountain.  We stopped in Stayton at Starbucks for a Frappuccino treat, figured we'd earned it.  We made it back to Corvallis at 6 pm and stopped at our favorite Vietnamese Baguette restaurant for a Soya Banh Mi.  Asking for no mayo makes it vegan and we always add fresh jalapenos even though it comes with spicy red sauce.  Delicious.

It was a long day but morale was still high.  I am still laughing at my knee, but I have no one to blame but myself.

"It's not the mountain that we conquer but ourselves." - Sir Edmund Hillary
..
Posted by Trobairitz at 8:50 AM