What am I doing out of the kitchen? 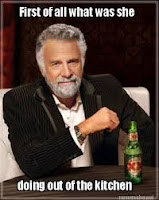 .
"What am I doing out of the kitchen?"  Words spoken by me to Troubadour on our way out of a bicycle shop in Beaverton last Sunday.

As some of you may know from previous posts I have been having issues with my current Novara Madrona mountain bike.  I purchased it from REI last October in a medium frame size with 29 inch tires.  When riding downhill on the trails I manage to rub my knees on the front tire if I happen to come off the seat a bit on corners.  Not good.

After our ride to Siltcoos Lake with PolarBear and family, Troubadour and Polar Bear compared my bike with Troubadour's Trek X-Caliber.  What they found was that the crank for the pedals was several inches closer to the front tire on my bike.  Not ideal when my legs are longer.

One of the benefits of purchasing a bike from REI is that you have a 1-year satisfaction guarantee. I can return or exchange it within 365 days if I am not happy with it.  Skinned knees do not make me happy.

We were told repeatedly that they are between model years so stock was low and that they didn't normally carry many women's mountain bikes anyway.

We've also been to a few different REI stores.  At one time the store at Bridgeport Village had a Cannondale Tango 6 in a tall.  I liked it and it seemed to fit, but it was black with bright pink accents. I am not a fan of bright pink, so we looked some more.

Sunday we decided to head up to REI again.  Troubadour has been thinking of some trekking poles for hiking and we were going to look at bicycles once again.

It was nearing lunch time so we went directly to Veggie Grill in Beaverton.  An all vegan restaurant chain we hadn't been to for a while.  Every time we go I order the same thing though, the Buffalo Bomber sandwich.  Troubadour ordered the Bali Bliss sandwich.  Yumm.  Sorry no pictures, too hungry.  You can take a peek at their menu HERE.

On our way to Veggie Grill we passed two bicycle shops that were open on Sundays.  We made a mental note to stop by after lunch. 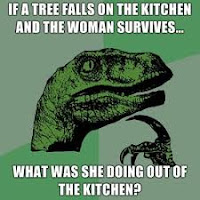 The first one was The Bike Gallery.  Now, a name like Bike Gallery should have been our first clue.  Many bikes on display, cool funky building, etc.  We located the mountain bike section and noticed they only had one ladies hard tail mountain bike on display (Cannondale) and you guessed it, it was not a tall.  A salesman came over to see if he could assist us.  When Troubadour mentioned we were looking for a ladies hardtail mountain bike in a tall frame with hydraulic disk brakes he immediately told us he didn't have any in stock.  He went on to inform us that "Portland isn't big into mountain biking" and "they don't have a big request for women's bikes" and "only 3 out of the last 20 bikes they sold were women's".

He then proceeded to tell us that they were a chain of several stores in the area and we were welcome to go online and check out their stock and what they had in their warehouse and that they could always bring one in from another store or the warehouse for us.

Wait, did he just ask me to do his job for him and look it up online?

We shook our heads in disbelief and on the way out the door is when I mentioned to Troubadour, "what the hell am I doing out of the kitchen anyway?"

After being told that women don't really ride mountain bikes and banging my head against the wall in so many stores it was just what came to mind.  There are jokes out there where the punchline is "I don't know, but what was she doing out of the kitchen?"  Playing on the old joke....


Q:  Why are wedding dresses white?

A:  So they match the appliances

We stopped at one more bike shop before going to REI and that was Santiam Bicycle.  They had one women's mountain bike in stock that was not a tall, but of course they could order something for us.  At least the salesman didn't tell us there wasn't a need for women's mountain bikes, just that they were between model years. He did say he could order anything in the catalogue.  Well if you could order it, don't you think you might want to keep a few in stock during peak season?

Feeling dejected and dragging my feet, we got back in the car and headed to REI in Bridgeport Village.  While they did have one women's Cannondale bicycle in a tall, it was not a mountain bike. A very nice gentleman was assisting us and volunteered to look up the Tango models in their computer to see if they had any in their warehouse, which they could receive rather quickly.  He looked and they had several Cannondale Tango 5's in a tall frame with 27.5" tires.  I ordered it in Magnesium White/Sparkle Silver.  Really?  Do you think they call the silver on a men's bike sparkle silver?  I checked -  men get Gloss White and Berzerker Green.  Sigh.  We get sparkly and they get to go berserk?  Double sigh.

If it comes in and I don't like it for whatever reason, I don't have to take it and we can return my current Novara at the same time.  Not only do I have this guarantee from REI, but the price was less than MSRP, and we get 10% back in dividends.  Not too bad.

WE received an email yesterday morning that the bike is already at the store and assembled.  Now to take the grips and aftermarket seat off the Novara and return it to stock.  We'll pick up the new bike tomorrow (I managed to score the day off since the boss is heading out on the ocean fishing).

We are also thinking of what trails we might be able to ride in that area since we've not been up there with the bicycles before.  Henry Hagg Lake Trail looks interesting.  LINK

Then on Sunday we head to Coos Bay to visit family for the day.  It is about a 2 hour ride/drive. As long as we don't have too much to take with us (food stuff and toys for the nephew) we'll ride down on the motorcycles.  Fingers crossed.

Stay tuned for an update next week.