How can one not be drawn into a hiking area that leads to an abandoned rustic mining camp named Jawbone Flats and wanders through the abandoned site of the Little North Santiam Mining District?

We were intrigued since first hearing about the area some months ago.  On Tuesday September 22nd  Troubadour and I had the opportunity to go explore and enjoyed just under an 8 mile hike/walk in the woods.

According to Oregonhikers.org:
"Jawbone Flats was started some time around 1930 as a mining town. Mining continued in the area until 1992, when the Shiny Rock Mining company donated land in the area to the fledgling Friends of Opal Creek. In 1996, the area surrounding the town became part of the Opal Creek Wilderness and Opal Creek Scenic Recreation Area.

Today the town is run by the same group, now renamed the Opal Creek Ancient Forest Center. The town is being restored as a historic center and outdoor museum of the mining era. The cabins here can be rented."
We left the house taking the trusty Subaru, and an hour and a half later were at the trail head. Our route on the map below.

On the map below you see a close up of the awesome road we took when heading North out of Mehama.  It was called Little North Fork Road.  Beautiful and twisty.  The pavement was perfect, well, all except for the mile or so of gravel where they were repairing the road from a slide.

We arrived at the trail head and were surprised with how many cars were already there on a Tuesday.  We expected less mid week.

We put on our jackets and headed out.  The weather was pleasantly cool and the sky just clearing to brilliant blue.

The way to Jawbone flats is an abandoned/primitive mining road.  Still the original route the miners took back in the day.  A few bridges have been repaired and half bridges added where the roadway gives way to a steep canyon.


We strolled along taking in the fresh air and smells of the forest stopping here and there for photographs.  We were in no hurry.


About 2 miles in we encountered the rusting abandoned machinery of Merten Mill.  The mill was operated for a brief period of time during the Depression. They used two winches from the battleship USS Oregon, but the mill folded after two of the lumber trucks fell off the narrow canyon road.  All artifacts of the mill are protected by federal law.

"Originally Merten Mills produced lumber for the Amalgamated Mines.  Lumber was also transported to a lumber company in Lyons, Oregon.  Remnants of equipment used in the sawmill are on site and include two steam driven capstans salvaged from the battleship Oregon, the original steam boiler, tracks, wheels, axle assemblies, and log carriage." 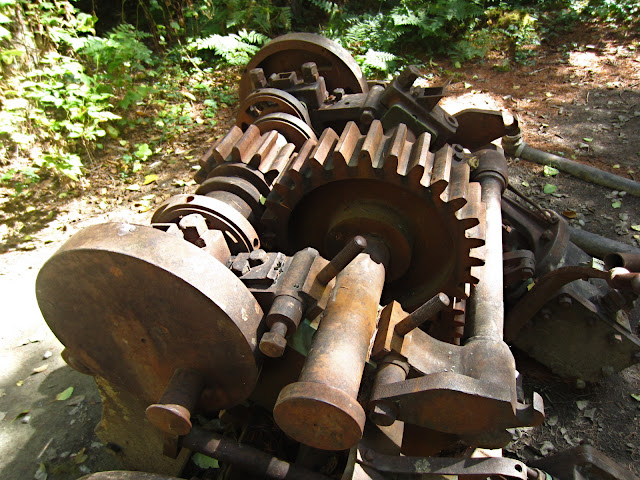 Another 0.2 miles and we came to a fork in the road.  The right fork would lead over a 100 foot bridge to a trail or the left fork, which would stay on the road to Jawbone Flats.  We peeked at the bridge and then took the road. 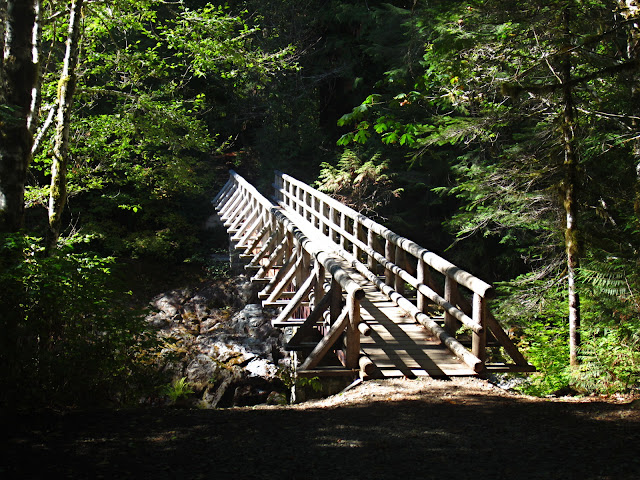 A little further and we officially entered Jawbone Flats; home to 12 residents during the summer that work at the camp. 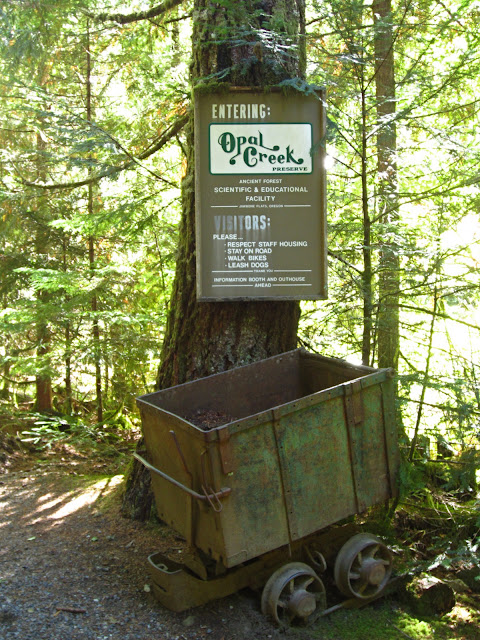 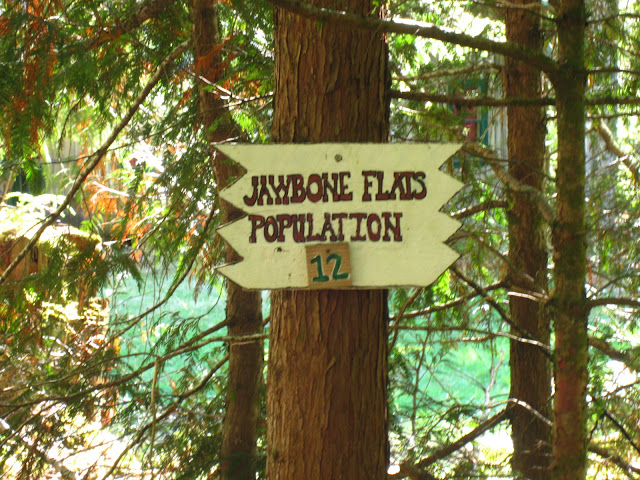 "The most ambition development of the Little North Santiam Mining District began in 1930 by the Amalgamated Mining and Milling Company led by James Hewitt.  Between 1930-1934 the company employed a crew of about 70 men who constructed and lived in Jawbone Flats and Upper Ruth Camp and built four miles of road, an ore mill, a log dam, a flume line, and a sawmill that processed 20 acres of timber supply lumber for these products."


As we walked through Jawbone Flats the signs said to cross the bridge, walk beyond the Pelton Shed Building then turn right and walk through the meadow. "Jawbone flats is off the grid so they are not connected to any municipal water supply.  Inside the shed is a Pelton Wheel, invented in 1870's to convert rushing water into electricity."


We walked by the shed and made the right turn and this is where things got interesting. Before we could get to the meadow we encountered a graveyard of all things steel.

This was just a few of the many items that had been abandoned.  If Jawbone didn't give off such a weird non-welcoming vibe we might have hung around and explored a little longer.  As it was, not one person said hello while we were there.  It was just odd. We were hoping to find a nice spot to have our picnic lunch, but someone had music blaring so we pressed on.

We were glad we did.  Along a little trail we came to Opal Pool.  There wasn't much of a pool after the dry summer we've had, but there was a neat bridge and a log with a view for dining.

After finishing our lunch and talking to the chipmunk, we decided we'd follow the forest trail instead of heading back towards the gravel road and Jawbone Flats.  We knew if we kept the river on our right we'd be heading the right direction.  We were pretty sure the trail would end up back at the fork in the road with the bridge a mere 2.2 miles from the trail head.

There were even several campsites nestled amongst the trees.  Quite a hike to pack your things in and out though.

We saw one large fungus on a tree along the trail.  And one small fungus of a different type along the ground.

The further we walked the more intrigued we were by the scenery.


We arrive at the bridge by the road.  At least our navigation skills aren't lacking.  The lighting was different by this time of the afternoon. The sun was lower in the sky.


From here we took the gravel road the 2.2 miles back to the car.  Along the way we realized how much of a difference there was in walking on the gravel as opposed to the spongy forest trail.  We much preferred the trail, as did our feet, knees, and hips.

It was close to 5 pm when the car came into view.  We took a quick break and headed down the mountain.  We went out for dinner when we got back into town and didn't get home until close to 8 pm.

It was nice to get out and hike for a few hours and see some history at the same time.

" Climb the mountains and get their good tidings.  Nature's peace will flow into you as sunshine flows into trees.  The winds will blow their own freshness into you, and the storms their energy, while cares will drop off like autumn leaves.  As age comes on, one source of enjoyment after another is closed, but Nature's sources never fail." - John Muir
.
Posted by Trobairitz at 8:39 AM