Out with the old, in with the new

.
It has been a busy week or so for Troubadour and I. We decided to sell my little Nighthawk as it was just too small and buzzy or shaky at highway speed. Troubadour had ridden it to work a few times and understood what I meant. I don't think it was as bad for him as he outweighs me and has more upper body strength. A few rides ago Troubadour was more than nice and let me take his Triumph for a ride when on a long straight stretch of the back roads we travel. I couldn't believe the difference in the two. Like night and day. Before riding the Nighthawk I wasn't confident enough to try his bike. But even after a short distance I didn't really want to go back to the Nighthawk.
Last Tuesday, June 30th, we took the bikes out for an evening ride and I put another 52 miles on the Nighthawk. That pretty much made the decision for me that I would be more comfortable on something a little bigger and more stable. Troubadour is teaching me the fine art of counter-steering and I have the concept down, now just need to try for a smooth execution and a higher speed. That is why we took a longer ride that had lots of curves. No twisties per se, but curves. Troubadour would like me to lean a little more when turning at stop lights and such (and not cut corners) and I think it would be easier on a bike with a smoother throttle. The Nighthawk's is so choppy in first gear. That ride helped with our decision to sell and find something else.
We listed the Nighthawk on craigslist. Luckily after a few days it sold. Troubadour always browses what is for sale on Craigslist under motorcycles and so we had been keeping an eye on what was out there. The hard part was weighing fiscal responsibility with the "oh boy, I have to have it" emotional factor.
We looked at the 2008 Suzuki SV650 but cannot find any dealers with them still in stock in a tri-State area. Cross that off the list. I do like the looks of the Suzuki Gladius but didn't want to pay that much. Ducati Monster? Love it but way too expensive.
We put out a thread on our Pacific Northwest Riders Forum looking for ideas and our friends and bike night buddies did not let us down. We received a lot of friendly advice and ideas and, as always, some good natured ribbing.
I kept going back to one Craigslist ad that I had initially dismissed. A 2006 silver and "flame persimmon red" Kawasaki Ninja 650R. It looked awesome and had the "woohoo" factor I was looking for and from the reviews it was a smaller bike that wouldn't get me into too much trouble. It was lady owned (she wanted a Ducati) and was complete with heated grips, Zero Gravity windscreen, Arrow exhaust, and fender eliminator w/LED tail light - rear signals. 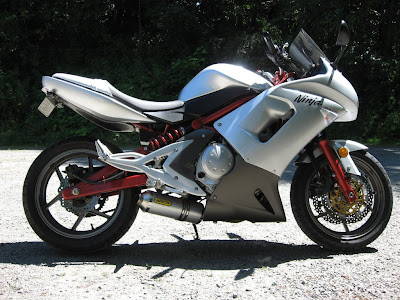 I initially dismissed it as it had a fairing and I thought I wanted naked. Apparently I didn't because I kept going back to it. Troubadour made the call earlier this week and before I knew it we were driving north of Portland after work to take a look. It was in great shape and he took it for a quick ride to check handling and if he thought I would like it. It appeared to be a good size and the seating was a little more upright than most sportier bikes. I sat on it and it seemed a good fit and I can put both feet flat on the ground. We did a little haggling and suddenly Troubadour was riding it home. 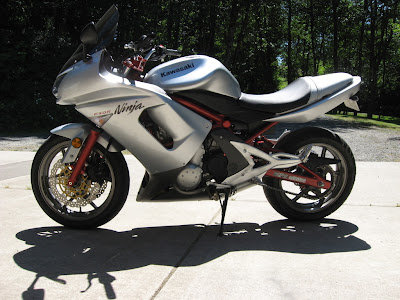 It is a sweet looking little bike. I finally got to take it out for a ride last night and it was great. So much smoother than the Nighthawk. It will take a bit to get used to the brakes and throttle as they are quite different but it will come with practice. I will have to be careful in parking lots and low speeds as it is about 100 lbs heavier than the Nighthawk and gravity can be a bitch. Frame sliders have been recommended more than once (usually with a warning that says "Ask me how I know") so Troubadour already has them on order. I am looking forward to many more rides getting to know the bike and gaining confidence.
Here are a few more pics...... 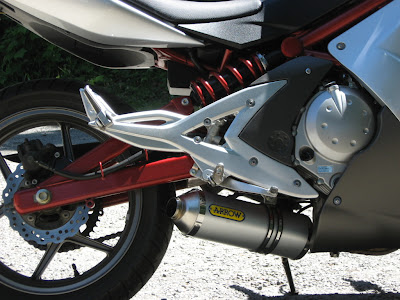 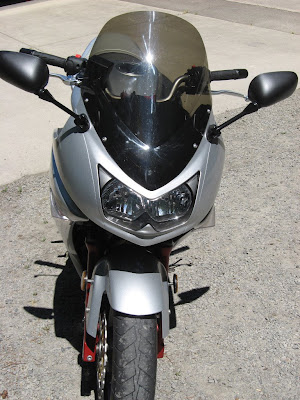 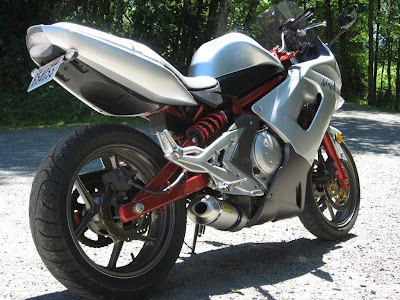 "Well-trained reflexes are quicker than luck." ~Author Unknown
Posted by Trobairitz at 4:55 PM