.
As most of you know that read this blog, Troubadour, I and our compadre Rick all headed out to Seattle on Saturday December 12th for the Cycle World International Motorcycle Show.
We were up at 3:30 am, out of the house by 5:00 am and on the train just after 6 am. We were all very excited to be on our way and the train ride was swift and uneventful.
Upon arriving at the King Street Station we were greeted by brilliant sunshine and a cool breeze. We journeyed to our hotel a few blocks away. We stayed at the Doubletree Arctic Club Hotel. A former gentleman's club built in 1917. Check in was easy and before we knew it we were in our rooms enjoying warm chocolate chip cookies. I must same they were some of 'the best' chocolate chip cookies ever. 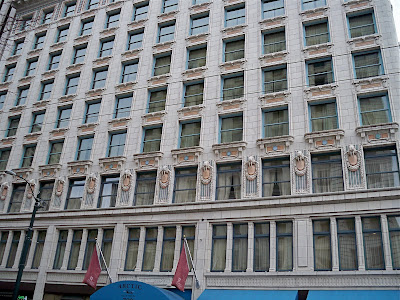 After a quick rest we walked to the show. We wandered around and looked at a lot of accessory booths and some bikes. Before we knew it, it was time to meet up with Bobskoot and Mrs. Skoot ( so nice to finally meet you). With introductions out of the way it was time to look around a bit more. Rick and I found ourselves drifting through the show while Troubadour was hanging out and getting photograph tips from Bobskoot. At one point the Skoots headed out and we traipsed around, just the three of us. It was busy enough that I didn't get a chance to sit on any bikes hence you won't see pics of me on any. Makes for a sad panda. Suzuki didn't have any TU 250's there. A local Triumph dealer was there but no Bonneville SE's were on display. We did learn to take two cameras with us. Since Troubadour had the camera I didn't take any pictures so I will credit every picture in this post to him. I think Rick may have a pic or two of Troubadour on a bike we can pilfer for a later post. 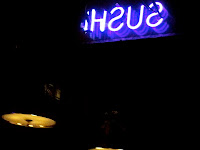 We headed back to the hotel and asked the front desk clerk for a sushi restaurant recommendation. He recommended Nijo. It was a short brisk walk and we were soon seated in a very nice restaurant. Much to our surprise we even hit happy hour. A few drinks and many tasty morsels were consumed. If ever in Seattle I would recommend this restaurant and the Avocado Fu egg rolls. Avocado, tofu and veggies all wrapped up in a handy egg roll. They were awesome. We didn't get any gratuitous pictures of the food, but since it was our first real meal of the day we were pretty hungry.
After a leisurely dinner we strolled in the brisk evening air and made our way to Westlake Center. While meandering we happened to pass a chocolate company and Troubadour took this picture of some yummy looking caramel apples. 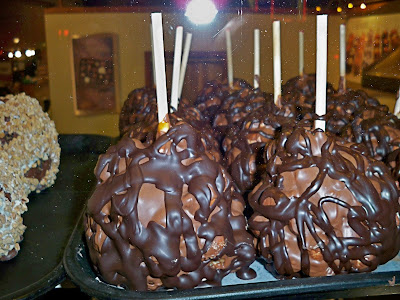 When we arrived at Westlake Center Rick led us up to the monorail and before long we were on our way to Seattle Center and the Space Needle. Neither Troubadour or myself had ever actually been to Seattle before. Driven by lots of times, but never stopped. We appreciated Rick playing tour guide for us. 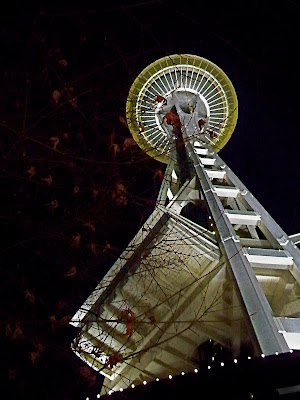 We splurged for tickets and rode the elevator to the observation deck. I can tell you that wind was mighty chilly when we went on our walkabout around the tower. A few pictures were taken and we went back inside to warm up.

We bought a coffee from the stand and relaxed. When going downstairs we wandered around the gift shop and looked at all the overpriced trinkets. No purchases made so we made our way outside and trekked back to the monorail station. On the way we paused to take a picture of this cool lighted tree located outside in Seattle Center. 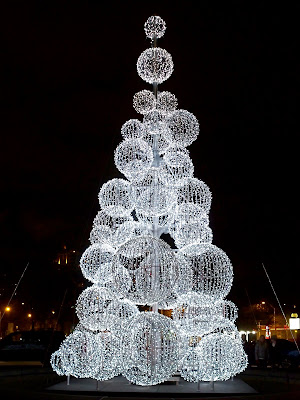 We finally made our way back to the hotel after 10. Seems there was a birthday party going on next door to us. We were pleasantly surprised when the music stopped and all was quiet. That is until 3:30 am when they returned from the local taverns/bars/pubs/nightclubs or wherever it is 20 somethings hang out to get even more knockered. By 4 am Troubadour was at the front desk requesting another room. Luckily the night clerk was super nice and after trying a few times (darn key cards wouldn't work) got us a room a few floors up. By this time it was after 5 am and we needed to be up just after 7 to meet everyone downstairs and start our day. That made two nights in a row with about 3 hours sleep each. Good job we were in the land of Starbucks as mass quantities of coffee was consumed to keep us going.
I must say that Doubletree handled things as well as we could have asked. There was no hesitation on getting us a new room in the middle of the night. They brought us complimentary coffee and warm cookies by the fireside Sunday morning and also offered complimentary breakfast in their restaurant when I checked out. I would not hesitate to stay with them again. 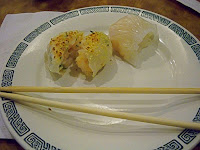 Bobskoot and Mrs. Skoot drove us to drop our luggage off at the train station and then for yummy Dim Sum for brunch at the Jade Garden in the International District. Who knew we'd drive around and find a 'Best of Seattle' restaurant first pick. The food was really flavorful and a nice visit was had with good people. After brunch the Skoots graciously drove our entourage to Pike Place Market. Parking spaces were scarce so we said our goodbyes.
Troubadour, Rick and I wandered around for several hours. Looking at this stall and that. Troubadour bought a nice wool scarf and some raspberry pepper jelly. Rick bought some Rainier cherries and when we got chilly we went over to the original Starbucks for Carmel Brulee Lattes. Yummy. Needed something to warm our hands. 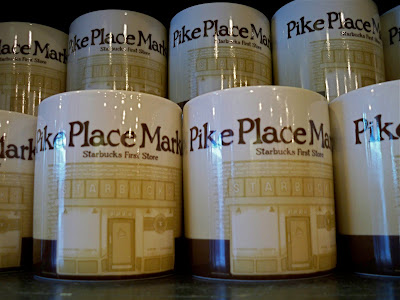 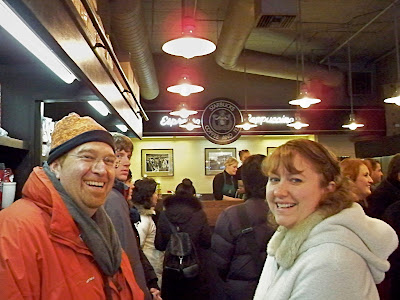 We wandered more both inside and out. We then headed over to the waterfront. By this point we needed some lunch so we stopped at Ivar's. There had been some chatter on one of our forum posts about a good place to have chowder. 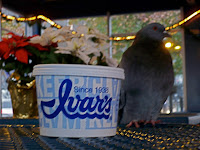 The Chowder Bowl in Newport takes the prize so far, but a bunch of fellows from Seattle said Ivar's was better. Well, we tried it and it isn't any Chowder Bowl that is for sure. Mind you at the Chowder Bowl you don't have to share your chowder with pigeons and you get to eat at a real table with real dishes and it is the same price whether you sit on a patio or not. Thumbs down for Ivar's.
It was getting cloudy and starting to get darker out so we headed towards the train station knowing we had a bit of a trek in front of us. We managed to make it by 4 and our train didn't leave until 5:30. That gave us some time to sit at the train station before departing. We arrived at the station in Albany by 11 pm and after a short drive home we managed to get to bed by 12:30 am with the alarm set for 6:00. We managed to get less than 12 hours sleep over three nights but we had a great time. We'll catch up on sleep sometime. Next year we are thinking maybe we'll try the show in San Francisco just to be different. Will make for a longer train ride though.
-Au Revoir
"The whole object of travel is not to set foot on foreign land; it is at last to set foot on one's own country as a foreign land." ~ G.K. Chesterton
Posted by Trobairitz at 9:01 PM