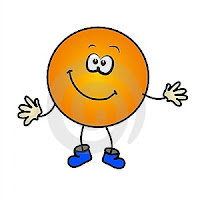 It has been several weeks since my last blog post mostly because there just hasn't been much to write about. Of course I could have blogged about the weather, but cloudy skies and rain is not a great motivator.
Let's start with Memorial Day weekend. On the Saturday we rode to coffee but it was quite chilly with dark skies so we didn't go for a ride after. We did take the car to Eugene just to find out both the Triumph Dealer and Discount Motorcycle Parts were closed. Had Mio Sushi for lunch and then drove home. The sun was finally out so we managed to get in a few hours of yard work before dark.
Sunday we went two-up on an all day ride planned by a friend on the forum. Was a nice ride South then East through the valley and back home again. Stopped in Creswell at Los Cabos for lunch but we didn't take any gratuitous pictures of the food. It started out as quite an adventure. We met everyone at the appointed meeting place and just as we were gearing up to go Troubadour noticed a flaw in his front tire. He decided it wasn't safe for the ride, but had a new one waiting at home ready to be mounted. We decided to see how fast we could change it and catch up.
We raced home and in a flurry of activity managed to take our gear off, completely change the tire, gear back up and head out in under an hour. We phoned Rick and left him a message to have the group wait for us in Noti where they were joining the Eugene group of riders. Turns out we were only about 10-15 minutes behind. Not too bad. Kudos to Troubadour for his quick tire change and even quicker riding to catch up. They gave us a quick 5-minute break to catch our breath and back on the road we went.
Here is a few pictures of the group taken just after catching up to them at Noti. 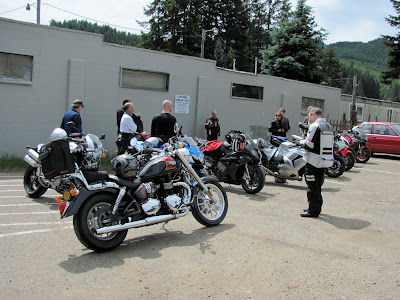 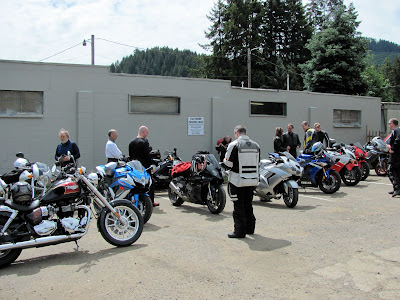 We had pretty good weather for the ride. A mixture of sunshine, light rain/misting, and high clouds. Here are a few more pics taken by Troubadour at one of the stops to let everyone catch up to the sport bikes that were leading. 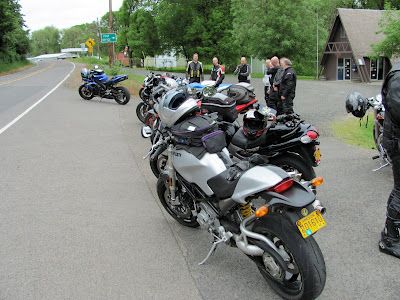 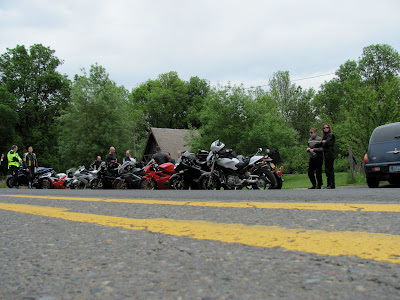 And one of our fearless leader and sweep. Sweep on the left and Fearless Leader and ride organizer/instigator on the right. 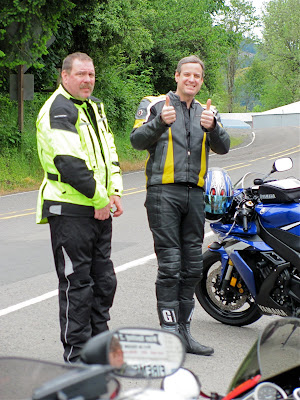 It was a long day but we had a good time. I think we were tuckered out by the time we got home and maybe even napped a little.
On the holiday Monday we were bored and it was raining so we thought we'd drive to Salem to see what stores were open. Just as we were heading out Rick stopped by so we invited him to join us. We wandered around a few stores and had sushi for lunch. This time at our favorite place Sushi Kyo. Yum. They are the best we've found out of any we've tried locally.
Normally we'd have gone back to work Tuesday, but took the rest of the week off. We originally planned to go somewhere or do something fun on our days off, but as the week approached the weather was still looking too crappy and rainy so we decided to stay home instead. Tuesday we had a few errands to run and ended up having sushi for lunch again this time at Momiji's in North Albany.
Wednesday we decided to drive to Portland for the day, but needed to be back for bike night. We ate too much at Olive Garden for lunch and wandered around R.E.I. We then headed to Ikea and raced back home. I opted to stay home for the evening and Troubadour went to bike night solo.
Thursday morning came and we went grocery shopping. Supplies were getting low. After we went out for lunch at Big River. A place we wouldn't normally go, but I had a gift certificate that we needed to use up so that was nice. That done we puttered the rest of the day away.
Friday we got some tomato plants planted in Topsy Turvy hanging containers. We found them on sale at Home Depot. We'll see how they work. We are hoping for lots of tasty tomatoes this year... if we get enough sun. The sun came out early afternoon on Friday so we decided to take the bikes out for a putt. Thus far I'd only had the TU out to Saturday morning coffee and back a few times.
Troubadour decided I could tackle the road to Alsea Falls and off we went. Here is a picture of the falls and also one of me as we were just getting ready to head back home. 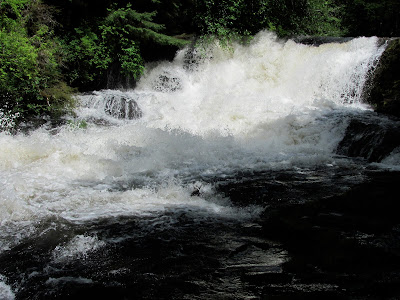 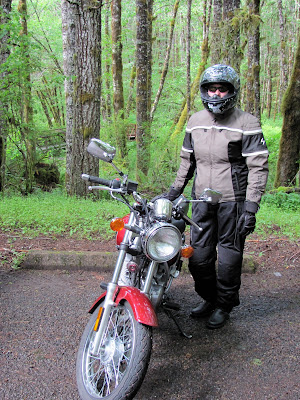 Yesterday dawned with brilliant sunshine and it was time once again for Saturday morning coffee. We geared up and took the bikes. After visiting for a while we decided we needed to fill the bikes with petrol and maybe ride to Eugene. Fueling up was an adventure as I don't think I've touched a gas nozzle since we moved to Oregon in 2001. That done we headed out. Rick came along and did a nice job of sweep. Hopefully I didn't hold him up too bad.
We meandered down the back roads and stopped at the Triumph Dealership where Troubadour test drove the new Tiger. I'll let him tell you how he liked it.
After that we went to Mio Sushi for a late lunch then headed home. This time with Rick leading and Troubadour running sweep. Part way through the ride home Troubadour pulled out the camera one handed and took a few shots of me on the bike. He was shooting blind though due to the reflection on the viewing screen and trying to ride at the same time. Pretty talented. 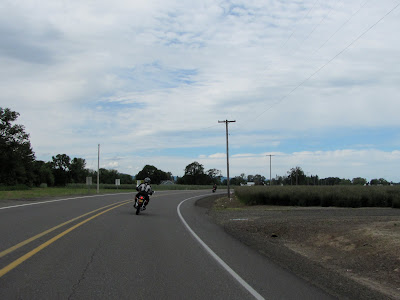 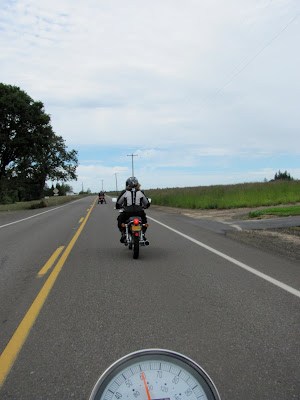 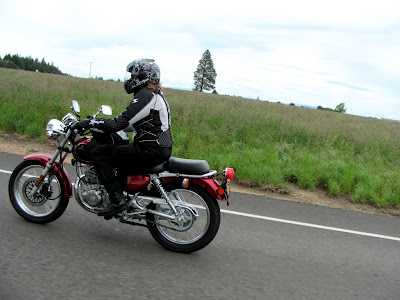 I managed to put 50 miles on the TU on Friday and 100 miles yesterday so I am slowing getting more experience. I need a little work on my turns onto side streets but that will come in time. And of course I don't lean as much as I should in the corners but that too will come with time and experience as I gain confidence.
All in all not a bad vacation. Or should I say 'staycation'. We would have liked to get more yard work done and get more riding time in but we did fine handling the weather we were given. One of these days summer weather is bound to arrive and we can do all of the things we would have liked to have done last week and more.
In retrospect we didn't do a whole lot on our week off. Instead of travelling to places far and wide we opted to stay close to home and eat lunch out most days. Cheaper than going on vacation but still a treat.
-Au Revoir
"A good vacation is over when you begin to yearn for your work." ~ Morris Fishbein
.
Posted by Trobairitz at 11:00 AM