.
I realized I hadn't posted since June 10th and figured I'd better hop to it. As I sit here wondering where the time has gone, I try to think of what we've been up to for the past three weeks. I know allergy season has been in full force so I haven't been feeling as good as I'd like and some days being outside is difficult. I usually load my pockets with Kleenex and persevere. I am sure I don't remember all of what we have done. I don't think it has been too exciting. I did have two "firsts" come up and they happened on the same day. As most of you know Monday June 21st was International Ride to Work Day. My first first was that I rode my TU to work that day. This was also my second first, which was riding solo with no supervision. I had not been out on the bike by myself prior to that. Troubadour felt comfortable that I could handle it. Heck it was only 3 miles. I made it there and back and had a big smile on my face. I did it and know that I can and will do it again. I hate to suit up for only 3 miles so I don't see myself riding to work too often but I know I can if I want to.
The ride there and back was uneventful. My parking space behind the building is on a slight incline and I backed the bike in. When leaving I started it up while I was putting on my helmet, etc. As I was just about to put my sunglasses on I noticed it was started to slide slightly downhill due to the vibration. I realized it was trying to flip up the kickstand. Quick action had me grabbing the bars and flipping the kickstand back down. After that I sat on the beast while putting on my glasses and gloves. I was taking no chances on it going over. It is still unscratched and I hope to keep it that was for years to come, fingers crossed.
This last Saturday June 26th Troubadour, Rick and I took a day trip to Portland. We stopped and had dim sum downtown for lunch. Tasty but not as good as what we had in Seattle with Bobskoot and Mrs. Bobskoot in December. Sorry, no pictures of the food. As we were making our way across town Rick Rick (our handy interactive navigation system - more fun than Tom Tom and comes with a sarcastic mode) took us the back way and showed us the Pittock Mansion. We had no clue it was even there. It is up in the west hills of Portland and is a sight to behold. There were too many trees in the front to get a picture, but we did get this shot of the back of the mansion. I've always been sucker for pictures of architecture. 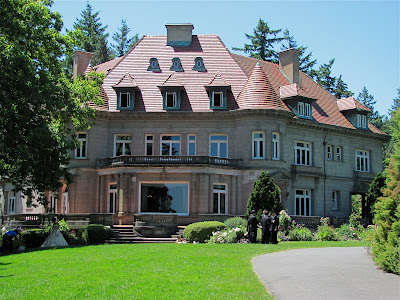 This was the home of entrepreneur Henry Lewis Pittock and his wife Georgiana Martin Burton Pittock. 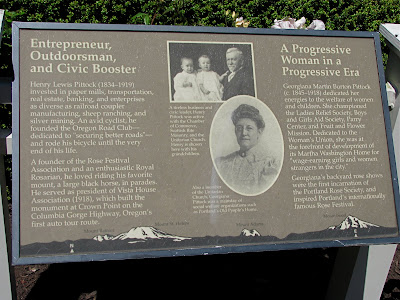 We were too frugal to pay the $8 each entry fee to tour the mansion so we had to satisfy ourselves by walking around the grounds and also looking at the groundskeepers four-story cottage. It was a beautiful sunny day. Perfect weather for touring the gardens. The grounds were lovely with all kinds of shrubbery, roses and a breathtaking view of Portland and the mountains in the distance.
I believe Mt. St. Helens is in the background of this shot.... 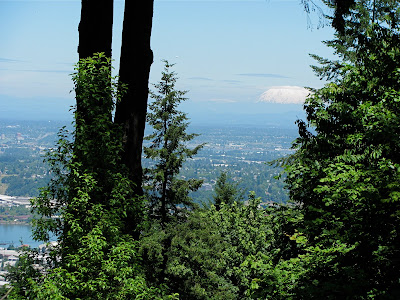 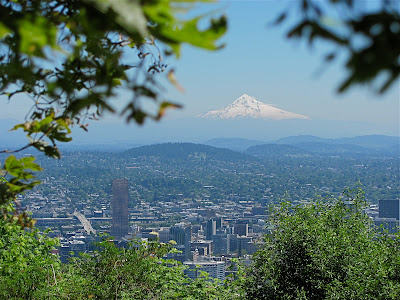 I must give photo credit to Troubadour. He who holds the camera, takes the pictures. He did a great job. As we were heading around the side garden I asked him to take the following shot. I thought it would be interesting looking up at the mansion with a bit of maple tree in the foreground. 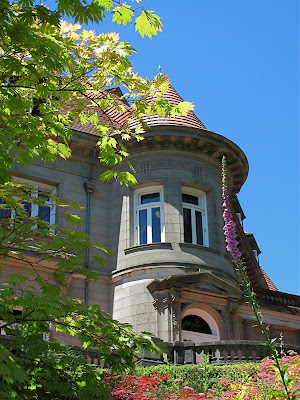 Our curiosity was satisfied and our legs were properly stretched after such a big lunch so we got back in the car and headed to the Columbia Employee Store in Beaverton. Rick had a voucher to get in and was nice and invited us to go with him. We'd never been to the employee store but had bought Columbia Sportswear from other retail establishments. It was pretty busy on a Saturday afternoon but we didn't mind braving the crowds for such good prices. Everything was at least 50% off retail. Some items were even 60% off. We each managed to find a few things and probably spent more than we should.
All that shopping and trying on clothes is thirsty business so we found a Starbucks. The guys had some Java Chip Frappuccinos and I had an iced Caramel Macchiato. Mmmm. Sufficiently cooled down we went to a local motorcycle dealer and wandered around trying on different gloves and gear and looking at all the bikes. They have Yamaha, Suzuki, and Kawasaki so there was a variety.

We decided to head for home but managed one more stop to wander through Crate and Barrel. We saw a Crocs store but it was too late in the day to stop. Next time though, as we know where it is now. But what color to get. Red? Black? No, that might match the bike too much. I might just have to go for a nice shade of lavender for contrast. We'll see. Any suggestions?
As we headed home we started to get hungry for dinner and stopped at Red Robin in Salem. We ate way to much. Finally made it home about 9 pm. Was a long but good day.
Yesterday we decided to stay home and do some yard work. Speaking of yard work... a few weeks ago we did manage to get 5 yards of bark mulch and 2 yards of planting soil delivered so technically we've been doing something the last few weeks. Just takes a bit to jog my memory. All the bark mulch went in the backyard so one of these days we'll need to get another 5 yards for the front. One day.
The long weekend is coming up but we have no big plans. There is a motorcycle show in Independence on Saturday July 3rd that we'll go to. Our friend Brandon kind of spearheads it so we go and help him set up and take down the tents, etc. We had a great turn out last year and we're hoping this year the second annual will be even better. I had the nighthawk this time last year and sold it right before the show so I didn't have my own ride entered. This year I'll be riding the TU to it, so I will have another first. First time riding to and entering a show. I am sure this will trigger more photos and another blog post.
Until then, happy riding and enjoy that sunshine. Summer is finally here.
- Au Revoir
"A true friend is one who thinks you are a good egg even if you are half-cracked." ~ Author Unknown
.
Posted by Trobairitz at 8:05 PM