.
Last Sunday was the planned Aufderheide Ride. A few of us were getting together for an all day ride equalling between 250-300 miles. Not long enough to have to pack a toothbrush, but getting close.
Troubadour and I were up for a nice leisurely ride with lots of stops, two up on the Triumph because of the distance. We found out that Bolty and Stacey were in for a more direct, ride the ride and go home kind of a day so two groups were formed. We met Rick at the appointed meeting spot at 8 am Sunday morning. Headed southeast towards Coburg to meet up with Josh. From there it was down to the Original Pancake House in Eugene for breakfast and to meet up with another friend and fellow rider Tim (aka Wiley)
Food was consumed, coffee was drank and stories were told. Some had baked omelettes while others hash browns and eggs. I opted for the potato pancakes thinking they wouldn't be too heavy. They weren't heavy but they were quite bland and a little too greasy for my taste. Nice presentation though and the service was excellent. 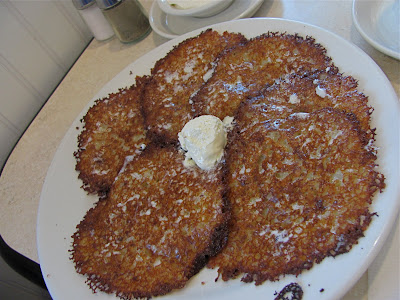 Bellies full we headed south on I-5 for a few miles until exiting and heading east on Highway 58. At Westfir we turned north/northeast on the Aufderheide National Forest Scenic Byway. The view was beautiful and the weather was perfect. The roads had quite a few frost heaves in them and the Triumph was a little wallowy in some of the corners. There were a few big bumps in others. I hadn't ridden pillion in a while so I was alternating between relaxing and enjoying the view to grabbing for a handle on some of the bigger bumps.
For the first leg of the road it seemed to be that way more often than not until we made it to Box Canyon for a break and to use the facilities. 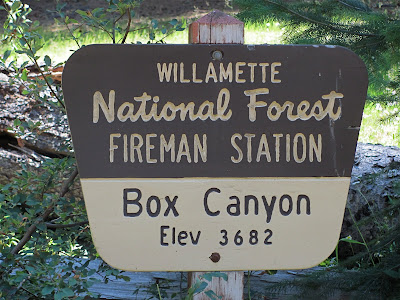 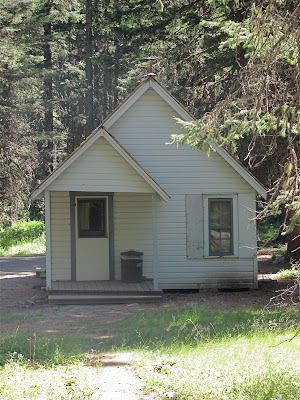 Some took the chance to stretch their legs: (Rick) 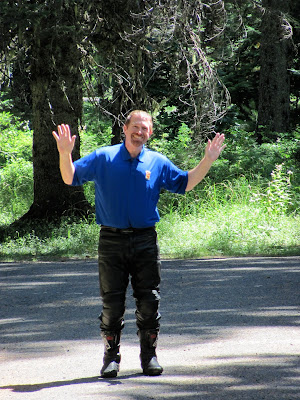 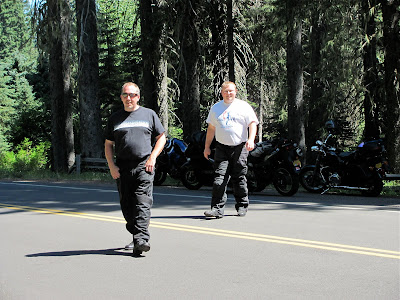 While others checked their cell phone for service: (Tim) 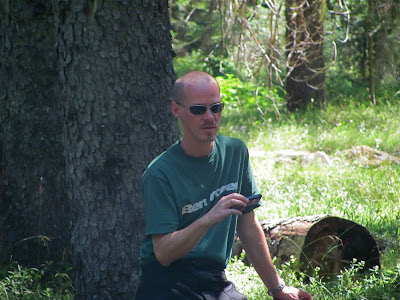 Just 4 bikes along for the ride this day. 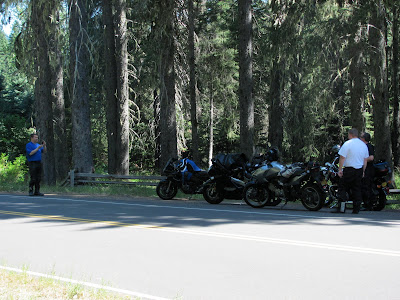 Before long we were back on the bikes and heading out. A nice pace of carving twisties later and we arrived at Cougar Dam/Reservoir and it was time for another break. 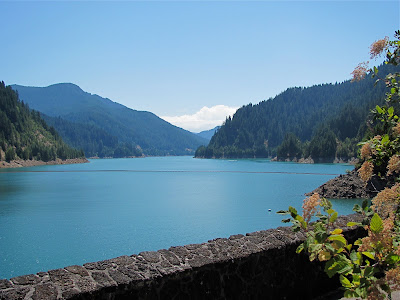 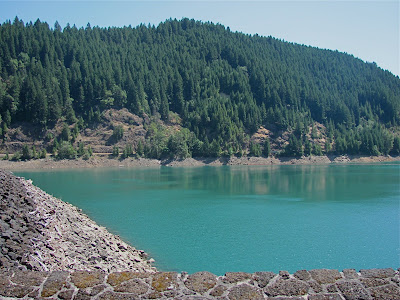 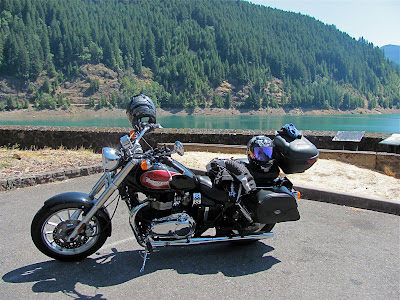 After everyone was rested and rehydrated we motored along. We came to Highway 126 and headed east towards McKenzie Pass. After a petrol stop and down the road a right turn, we were on the McKenzie Pass Scenic Byway heading towards Sisters. Absolutely gorgeous road. No frost heaves. Just smooth year-old pavement. Some gravel in the corners and you had to watch out for the rogue SUVs in your lane but it was such a beautiful ride. McKenzie Pass Scenic Byway follows the path of an 1860's wagon route.
When you reach 5,325-foot McKenzie Pass, you're enveloped by lava on all sides from the 3000 year old, 65 square mile lava flow.
We stopped at the Dee Wright Observatory in the middle of the lava fields for a break. The observatory is a lava rock structure constructed by the Civilian Conservation Corps in 1935, and named for their foreman. 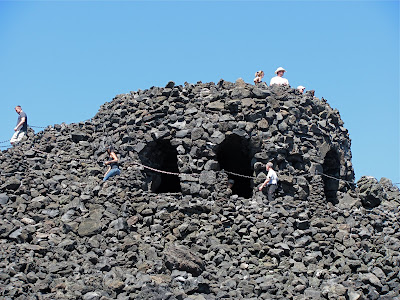 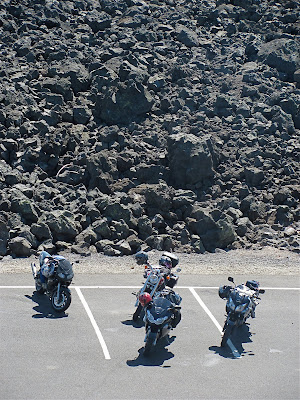 The view from inside the observatory was also interesting. There were cut outs so that you could view specific craters and mountains. 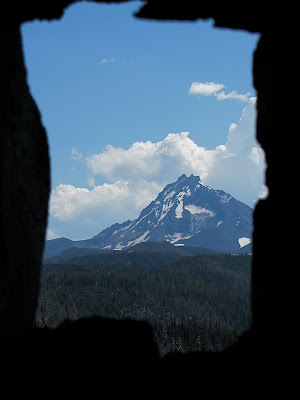 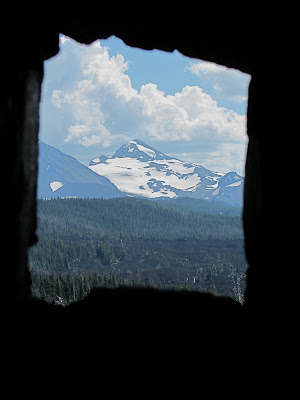 The top of the observatory had a brass sundial pointing out the different peaks and naming them for reference. Troubadour couldn't get up high enough to get it all in one picture. 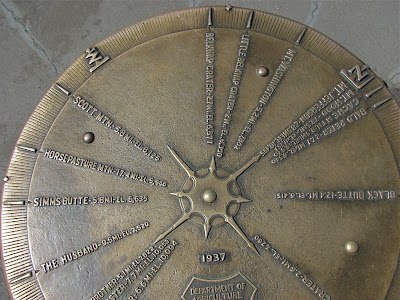 By this time our camera batteries were critically low. It did let us snap one last picture before it died. Our spare batteries were in Troubadour's other jacket so this picture of Rick on the way back to the bikes was the last one we could take that day. 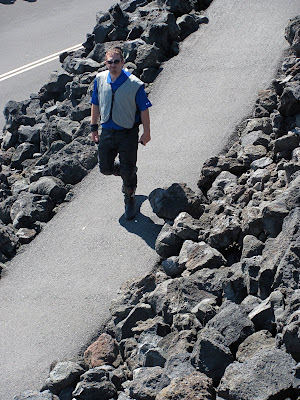 Once sufficiently cooled off we headed to Sisters looking for ice cream. Rick lead us to a great little shop that had hard ice cream and soft serve. We managed to eat our cool sweet treats in the shade and dunk our Buffwear in the soaker hose of the visitor center. Then, off we went towards home.
By chance Wiley met up with a fellow rider from Eugene while at the dam. He then waited at the observatory to ride with us. They then headed back to Eugene together while Rick, Josh, Troubadour and I carried on down the Santiam Pass Scenic Byway (The same route we took back from Bend after the IMBC).
The McKenzie Pass/Santiam Pass Scenic Bylway boasts the highest concentration of snowcapped volcanoes (and associated glaciers) in the lower 48 states.
We left Josh in Lebanon where he calls home and headed to Corvallis. We made it home at 6:50 pm. A nice 11-hour day. At least it wasn't all in the saddle.
I came to the conclusion that Troubadour's America isn't that comfortable for riding pillion and I am okay taking my own bike when we ride. Maybe I'll venture over 200 miles in one day on the TU. You never know.
-Au Revoir
"I think that travel comes from some deep urge to see the world, like the urge that brings up a worm in an Irish bog to see the moon when it is full." ~ Lord Dunsany
.
Posted by Trobairitz at 5:00 PM