.
Hard to believe we've said goodbye to August and hello to September already. I've referred to August in my title as Augtober, as the weather we experienced the last few weeks was more like a hybrid of August and October. Warm one day, cold the next.
I've been trying to think of what we've been up to since my last post and haven't come up with a lot.

On Saturday August 21st we rode to morning coffee and then Rick, Bob, Troubadour and I rode down to Eugene. We stopped at Discount Motorcycle Parts where I bought some more earplugs and a funky purple Buff. Always nice to have an extra to use when the other is in the wash. No one likes a dirty buff. From there we headed over to the Triumph Shop and talked to Rod for a few minutes and looked at their bikes. They don't have a lot in stock right now. They are trying to clear things out a bit before winter sets in. With the oohing and ahhing and drooling out of the way we went for lunch at Ring of Fire. It was a sort of eclectic Asian fusion kind of place. Not bad but I don't think we'd go back. A little on the pricey side. Spring rolls, calamari, tempura veggies and crispy tofu was consumed.
We planned on meandering the back roads on the way home. Bob left prior to our departure as he needed to take a more direct route home. He had a 'honey do' list with his name on it. We made our way through the streets of Eugene and ended up heading North out of town on River Road. We stopped at Lone Pine Farms in Junction City. Rick was on the hunt for some peaches. When we stopped a goat enclosure caught our attention. We had to go check them out. 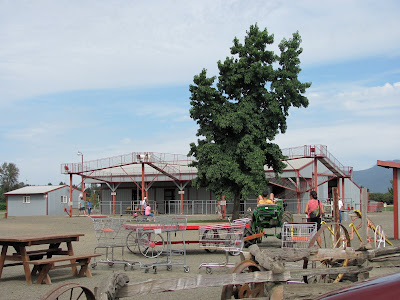 Quite the elaborate set up. 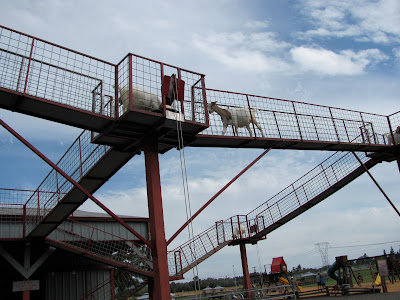 I don't know why anyone would put rocks in their feeders but apparently enough people did that they had to put up a sign: 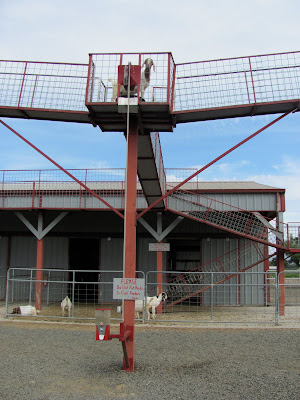 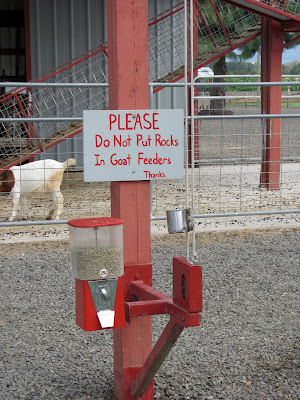 Sufficiently amused by the goats we headed inside. We didn't get 10 feet in the door when we looked up and spotted this nest built on a power bar that was mounted on an overhead beam. There were 4 'baby' birds the mother was trying to feed. They looked almost ready to fall out of the nest they were so big. 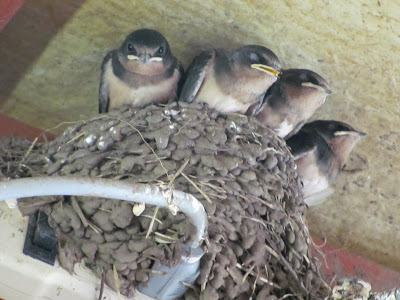 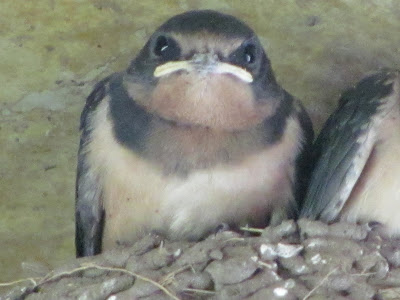 Rick finished his shopping and we continued home. Always a good day when spent riding with friends.
On Thursday the 26th I had a birthday so the boss took the office out for lunch (all four of us) and Troubadour was able to ride in and join us. We went to the Woodsman. A tasty Thai place in Philomath. We hadn't been there in quite a while. I can't tell you how old I am but I can give you a hint and say we won't have to celebrate my 40th until next year.
Saturday the 29th Rick, Troubadour and I took the car and went to coffee and then to Portland for the day. We went the back way and stopped at Cascade Moto Classics to pick up the gift certificate I won at the Demo Days Event. Couldn't find anything to buy so I'll save it for later.

From there we went to Jin Wah restaurant in Beaverton for dim sum. It was the third place in the Portland Metro area we've tried since January and it was the best of the three. We shared shrimp balls, shrimp dumplings, Chinese broccoli, salt and pepper squid, taro cakes and more. Tasty.
I am thinking that when we had dim Sum in Seattle they were either having a Sunday special or made an error on our bill as dim sum has been quite a bit more expensive here in Oregon.

We were too full when we left so RickRick directed us to Uwajimaya, an asian supermarket. Wow, it was awesome. Nothing like that around Corvallis. We bought some miso and yummy nori snacks. Good thing we were full or I am sure we would have bought more. We will definitely be back to shop.

We stopped by REI in downtown Portland to look for the Alite Monarch Butterfly chairs Bolty tipped us off that were on sale. They fold up to fit in saddlebags and other luggage. Troubadour and I managed to grab 2 of the last 3 that were in stock. A nice burgundy red color. 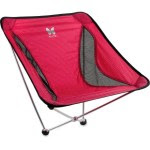 The picture doesn't do it justice. That left one chair for Rick. He didn't care for the vibrant purple color so had them call another store. After a brief stop to meet Rick's mom we went to REI in Clackamas where they were holding a blue chair for Rick. Good thing they were holding it, as they too only had purple ones left. Not a popular color I'm thinking. The chairs are super comfy for only having two legs. Your legs make up the front two legs of the chair when sitting.
We stopped for a cold yummy Starbucks and headed South towards home. By the time we got to Salem we were a little hungry and stopped at Sushi Kyo knowing we could just get a few things to eat and it wouldn't take too long. Again, we were too full so we decided to walk around ShopKo to get some after dinner exercise.
We managed to get home by 9 pm. A leisurely twelve-hour day. Not too bad. We slept really well that night. On Sunday Troubadour went and helped a friend change the tires on his motorcycle and I stayed home with the cat and puttered around. A nice relaxing day. Of course it was back to work on Monday.
Not much planned for the upcoming long weekend. I think cleaning the garage is on the agenda. The cool weather is coming and we need to make room for a ton of pellets to heat us through the winter. Sounds exciting doesn't it?
Hopefully we'll have time for a ride. I've got just over 1300 miles on the TU so far and would like to get some more practice in while it is still sunny. They are calling for sunshine and 78˚ on Saturday.
-Au Revoir
"How old would you be if you didn't know how old you were?" ~ Satchel Paige
.
Posted by Trobairitz at 6:50 PM