Win Some, Lose Some

.
Sometime during the last week I decided that my new Rev'it riding pants were really going to bother me in the way that they ride up my leg while on the bike. The cold air blowing over my exposed leg coupled with having the zipper exposed to the rain may have added to the soggy cold socks on the way home last Sunday and that got me thinking.
I messaged back and forth on Facebook with Mike from Premier Motogear to see if they had a Cayenne Pro trouser in black in a medium tall. Of course not. That would be too easy. Could he get one in? He didn't think they could get in any Cayenne Pros in black. He did say he was able to order a pair in green if I wanted that. Ummmmm, no, thank you.
Bollocks! He suggested I bring the pants back and try the Rev'it Sand trousers on again only this time in the medium tall. I was trying to remember why I didn't like the Sand when I tried them on last weekend, but capitulated and said sure. If they didn't work he was willing to let me return the pants for a refund even though I'd worn them once.
After having a nice nothing but blue sky, warm sunny Friday, yesterday dawned cloudy and drizzly. We took the car to coffee. By the time we left the coffee shop and headed to Premier it was raining. Of course it was, it's the weekend. Troubadour rebelled and wore shorts anyway. I wore my new Keen Emerald City sandals (hooray - they are finally making dressy looking ones) The closer my feet are to naked the happier they are so I love the time of year where I don't have to wear socks and closed shoes. 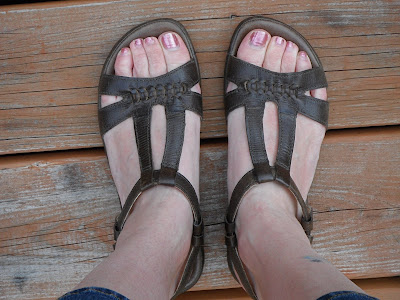 (Bobskoot inspiring feet photos again)
When we arrived at Premier, Mike grabbed the Sand trousers and pulled out the hip padding and had me try them on. They fit in the waist (after cinching) and thigh area, same as the Cayenne Pro, but they were definitely baggier from the knee down. In their back shop they happened to have a Kawasaki Concourse. He was nice and let me go back to check leg length while in a riding position. Major difference between the standard length and a tall. Tall was the way to go.
Now I had a dilemma. I could order the Cayenne Pro online and get them in black in the correct size and length OR I could take the Sand I was trying on.
Any guess on which I chose?
I chose the Sand I was trying on. A few things tilted my decision in that direction.
1) Great customer service and I was able to buy local. Not always easy to do these days;
2) The Sand trousers have more adjustments at the calf for tightening them than the Cayenne Pro;
3) The Sand have cargo pockets on the legs whereas the Cayenne Pro just had narrow slit pockets at the top; and
4) The Sand trousers were $100 less that the Cayenne Pro. 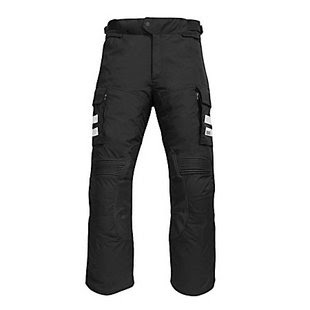 Sand Trousers (note nice cargo pockets)
I figured all those outweighed a slightly baggier pant from the knee down. I didn't realize until after we'd gotten home and I did a little research that the Sand do not have any Cordura either. They are made with "PWR/shell seat and PWR wax coating on the inside of the legs for a better grip on the bike." I am sure they will wear just as well as the Cayenne Pro for how I use them. Win some, lose some.
After leaving Premier we headed north to Salem to Sushi Kyo for lunch. After stuffing ourselves on miso soup, edamame, and sushi rolls we headed to Costco. Not the best choice of things to do on a Saturday but we needed a few necessities such as coffee and toilet paper.
We ended up buying a small pocket camera while we were there. They had the Fuji XP20 in a bundle with a rechargeable battery, neoprene case, battery charger, and 4 GB memory card on sale for $139. We have been thinking of buying a smaller pocket size digital camera so that when riding we'd each have one and the Canon is just too big for my pockets. This camera claims to be water proof, dust proof, freeze proof and shock proof. Sounds perfect for motorcycling. We decided to purchase it. How wrong can you go for $139, especially when Costco has a 90-day return policy on digital cameras. There were three colors to choose from; green, orange and blue. Of course I got the blue. 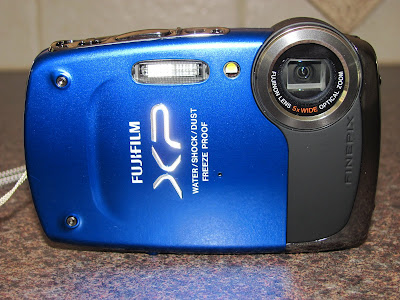 This camera only has a 5x zoom, which is about half of the Canon, but it has the panoramic stitching feature as well as being very small and light. So far it is easy to use and easy to switch between the features.
When we got home last night we charged the battery, which only took an hour, and started taking a few pictures to try it out. Luckily the sun had come out by this time. Troubadour went out and took a few pictures of flowers in the back yard. 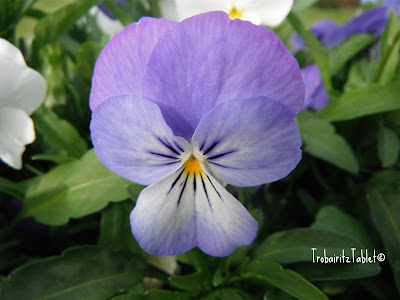 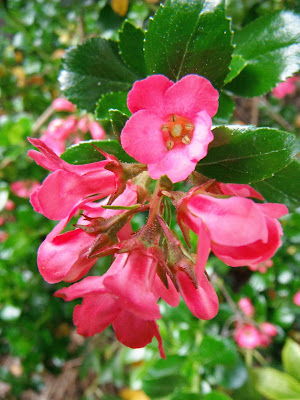 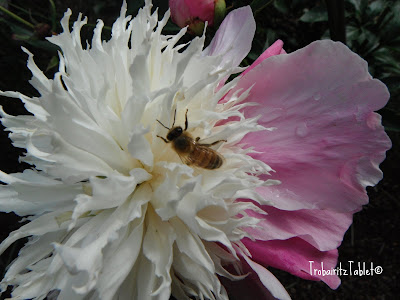 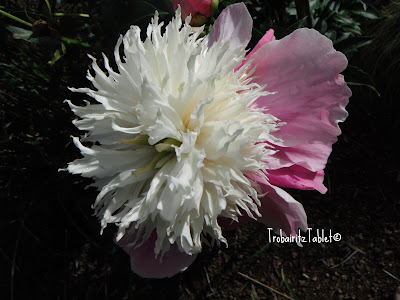 (Tree Peony sans bee)
I also tried it out a bit on some things around yard. 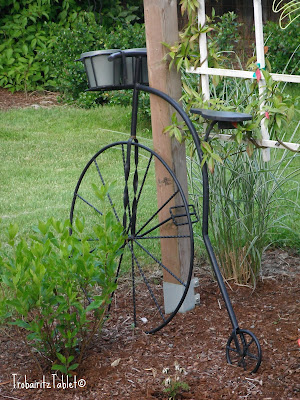 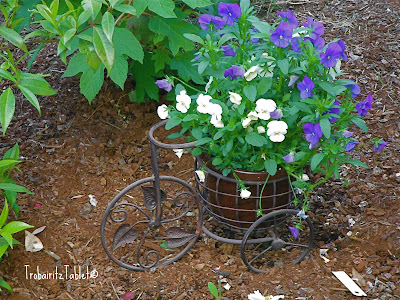 This morning Troubadour went out for a ride with a few friends. I chose to stay home. I think he needs to go riding every now and again without a newer rider hanging around so that he can go at his own pace and have fun with the guys.
I just took the camera out to test the panoramic mode and came up with the following two pictures of the back yard. Click the picture for a larger view.

(Back yard taken from the deck)

(back yard taken standing at the pergola swing)
I had to take one last picture. This is a little acrylic mushroom statue. I bought it a few weeks ago on impulse to bring a bright spot to the flower bed by our back deck. It makes me smile. 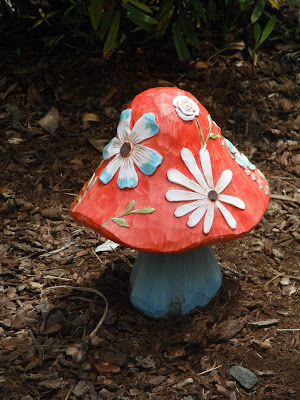 So, as you can see, the camera doesn't take the greatest or clearest photos but if you take it for what it is, I think we'll have a camera that can be abused riding, hiking and travelling and will help us capture the moment. For times that require stellar pictures we'll still have the Canon.
I have found two things awkward with the camera so far. One is that you need to open the battery/memory card door in order to open the little door that hides the USB hook up. This is because they both need to be sealed under the waterproof latch; understandable but inconvenient. The other thing is that the shutter release button isn't on the very right side of the camera, the zoom is. I find this slightly awkward since I am used to the Canon. The large rectangle button between the on/off button and zoom is the shutter release. You win some, you lose some. 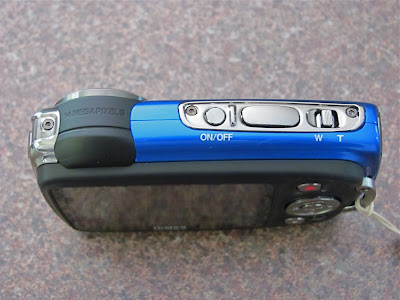 " Photograph: a picture painted by the sun without instruction in art." ~ Ambrose Bierce
.
Posted by Trobairitz at 2:20 PM