.
One would think with all the San Francisco posts I've put up lately that we haven't been doing much riding. Not so.

For the last three weekends we've gone riding. I now have more miles on Max in the 6 months I've had it than I did on the TU the entire year I had it.

On September 4th we took a ride over to the coast for chowder. We went with our friends Josh and Meg. Meg had not done the Alsea Falls route to Waldport before so it was a good day for it. 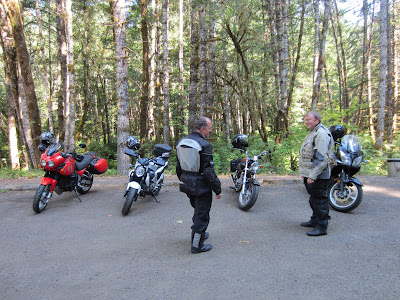 (Troubadour and Josh with the bikes) 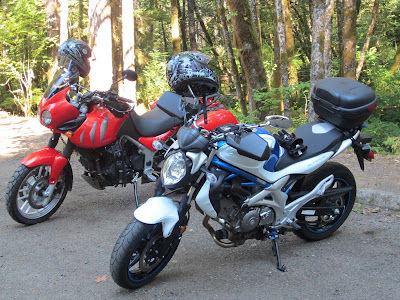 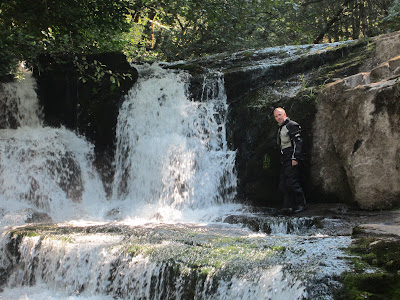 It was a great day for riding although it was chilly at the coast. It was also the long weekend so there were a lot of people around and a long wait for lunch. The service and food at the Rogue in Newport was the worst we've ever experienced and we won't be back. Needless to say no food porn from that ride.
* * * * * * * *
The following weekend was a group ride with our local motorcycle forum. It had been a while since we joined a group ride so we gave up Saturday morning coffee in lieu of hanging with the group. Turns out a lot of other riders had the same idea. 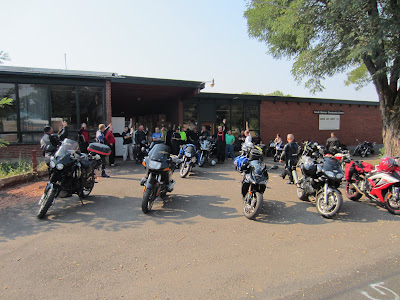 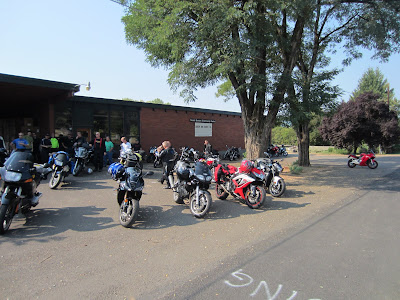 I think there were a total of 27 bikes so we broke into 3 groups; Speedy group, medium group, and a group of newer riders. Troubadour and I had radios and both knew the route so we volunteered to lead/sweep the newbie group. I am used to lagging behind a large group, but volunteering to sweep, especially newer riders was a first for me.

Once again we did Alsea Falls and then took Highway 34 to the coast. A sense of deja vu from the previous weekend. We made one stop on the way over. We parked in two areas looking for shade. 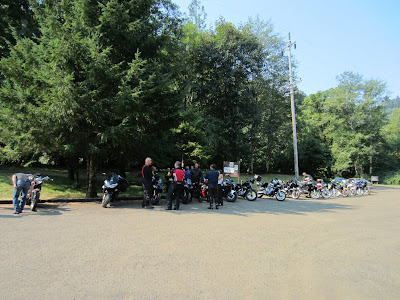 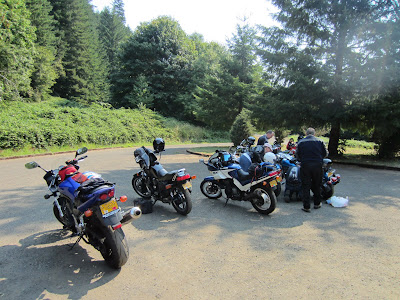 From there we continued to Waldport where we took a break and ate our picnic lunches. We also layered on some thermal gear. It was darn chilly at the coast. We then took Highway 101 down to Florence where we stopped at the Fred Meyer for fuel and a break. 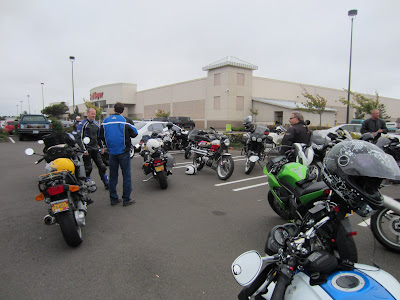 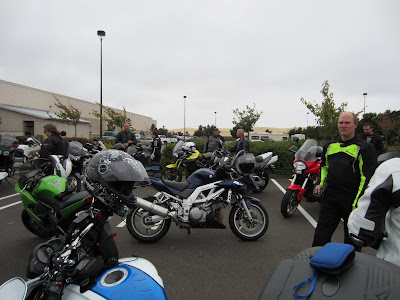 From Florence we headed inland. Stopped to take thermal liners out about 15 miles in and continued the long way past Triangle Lake. We stopped one more time before the groups split into different directions. Some heading North, South, and East to get home. 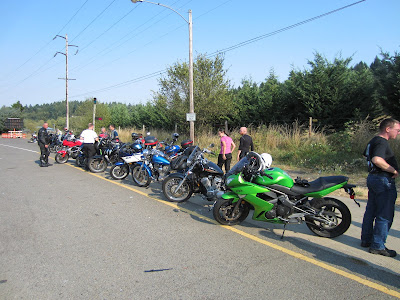 (Weigh scales on Hwy 36 by Cheshire)

Last Sunday found us on an all day adventure with Josh and Meg again. Left the house at 8 am, fuelled up and met them in Cheshire at 9 am in chilly 42˚F weather. I must admit I had the rain liners and quilted thermal liners in my Rev'it jacket and pants. I also wore yoga pants under the overpants and two shirts under the jacket. I was warm enough. Thank goodness for heated grips too. 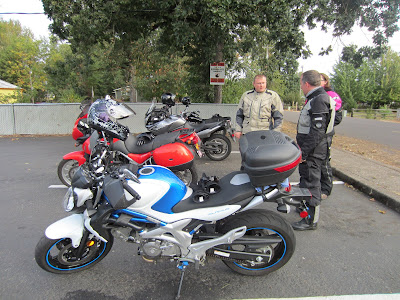 (Meet up at Dari Mart in Cheshire)

From Cheshire we made our way South on Territorial highway and then turned East towards Cottage Grove and Dorena where we stopped for a snack and a rest break. 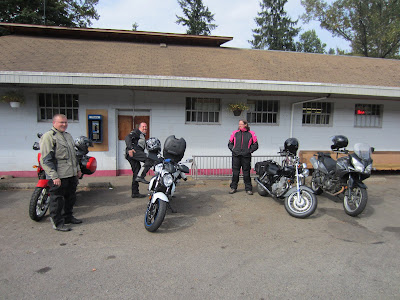 (Troubadour hamming for the camera in Dorena)

Just past Dorena we made a right turn and headed South onto a forestry road, which eventually turned into a one lane chip seal road up into the mountains. It was deserted and full of twisties - just perfect. We stopped at a fork in the road for another break and a check of the map. 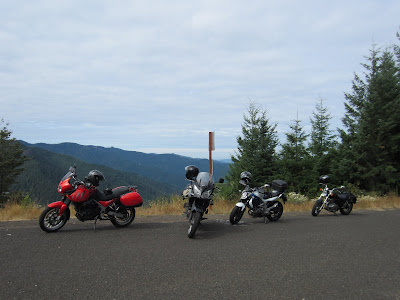 I set up the camera with the gorilla tripod to get a group shot. If only I'd found something taller than the road to put it on. 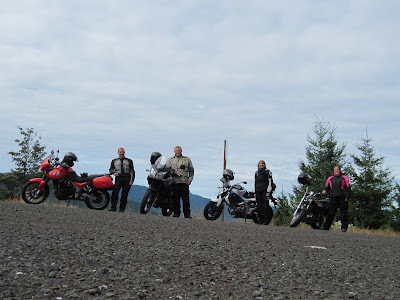 From there we headed down the mountain and encountered some road construction full of nice soft deep gravel. We all made it through safely, although Max did a little fishtailing on the first section. I think there were 5 sections in all.

We popped out onto Highway 138 and headed West into Glide where we stopped for petrol and to take off some layers and liners. Damn the valley had warmed up. We then took more back roads into Sutherlin and Oakland where we stopped for lunch.
One of the main purposes for the ride was to go to Tolly's Restaurant. An old historic soda fountain type of place. Unfortunately we did not beat the tax man and it was closed. Seized for non payment of taxes. 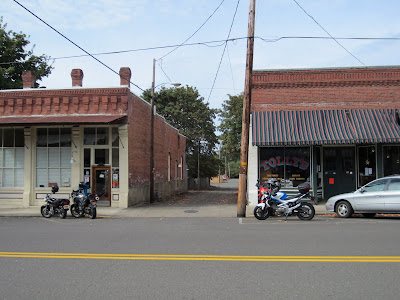 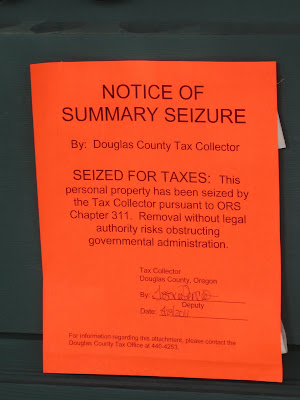 (doh!)
Luckily there was a deli across the street. 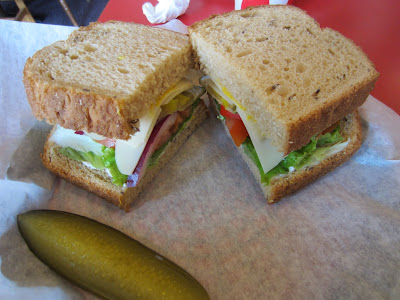 (Veggie sandwich on rye with a really salty pickle)
We were en route to the peacocks we'd seen the last time we were through this way. When he heard where we were heading, the man that owned the deli gave us some bread to feed the peacocks.

The peacocks loved the bread and even the babies came out to play. 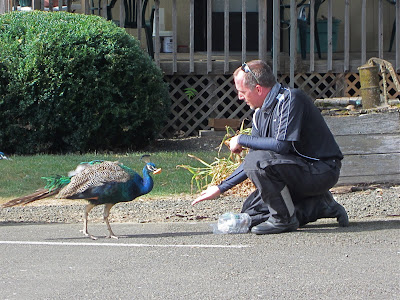 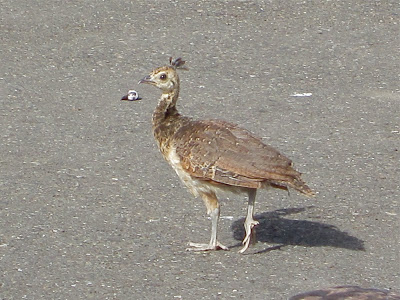 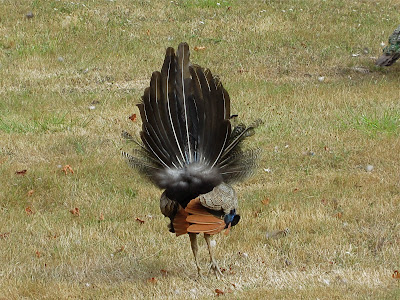 (This one wasn't amused - we'd ran out of bread)
Back on the road we headed North then West into Yoncalla and North again to Drain. From Drain we headed towards I-5 so that we could meet up with Territorial once again. We were thinking we needed ice cream. A stop near Loraine to check the GPS and get directions from a local and we were heading to Creswell on Hamm Rd. Wow, what an awesome set of twisties with nice smooth pavement.

Once in Creswell we found the Old Time Scoops. What a great little find this place turned out to be. And deserted on a Saturday evening too. 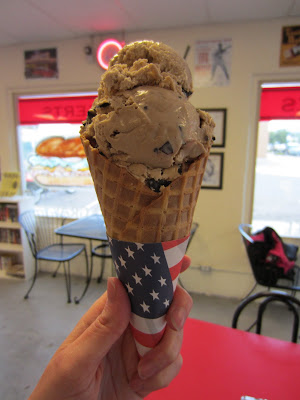 (My coffee espresso chip ice cream - this is a single) 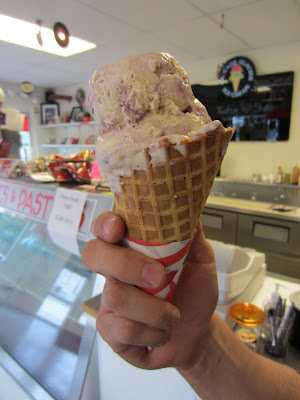 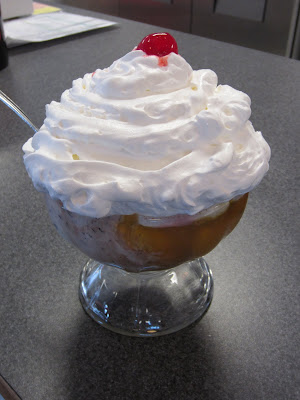 (Josh opted for the butterscotch Sundae - the pic doesn't do the size justice)
For some reason I didn't get a picture of Meg's bowl of ice cream. Next time.

With our bellies full we headed back the direction we came. The twisty road beckoned one more time. At one point in a 15 mph corner I glanced down at my speedometer and it read 35 mph indicated. This was a highlight for me. My cornering has really improved this summer and I hope to keep that momentum going and keep improving.

We were hoping to make it home before dark but the ice cream stop put us a little behind. Priorities you know. Our last half hour was in the dark but luckily it was a straight shot and Troubadour could lead the way.

We left the house at 8 am that morning and arrived home at 8 pm that night. It was an awesome day and I have to admit one of the best we've had on two wheels. It was full of sunshine, twisty deserted roads and good company with a great sense of humor. Josh and Meg were great riding partners and we look forward to our next adventure with them.
* * * * * * * *
I have been noticing a few things in regards to Max as I put more miles on it......
1) I find it really handles nicely around corners and is much smoother than the TU was especially at highway speeds with a headwind. Crosswinds are more manageable as well.

2) I am getting the handlebars sorted out as I was getting right forearm/wrist pain. The original position seemed to be a little off so we raised them a bit. Turned them forward, not bar risers. We did this before the Wolf Creek trip. They seemed to be better but my hands were falling asleep because they were a little higher. Before the Crater Lake trip we lowered them back down and actually put them a smidgen lower than stock. Still a little discomfort but not as bad. I am thinking because the seat angles me forward and with the bumpy roads I am always pushing against my wrists to hold myself up even though I try to use my core muscles. Either that or it is the vibration.

3) The suspension is quite stiff and throws me around a lot on bumps. Something I never really noticed with the TU.

4) The throttle is a little snatchy at low speeds. First and second gear are particularly bad with the fuel injection. You need to be really gentle in rolling on and off the throttle. This is most noticeable when trying to adjust your hands on the grips at low speeds. I am getting used to it and often don't notice it except when adjusting my grip. I am sure it looks funny as it lurches.

Don't get my wrong. I love the bike. I love the look, the fit and finish and love having power ready at the throttle when needed. I am just trying to get it all sorted out as it is still fairly new. Did I mention I love the bike?

- Au Revoir
" Love is an act of endless forgiveness, a tender look which becomes a habit." ~ Peter Ustinov
.
Posted by Trobairitz at 6:35 PM