How and Why I Got Into Motorbikes....

.
Gary over at Flies in Your Teeth put forth a question this week:

"I have read a few motorcycling blogs recently that I haven't seen before. With almost all of them, I was left wondering how the authors of those blogs initially got into biking, and why?............ I would like to know your reasons, so if you want to participate in this, then write something on your own blog about 'How and Why I got into Motorbikes'."
* * * * * * * * *
HOW TROBAIRITZ GOT INTO RIDING MOTORBIKES:

I can sum up how I got into motorbikes in three words:

"It's Troubadour's fault".
All kidding aside, I do have to say he is the reason I started riding. Without his love, support and encouragement I probably would not be riding today. So thank you Troubadour, there is a homemade vegan pumpkin cheesecake cooling in the kitchen with your name on it.

Prior to meeting Troubadour I'd only ever ridden pillion behind my mom. When I was a kid I'd ride behind her on her Honda trail bike. She made a cushion to fit over the luggage rack on the back of the bike for me. I am pretty sure I have posted a pic of her bike before but here it is again. 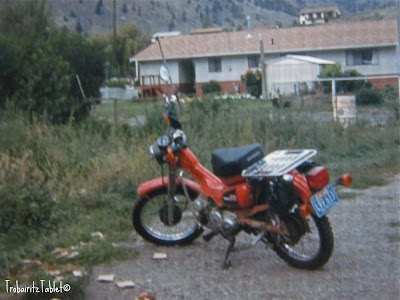 Later she moved on to a larger Honda and then a Harley Sportster. I only rode on the back of the Harley once (and it broke down mid-ride) and I don't think I was ever on her other Honda.

Somewhere along the way I developed a healthy dose of respect for motorcycles. I don't know if I'd go as far as to say fear, but let's call it respect.

I find it odd that so many moto-bloggers have documented that after they got married they sold their bikes or didn't ride for many years. Odd to me because Troubadour did not own a motorcycle when we met back in 1994. He didn't buy one until after we were married.

I believe that I had such a high level of trust in him that after getting over a bit of hesitancy I enjoyed riding on the back. I learned the proper way to "sit down, shut up, and hold on" and it has served me well for many many years of pillion riding.

Learning to ride a motorcycle had always been a goal for me. It was something that I wanted to do, but again, without Troubadour and his encouragement and patience I don't think I would have ventured it.

We moved to Oregon in January 2001 and in the spring/summer of 2002 I took my written test for my motorcycle learner's permit. We went out to the local high school two-up on his 1976 Kawasaki KZ900. It was there that he taught me the basics. A lot I'd picked up from riding on the back for several years. I knew the controls and their functions. He had me doing circles around the parking lot before too long and I was grinning like crazy especially the first time I shifted into second gear. 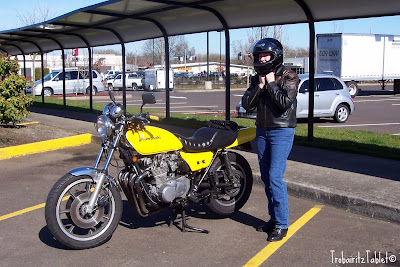 (Me and the KZ - sorry it was before ATGATT)
I was apprehensive, but I took the Team Oregon Basic Riders Training Course that fall in the pouring rain. After taking the course on such small, forward control bikes I felt uncomfortable getting back on the KZ. (and by small, I mean for my long legs toilet seats are taller than those bike seats) After those bikes, the KZ felt top heavy and too big, whereas before taking the course I was perfectly comfortable on it. I found this very frustrating.

Through it all Troubadour has repeatedly asked me: "What would you do if you weren't scared?" I chanted this in my helmet during the class and I still repeat it to myself any day that I am trying something new that I am not sure of. (I think I even said it as we were riding around Crater Lake this year.)

The following summer we bought our first house. After 3 years of renovations and landscaping we sold it in 2006 and bought the house we currently own. After a complete bathroom remodel and a complete kitchen remodel (100% of the labor done ourselves) and buying Troubadour his new America, we had some extra funds to look for a used bike for me.

And that is how I got into motorbikes. From that day it has only gotten better. It took me a few bikes to find one that suited me and to find my groove, but I love motorcycling and love that instead of staying home or riding on the back all the time I get to ride my own ride. In fact, I think riding my own motorcycle has made me a worse passenger; no handlebar to hang onto, no heated grips, etc.
* * * * * * * * *
WHY I RIDE A MOTORCYCLE: Well, that's easy:

"Life is better with a motorcycle."
Every year we ride a little further and more often, and I still look forward to all the touring we'll do together in the future.

In our case "a couple that rides together stays together."
- Au Revoir
"It takes more love to share a saddle than it does to share a bed." - Author Unknown
.
Posted by Trobairitz at 3:55 PM