Soupy Fields and Soup for Dinner

.
Our weather hasn't been conducive to riding lately, although we have seen the sunshine in sporadic bursts.
Saturday after coffee Troubadour headed to the range to teach/intern another Team Oregon class and I headed to Salem in the car.  It was time for a Costco run.  We were almost out of their in-house roasted coffee.
I decided to take the backs roads as I was not in the mood to fight heavy traffic on the interstate.  Meandering along Independence highway allowed me to stop and take a few pictures of the flooding.

A little further and I made a right turn to the East and headed over the river to a favorite twisty road.  I was stopped short by this sight.

After snapping a pic I did a u-turn and headed further North then East onto Highway 22 before I could cross the river into Salem.
I stopped at Costco and Lowe's and a few other places.  I was shopped out by early afternoon.  The people in the stores were driving me nuts.  I am not good with crowds. The lack of common courtesy with the general public these days has a tendency to piss me off and give me tourettes.  I know when to call it quits.
I decided to head for Starbucks and then go home.  I had to dig the trusty GPS out of the center console and click on favorites until I found the Starbucks I wanted.  With an iced soy latte safely ensconced in the cup holder I pointed the Subaru towards home.
The weather could not make up it's mind on Saturday.  Sunny, rain, sunny, rain.  It made for some interesting clouds heading home on Highway 99W.

I got home and put everything away and Troubadour sent me a text and let me know he was on his way home.  With being outside in the elements all afternoon I figured he needed a big bowl of soup for dinner.
One of the benefits of a cool wet spring is that soup season has been extended.
I decided on one of our favorites; potato onion soup.  Not a traditional potato soup.  It is lighter and we like it better.

When the potatoes are soft - about 15 minutes I break them into smaller pieces using a spoon or potato masher. 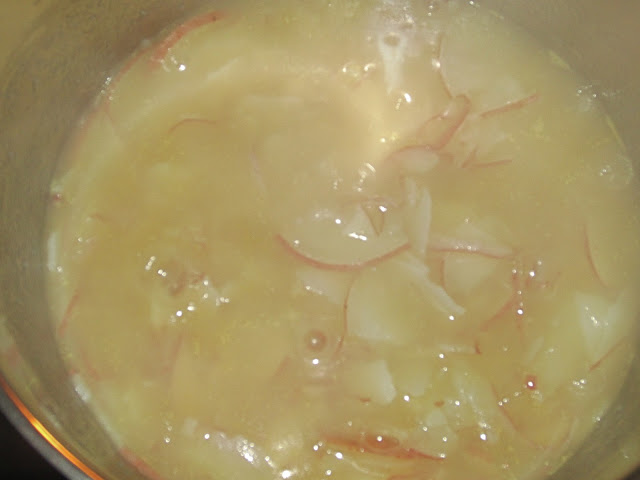 When the potatoes are soft and the onions cooked, add the onions to the potato mixture as well as 2 cups of soy milk (or cow's milk).  Add fresh ground pepper to taste  and voila.

The original recipe calls for cooking bacon then sauteing the onions in the bacon drippings, but I use a little liquid smoke for the same flavor boost to the onions and then top with a few soy bacon bits instead.  I also substitute unsweetened soy milk for the moo cow milk.
The recipe makes 4 big bowls.  We ate it Saturday night and then had the leftovers for dinner on Sunday.
Here is the complete recipe:
Potato Onion Soup
6 slices of Bacon (optional - can use liquid smoke instead)
5 cups sliced Red Potatoes
3 cups Water
1 Tbsp instant chicken bouillon (I used Better than Bouillon vegan no-chicken base)
3 medium Onions, sliced thin
2 cups Milk (or unsweetened soy milk)
Fresh ground black pepper to taste
** Sour cream, green onions, shredded cheddar, and bacon bits are optional for toppings.
1.  In large skillet cook bacon over medium heat until crisp.  Remove bacon, reserving 1 tablespoon of drippings in skillet.  Drain bacon on paper towel.  Crumble bacon and set aside.
2.  In large saucepan/stockpot combine water, bouillon, and sliced potatoes. Bring to a boil and reduce heat. Simmer covered about 15 minutes until potatoes are tender.
3.  Meanwhile cooked sliced onions in reserved bacon drippings over medium-low heat for 8-10 minutes or until tender and golden.
4.  Do not drain potatoes.  Use a spoon or masher to break potatoes into smaller pieces.  Stir in bacon, onions, milk and pepper and heat through.  If desired season to taste with additional pepper.
- Bon Appetit
"Only the pure in heart can make a good soup." - Ludwig Von Beethoven
.
Posted by Trobairitz at 8:20 PM