What goes up must come down.....
HANDLEBARS:
After posting last week about the Rox bar risers we decided to install them Sunday afternoon.  The garage is unheated and the floor is really cold so the first thing we had to do was put on some boots.
I figured I'd best take a before picture of the handlebars in the stock position. 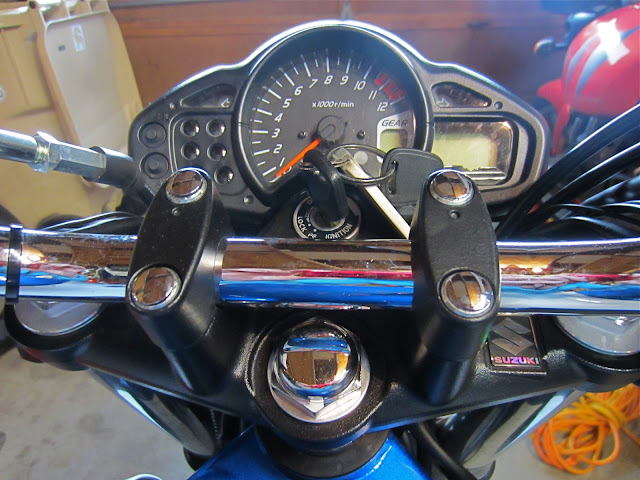 We picked the little chrome colored  hex nut covers off and I unscrewed the stock clamps. Troubadour graciously held the handlebars up for me. 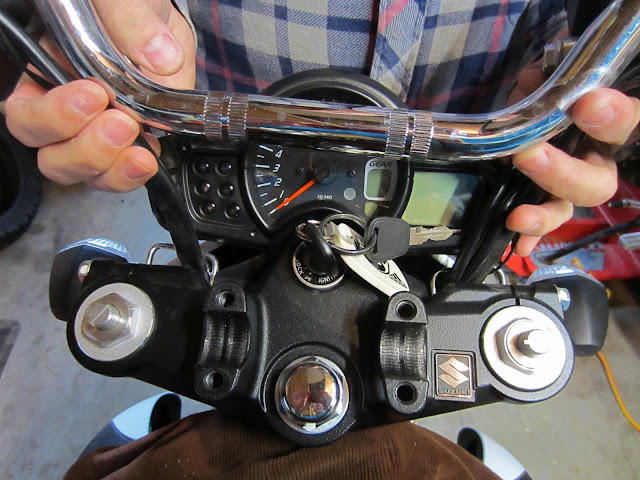 I installed the base of the 2" Rox risers and Troubadour slid the handlebar on top. 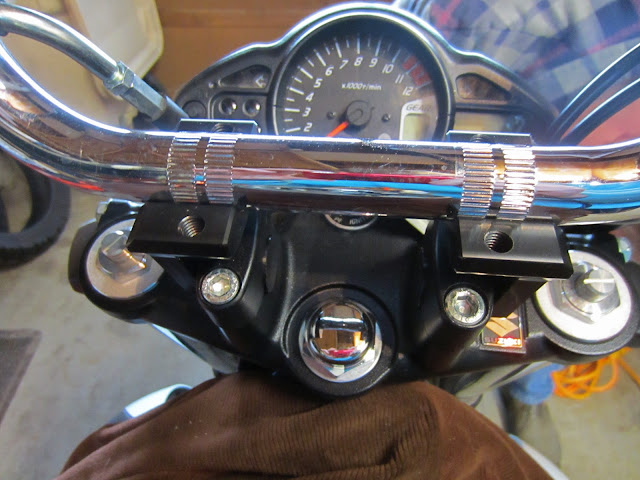 I thought it was a good sign that the cables and lines were long enough for the bars to be placed on top the risers, but we still needed more room to rotate the handlebar into position.  As it was, the brake and clutch levers and hand guards were facing the floor.  To try and gain a little more wiggle room we had to lift the tank which also entailed first removing the seat and the white side covers.  It is nice that the Gladius comes with a pivoting tank and a prop stick. 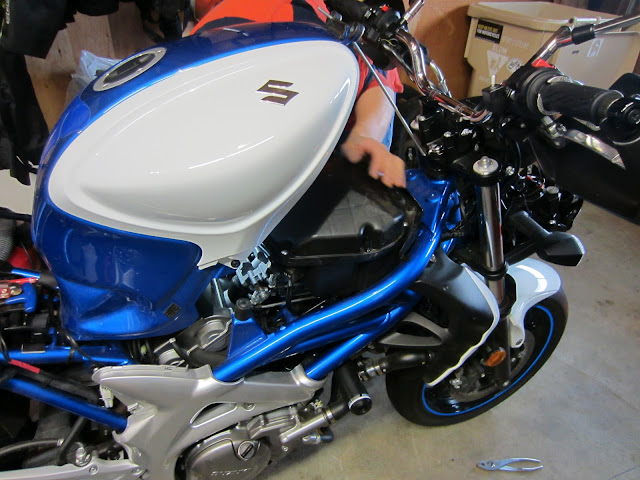 You can't really tell in that photo but the headlight has been flipped forward too.  It is nice that you can undo a few screws and it just leans forward.
This photo is taken from the front looking under the tank.  Oh look an air box. 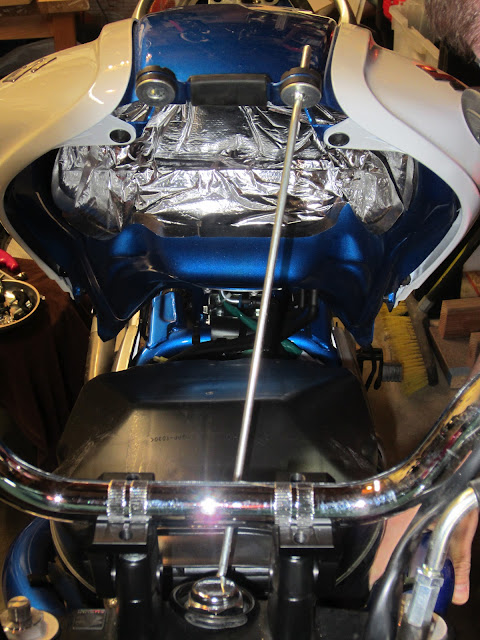 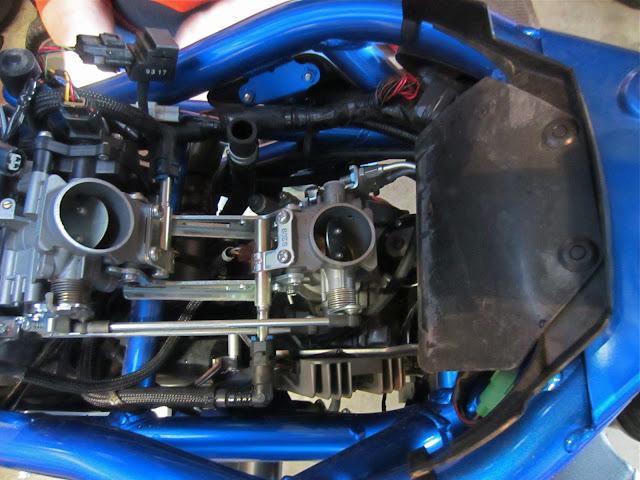 We loosened as many zip ties (aka cable ties or zap straps) as we could but still the clutch cable was not long enough and the throttle cables were too short so when we tried to rotate the handlebar they would pull on the throttle body.  Not a good sign. 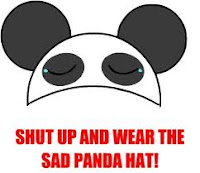 We decided it was just too much hassle to special order new longer lines so we were just going to put it all back together the way it was.  Cue a Sad Panda face.
It did give us (and by us I mean Troubadour) a chance to check the air filter.  It was nice and clean.  Unfortunately the oil has a little condensation in it but Max is due for an oil change anyway.
Rather than standing around watching Troubadour reassemble everything I decided to make myself useful and went back inside.  By the time he had everything together I had a late lunch ready for him. A nice batch of homemade broccoli soup made from scratch.  Yumm.  Sorry, no pics, we were too hungry.
The handlebars went up........the handlebars came back down.

WATER VAPOR:
The water vapor has been going up and subsequently has been coming back down as rain.  Copious amounts of rain.  This time around it has been raining for two days straight.
I am sure everyone has heard those of us in the Pacific Northwest complaining of the rain this year (in between snow storms of course).  To put it into perspective I thought I'd give you some statistics published in our local newspaper this morning.  The title of the article was "Heavy rain expected; flood advisory in effect."
From last night until tomorrow morning we are to expect between 1.5" to 2" (3 to 5 cm) of rain here on the valley floor with up to 4" (10 cm) falling on the coastal mountain range.  That doesn't sound so bad until you hear some other figures.

The Hyslop weather station between Albany and Corvallis has recorded 8.78" (22.30 cm) of rain between March 1st and March 28th.  Our average rainfall for March is only 4.24" (10.76 cm) so we have more than doubled our average and still have one more day to go. 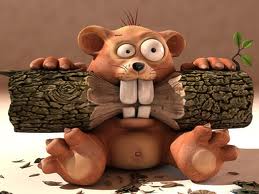 Our average rainfall from January 1st through March is 16.10" (40.89 cm).  Last year we received only 14.73" (37.41 cm) through March.  This year Mother Nature raised her middle finger at averages and sent us a whopping 23.82" (60.50 cm) of rain in the first three months of the year. We've slogged through over 7" (17.78 cm) of extra rain and our seven day forecast shows nothing but more rain.  Is it any wonder our official State animal is the beaver.
FYI - Be careful when on Google Images looking for a cute beaver picture - you never know what you'll see)
But on the upside - the grass is really green.  Too wet to mow and almost a foot tall in some sections, but nice and green. 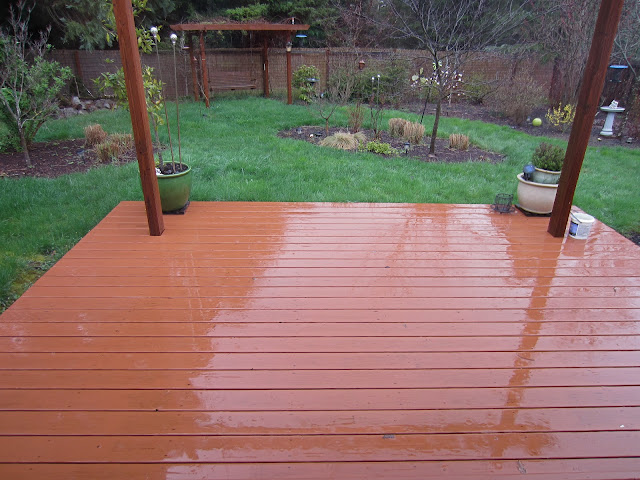 In the photo, just to the right of center in the back of the yard, you can just see our Star Magnolia trying it's best to bloom.  Unfortunately the blossoms are taking a beating from the rain as soon as they start to emerge.
Water vapor goes up......rain comes down.

- Au Revoir
"He was so benevolent, so merciful a man that, in his mistaken passion, he would have held an umbrella over a duck in a shower of rain." - Douglas William Jerrold
.
Posted by Trobairitz at 3:30 PM