A Wee Walk in the Woods

Last Friday, August 1st, we had the day off together with no real plans except to try to avoid the 95˚F (35˚C) heat.

Mid afternoon Troubadour and I decided to head northwest up Kings Valley to the Beazell Memorial Forest to scope it out for possible future mountain bike rides.  For some reason we thought it might be cooler in the forest - not if you wait until 3 pm - the hottest part of the day.

We have a book on hiking and mountain bike trails in and around Corvallis and Benton County. The book calls this area the gem of Benton County.  Maybe back in 2006 when the book was written, but last Friday it didn't seem to be a gem compared to other area parks.

As you pull into the area, you are greeted by the 1875 farm house of the Plunkett family; one of the oldest dwellings in Kings Valley.  The exterior has been restored to reflect its time period, but it is not open to the public.

Beyond the parking area and restroom facilities is the 1930's era barn.  The barn has been fully restored and is now a rentable park facility and forest education center.  It was not open the day we were there. 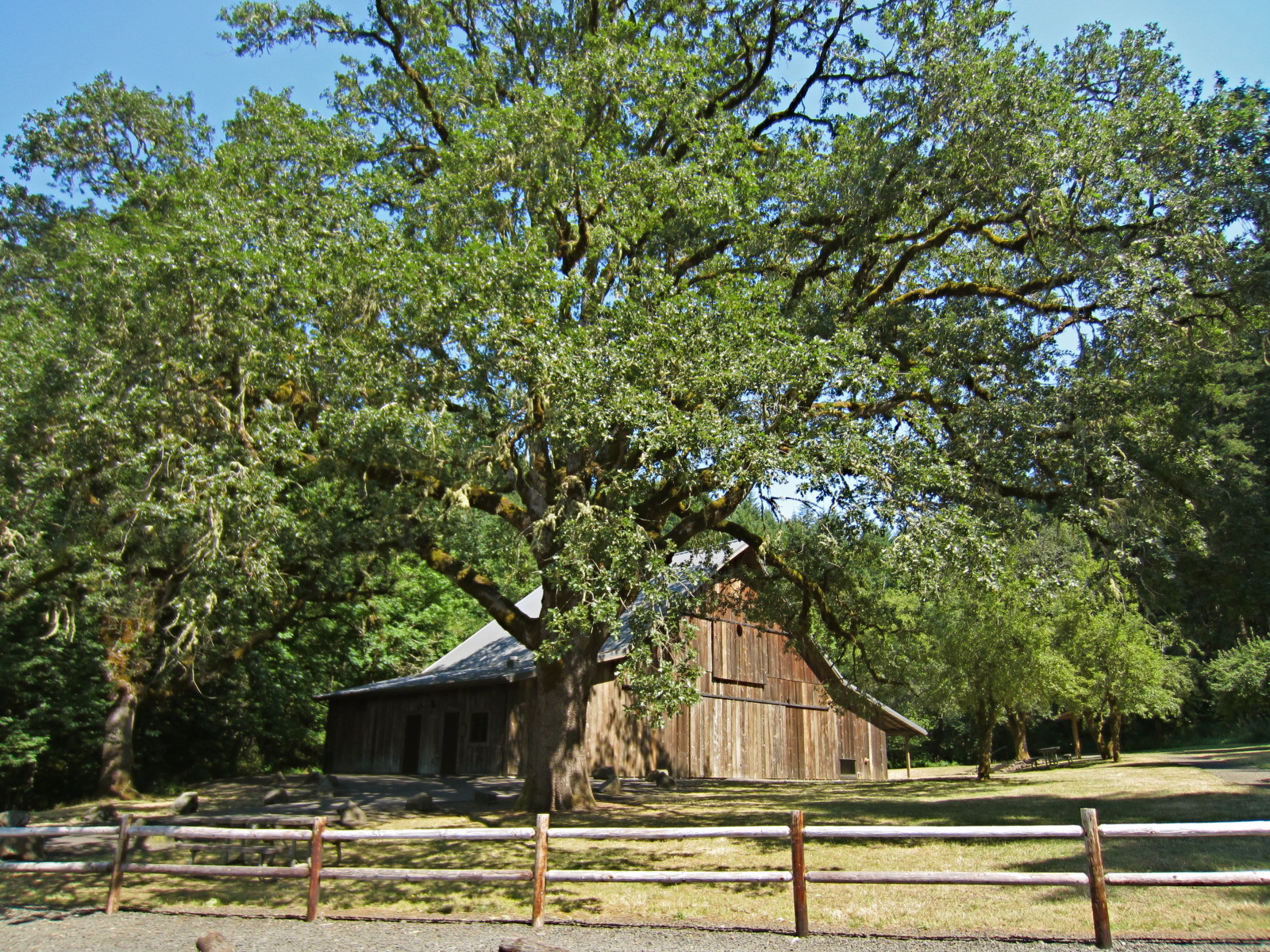 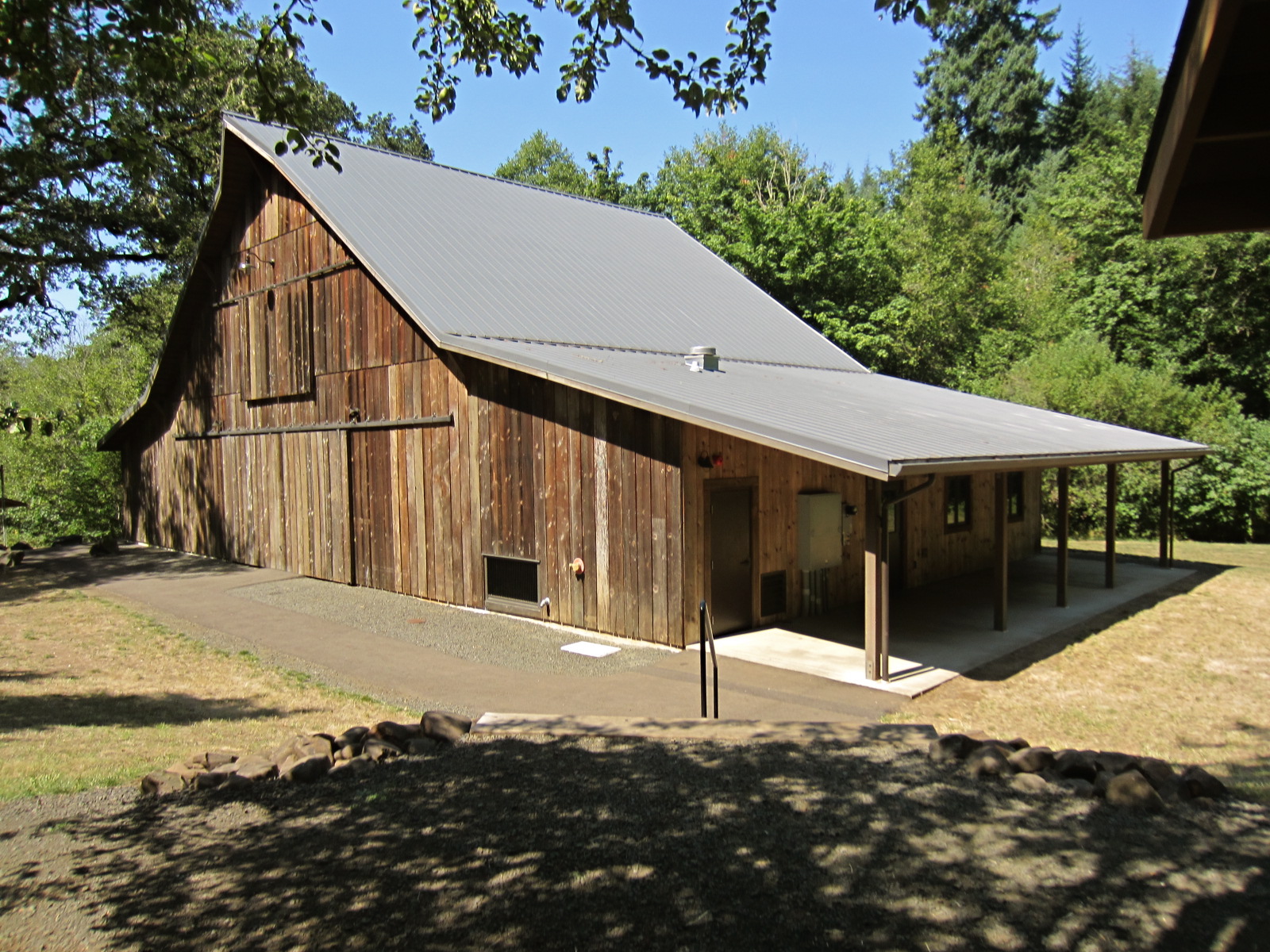 The park has several trails to choose from.  There is a short loop for bird watching, the Plunkett Creek Loop, the South Meadow Loop, and the South Ridge Loop. Several of them intertwine together to create a longer hike.  To view a trail map click this ----> LINK.  Click on the picture in link to make it larger.

We started on the Plunkett Creek Loop.  A nice walk in the woods except for the heat.  While it was shady beneath the canopy of the trees it was quite humid and sticky.  It felt more like a tropical jungle than an Oregon forest.

The trail was a nice wide path with a steady incline.  Several bridges crossed over Plunkett Creek. 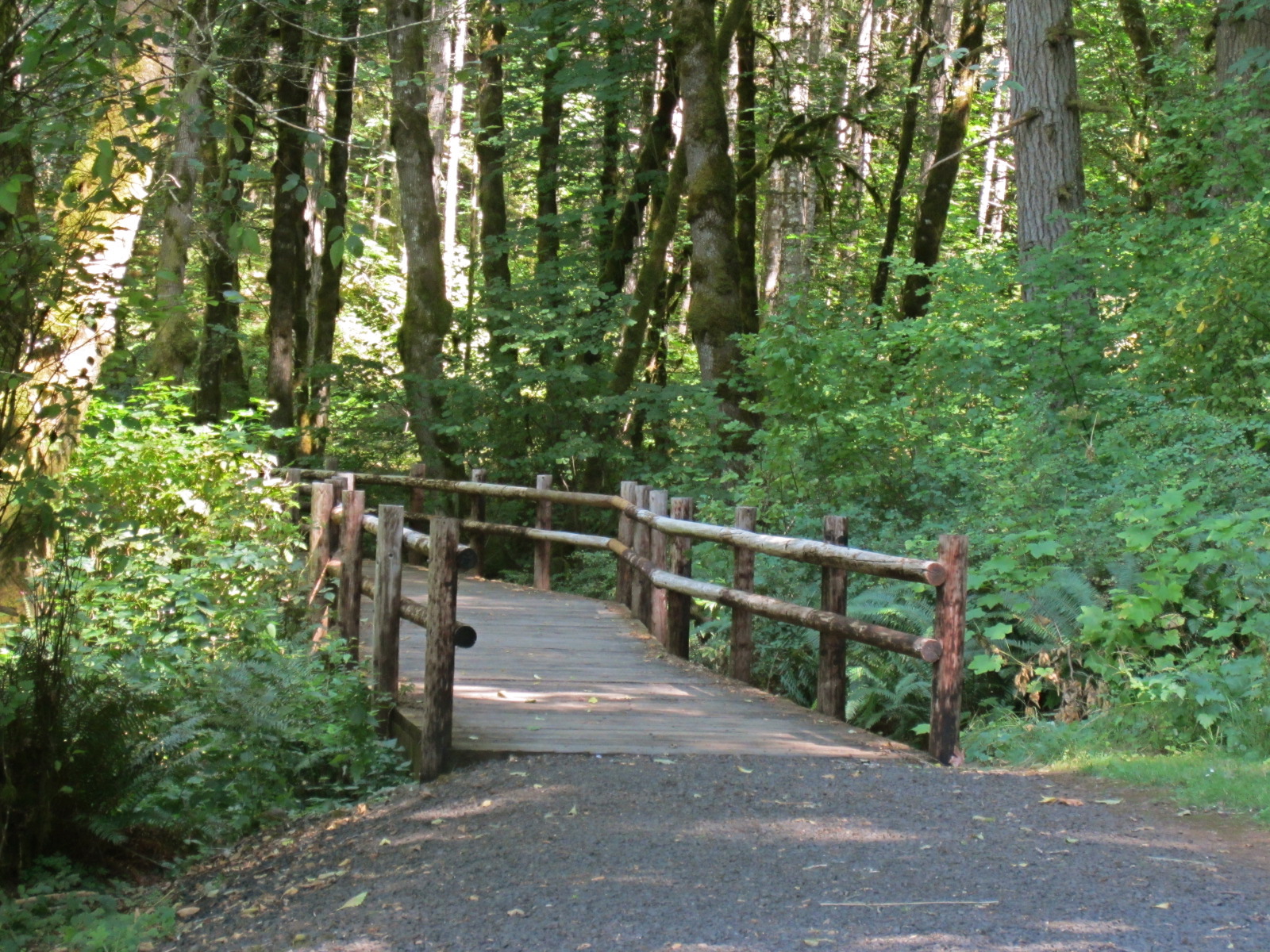 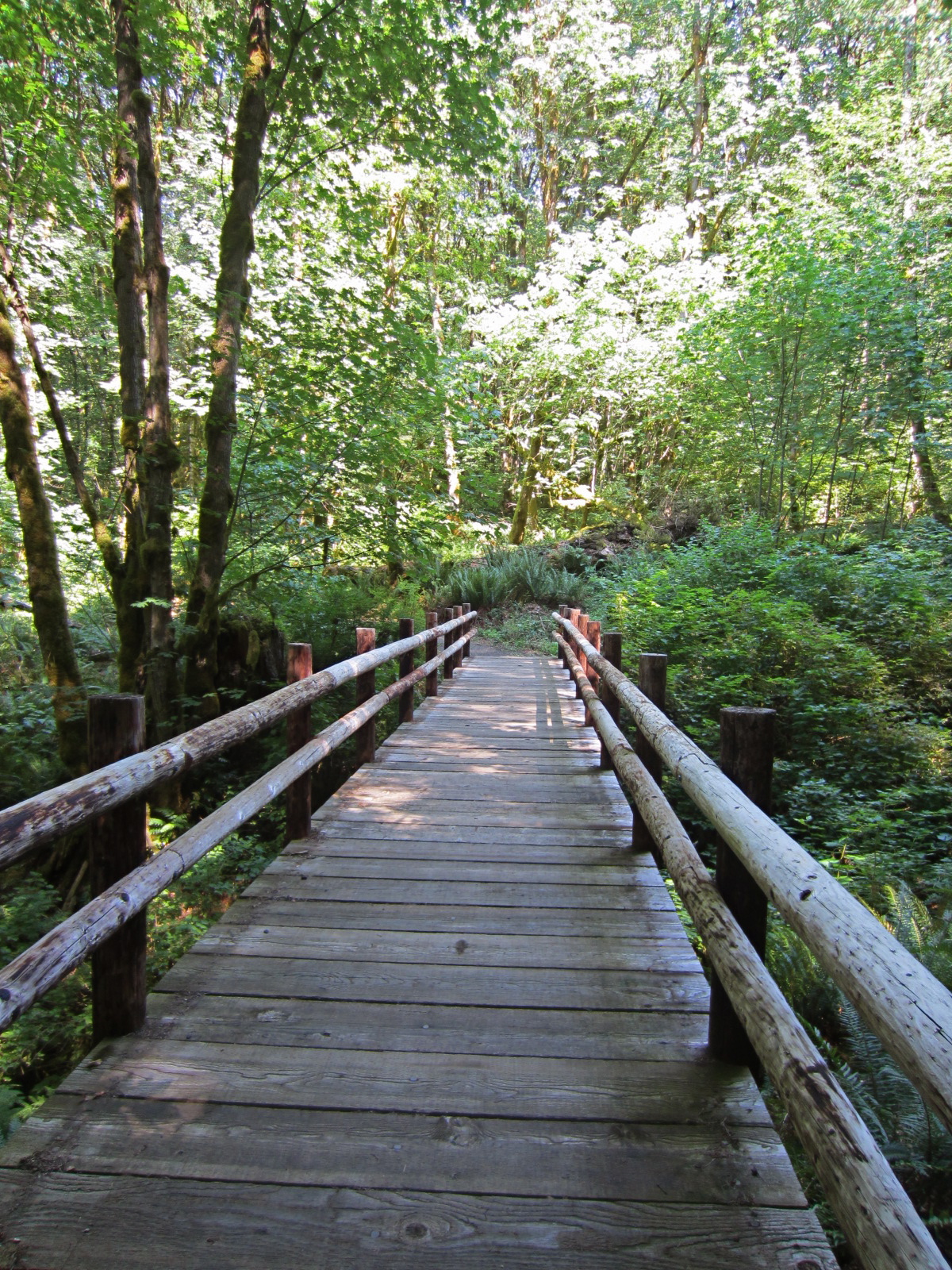 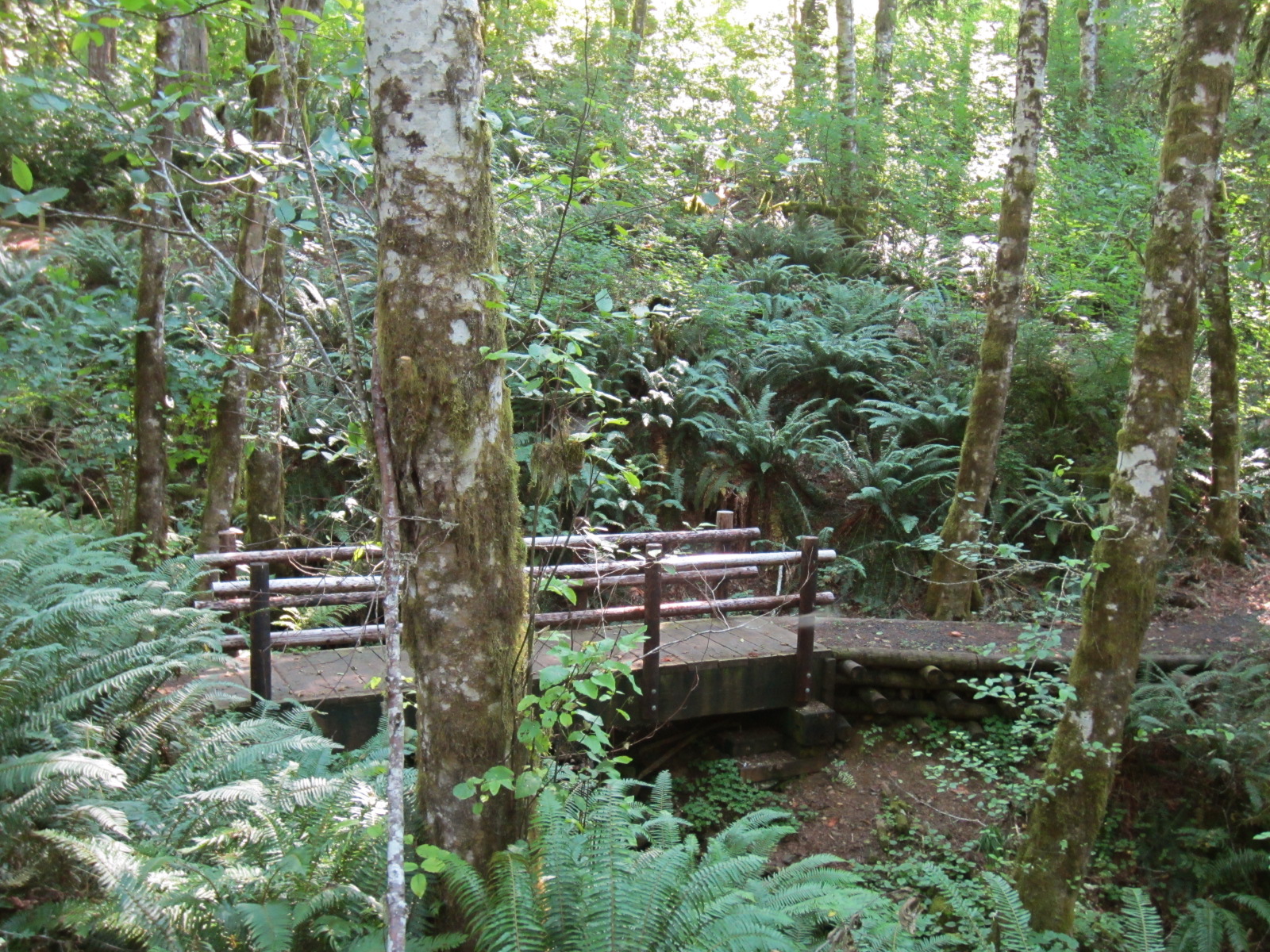 There wasn't much water in the creek. 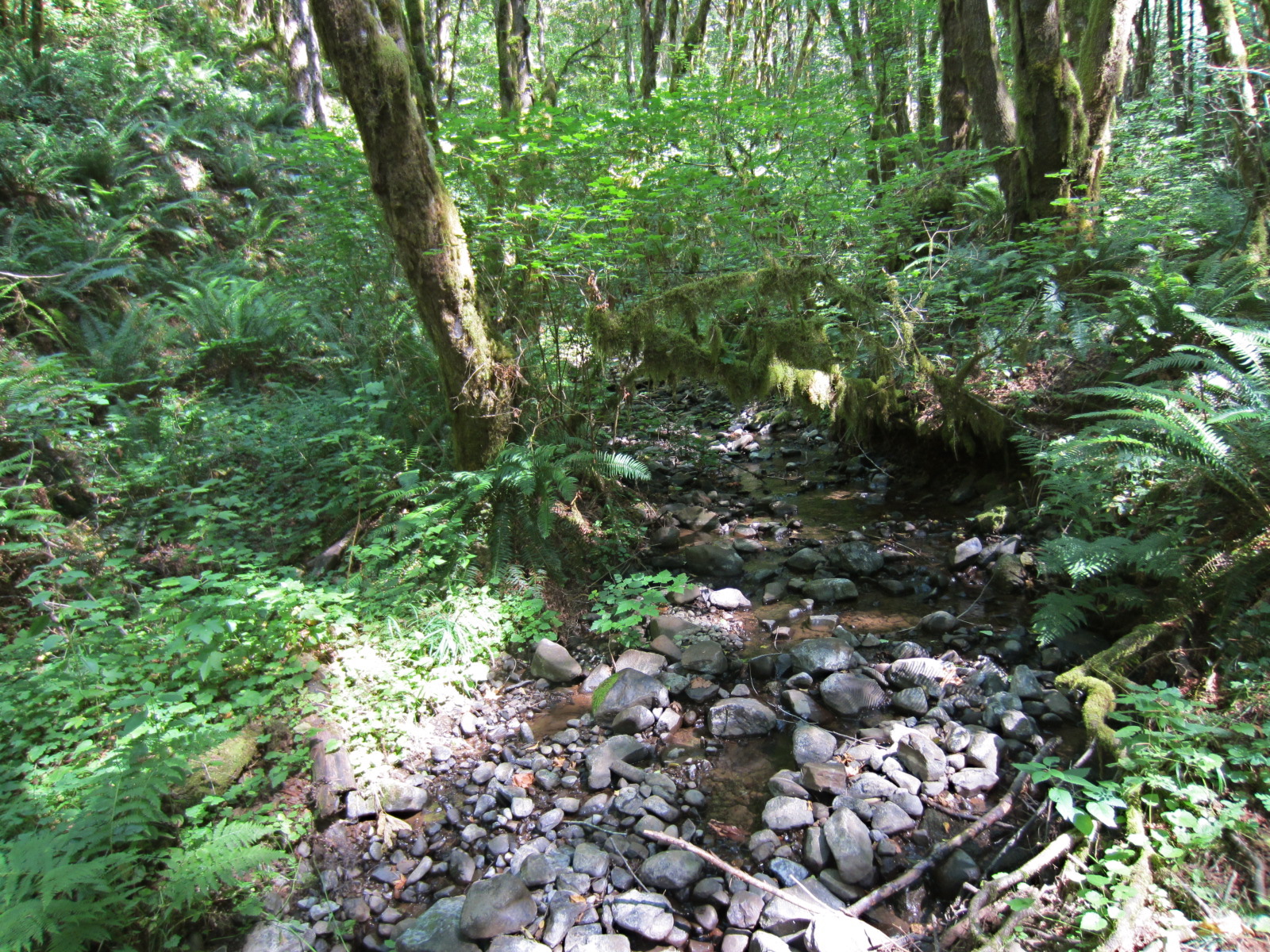 We reached the summit above the South Meadow where the trail opened up to a worn grassy road. 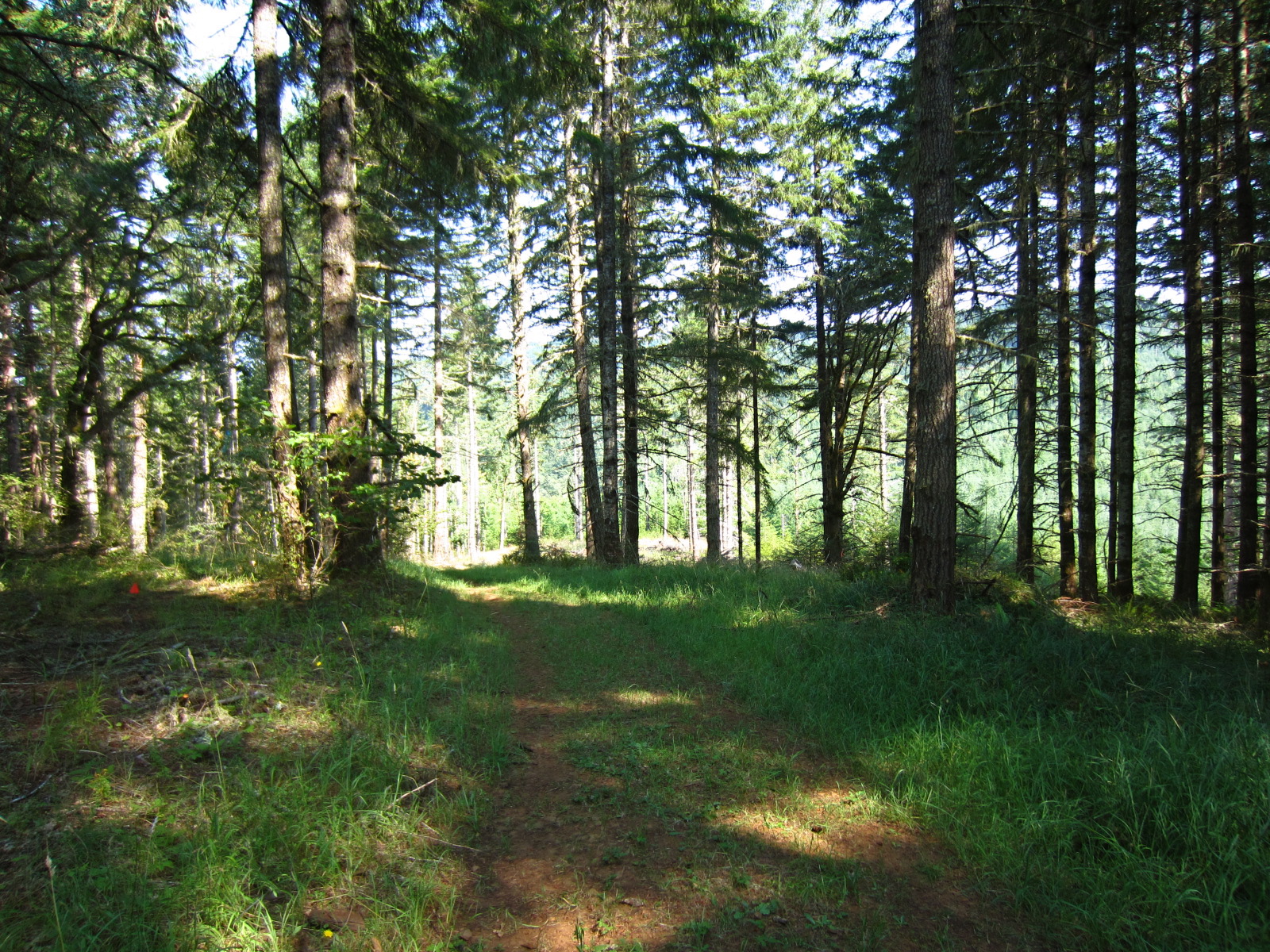 We took a short side loop to a viewpoint of Marys Peak.


There weren't many wildflowers, but the thistles were in bloom.


From here we took another small side loop where we saw a huge old fir tree.  I think it was past its glory days.  I posed beside it for size reference. 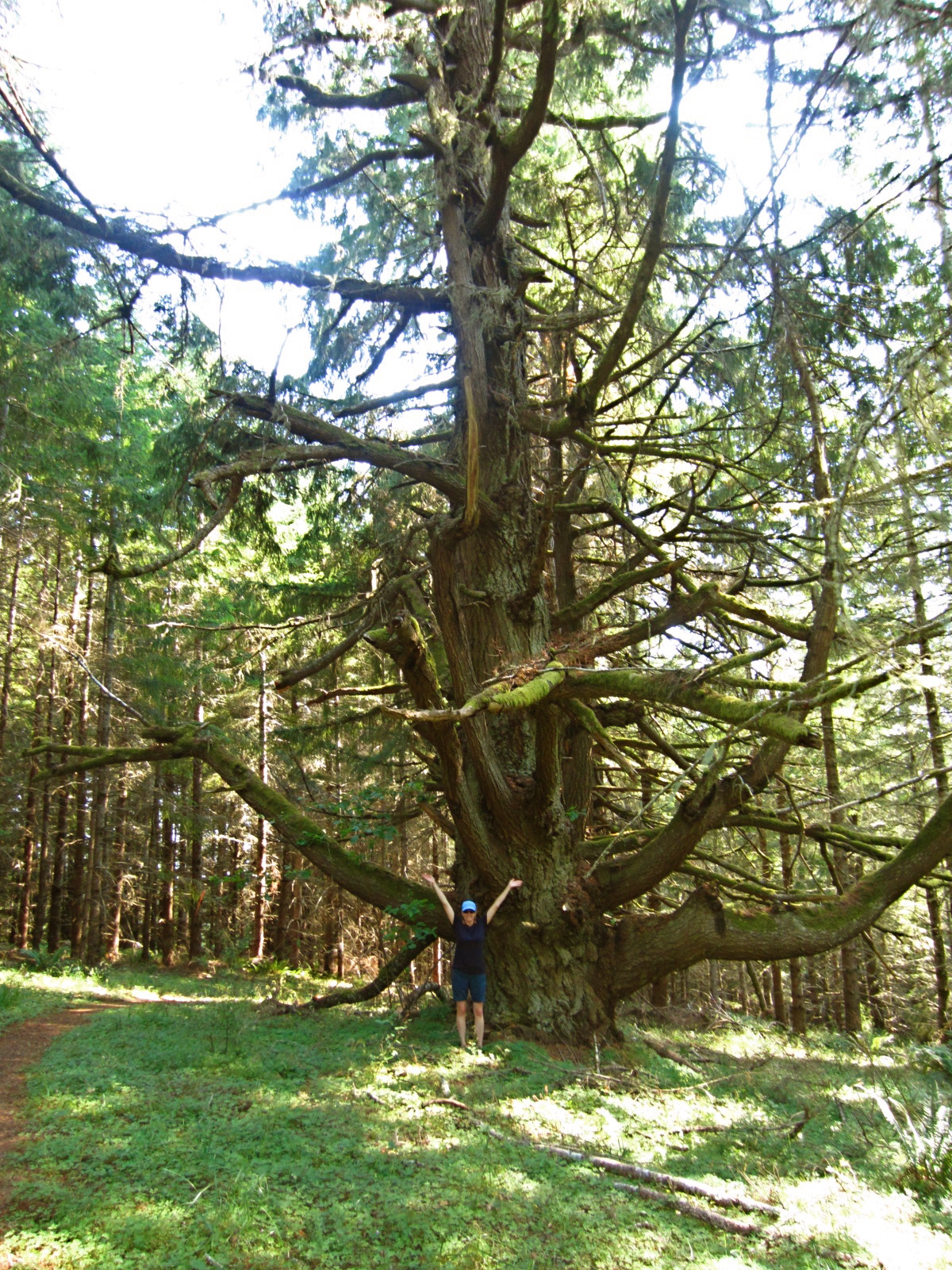 We finally started our descent.  The path became an old logging road of sorts, with huge patches of deep very large gravel. The walk down was not easy on the knees.

We were almost back at the barn when we saw a set of stairs that led up to a freshwater cistern. Water was flowing in from an unknown source through a small metal pipe only to overflow out the top. 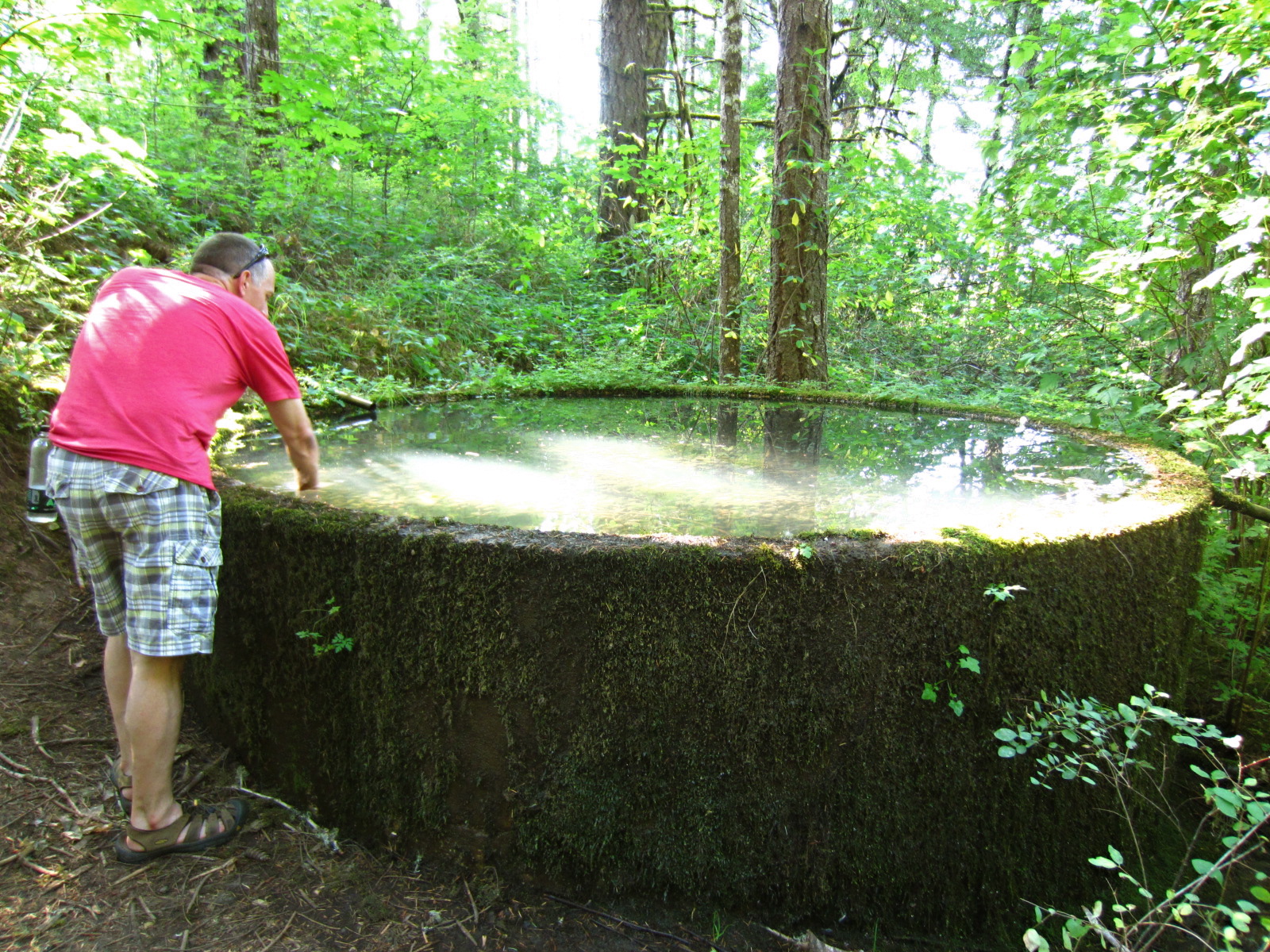 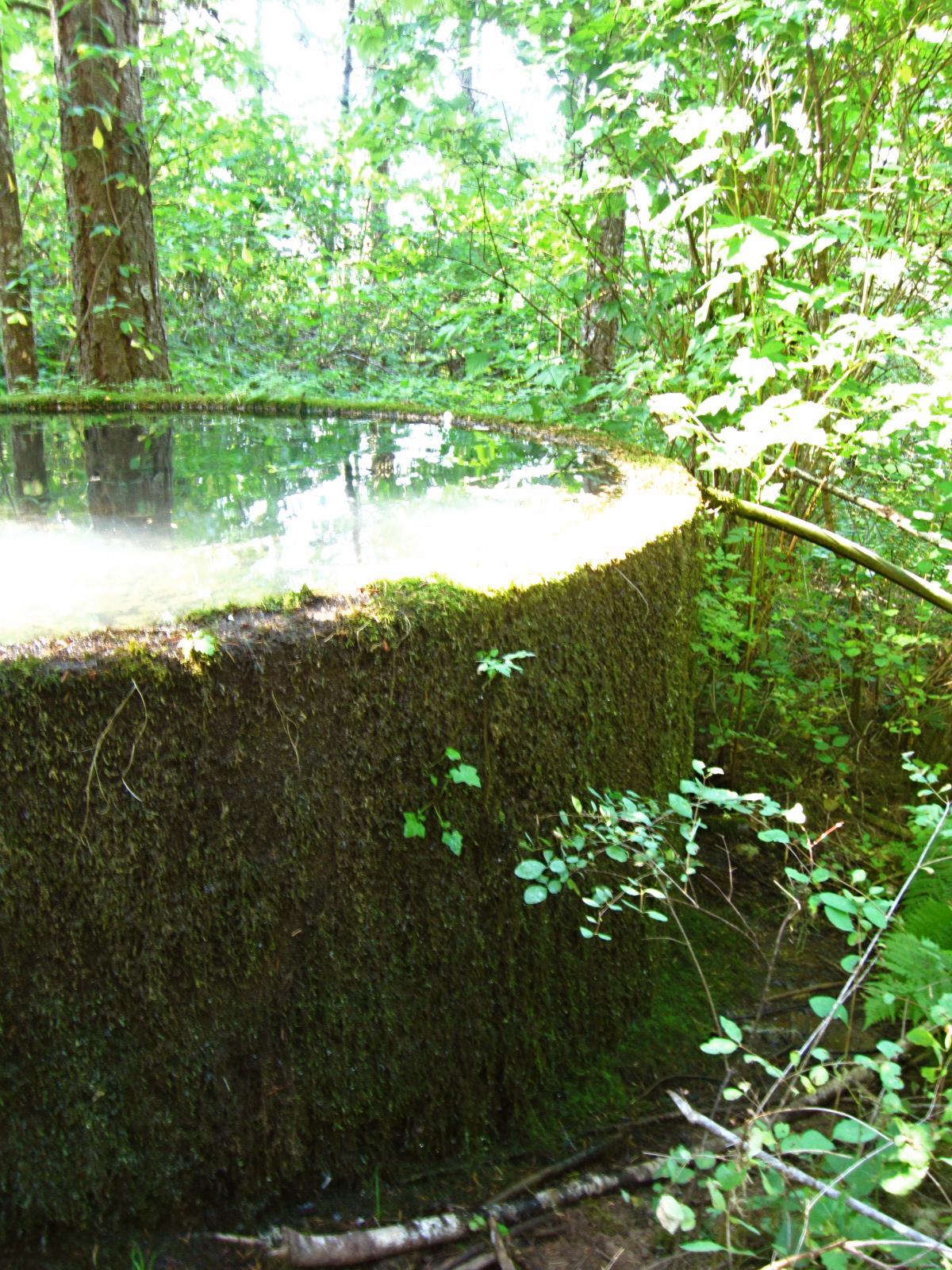 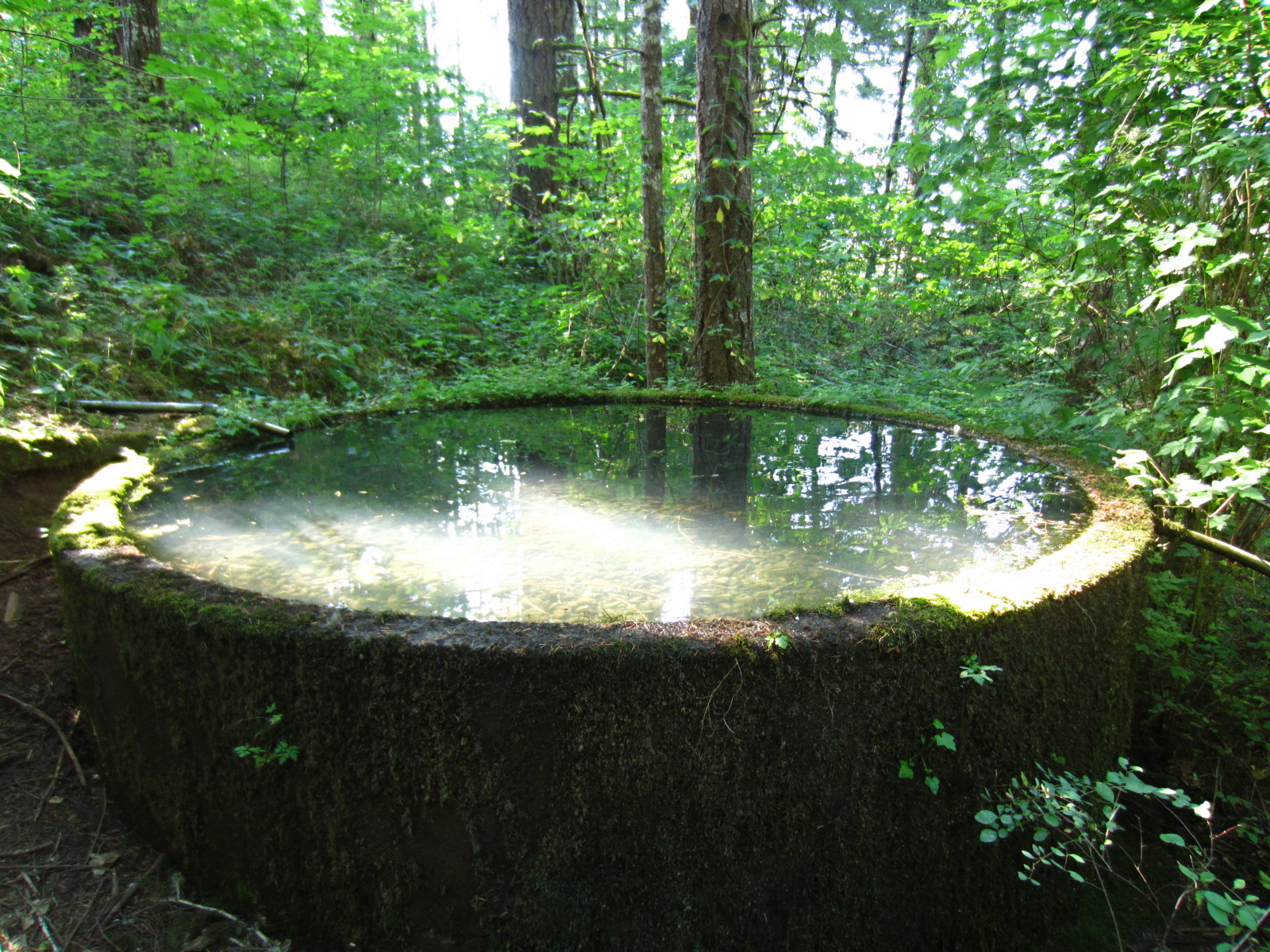 A few yards later we were back at the car.  We used the restroom, guzzled another bottle of water and enjoyed the air conditioning all the way home.

We were only gone for a few hours, but it was nice to get out of the house.  The heat from outdoors made the house seem a little cooler too.

Another 3-day weekend coming up and hubby doesn't have to teach.  We have plans to attend the Aerostich pop-up store in Portland tomorrow as well as do a little boot and goggle shopping in the city.  Sunday (our anniversary) we have plans to get dirty on two wheels with PolarBear and his wife SweetPea. Should be fun times.

"We shall not cease from exploration, and the end of all our exploring will be to arrive where we started and know the place for the first time." - T.S. Elliot
.
Posted by Trobairitz at 6:17 AM