Troubadour was teaching a Team Oregon class last weekend so our only day off together was Friday the 15th.  The weather forecast was for a high of only 84˚F (28.89˚), which sounded nice and cool compared the temperatures we've been experiencing this summer.  Perfect for tackling the Row River Trail out of Cottage Grove.

We first heard of the trail when in search of covered bridges back in May of this year.  We saw parts of the trail on our ride and knew we wanted to ride it on bicycles one day since it is closed to motorized vehicles.

We also saw the trail in the book we purchased - Kissing the Trail.  It was listed as one of the beginner trails.

The Row River Trail is a section of the abandoned Oregon Pacific and Eastern Railway Line that has been paved over.  It runs through a portion of the Umpqua National Forest and skirts the north side of Dorena Lake.  There are several trailheads along the way, but we chose the trailhead at Mosby Creek by the covered bridge.  This would give us a 26 mile (41.84 km) round trip ride. An alternate starting point would have been in Cottage Grove itself and would have added an additional 6 miles of total riding.  That stretch paralleled the highway along some residential areas so it didn't hold much appeal.

We arrived at the trailhead a little later than anticipated, had some lunch, and got on our way about 1:30 pm.  The trail is all paved and a nice easy pedal.

At the start it is fairly level and then there is a long gradual uphill grade to the dam on Dorena Lake.  To get to the dam we took a short gravel road up and over a knoll which dropped us right down on the dam.  We couldn't go across the dam as it was blocked with a fence and razor wire.

Pedaling around the north side of Dorena Lake afforded some beautiful views. There were a few forest trails that led to the waters edge and one actually had beach access. 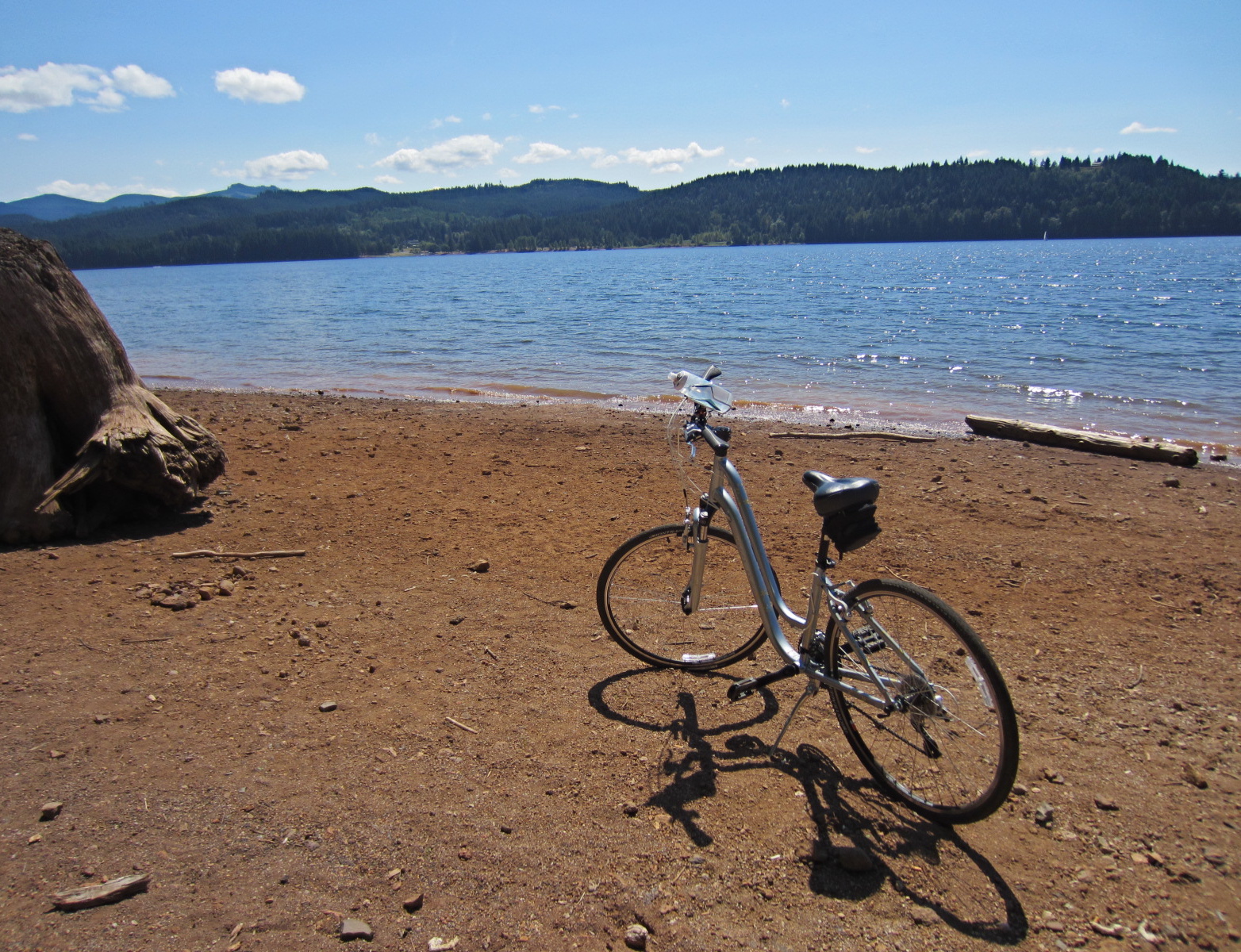 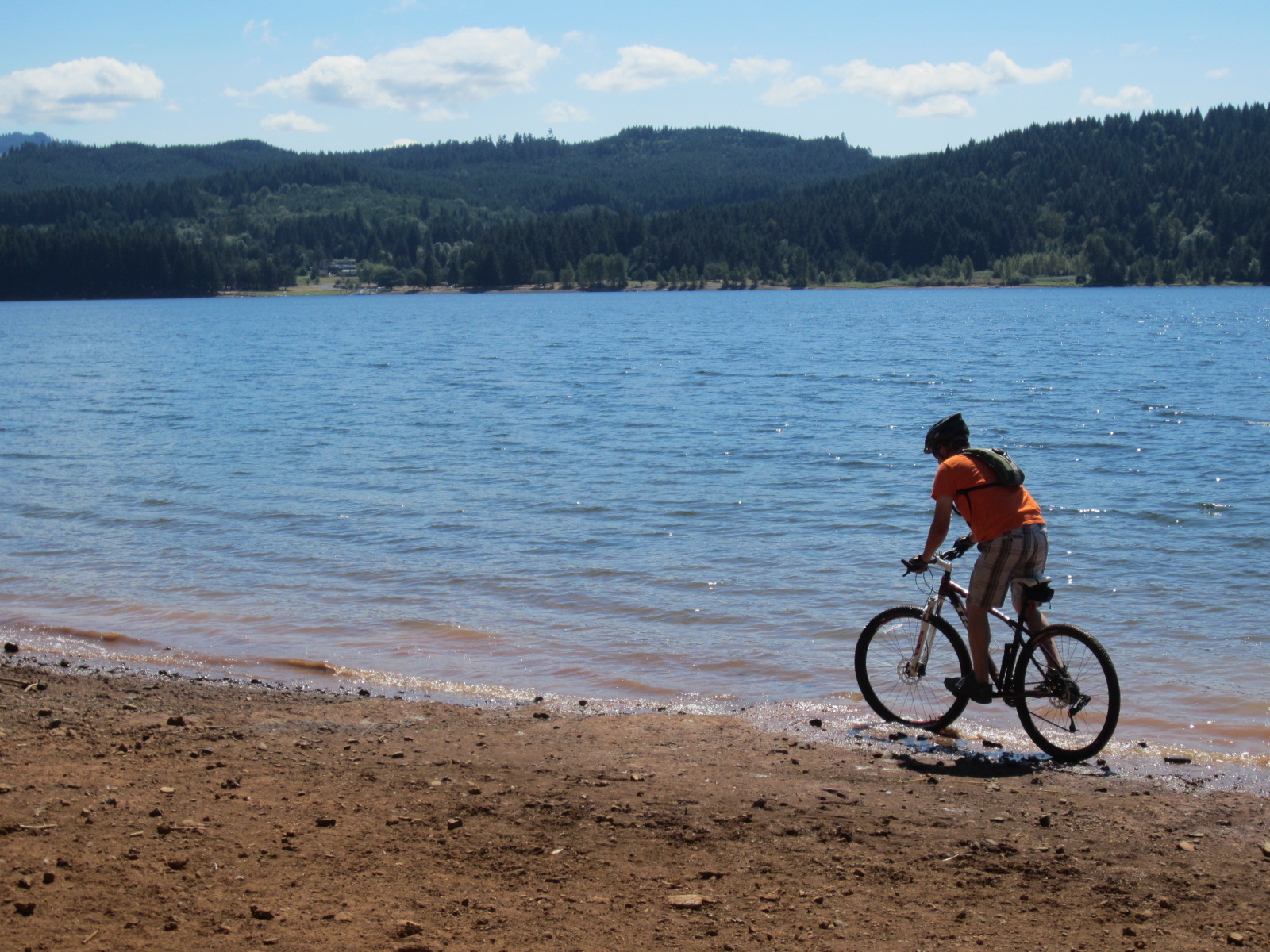 There was one area further down that a large gaggle of geese had claimed.  There were 2-3 grouping of them.


Part of the trail snaked through the beautiful Umpqua National Forest. And further towards the turn around point it meandered through pastureland full of cows, a few horses, and even old apple and plum trees lined the paths. 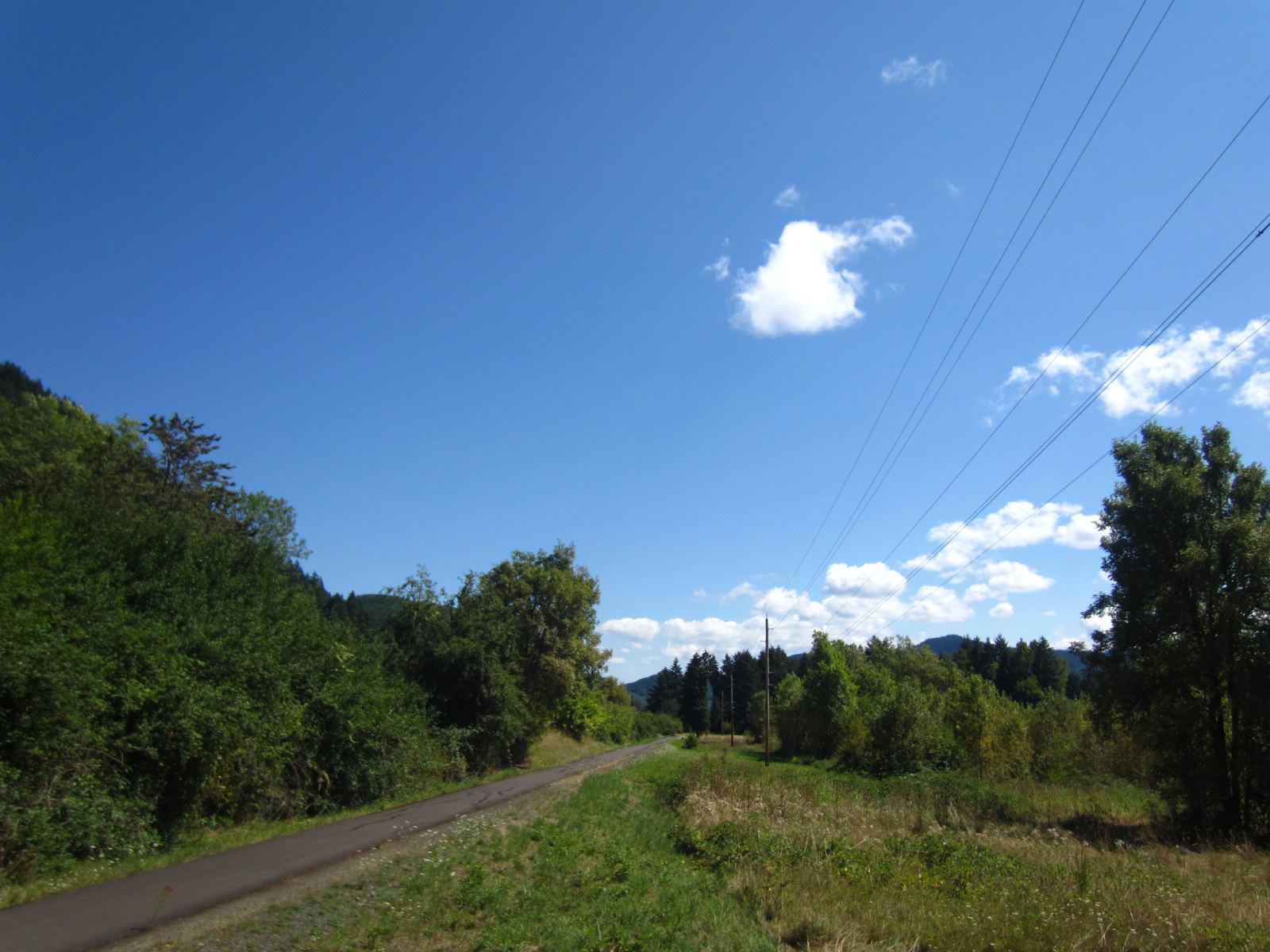 13 miles down.  We arrived at the turn around point.  The Culp Creek Trailhead.  No fanfare, nothing.  Just a gravel parking lot with one vehicle and a vault toilet stand.  Alrighty.  Head back, it is.


Now, all the way around the lake we'd been thinking we were riding on a slight uphill grade so we thought the 13 miles back to the car would be a little easier with a slight downhill grade.  We rode a little ways thinking out loud that we didn't remember that portion being downhill, so why were we now riding uphill?  And further uphill.

Oooh, did someone say plums.....  My favorite kind too - prune plums.

After eating our fill of fresh ripe plums (only 8-10 each) hubby picked a few more to bring home. We'd drank enough water from his Camelback that he could fold the top of the water bladder down and create room for plums in the pack.  Smart thinking.

The view from the plum trees looking back at a farm.  Nice red barn. On the way out I noticed a creek running into the lake and made a point of stopping on the way back. Of course the sun's position had changed so the lighting wasn't quite the same. 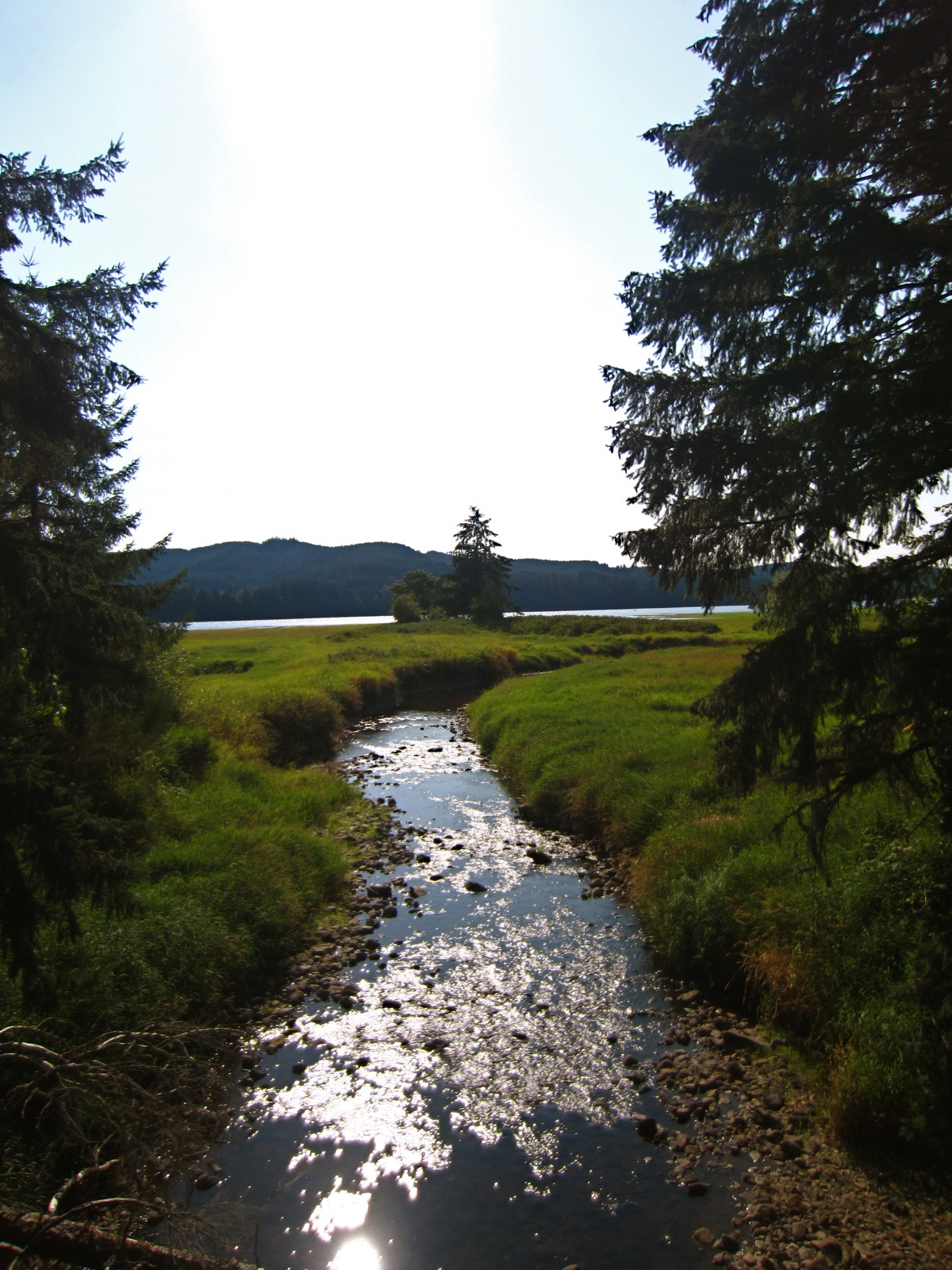 At another stop Troubadour took the following picture.  The dam is in the center of the photograph and we knew we had 3 miles to ride beyond that.  Still riding uphill.... 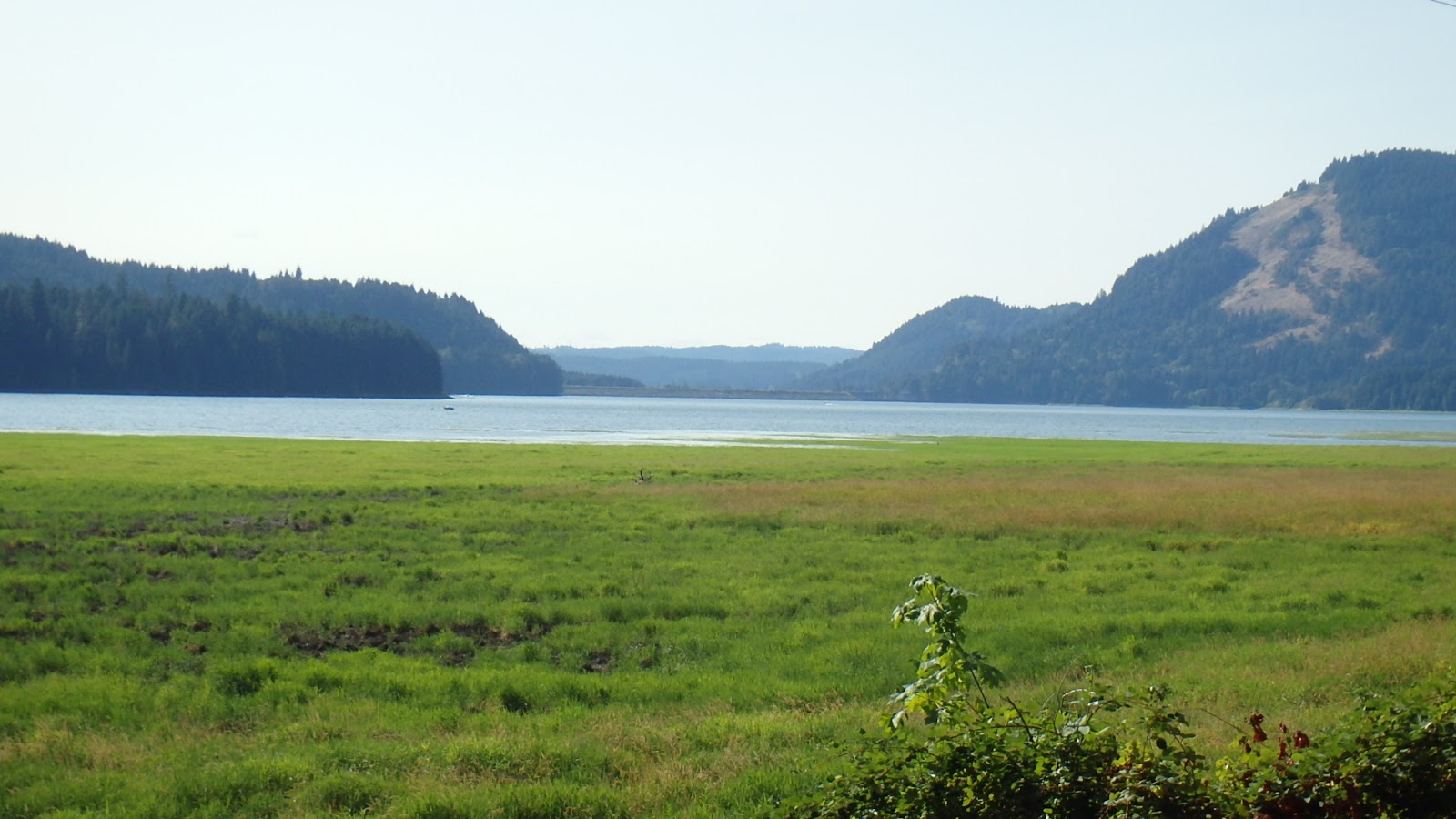 We didn't do too much stopping along the way back.  We were getting a smidge sore by mile 18 so we were focused on getting there.  Just keep pedaling.  And why is this uphill still?  We were really waiting for the downhill portion.  We did not expect the trail to be uphill both ways.  So much for a nice easy downhill ride to the car.  Did I mention the headwind?  By 4 in the afternoon the winds pick up from the west and clip along the valley at a pretty good pace.  We were now fighting a headwind on the homeward stretch.

By the time we reached the dam we found the downhill grade.  It wasn't as much as we were hoping for but it did provide some relief.  Unfortunately we still had to pedal because of the headwind.  No fair - we wanted to coast.

One more stop for pictures.  The orange bridge you see below crossed Mosby Creek about a dozen yards from the starting trailhead.  We stopped on the way back for pictures.  This is one of the Willamette Valley bridges that were used in the movie "Stand By Me" filmed in 1986. 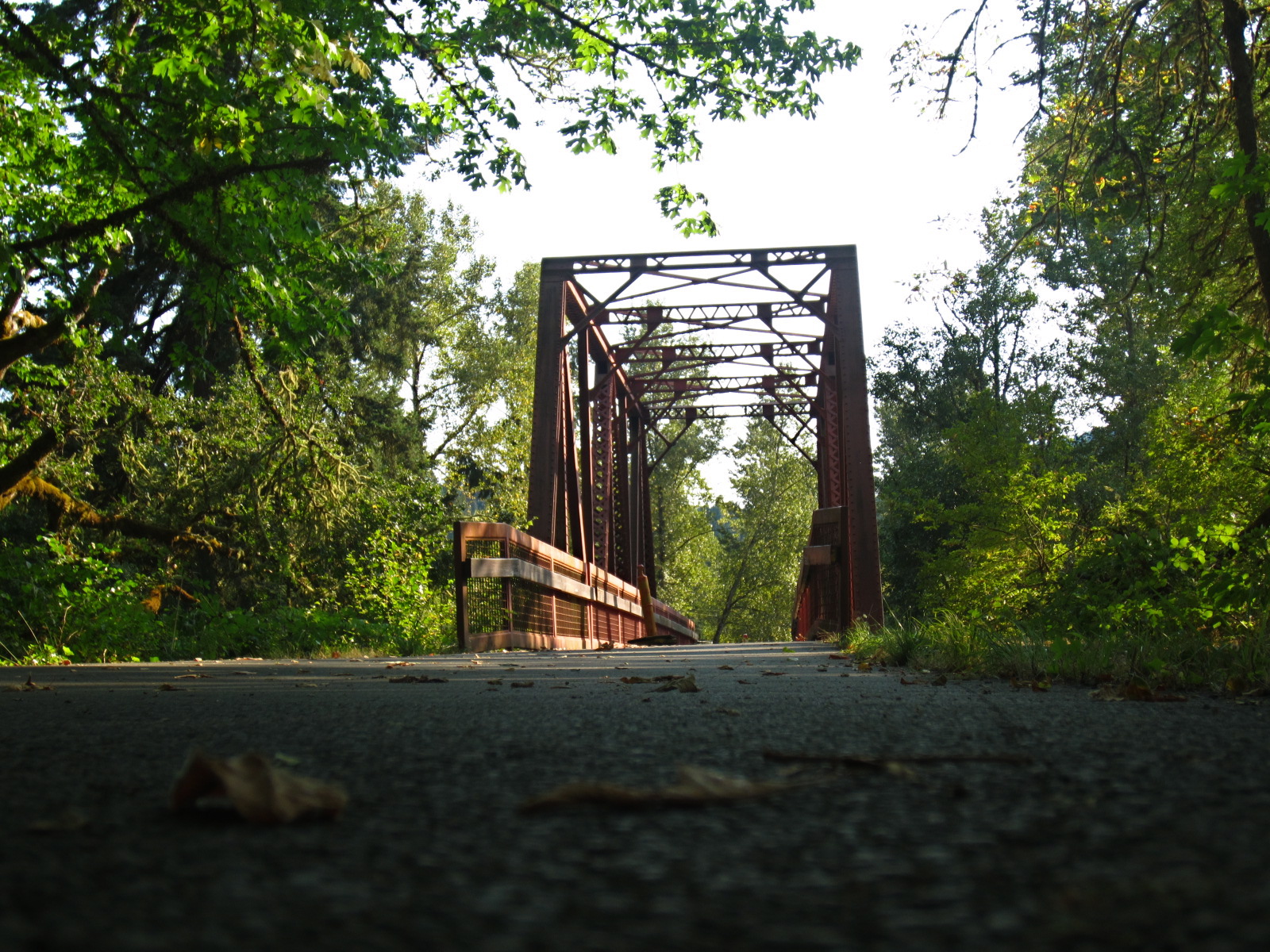 Here is a still shot from the movie when there were still train tracks running through it.


A few other movies have been filmed along the railway such as "Emperor of the North" with Ernest Borgnine in 1973, and "The General" with Buster Keaton in 1926.

We arrived back at the car at 5:30 pm.  Tired and sore, but proud that we had actually ridden the 26 miles.  We had some snacks for dinner then drove the hour and a half home.

Would be do it again?  I don't know.  While the views were pretty along the lake and for part of the farmland, it was more of an exercise in endurance than actual fun.  We talked about it and came to the conclusion that we enjoy puttering through the woods on single track mountain bike trails a little more.  Shorter, but more intense and more exhilarating.

"It is by riding a bicycle that you learn the contours of a country best, since you have to sweat up the hills, and coast down them." - Ernest Hemingway
.
Posted by Trobairitz at 6:09 AM