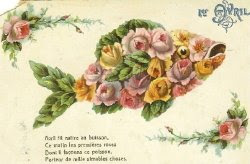 This picture is of a French "April Fish" postcard. Also known as April Fools.
When I saw April 1st approaching on the calendar it made me wonder how the day originally got the nickname 'April Fools Day', thus I decided to do a little research.
Did you know ........ that one theory is that in the year 1564 France changed it's calendar, moving the start of the new year from the end of March to January 1st. Those that clung to the old calendar and refused to change and instead celebrated the new year between March 25th and April 1st had pranks played on them. The pranksters would secretly stick paper fish to their backs. The victims of the pranks were then called "Poisson d' Avril" or "April Fish".  A term, which to this day, remains the French term for April Fools. Allegedly, this is how the tradition was born.
I know there are several versions of how the day came to be, but I think the above version is the most fun, Don't you?
-Au Revoir
"A common mistake that people make when trying to design something completely foolproof is to underestimate the ingenuity of complete fools." -Douglas Adams
Posted by Trobairitz at 3:53 PM