.
Well Troubadour and I had a busy fun filled motorcycle weekend. Temperature was in the 80's. We couldn't have asked for better weather.
The Oregon Vintage Motorcycle Ride was Saturday and started a few blocks from our house at the county fairgrounds. This year they were celebrating 50 years of the Triumph Bonneville. Cool for us since Troubadour has a Bonneville America.
We met the bike night crew for coffee about 10:00 am prior to the start of the ride and then headed to the fairgrounds about 11. We all hung out, looked at bikes and received our copy of the planned route.
Here are a couple of pics showing the bikes in the staging area..... 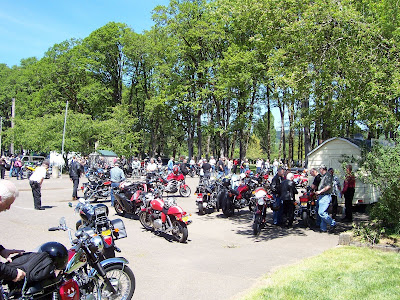 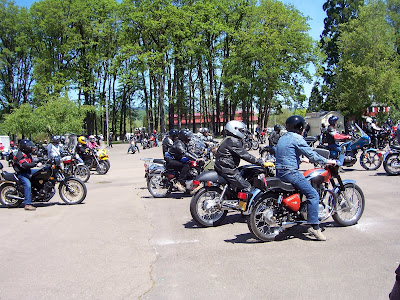 Stacy and Rick decided they didn't want to ride with the large group and took off a bit ahead and planned to stop at a good vantage point to take some pictures.
Stopped at a light trying to get out of town. Bikes in front..... 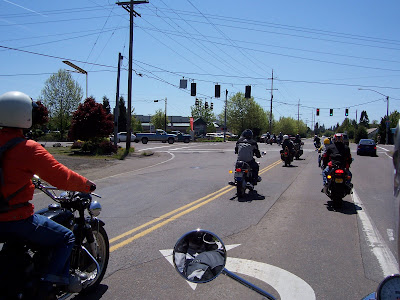 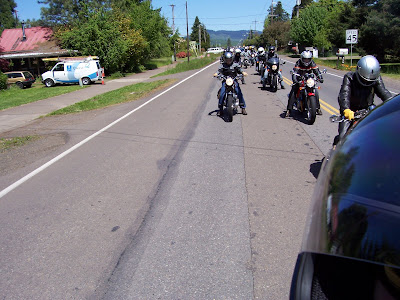 The route was slightly awkward and did some zig zagging over railroad tracks and such which made for a lot of slow downs and the group tightening up too much. It didn't seem to be a smooth route.
This ride was the first time I'd ever taken pics while riding pillion. Worked out well until the motion sickness started to kick in so I put the camera away. Here is a picture I took of Sean on his 2007 Triumph Thruxton as we passed him on a straightaway. 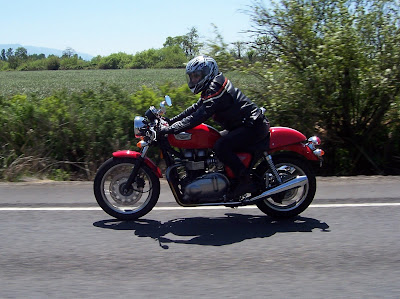 Our first stop was scheduled for the Chevron in Brownsville in case some of the older bikes with smaller tanks needed fuel. Here is a pic of some of the bikes lined up at that pit stop. 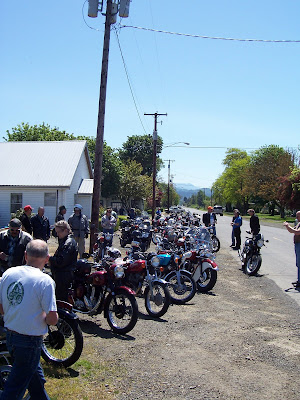 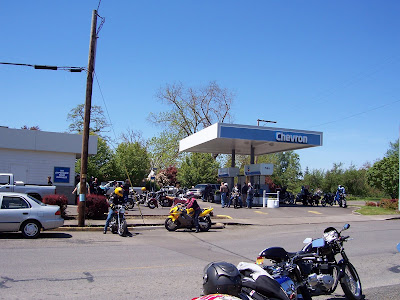 Me standing beside Troubadour's America..... 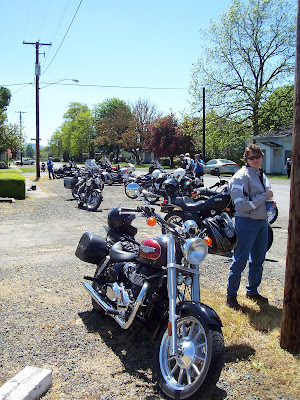 By this time we were ready to take off on our own. Troubadour called Rick to see where he and Stacy were and they were not too much further ahead. We, along with Sean on his Thruxton and Bob on his Blackbird decided to pull over when we passed them. We stopped and Sean stopped, but Bob kept on riding.
We decided we were hungry so Rick lead us to Lebanon for teriyaki and cucumber rolls for lunch. Troubadour then lead us back home to Corvallis the long way. We arrived in Corvallis just after 4. Good times.
Sunday was the actual Vintage Motorcycle Show and Swap Meet. Troubadour got the '76 Kawasaki KZ 900 LTD fired up and so headed to the show on it. Paid our $5 admission and ooh's and ahhh'd over all the bikes. There were a ton of bikes. Well over 100 I'd say. Unfortunately we forgot the camera at home. Stacy was there and hopefully she will post up some pics if she had her camera with her. Luckily Sean posted some on his website.
All in all it was a great weekend.
-Au Revoir

"Faster, faster, faster, until the thrill of speed overcomes the fear of death". ~ Hunter Thompson
Posted by Trobairitz at 5:00 PM