.
Doesn't seem like another week has almost gone by, but here we are at Thursday again.
Last Saturday Troubadour and I rode the America down to Eugene and visited with family. My maternal grandparents (Gran & Papa), Aunt Stephanie, Cousin Chelsea and her husband Danny and their son Carson are all in Eugene so when we go down we visit with everyone. My grandpa isn't doing so well and so they had to move him into a home at the beginning of August. He seems to be adapting well. We got to go over and visit him. Here are a few of the pictures we took while there. Please excuse my helmet hair and riding gear:
My grandparents.... 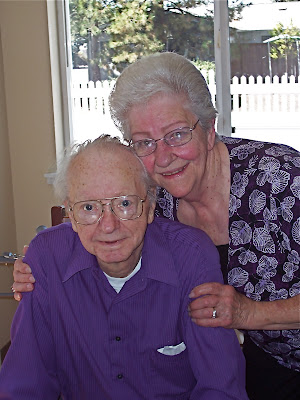 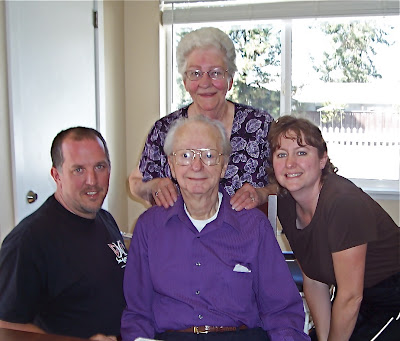 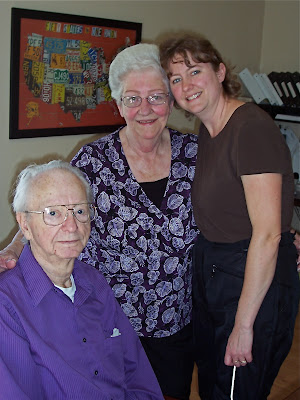 When we got back to the house Carson started to ham it up for the camera. He is such a cutie. He will be 4 in a few more weeks. 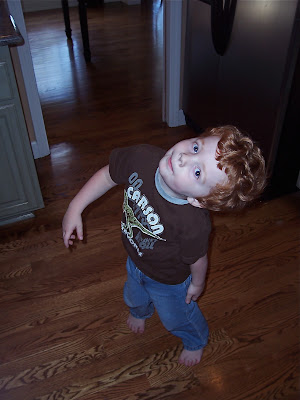 Good food was eaten and good times were had. Before you knew it we were heading north trying to beat dusk and avoid any deer heading out for an after dinner drink.
Sunday came and brought a little creativity. I've mentioned the photo tag before. Well, Troubadour got someone else's tag which meant he needed to post up a picture. We remembered a friend on the forum who said he loved his bike so much he would keep it in his living room if it would fit. Well..... as a shout out to that friend we managed to get the America in our living room and dared anyone to come "get the tag". 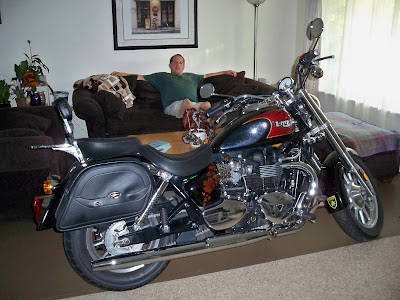 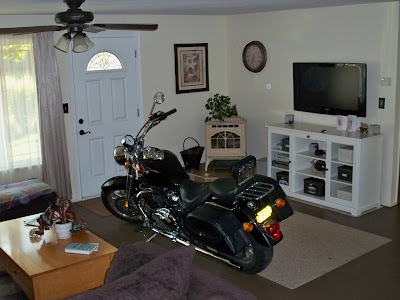 A few guys off the forum thought we were a little nuts, but no one seemed ready to take us up on our offer to park their bike in our living room. Sissys. Finally we had to call upon our buddy Rick. He jumped on board and came over Monday night. 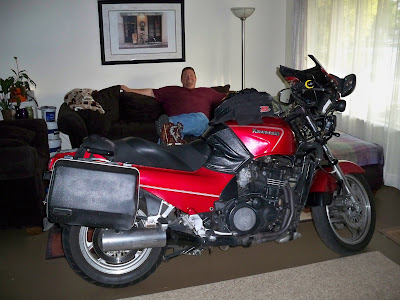 He has an older Kawasaki Concourse that has seen better days. He was side swiped by a deer several weeks ago and is missing his left luggage as well as most of his fairing. 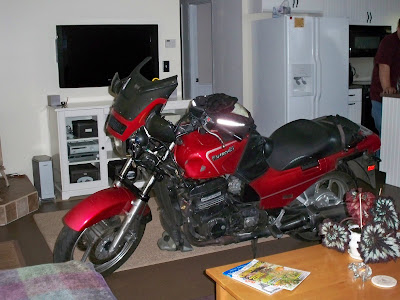 Troubadour took a dremel tool to the fairing to save his dash and 'Mickey Mouse'd" him some lights and turn signals. Another forum friend helped out with a donated headlight and yet another welded up the bracket for it. It is good to know people with skills. Especially when they are willing to go above and beyind to get a rider back on the road again.
Tuesday was pretty boring and last night we headed to Corvallis Bike Night. It was the 2 year anniversary of when Troubadour started the gathering and what a crowd we had. There were well over 30 of us packed into American Dream Pizza. Some first timers and a few that had been there from almost the beginning. All kinds of bikes ranging from several Harleys to at least 3 Ducati's, 2 R1's, an old BSA, and even an old Hondamatic 450. Good times. Wish we hadn't forgot the camera.
At bike night one of our friends suggested a different bike for me that we had not thought of.... A Royal Enfield Bullet. They have several models now all 499 cc and half have fuel injection. Intriguing.... Any thoughts from the peanut gallery on this? We don't know much about them but might have to check them out as there is a dealer about 25 miles away in Salem. I like the Electra seen below but I don't think it has EFI. 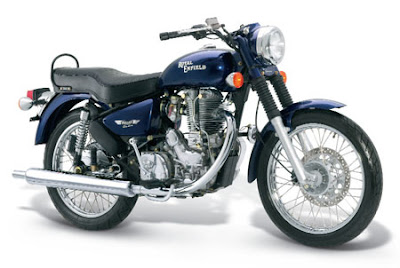 Now I am winding down to a nice 4 day weekend. I am lucky to have tomorrow off as my boss is still recovering from his surgery. It will be hard to go back to the office come Tuesday. No big plans this weekend as the Oregon State Beavers have their home opener. (Go Beavs!) Nothing like 30,000 crazy fans driving into town to keep you off the roads.

Have a great and relaxing labor day weekend everyone. Ride safe.

" Perhaps imagination is only intelligence having fun." ~ George Scialabba
Posted by Trobairitz at 4:45 PM