.
We took the Ninja off consignment and brought it home for the winter a week or so ago and as Troubadour was putting the title away in our lock box, he started looking through it to see exactly what we had in there. Apparently we have all kinds of things. Titles to the other motorcycles, our marriage license from 1996, passports, mementos, etc. Well.... one thing he happened across was a picture that I had thought lost in one of our moves. I don't think I've seen it in 10 years.
But first ......a little background........
Troubadour and I met in Penticton, British Columbia the summer of 1994 when we were in our early 20's and shortly thereafter had the opportunity to be spontaneous and go on vacation to the Oregon Coast. A good way to get to know each other. His mother graciously lent us the use of her motor home and off we went. One stop we made was in Florence to wander around Old Town, and there we saw a little shop that took 'old time' photos complete with costumes. To memorialize the trip we decided to have our picture taken. Little did we know that we would be living in Oregon one day.
Here is a copy of that photo. It is sepia tone and a little faded. Troubadour took a digital picture of it. 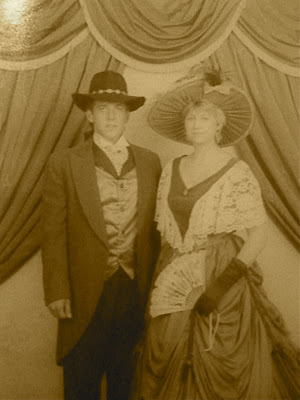 I then decided to do a little tweaking with iPhoto and came up with the following version. 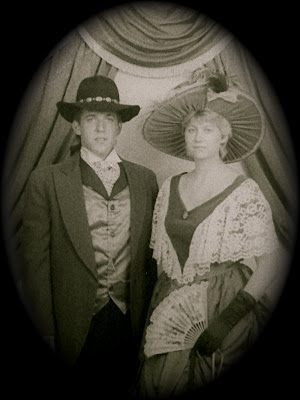 It was a nice surprise to find the picture and it felt good to laugh, reminisce, and walk down memory lane. I thought I'd share. I hope Troubadour isn't too embarrassed.
-Au Revoir
"Every man's memory is his private literature." ~ Aldous Huxley
.
Posted by Trobairitz at 6:35 PM