.
Well, it is official. Troubadour and I are attending the 2009 International Motorcycle Show held at Qwest Field in Seattle, December 11th - 13th.
Last Saturday, while at coffee with the bike night crowd, Rick brought up the suggestion of a group trip to Seattle via Amtrak for the show. We jumped on board immediately. We have been wanting to attend for a few years now, but for one reason or another we never made it. This year the stars are aligned and we are going.
The show is rumored to be amazing. All those manufacturers, booths and bikes to look at, sit on, and drool over.

One of the benefits of living within 10 miles of I-5 is that Amtrak runs up and down the corridor. Rick's original suggestion was to take Amtrak from Albany to Seattle and leave early in the morning on Saturday, attend the show, and return home on a late train Saturday night.

Troubadour and I figured if we were going to spend that amount of money on train tickets and were already going to be in Seattle, we might as well splurge on a hotel room and stay overnight. We have always wanted to go to Pioneer Square and Pike's Place Market so this would give us a change to do that on Sunday before taking a late afternoon train and returning home. It isn't that often we get to go on an adventure.
Rick posted up the idea on the forum to see how much interest we could generate from the other bike night attendees and it was also mentioned at bike night on Wednesday. We are trying to get the wives to go with their hubbys. If they don't want to look at motorcycles we are luring them with shopping while the rest of us play at the show. 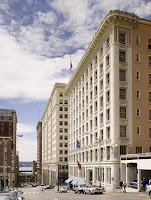 So far we have one other couple signed up to do the overnight. We found out the rooms at the Arctic Club Hotel are booking up quickly so went online last night and booked our room. We're locked in now. We opted for the cheaper non-refundable rate. This will assure our attendance. And....oh darn, there were only king rooms with jacuzzi tubs available. And the hotel has Starbucks coffee in-room. It will be tough but I think we can manage to stay there.
The hard part is going to be waiting until December 12th to go. Only 2 more months. We can do it. We will have bike night, Saturday morning coffee and sporadic group rides to tide us over as the weather allows.
-Au Revoir
"The whole object of travel is not to set foot on foreign land; it is at last to set foot on one's own country as a foreign land." ~ G.K. Chesterton
.
Posted by Trobairitz at 3:59 PM