Have a Devil of a Hallowe'en

.
When I was somewhat bored last Saturday I pulled out a box of old photographs just to see which ones were in there. I then proceeded to think I should take some digital pictures of them. With this day and age of technology the easiest way to share your photos is not the old fashioned way. Also, some of the photos were quite old and faded with no known negatives and I wanted to store them digitally before they were too far gone to be photographed. We do not have a scanner so that was not an option.
I found several old photos and grabbed the digital camera. Some of pictures were of Troubadour when he was little, a few were of me when I was little. I even found some of us when we were first together, but we'll leave those for another post.
When I saw this picture of Troubadour dressed up for Hallowe'en, I knew it would be perfect for a post this weekend. He doesn't remember how old he was but it's cute all the same. 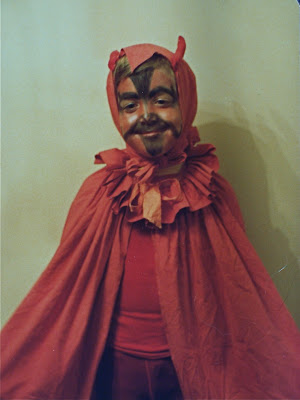 Whatever happend to mom's helping their kids make homemade costumes? It seems too easy nowdays to just go to the store and buy whatever you want.
One of my most memorable Hallowe'ens had homemade costumes. My brother Tiger dressed as an outhouse. He had taken an old refrigerator box, shaped the roof, and cut a door complete with crescent moom shape and it even had a toilet paper roll hanging inside. He had used paints and markers to make the outside look like wood. The same year I was a tube of Crest toothpaste. I had an ice cream pail as a 'cap' and I remember coloring the butcher paper by hand to look like the toothpaste tube. Wonder if there are pictures of that somewhere. Ahhh the good old days of imagination and homemade costumes.
May you all have a devil of an All Hallow's Eve.
- Au Revoir

"Proof of our society's decline is that Halloween has become a broad daylight event for many" ~ Robert Kirby
.
Posted by Trobairitz at 3:25 PM