The alarm rang at 6:01 yesterday morning. Bollocks! I hate it when we have to set the alarm on a Saturday. Although, it was for a good cause. As many of you may have already read on Troubadour's Blog, yesterday was the motorcycle show in Independence. Our friend Brandon was organizing it and we agreed to roll in early and help set up and get organized. A shower, couple cups of coffee, and a piece of toast later and Rick was here on his ZZR to escort us to Independence. We arrived in Independence about 8:30 am with little fuss. Only one wrong turn. Well, not so much a wrong turns as an "oops that is a gravel road and we have shiny washed bikes."
Setting up was complete and bikes started rolling in early. The sun was out and it warmed up considerably. Luckily we had shorts under our riding gear and were thinking ahead and brought sandals too. Sorry Bobskoot, I don't have Crocs ....... yet. 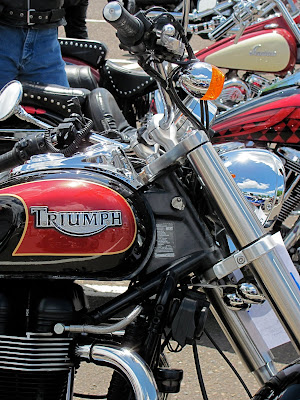 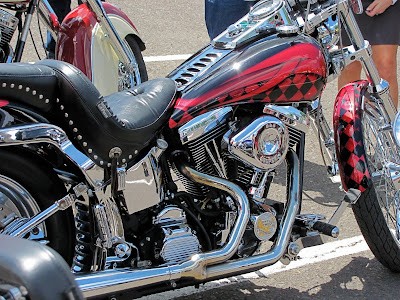 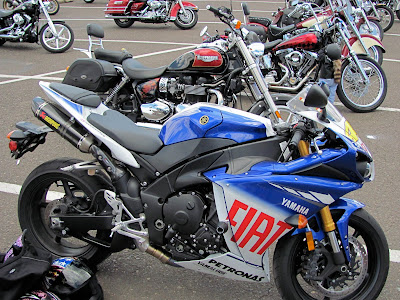 Early bird registrants were eligible for raffle prizes and those were drawn about 10:30. More bikes rolled in and people were voting for their favorites. The bike awards were given out about 12:30 so that everyone still had time for a ride after or to go home and visit with family and friends on the long weekend.
Rick, Troubadour, and I along with another rider decided to ride into Salem for sushi. Salem is our State capital and quite busy so I was a little apprehensive. Rick was in the lead and Troubadour called sweep. I missed one turn but luckily we had our radios with us and with a quick u-turn caught up. We rolled into Salem and had sushi for lunch. We were hungry enough we didn't stop for any pictures.
After a quick fuel stop we headed home the back way to avoid I-5. I had a few more firsts today. Not only did I ride in Salem for the first time but Rick took us back by way home via the Buena Vista Ferry. First time riding onto and off of a ferry. It was downhill to the ferry and uphill just after getting off the ferry. Luckily Troubadour gave me some pointers over the radio as we were on the downhill grade to the ferry...."Don't use your front brake." I used my back brake and all was well.
Here are a few pictures Troubadour took on the ferry. 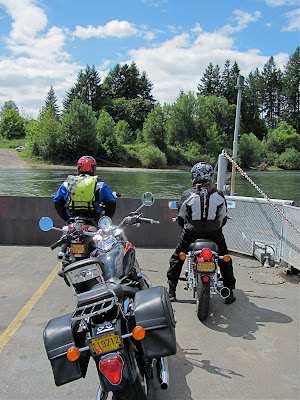 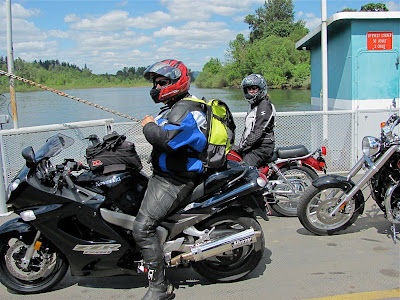 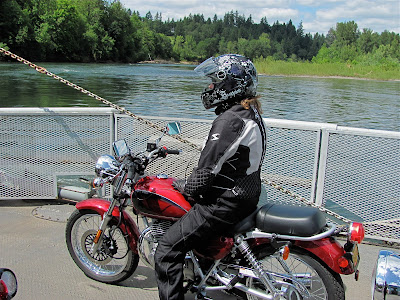 We didn't get any pictures of him because he had the camera. Going to have to get myself a little point and shoot I think. I always feel bad asking for the camera like I'm taking away a toy. Something small for the tank bag maybe.

We made it home and Rick decided he wanted to go to a plant sale and invited us along for the ride. He went home and picked up his Trooper and met up with us a bit later. While he was gone I discovered I really should have used sunscreen today. Yep sunburned. I am looking like a proper redneck right about now. Also managed a slight redness of my face, arms and back of my calves. I had sunscreen in the Triumph's saddlebags, but did I put it on? No....... of course not, didn't think I was getting burned.
Once we got home from plant shopping we relaxed and made some dinner. Ravioli with homemade pesto. Yummy. Spent the rest of the evening relaxing and puttering on the computers and downloading the photos off the camera.
Now to figure out what to do today and tomorrow. We shall see..... Take out the canoe? Another motorcycle ride? Shopping? Take a hike? Ride our bicycles? Not sure what we'll do but I know it will include finally sleeping in tomorrow, or at the very least waking up at the same time but with no alarm clock. Whatever we decide to do, you can be sure we'll have the camera with us.
Oh, and before I forget. Happy Independence Day America!
- Au Revoir
" Those who deny freedom to others deserve it not for themselves."~ Abraham Lincoln
.
Posted by Trobairitz at 9:10 AM