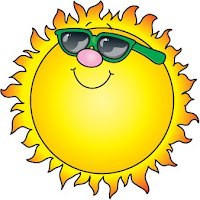 The weather has been quite toasty in the Willamette Valley the last week or two so we haven't been up to too much. We've been baking and boiling in the heat. I managed to get a toasty sunburn at the show on the 3rd so spent the 4th relaxing and hanging out trying to drown out the neighborhood fireworks with a loud movie as the cat cowered in the closet.
On Monday July 5th Rick needed to go to Portland for a motorcycle part and invited us to tag along. We took our Versa since it is better on gas than Rick's Trooper. Since we were heading up I-5 I made a request to stop at Bridgeport Village Shopping Center. Now, most people know I am not a fan of shopping .... any kind of shopping. Did I mention I don't like shopping. Although, there was one store I had been wanting to visit but had not been there yet. We didn't manage to get any pictures in the store but I did make a purchase..... 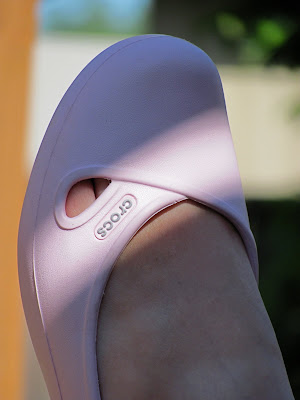 Yes, that is right. They have a Crocs store. All kind of Crocs. Dress Crocs, casual Crocs. Little Crocs and big Crocs. Crocs, Crocs, Crocs. I think I could make up a Dr. Seuss poem about Crocs. After trying on multiple pairs it became clear that my feet just were not meant for the most typical Crocs. They were either too small or too big. I was between sizes.
I've always felt that I was so non-conformist I don't even conform with the non-conformists. Well the Crocs I picked show it. Yes they are Crocs, but they don't conform to the type of Crocs that Bobskoot, Sonja, Bluekat and others have. I even picked a bubblegum color. How unlike me, but they should be a nice contrast to the TU. They'll even go with the rose colored mirrored visor I just put on my helmet. We'll get more pictures in Bend next weekend.
Crocs bought we were hungry for lunch. Hungry enough to eat a croc.... no wait, best find something else. Rick thought of a French bakery we might enjoy and he was right,
Petite Provence (Boulangerie and Patisserie) was several times the size of our French bakery here in town. 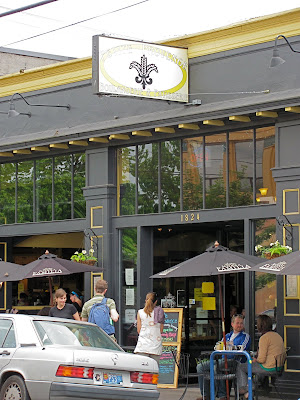 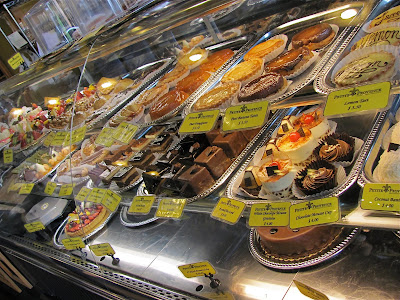 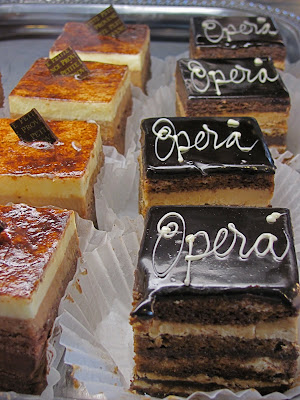 They had quite a few tables and a full menu so we sat down to order lunch. Rick forgot to warn us how large the portions were so I ordered the special - Riviera Sandwich (homemade bread, walnut pesto, brie, lettuce, tomatoes and roasted red peppers - served with homemade potato salad on the side) 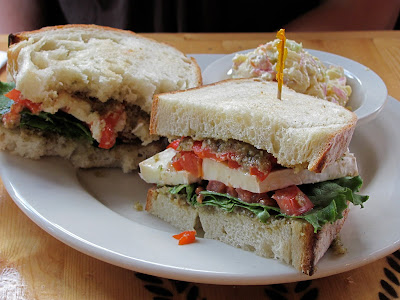 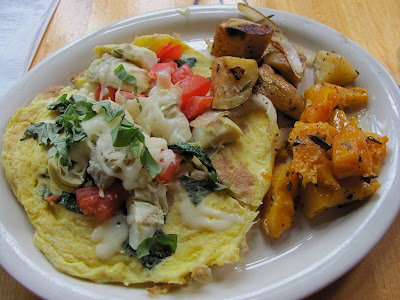 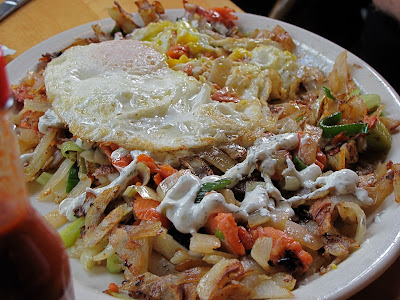 I had a coffee and the guys just had water. I hate to tell you this Bobskoot but it was way more than the three of us could eat and it was well under $50. If ever in Portland I highly recommend Petite Provence. In fact I think we'll go back just for dessert and coffee one day. Hmmm... what excuse do I have to go to Portland?

Yesterday Troubadour and I went for Saturday morning coffee and decided to ride to Eugene after. We were each on our own bike and had the radios hooked up for communication. Stopped at the Triumph shop for a few minutes and then on to Discount Motorcycle Parts. Troubadour managed to find some gloves at the Triumph shop but we didn't find any goodies at the other place. By that time it was 2 pm and we were starving. We headed over to Cafe Yumm for a quick bite in an air conditioned cafe. It was cooler yesterday with a high of only 88˚ but we both had full gear on and were boiling in traffic. We wear mesh pants and jackets in that kind of weather, which was marvelous when going over 20 mph, but was still roasty-toasty at low speeds and in parking lots.
We had a nice meal of an Asian salad for me and a salmon burger for Troubadour. Well rested and cooled off we headed for home. It was quite blustery along the back roads. The wind was whipping over the fresh cut grass fields. When we were almost home we decided to stop at a local store that sold Crocs. They don't have much in stock but we were assured they could order us anything we wanted. We didn't purchase anything but we did manage to get a few pictures under the sign. 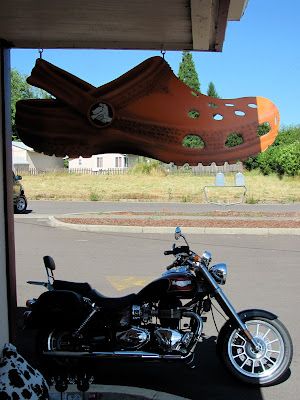 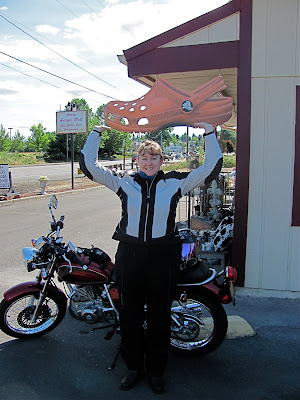 Somewhere on the ride home the TU rolled over 600 miles on the odometer. Time for it's first oil change. Troubadour was anticipating this so he stopped at a shop in Albany last week and bought an oil filter. The filter is damn small too. I should have taken a picture of it. This morning we went out and purchased some 10w40 oil and this afternoon Troubadour instructed me as I changed it. I put on some latex gloves to protect my hands from the warm oil. Here is me watching the dirty oil go into the pan.... 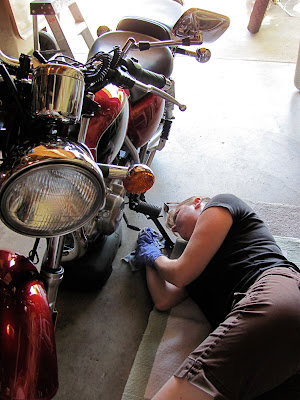 And pouring in the fresh oil (you can see the small filter on the oil pan) ..... 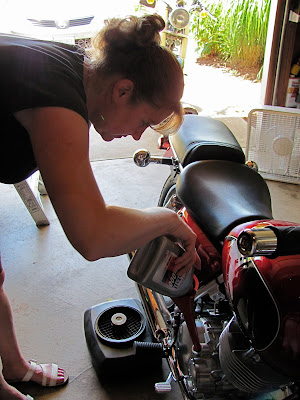 Troubadour decided it was time for me to clean my chain as well..... with a toothbrush. Luckily we keep all our old toothbrushes for just such occasions. That was a dirty job. Think I was smart enough to put the gloves back on? Nope. 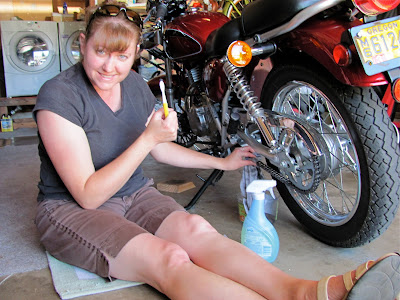 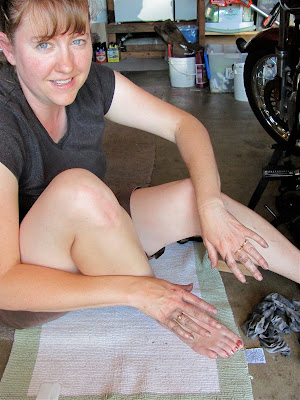 Troubadour was nice enough to help me with the chain, but somehow he didn't end up as dirty as I did. Must be all the practice he's had. He also put the chain lube on for me after. I think next time he cleans his chain, I'd best be in there helping him.
That sums up our week. Everything from boiling temperatures to an oil change for the TU. Good times.....
-Au Revoir
"Patience and perseverance have a magical effect before which difficulties disappear and obstacles vanish." ~ John Quincy Adams
.
Posted by Trobairitz at 9:29 PM