Will it make you sweat? 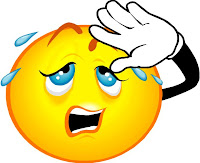 No sooner did the 4th of July come and go when summer hit full force in the Willamette Valley. This year there were no in between temperatures, no grace period. We went from a chilly 65˚ to sweltering in the mid to high 90's. Ick blah. Personally I am good with high 70's or low 80's.
We've begun to think of creative ways to beat the heat. We have a large stock tank we used as a pond at one point in time and were thinking of filling it up and using it as a pool of sorts. Not a good idea. The raccoons would invade it and wash their grub in the wee hours of the night. The raccoons are the reason we no longer have a pond. They like to drag your plants half way across the yard and eat your goldfish.
After experiencing 100˚ temperatures on Saturday we opted for a leisurely drive to the coast yesterday. We heard rumors the air was downright chilly just one hour to the West.
We managed to do a little bit of yard work in the morning. Some pruning and deadheading of climbing roses, watering and even spraying of weeds. Just before noon when it was already over 80˚ in the shade we decided it was time to head out. 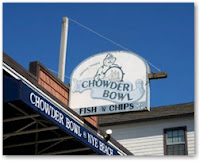 We got in the car and made our way to Newport - along with half the valley residents I am sure. Our first stop was the Chowder Bowl on Nye Beach. Mmmm chowder. Whether you be friend or family we will always recommend the Chowder Bowl. They have the best chowder we've found up and down the coast. FYI - Mo's is for tourists. I'm just sayin'.
There was only patio seating available and we gladly took it. Troubadour made one trip back to the car for our sweaters. The wind was a little nippy but I wasn't going to complain about the cool air. It beat the heat in the valley.
We relaxed and enjoyed our chowder and decided to head to the historic bayfront area to wander around and putter the day away. Our view driving down to the bay.... 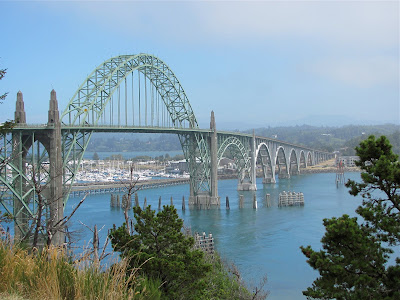 We found a parking spot without too awfully much trouble and started walking. Before we got too many steps Troubadour wanted to take a picture. 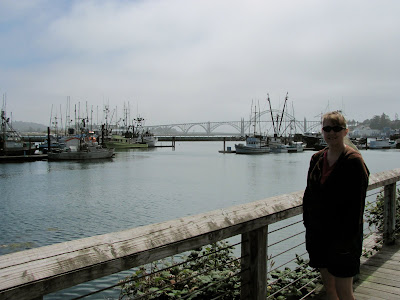 The sun was playing hide and seek with the wind and we were having a nice lazy day. We wandered in a few shops and even debated buying some salt water taffy. We resisted the urge and wandered some more.
There were a lot of fishing boats in the harbor.... 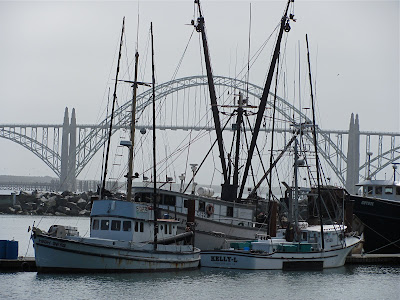 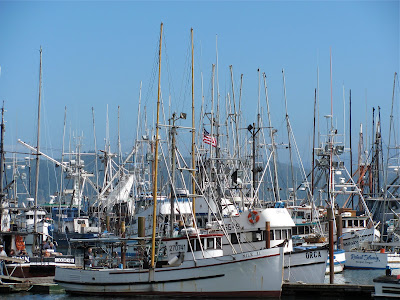 At one of the view areas the sea lions were basking in the intermittent sun. There were about a dozen laying on the docks being gawked at by dozens of tourists. We didn't get any photos of the sea lions but we did get a few shots of a fishing boat moored right up close. 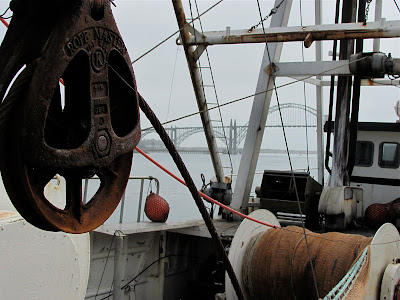 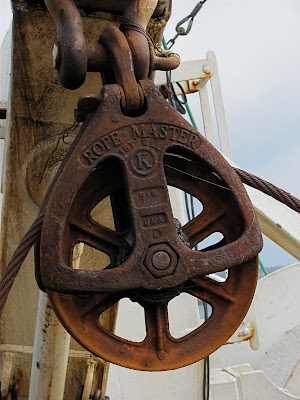 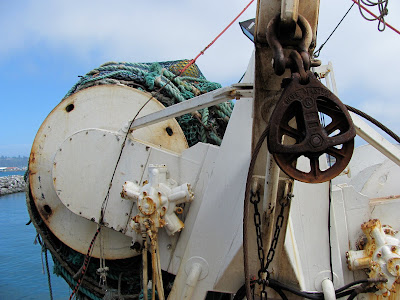 As people were looking at the sea lions we were looking at small fish swimming around the docks. We then spotted several starfish attached to the pilings of the pier. Hard to get a clear shot through the murky water but Troubadour managed to get the following photos. 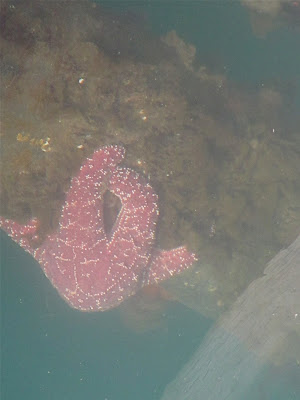 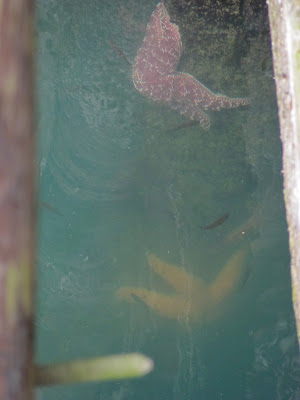 We made our way back to the car and decided to head South to Waldport. We arrived at Waldport shortly before 5 and everything was pretty much closed. Our stomachs were rumbling so we stopped at a grocery store and bought a couple bananas for a snack and headed East. We took the scenic route and arrived at the house somewhere between 7:30 and 8:00. We were out late enough so that it was cooler outside than in and were able to open up all the windows and let the breeze in.
It was a nice relaxing day. I highly recommend a trip to the coast for beating the valley heat.
-Au Revoir
"Deep summer is when laziness finds respectability." ~ Sam Keen
.
Posted by Trobairitz at 3:10 PM