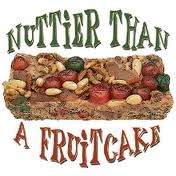 Tomato, tomahto;
Chateaux, chatoe;
....wait, what?
On our way home from Salem last Saturday we were driving down Independence Highway and saw a sign for "Rogue Hopyard and Chatoe." Our interest was piqued. We'd never noticed the sign before. By the time we passed a second sign it was time to turn around. Due to the unique spelling of the word chateaux we decided to follow the signs and see where they'd lead.
We drove past one more sign. This time Troubadour stopped the car to take a picture. 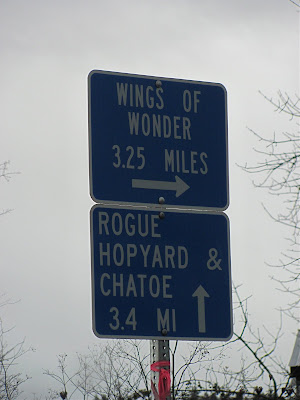 Now, we knew that Wings of Wonder was a butterfly house but the 'Chatoe' still intrigued us. It was beckoning us like a siren's song.
At some point we'd made a wrong turn. After Troubadour consulted the Garmin and RickRick consulted the web browser on his smart phone we did a U-turn and were on the right track. A 'Chatoe' sign at the junction would have been helpful, rather than the one that simply read 'dead end.'
We took turns guessing what it might be. Sign maker spelled it wrong? Marketing scheme to lure unsuspecting travellers? Part French for cat's foot? Hmmmmm....
We know there is a Rogue Brewery in Newport, as we have been there many times to eat chowder. It in itself is quite interesting. You walk through an old red silo to get to the door and walk through the brewery and gift shop before you climb some stairs to the restaurant where you are rewarded with a nice view overlooking the harbour. We haven't been there for a while but the food used to be pretty tasty.
I'm getting a little off topic. Back to Saturday...... As we drove down the dead end road we found ourselves driving by fields and fields of what once was hops. Hop fields to the left, hop fields to the right, hops hops hops. You can always tell a hop field by the poles supporting the trellis lines. 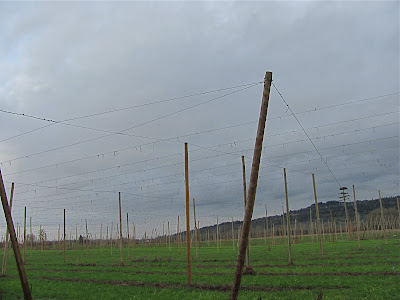 Eventually we were greeted by this sight. 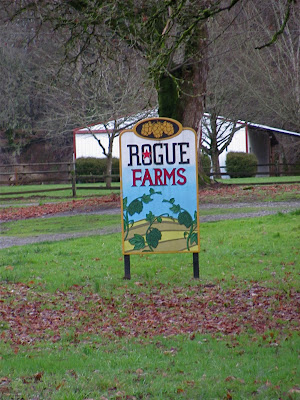 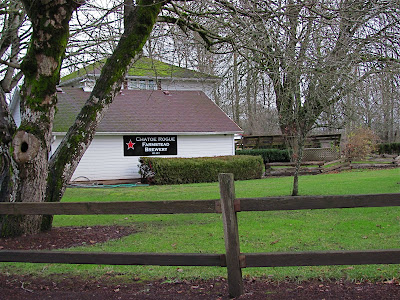 We thought the date on the sign was particularly interesting... 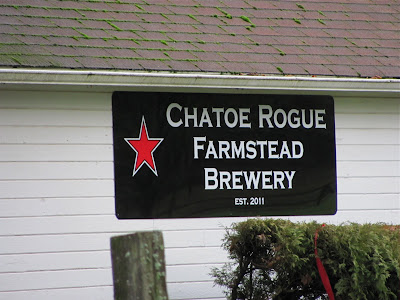 We circled the driveway and found this building - the tasting room and gift shop. 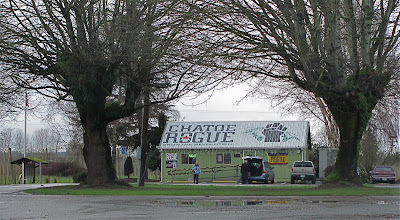 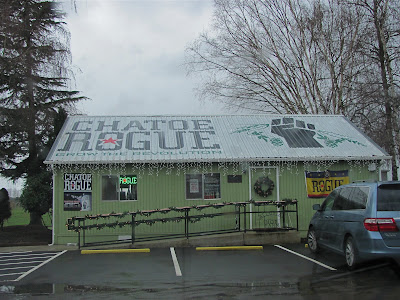 We knew by the red stars and signs they were in fact connected to the Rogue Brewery in Newport.
Turns out that this hopyard grows all the hops for the Rogue Brewery and Chatoe is the name of one of their signature lines of beer. This is on their label... 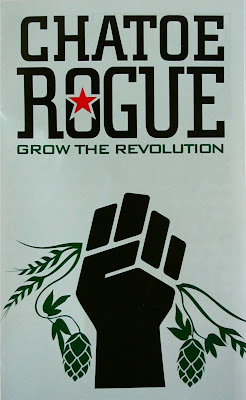 A 360˚ look around their circular driveway will show you the many buildings involved in hop harvesting and processing. 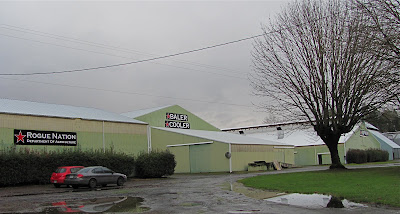 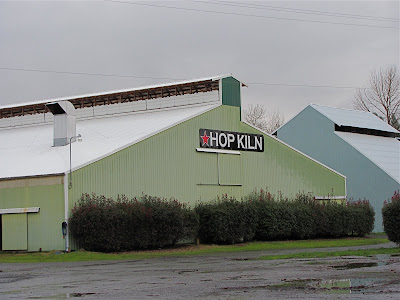 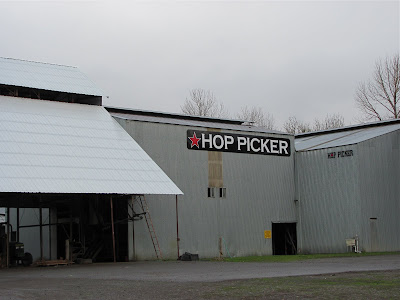 Part way around the drive you can see a small waterfall and bridge in the distance.... 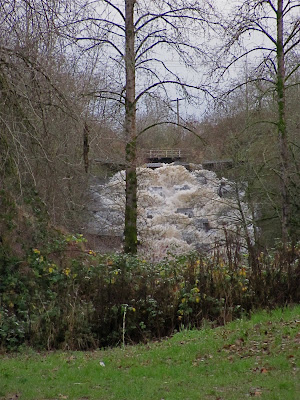 According to their literature the Rogue Hop Farm is on the historic former John Haas Alluvial Hop Farm. They grow seven hop varieties on 42 acres. All hops are harvested and baled on the farm. They have over 55,000 square feet of hop harvesting equipment, and a private beach on the Willamette River. They also are in the process of setting up a nano brew system at Chatoe Rogue named Farmstead Brewery. People will be able to sample guest batches of beer as well as take a tour of the hopyard, processing facility, private beach and Hop 'n Bed.
The Hop 'n Bed is a century farmhouse that was once used as a boarding house for the children of the Alluvian Hop Farm workers. Apparently it is a 5-bedroom house that sleeps 14 and can be rented for weddings, retreats, reunions, etc.
On the way out we took one more picture of this sign and hop field. 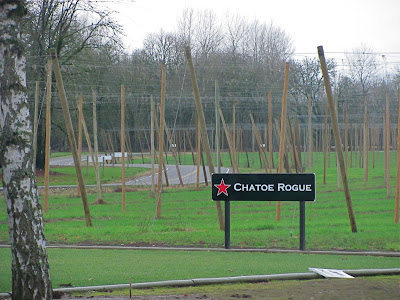 This picture also highlights some of the roads travelled to get to the Chatoe. We all decided it would be a great adventure to return in the spring or summer on the bikes to see the hops while in bloom and to take the tour. 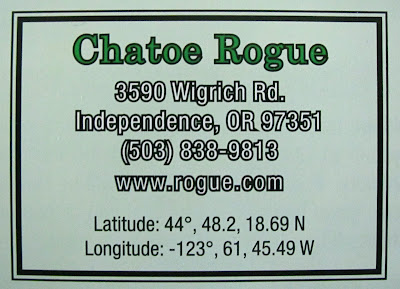 "Sometimes when I reflect back on all the beer I drink I feel ashamed - Then I look into the glass and think about the workers in the brewery and all of their hopes and dreams. If I didn't drink this beer, they might be out of work and their dreams would be shattered. Then I say to myself, 'It is better that I drink this beer and let their dreams come true than be selfish and worry about my liver." - Jack Handy
.
Posted by Trobairitz at 2:45 PM