.
Today is Monday already and we had an interesting weekend. Never did make it to the garlic festival on Saturday, but we did go for a nice ride to Depot Bay and Gracie's Sea Hag for lunch. Troubadour and I rode two up and one of our bike night crew joined us on his V-Strom. Saturday morning we met up with everyone at Creekside Coffee in Corvallis. There were three rides going on. A group was headed to Bend to test ride Ducati's. We were headed to the coast for a chowder run and the other was heading to Eugene.
We all headed out about 10:30 am or so and went our different routes. Here is a picture I've pilfered off our PNW forum showing everyone at the coffee stop before heading out. Thank you Ducatichick for taking it.

The ride to the coast was uneventful. A few back roads were taken at a nice pace. Troubadour went easy on me as I wasn't in for a "spirited" ride. Some of the backroads were a little choppy though - quite the butt buster. They really need to be resurfaced. Pulled into Depot Bay and the Sea Hag without too much trouble. Hwy 101 traffic is always heavy though.
The Sea Hag had an extensive menu and was actually quite pricey. We'd heard good things about it though so had to try it. The only thing on their menu that was vegetarian was a garden burger - no kidding - even the salad's weren't vegetarian. We didn't feel like yet another garden burger. The clam chowder had bacon in it so I opted out of that. Troubadour decided on the fish and chips with salmon as the fish. I had the fish sandwich, as i was having fond memories of the fish sandwiches at the Barley Mill Pub in Penticton. Anything on the menu is highly recommended at the Barley Mill if ever in the Okanagan. Here are the obligatory photos. They didn't come out well as we used our new Kodak camera we aren't too happy with..... 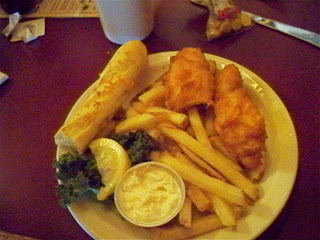 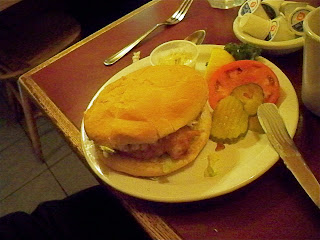 We were all full from lunch and headed back to Corvallis the same route we came, arriving home at 4 in the afternoon. Had a nice relaxing evening.
Sunday we decided to have a lazy day. Slept in and I made homemade blueberry muffins for breakfast. Puttered in the yard and headed to a couple of plant nurseries. Headed home and about 6 or so in the evening decided to take the bikes out since I'd only been on the Ninja twice.
Well the motorcycle gods/gremlins got to me. I had an epiphany and decided that the bike just isn't right for me. There is something about it. Maybe it is too big? Too intimidating? Too performance oriented/powerful? There is just something that is freaking me out. I got a few blocks down the road and just couldn't do it. Maybe it is because I've never really been a fan of sportbikes. I like the standard or naked bikes. I do not have a need for speed. I am built for comfort not for speed.
Troubadour is very supportive and said he was proud of me for admitting what a lot of people wouldn't and that is that I either stepped up too soon and/or that a bike wasn't right no matter how easy other people thought it was to ride. He'd rather have me find out there was something about it now rather than wrecking going around a corner later. I never scared myself with the throttle or anything like that. Never lifted the front tire, I think I was too apprehensive of the power to give it much throttle. I did have it up to 65 mph on the backroads on a few straight stretches. 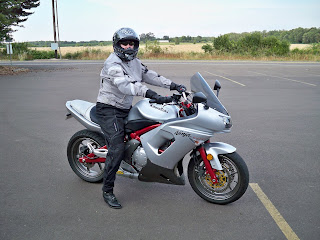 When I was riding the Nighthawk 250, I thought that it was a little too shaky, light and a pain to ride, but I can tell you I had a lot more fun working it to get it to 60-65 than attempting to hold on to the Ninja. 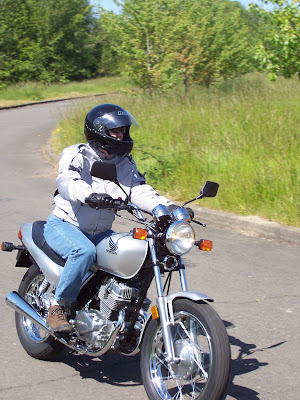 So.... the Ninja is up for sale and we're on the hunt for a smaller lighter bike. We are actually looking at the Suzuki TU 250 again. Maybe that is what I should have bought before the Nighthawk. We'll see. Troubadour would rather see my on a smaller bike having fun and keeping up with him that a larger bike and not wanting to ride. Here is a pic of the TU - they call it a baby Bonneville. Seems fitting. 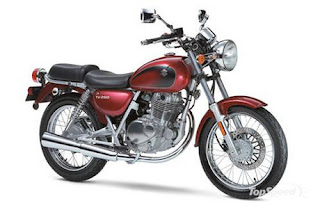 I will keep everyone posted so stay tuned.
Now that the weekend is over we're back to work. Today is our 13th wedding anniversary and my mom was nice and sent a beautiful bouquet of flowers to my work and my brother even sent a text message. That was very nice of them. Troubadour and I are heading out when he gets off work for a nice dinner at a local place called The Woodsman. They have excellent Thai food. Perfect for our anniversary.
- Au Revoir