.
Well another week gone and done. Not that it is the weekend yet, but it has been about a week or so since I've posted much beyond the camping utensil picture.
Troubadour and I were gone last weekend for a long weekend. Headed to his Mom and Step-Dad's in North Eastern Washington on Saturday and came home Monday. Had a great visit. His Brother and Sister-in-Law were there as well from Kelowna so it was a full house.
We had a good visit. Good people, good food, and good times.
We were up at 5 am on Saturday and out of the house by 7 am. Headed North on I-5 and then took the I-84 down the Columbia Gorge. Beautiful scenery as always. We weren't looking forward to the 10 hour drive each way but it wasn't too bad. You just have to find as many Starbucks as possible. 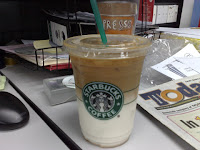 We did find out that if one is desperate enough (yes even for decaf) that you can spot a Starbucks sign in Spokane across 5 lanes of traffic and through a horse trailer. Believe me, I did it. Good job Troubadour was driving. He hit the gas, snuck in front of the truck pulling said horse trailer and into the left turn lane we went. It was about 108˚ in Spokane Saturday afternoon so those "iced Decaf Caramel Macchiato's" were mighty tasty. Something to lift the spirits for the last 2 hour leg of the trip.
When on a motorcycle we like to say it is the journey that is important not the destination. In this case we were in the Nissan Versa and it was the destination that was important since the journey was nothing to get excited about. The scenery through Eastern Oregon and Washington did not enthrall us. Something about sagebrush and scrub pine trees in extreme dry heat that just doesn't do it for us. We were happy to smell the humidity when we got back to the Willamete Valley on Monday.
We decided to take a different route home on Monday. The in-laws gave us good directions and got the maps out. A nicer twisty road that followed a river for the first leg of our journey. We meandered down to I-90 and drove through Yakima. South of Yakima but before Goldendale we stopped at the St. John's Monestary and Bakery for lunch. A quaint bakery that sold Greek entrees and baked good. Stuffed ourselves with some Spanikopita and Baklava and off we went.
We finally arrived home at 7 pm that night. Round trip was 20 hours of driving. Not bad for a three day weekend.
We are still trying to catch up on sleep and at work but we'll get there. Tonight was Corvallis Bike Night so I walked down after work and hung out with everyone for a while. Had a great slice of pizza and headed home. Troubadour was still down there visting when I left. I was too burned out from work and just wanted to head home.
Haven't had much time to get out on the Ninja lately with being gone and tired from work. Maybe this weekend. The weather has finally cooled off to a balmy 75-80 here in Corvallis. Perfect for riding. If only the wind would calm down. 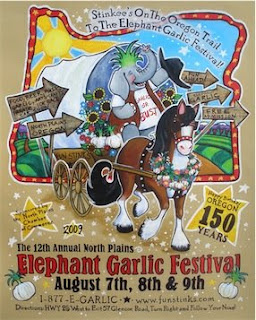 We have the Elephant Garlic Festival coming up this weekend so I believe we might suit up and head out on the Triumph on Saturday. To me garlic is like the other white meat. Oh wait, we are vegetarians, it's the only white meat. We love garlic and I use lots when cooking. You know.... if the recipe calls for 1 or 2 cloves I have to put it at least 4 maybe more. Good thing Troubadour loves garlic too. We haven't been to the festival before but heard about it from the local Women in the Wind chapter that rides there every year.
That will still leave Sunday for taking both bikes out and putting some more miles under my belt. Will try and take some pics. Until then.....

" Too often travel, instead of broadening the mind, merely lengthens the conversation." ~ Elizabeth Drew
Posted by Trobairitz at 7:55 PM