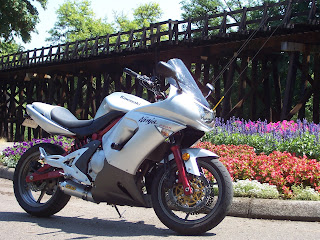 Just thought I'd post a quick update on the bike situation.
Yesterday after morning coffee with the bike night crowd, Troubadour rode the Ninja to Eugene to consign at our favorite Triumph dealership, Cycle Parts. He called Rod, the owner, earlier last week and Rod was on board for selling it. I followed Troubadour down in the Versa.
I must say how nice it is to deal with this shop. Rod was busy when we arrived and his daughter graciously helped us with the consignment form, looked up Kelly Blue Book value and agreed with us on it's worth without our having to mention what we thought it might be worth. She stated that her dad wanted us to look at a "for sale by owner" listed on his bulletin board. Seems someone had a 2006 Bonneville they were selling for only $3,300 because it had a dent in the tank. We went inside to take a peek. The ad looked great but we were informed that a guy who was just there had already bought the bike. Of course he did, it was a great deal. 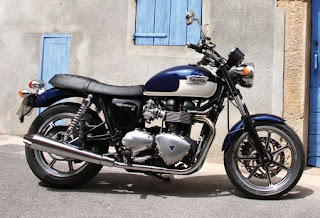 That having been said, I took the ad down for him and we perused bikes. One thing I noticed was how small the Bonneville SE really did look. I sat on it, Troubadour sat on it. I moved it back and forth, tilted it from side to side, put my feet up, down, etc. Sure didn't feel as heavy I remembered. Sure didn't seem much bigger that the Nighthawk. That was encouraging. I didn't have my gear with me so I did not take it for a second test ride. Our first test ride on it was a month or two ago. Troubadour mentioned when we left the house about taking my gear and I said that I wanted to sell the Ninja first and if I rode the Bonneville SE and fell even more in love with it, it would just be teasing me.
I think the metaphor I used was it is like giving someone a cookie but telling them they can't eat it. "Here is a cookie. You can't eat it but you can lick it a few times." No fair. He laughed and understood why I didn't want to take it out until I was ready to pull the trigger. Rod was really busy so we headed to Discount Motorcycle Parts (DMP).

We had not had breakfast yet and it was already noon so we stopped at the Daily Bagel for lunch, which is just beside DMP. The bagel shop is great and we always try and stop there when going to DMP. They have amazing hand made bagels, a lunch menu and also a full espresso menu. I had a swiss cheese bagel toasted with garlic/artichoke/parmesan cream cheese. Not healthy, but entirely too yummy. Troubadour also had the swiss cheese bagel, but made his into a veggie sandwich and we chased them down with iced decaf vanilla lattes. Sorry no gratuitous photos of the grub.
With our bellies full we headed next door to DMP. I was checking to see if my new mesh Scorpion Nip/Tuck jacket had arrived yet. It has been on backorder for about a month and a half now. Still no luck. I hear maybe September. By the time I get it I'll need a thermal liner in it. Speaking of liners, Troubadour did score a new Tourmaster heated jacket liner. He is excited to put it to use. When he commutes in the winter at 28˚F he gets a little chilly. The liner has full sleeves and a heated collar. He will be toasty. Annette at the shop looked at him a little weird when he said he'd take it. I guess they aren't selling many in August. She had to take us into the back room to show it to us. I am sure he will blog about it when he gets to try it out.
When we left Cycle Parts we told Rod we'd stop back by and see him as we had not had a chance to talk to him when dropping off the Ninja. Back to Cycle Parts we went. He was just going for a soda with his wife (Hey, isn't that an old Kim Mitchell song? - not that anyone knows who he is down here). When he came back we chatted a bit. Troubadour sat on the Thunderbird and if he still had his gear on Rod said he could take it for test ride. He is looking forward to trying it out. He's not a fan of the exhaust or rear fender on it but really liked the comfy seat. Might be the only thing that ever pried him away from his America, but I doubt it.
We talked to Rod a few minutes about the Bonneville SE and asked him how many mile he needed before selling his demo. He volunteered to sell his demo to me then but I told him I had to wait for the Ninja to sell. I said, "Sell that Ninja for me Rod and I might take that SE off your hands." 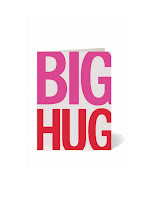 You know you have found a great shop with great service when the owner makes an effort to personally talk to you every time you are in and also gives you a hug goodbye when you leave. Yes, it is true. We did not even purchase anything yesterday, and he still gave me a big hug when we left.
Never have I had that kind of service anywhere else. What can we say, we are fans of Triumph for life. We'll also support Rod and his shop any way we can..... Stay tuned for updates on the Ninja sale.
-Au Revoir