Goldilocks and the Three Bikes

.
There was a woman back in the fall of 2002 who took the Team Oregon class and received her motorcycle endorsement. For purposes of this tale, we shall call her Goldilocks.
The stars were not aligned for her to purchase her own ride for some years. Finally in early 2009 the time was right and the search was on. She and her hubby (we shall call him Troubadour) finally settled on a 2006 Honda Nighthawk 250. Everyone was excited and she was happy to be learning. 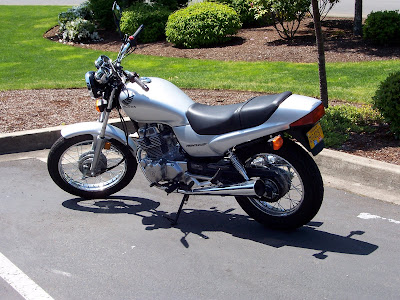 After a month or so of going out after work and on weekends tooling down the backroads Trobairitz, er, I mean Goldilocks felt the bike just wasn't right. It didn't feel stable at highway speeds and almost felt too small. It was decided to sell the bike and purchase something a little different.
The Nighthawk sold in June and the search was on. Many different ideas were gathered from different sources. Everyone seemed to have an opinion about a next bike. It was decided that a beautiful 2006 Ninja 650r they noticed on Criagslist in Washington was the bike of choice. It was silver with a red persimmon frame. Very striking. They drove up after work one night and thought it was the 'bees knees'. Troubadour took it for a quick test ride and thought it would be a great bike that Trobairitz, er, I mean Goldilocks wouldn't grow out of very quick. Money was exchanged and he had a long ride home. 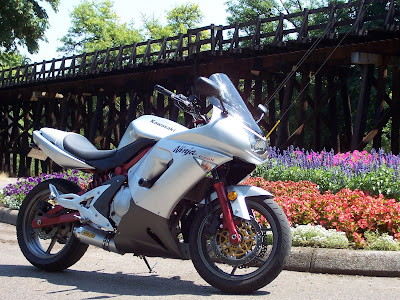 Trobairitz, er, I mean Goldilocks was excited to ride it the first time and went tooling around the backroads. She was happy that it seemed more stable than the Nighthawk and less wind hitting her torso too. She took it out one other time on the same backroads, but the third time out something was just off. She couldn't make it out of her neighborhood. The bike had bad mojo for her and she couldn't ride it. They decided it was probably too much bike for her too soon and a little too sporty as well. Better to ride a smaller bike to it's full potential than a fast bike reined in so much.
They decided to sell the Ninja. They tried on Craigslist then decided to put it on consignment in Eugene. No bites so Troubadour brought it home in September and used it for a winter commuter. In January they thought they'd list in on Craigslist again. Seemed like every time they'd post it someone would flag it. They couldn't figure it out. After having the ad flagged three times in one day they decided to wait for a bit since Troubadour was still using it to commute.
One day last month after looking at some shops in Portland and stopping by the Suzuki dealer in Salem to see what they'd give them for a trade they decided to try Craigslist one more time. That night Troubadour listed it and it sold the next day. The new owner is very happy with it - that is good.
Once that sold they reevaluated their finances due to a large federal tax bill. Yes, you get the shaft when you both work and don't have kids. They figured they could still swing a bike though if the opportunity presented itself.
They looked and searched and drooled over bikes and finally came to the conclusion that Trobairitz, er, I mean Goldilocks would be comfortable on a Suzuki TU 250. The hard part was finding one. You know by her previous post that they did manage to find one last weekend.
She took it out for her first ride yesterday. She had some huge butterflies in her stomach since it had been several months since she'd been the rider and not passenger. A pre-ride Rolaid made the butterflies calm down some and off they went. They went the long way to meet everyone for coffee. The motorcycle coffee crowd must have seen them roll in as they stood up and clapped when she walked up to the table. She prefers to be in the background and not draw attention so this was slightly embarassing.
After coffee they took it out and Troubadour decided they should get the photo tags. Sure why not. She was getting more used to the bike and was having fun. They went through campus, then north of town and then on the highway a short ways to Peavy Arboretum and the forest research area where they snapped this pic. 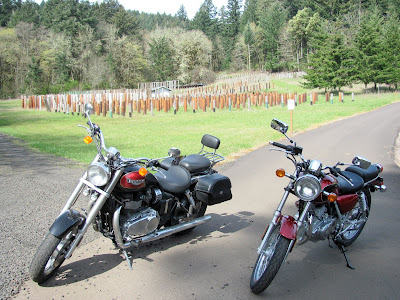 The similarities between the America and the TU are uncanny. It does look like a mini version. They headed back into town for some lunch. Found a couple of new photo tags and headed home. By the time they got home Trobairitz, er, I mean Goldilocks had a huge smile on her face and was happy happy. She knew then that she had finally found the right ride. Sure it is small, but it is light and nimble and she enjoys it. It doesn't seem to shake her around as much as the nighthawk did and the wind doesn't seem to push her back as far either. It is a pleasure to ride and she is looking forward to taking it out again soon. Maybe when this rain stops. Until then.... she shall keep reading Proficient Motorcycling and learns some more tips she can put into play.
-Au Revoir
"A motorcycle functions entirely in accordance with the laws of reason, and a study of the art of motorcycle maintenance is really a miniature study of the art of rationality itself." ~ Robert M. Pirsig, Zen and the Art of Motorcycle Maintenance
.
Posted by Trobairitz at 9:35 AM