.
Saturday dawned slightly foggy with the promise of brilliant sunshine here in the Willamette Valley. We had plans to meet for our Saturday coffee with the group and then ride to the Evergreen Aviation & Space Museum in McMinnville. 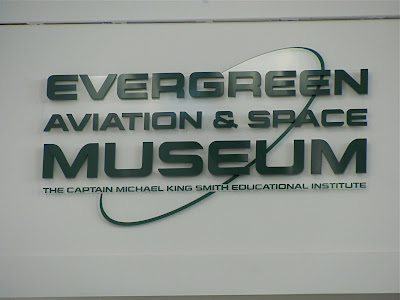 Troubadour and I have been fighting colds for a week and he was a few days ahead of me in getting well. My head was stuffy and it was settling in my chest. I opted to be responsible and ride pillion that day. I didn't think it would be very prudent of me to ride the TU without being 100%. I missed riding my own bike but I knew Troubadour would get us there and back safe and I could zone out on the back of the bike. There is a lot less room on the back of the Tiger than there was the America so once I am on I'm pretty secure between his back and the trunk. Good view of the sticker on the back of his helmet too.
The ride up Highway 99 was uneventful but the sun was shining by the time we left Corvallis. We were slightly chilly on arrival but being out and enjoying a sunny day in January more than made up for it. Our friend Gil took the following photo on arrival. 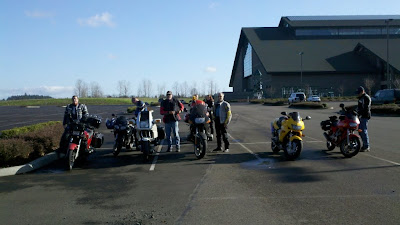 There were 8 of us on 7 bikes. And once again I was the only girl. I should be used to it by now. I'm almost a mascot at this point.
Check out the Mr. Happy puppet Troubadour purchased for me when he made his last Aerostich order. I am sure it will appear in future ride reports. 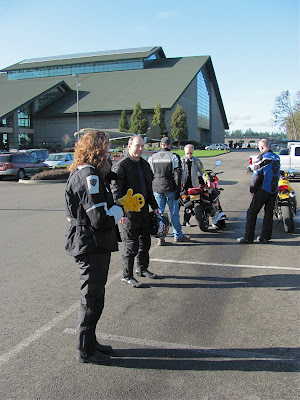 By the time we arrived it was noon and we were all looking for grub. Unfortunately the cafe at the Museum did not have any choices for vegetarian fare unless you wanted a really overpriced container of lettuce or a slice of prefab cheese pizza. Good thing we had some protein shakes in the tail bag. While everyone was eating inside we went out and relaxed in the sun and had lunch.
When we went back inside Troubadour took this photo of everyone in the cafe. 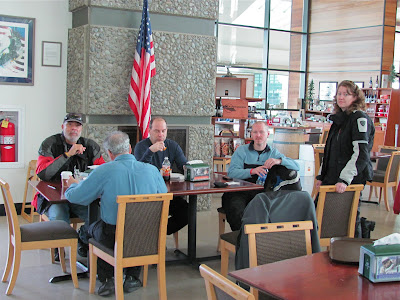 RickRick was missing from the photo (he'd just gotten up from the table) as was Todd who chose to wander around outside and then ride home again right away due to obligations.
A day pass will get you in to both the Aviation building and the Space building. You can go to the iMax theater but it is an additional fee. The claim to fame of the Aviation museum is that they house the original Spruce Goose built by Howard Hughes. It was painstakingly restored at the museum. You can see it here through the front window. 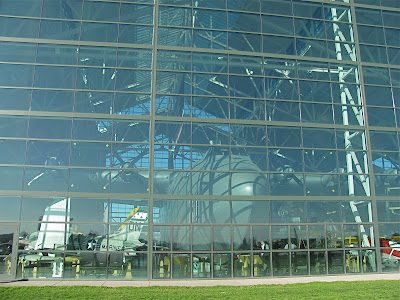 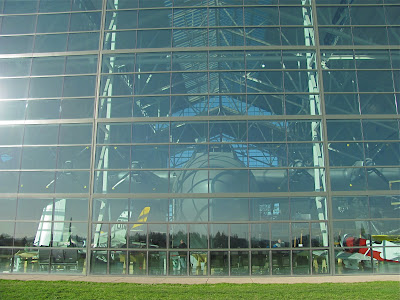 They even let you on the big bird. We walked on and looked towards the front..... 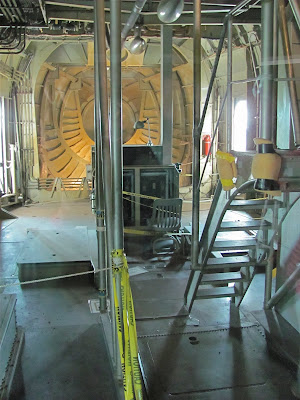 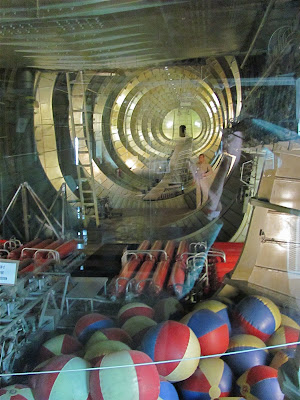 We opted not to pay the extra fee for the tour to the cockpit. Unfortunately the lens on our digital camera wasn't wide enough to get the entire plane in one photo. 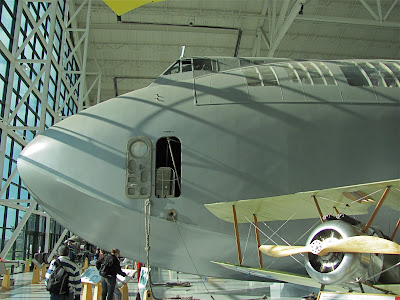 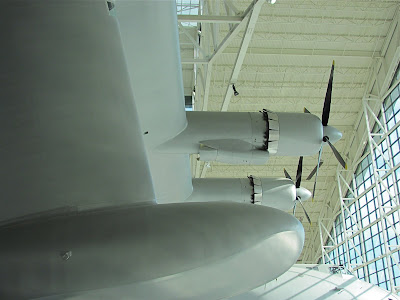 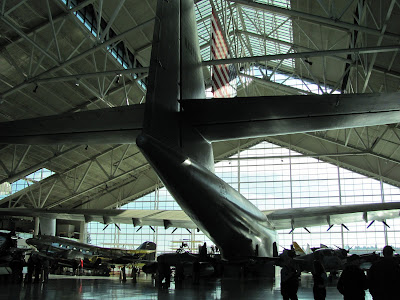 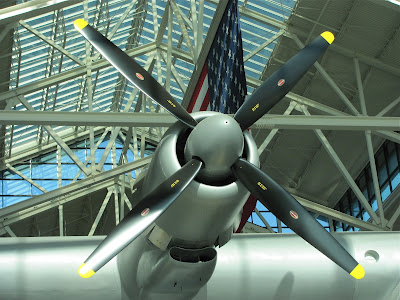 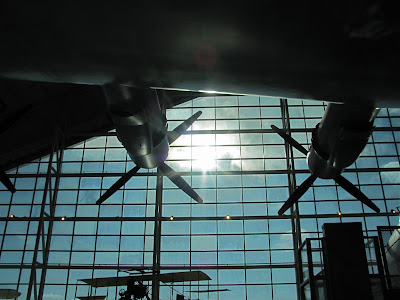 Gil managed to go up to a mezzanine and take a pretty good picture of it. 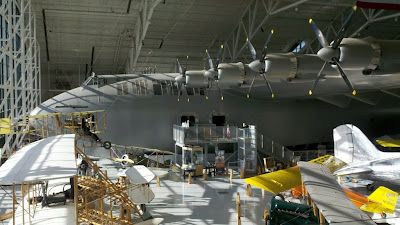 After looking at the goose we proceeded to wander around and look at all the other planes. Brilliant sunshine through the glass windows didn't always make for the greatest lighting for photographs. 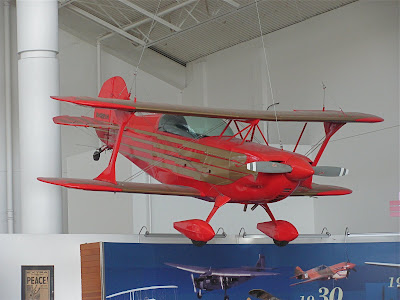 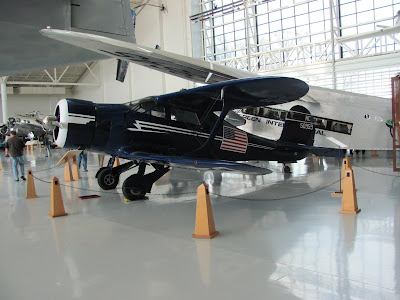 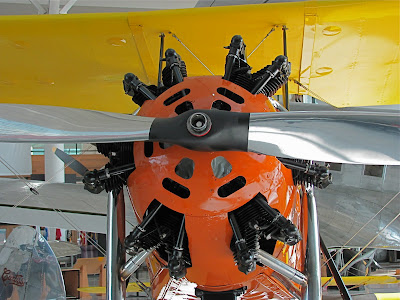 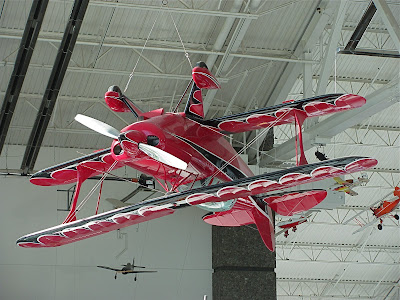 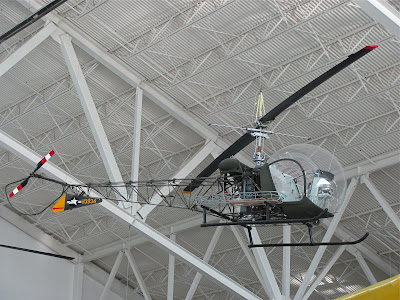 A lot of the planes had descriptive histories. This one also had a bit on the pilot... 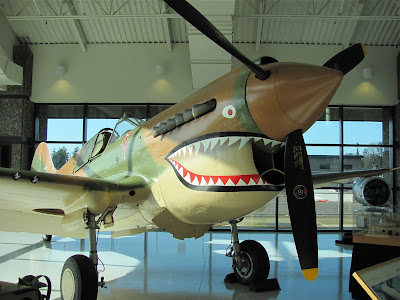 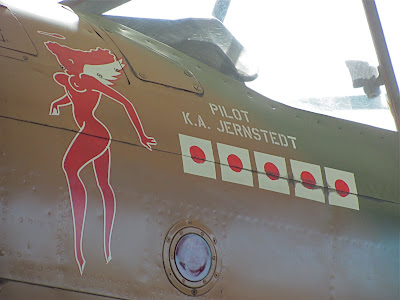 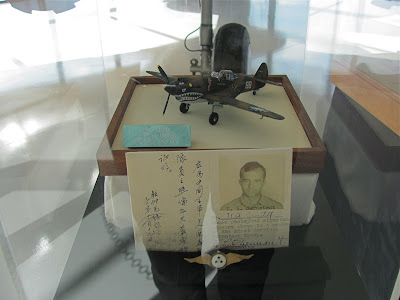 I thought the colors of this one was interesting even in the engine compartment.... 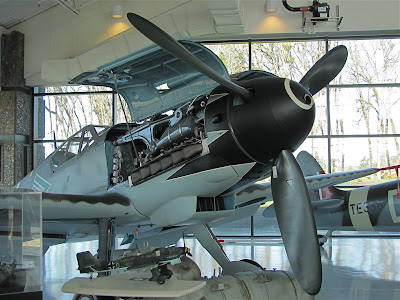 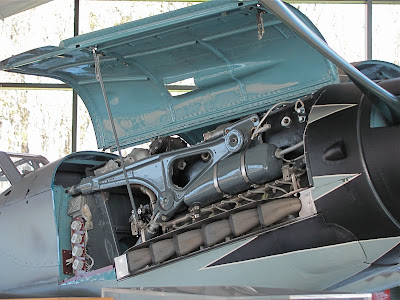 You can't have a museum without at least one motorcycle, right? They also had at least one other Ural but this was the nicest. 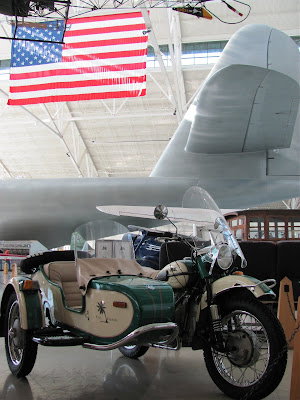 We managed to take over 300 photos on Saturday so I am going to divide this up into at least three sections as not to run on too long. Stay tuned for the second part of the Aviation museum......
- Au Revoir
"The desire to fly is an idea handed down to us by our ancestors who, in their grueling travels across trackless lands in prehistoric times, looked enviously on the birds soaring freely through space, at full speed, above all obstacles, on the infinite highway of the air." ~ Wilbur Wright
.
Posted by Trobairitz at 9:35 PM