.
Back in October, Troubadour learned of a presentation at European Motorcycles of Western Oregon, the BMW/Ducati dealer in Eugene. The presentation was by Rick Wallace, an instructor of crash scene safety for ASMI - Accident Scene Management Inc. A series of classes tailored to motorcycle riders and their specific needs in a crash. 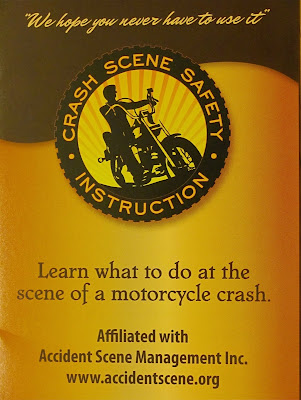 Our interest was piqued so we hauled butt to Eugene two up on the Tiger in the fog after work on a chilly fall night in November to listen to his presentation regarding a full day class he was holding in January. Rick Wallace is a former Firefighter/paramedic for 35 years and has taught and coordinated courses for EMTs and Paramedics. He has also taught CPR, First Aid and Community Emergency Response Team (CERT) courses for the public. He is a certified Lead Instructor for Accident Scene Management, Inc.
From the information we gathered at that presentation we decided it was a good idea to attend the full day class and proceeded to let all of our riding friends know about it and how to sign up. I think we got the word out at Saturday morning coffee, bike night and of course facebook. Within several days of the presentation we were signed up and ready to go. We were told to bring full gear as we would be wearing it for part of the class. 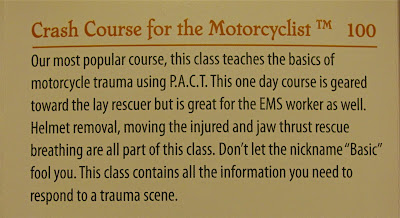 At the end of November we received an information booklet in the mail titled "A Crash Course for the Motorcyclist, by Vicki Roberts-Sanfelipo, RN," to review prior to class. A lot of the information was included in the prior presentation so I admit, I barely glanced at it. In my defense, Rick Wallace told us beforehand that he covered it page by page in the class.
This is how we found ourselves last Sunday in Eugene, at a closed dealership with 5 of our riding friends. There were 16 of us in the class but 5 worked at the BMW dealership and another and his wife had taken the class the day before in Tigard so were assisting. That left 9 actual participants and we numbered 7 strong; 3 gals and 4 guys.
The first part of the class was reviewing the basics of PACT. P-Prevent further injury; A-Access the Situation; C-contact the EMTs; and T-treat the injured with life sustaining care using the ABCSS of trauma.
We learned the ABCSS of trauma are: A-airways; B-breathing; C-circulation; S-shock; and S-spinal immobilization. 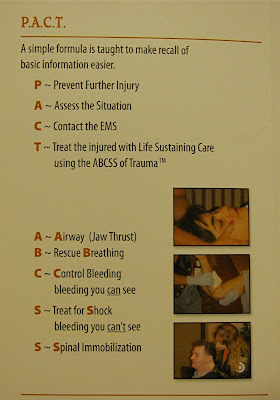 After reviewing we did some role playing. I've never been a fan of roll playing in classes and I almost didn't sign up for the course because of that aspect. I find I have a hard time with this type of interaction. It is like my brain doesn't function that way and I feel like a dork in front of all the people. Luckily I knew most of the people we were working with so that helped.
One of the things we learned was how to lower a rider to the ground while keeping their neck straight. Here is a few pictures of me lowering our friend Stacey to the ground. Stacey forgot her helmet so I let her borrow mine when needed. - in case you wonder why it matches my jacket. Notice the hand placement to keep the neck and spine aligned. 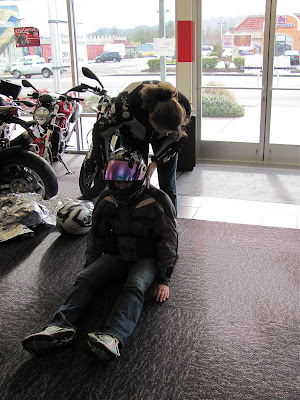 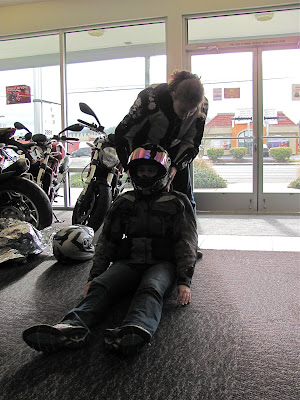 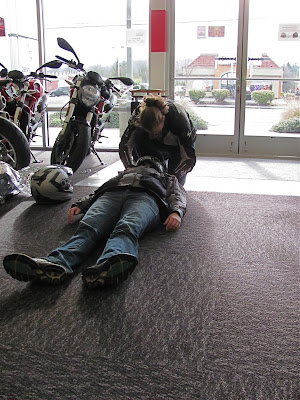 We also learned the proper way to remove a helmet. I found this to be the most valuable part of the class. Of course you only remove the helmet if absolutely necessary, i.e. if the person is unconscious and you need to performing rescue breathing or their airway is blocked and you need to clear it.
We also learned how to put someone in the recovery position and the correct way to roll someone over if you need to put an emergency blanket under them to move them. We then proceeded to learn the correct way to move someone, both by dragging on the blanket and by the armpit drag.
I learned that when Troubadour is in full gear and I have to drag him somewhere it can be accomplished, but (1) it isn't' a pretty sight; and (2) to drag him by the armpits I can only go as far back as I can straighten my legs and my butt hits the ground. Then I have to do it all over again about a foot or so at a time. But at least I know I can.
I learned that after crawling around and kneeling on the floors for a good portion of the day you will get rug burn on your knees through your jeans.
We were also taught what we should carry in a trauma kit as opposed to a standard first aid kit with band aids and acetaminophen. Things like gloves, waterless hand wash, cold compresses, emergency blanket, gauze, tape, burn gel, trauma shears, CPR mask, ace bandages, and triangular bandages to name a few. He showed us how to use a lot of the things he recommended. Here are our compadres and husband and wife team Erik and Dani trying things out. 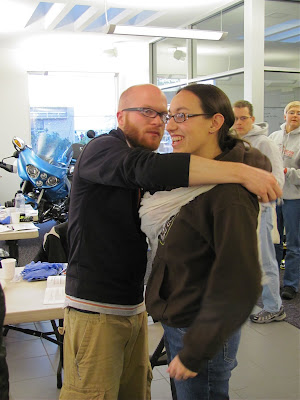 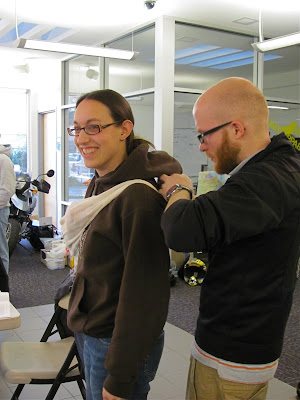 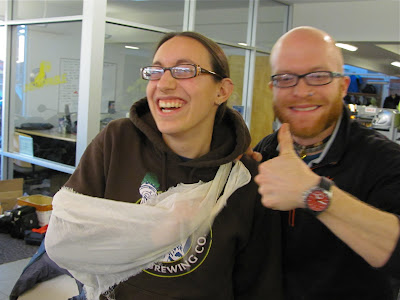 Here the owners of European Motorcycles, Scott and Madeline, along with their son, are trying to make a figure eight around Scott's shoulders to hold an imaginary dislocated shoulder in place. 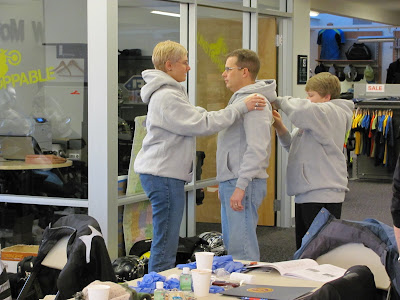 Here is Scott (on the left) and the instructor Rick Wallace (on the right) after a triangle bandage demonstration. 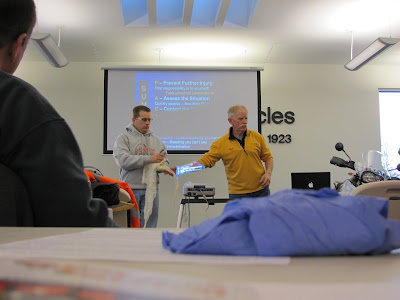 All in all it was a good day. We learned a few things we hope we never have to put to use. We each came away with a patch.... 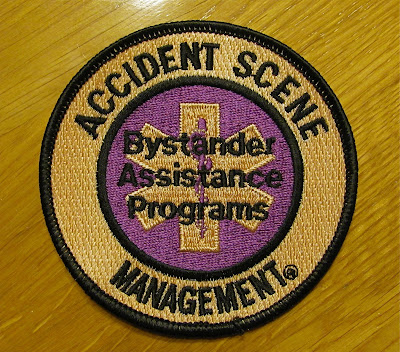 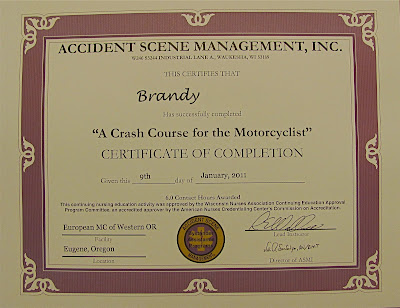 (Yes, I erased my last name in the photo)
More than what I have covered here was taught in the basic class. I just touched on a few highlights.
Rick Wallace is planning on teaching an advanced class in the series in the future. At this point, I don't know if I will attend or not. While we did get some great information last Sunday, I feel that some of the information taught clashed with what Red Cross is teaching and I found that he skipped around a lot as opposed to following the order of the procedures described in the booklet.
I did feel it was worthwhile and I am happy we participated and were able to attend with good friends and fellow riders.
-Au Revoir
"I am always ready to learn although I do not always like being taught." ~ Winston Churchill
.
Posted by Trobairitz at 10:39 PM